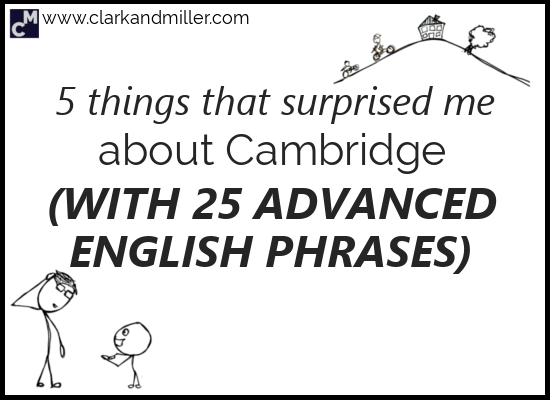 Today, you’re going to learn 25 new advanced English phrases while you read about my experience in Cambridge. Also check out 3 Things That Surprised Me About British Culture (With 23 Advanced English Phrases).

It’s funny how places can surprise you.

Last week I was in Cambridge — you know, the city famous for its very, very prestigious university, which has produced some of the world’s greatest minds:

What’s more, as an academic and a teacher, I’ve spent my whole career looking at books, certificates, posters, websites, stationery and T-shirts, all emblazoned with the University of Cambridge logo.

You’ll recognise it. Here it is:

I had a strong idea of what Cambridge would be like, but there were a few things that still surprised me.

Here’s why this post is a bit different.
In this post, instead of me telling you how something works, you’re going to read some very high-level English with lots of advanced idioms, phrases and words.

You can find out what these new words and phrases mean at the end of the post, but don’t check immediately! Try to guess the meaning of any new words first.

If you think you can figure it out, tell me in the comments. I’d love to see how you do.

1. There are bikes everywhere. 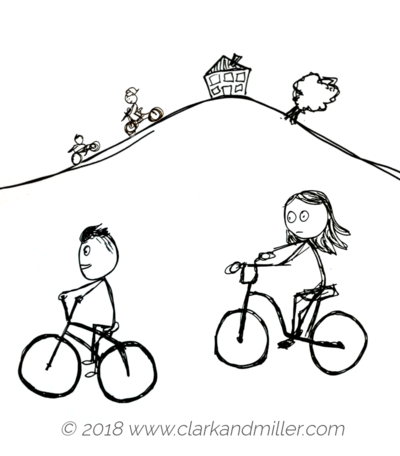 The first thing I did when I woke up on my first morning in Cambridge was take a look out of the window.

It struck me immediately.

Bikes. There were bikes everywhere.

Bikes and bike lanes — the roads were absolutely full of them. In fact, the bikes outnumbered cars by about four to one. It was fantastic.

I went out to find some breakfast and walk among this cycling frenzy.

I’ve been to Amsterdam a few times — a city with a well-earned reputation for being quite into their bikes. But there was a big difference here.

If you find yourself walking around Amsterdam, you need to be careful. Not because of pickpockets or mad, drunk English guys (though you do need to watch out for them, too), but because of the cyclists. They own the city! And they make sure you know it.

They don’t stop for anyone, and if you find yourself in the wrong part of any of the vastly complicated network of pedestrian crossings, pavements, cycle paths and roads, prepare to get shouted at and almost knocked over by someone on a bike.

I remember having a chat with a Turkish friend of mine who had lived in the UK.

He was telling me that England is the only place where you could be walking in the street without looking where you’re going, bump into someone and THEY’D be the one saying “sorry.”

So if it’s common to apologise for someone bumping into you, then it’s really not done to shout at someone from a bike.

OK. Fair enough. I should’ve expected this one, right?

I mean — it’s a university town, after all.

Also, the older I get, the more anyone younger than me looks like a kid. People who I think are 12 years old turn out to be in their early 20s. And teenagers? They just look like they should be watching Teletubbies and certainly not capable of doing all the weird and terrifying things that teenagers are capable of doing. 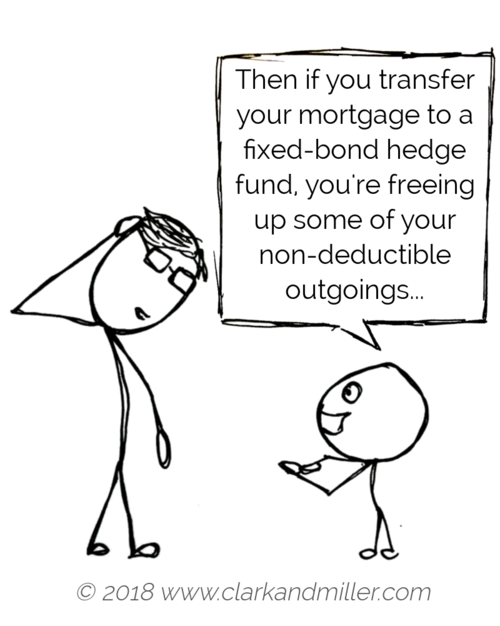 But that still didn’t stop me from being completely shocked by how young everyone (almost everyone) was.

Have you ever seen the film Logan’s Run?

It’s one of those 1970s dystopian sci-fi flicks. It’s set in a future where everyone lives indoors — the whole world basically looks like a shopping mall. What’s more, once you reach the age of 30, you have to die in a bizarre ceremony that involves wearing a cool mask and flying into the air. Except that they don’t call it “death.” In this reality, it’s called “renewal.”

What all this means is that everyone in the future is under 30.

It’s seriously weird — check it out here, if you dare.

That’s what Cambridge feels like (minus the weird masks and the flying).

There’s a bright side to it, though. I was called “sir” several times.

3. There are independent shops everywhere.

I mentioned before how institutionalised the UK is and how the high streets are dominated by chain stores and brand names, leaving no space for the little guy.

This is a general trend in the UK, and you’ll be lucky to find a high street in the country with at least half of the stores independently owned.

I was impressed — some parts of the city seemed to consist entirely of independent shops. There was a shopping mall area, but that was nicely tucked away from the picturesque streets of the old town.

I guess it’s a strong indicator of how wealthy the city is. Independent shops are usually pushed out by their fierce multinational competitors in other cities.

However, if you’ve got a city full of people with a large disposable income, they’re more likely to be happy to splash out on something for a more individual and less sanitised shopping experience.

Also, the stuff you find in small shops is always way more interesting than in the big chain stores.

Unlike Oxford, the City of Cambridge was built around the university. The uni came first and the city later. Apparently, the idea was to copy the style of the University of Oxford, so a lot of the architecture is actually the same.

But how weird, right? A city that’s built around a university?

It basically means that the university IS the city.

It means that everything is for the students: the shops and restaurants and bars and cafes — all aimed at the students.

Even the churches, with their questionable punctuation skills, wanted a piece of the action.

5. Power in the making

When I was in Cambridge, I spent some time with an old school friend who’s now a lecturer at the university.

I also met one of his protégés — a go-getting, ambitious young woman.

Normally, because I’m kind of a smart guy, I feel quite comfortable in intellectual company, talking about big subjects and pondering the deeper meaning of things. I enjoy it — it’s fun!

But with this person, I simply couldn’t keep up. She was thinking and talking at about a million miles an hour, covering lots of territory in a small period of time. 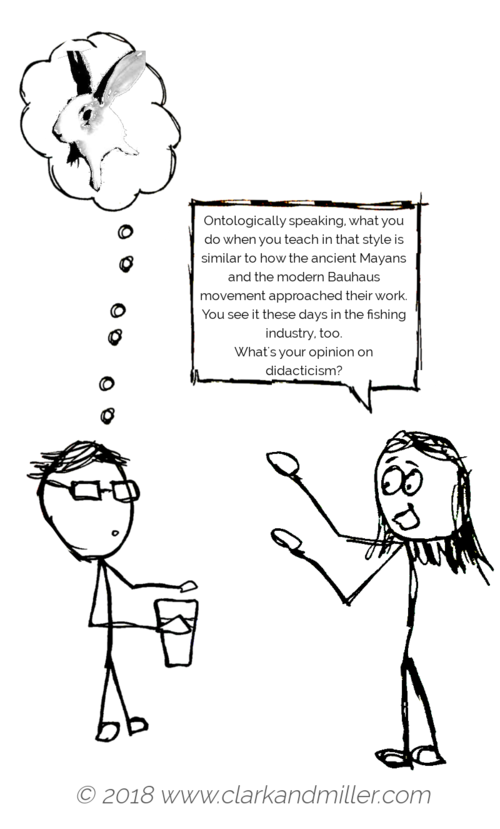 But it wasn’t just her. I spent a lot of my time walking around town among the young and intelligent there eavesdropping on their conversations.

I was struck by how confident and smart everyone was. Everyone seemed so sure of themselves. What’s more, I realised, these were some of the world’s future leaders.

OK — there you have my rather random impressions of one of the world’s most famous cities.

But what about all that new vocabulary?

Here are all the advanced English phrases in bold again. Could you work out the meaning from just reading the post?

If you think you know what they mean, tell me in the comments!

Or if you want to cheat, click here for all of the definitions.

It struck me. – I had a strong reaction to it.

Bikes outnumbered cars by about four to one. – For every car, there were four bikes.

have a well-earned reputation for something – everyone knows you for this thing — and for good reason!

excessive politeness – so much politeness that it’s kind of ridiculous

It’s really not done. – This is not the polite way to do something.

general trend — the direction something is generally changing towards

fierce multinational competitors — the big, aggressive companies that will stop at nothing!

disposable income — the money you have left after you’ve paid the rent, bills, etc.

splash out on something – spend more than you need to — as a treat!

marketed to — advertised to

a piece of the action — a part of a big opportunity

covering lots of territory — talking about lots of different topics

eavesdropping — listening to other people’s conversations without them noticing

sure of yourself — confident