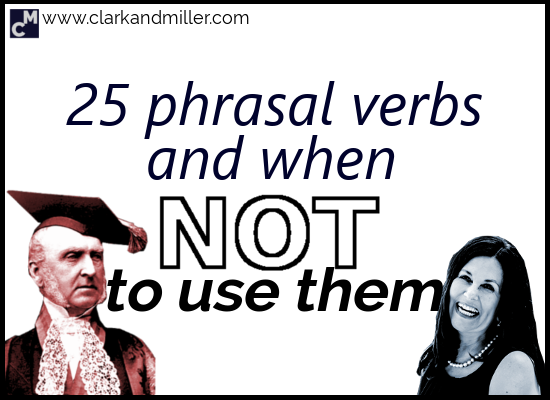 Here’s a piece of information that will really annoy you:

Did you know that for (almost) every phrasal verb, there’s a “normal” verb you can use instead?

Annoying, right? I mean, why are you learning all these stupid phrasal verbs?

Why did you have to learn “take up,” when you could just as easily use “start”?

Why did you have to learn “give up,” when you could’ve just gone for “quit”?

Well, the answer is simple.

We don’t actually have to learn phrasal verbs to speak decent English.

But, like many other things in English, we need to use phrasal verbs (and other multi-word verbs) to sound like we’re human and not from the planet Weird Robot.

Phrasal verbs (like “give up”) make us sound more natural.

These verbs are sometimes called “Latinate equivalents,” which doesn’t sound much fun. So I’m going to call them “brother verbs.” Much easier to deal with, right?

I’m going to put these “brother verbs” into three categories, ranging from not necessarily formal to extremely formal.

In the first category, the phrasal verb and its “brother verb” have about the same level of formality.

I’m putting them on “zero” on this formality-o-meter that I just invented:

“I gave up smoking.” — fine in any situation

“I quit smoking.” — fine in any situation

Sometimes, the “brother verb” is the best choice in more formal situations, while the phrasal verb is less formal.

These fall at “one” on the formality-o-meter:

“Please come over sometime.” — fine with friends and family

“Please visit sometime.” — much more appropriate for when you want to invite the CEO of your company for dinner. Or the Queen of Sweden to watch the football.

And sometimes, the “brother verb” is so formal that it would just sound weird in almost any situation. This is when we almost always use the phrasal verb instead.

I’m putting these at “two” on the formality-o-meter:

“She told me off for throwing pancakes at the president. Then she laughed.” — fine with almost everyone. Except for the president, of course.

“She berated me for throwing pancakes at the president. Then she laughed.” — Too weird! This is far too formal.

So in short, “two” on the formality-o-meter represents the sort of “brother verbs” Charles Dickens’ schoolmaster would have used, and “zero” is Carmen hanging out with her friends. 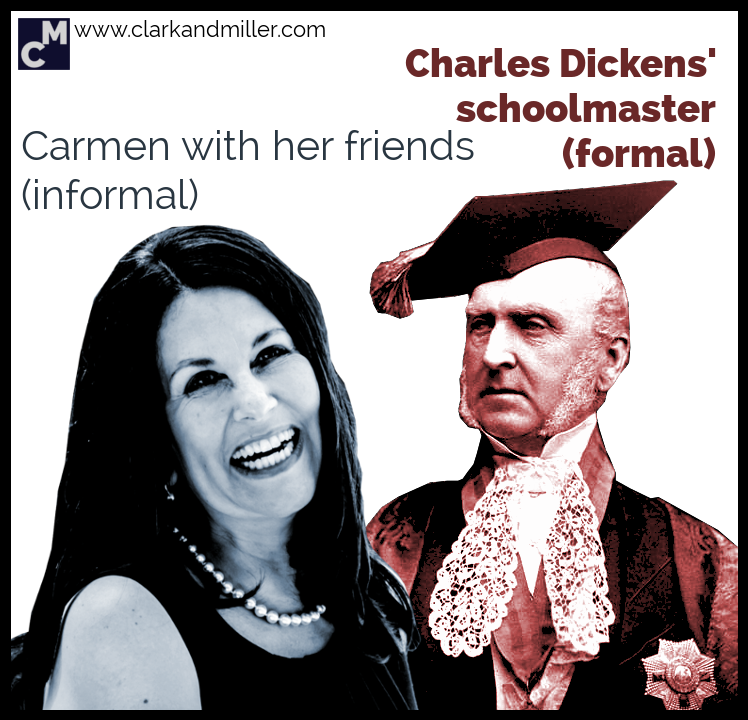 So let’s look at 25 different phrasal verbs and their “brother verbs.”

As I mentioned above, the phrasal verbs in this category are fine in any situation — that means that you can use either the phrasal verb or the “brother verb” whenever you like.

“Very sorry, Mr Codd. I realise you’re in the middle of a meeting, but can I cut in for a second, please?”

“I was telling my joke about giraffes — you know, the good one — when she just interrupted right in the middle! So rude!”

look up to | admire

“I really admire her. She has almost nothing, but she still goes out and helps people.”

“When he was a kid, he didn’t really have anyone to look up to.”

You can set up events (or arrange them):

“Shall we set up an appointment for 9 o’clock?”

You can set up rooms (or arrange or prepare them):

“When we arrived, the meeting room wasn’t set up.”

These are particularly useful when you have something you really need to talk about in detail.

Perhaps you’ve got a big decision to make:

“We really need to discuss the pros and cons of investing in a new elephant.”

Or maybe you’re having problems with a friend:

“Can we just meet up for a coffee and talk things over? I’m sure we can sort it all out.”

Anything you can cancel, you can also call off.

“Sorry, we cancelled the meeting. Everyone’s off sick.”

“They called it off because of the rain.”

Or maybe something more informal:

“Sorry — I’m going to have to call off our dinner. Jasper’s ill, and I need to take him to the doctor.”

We all know this one, right?

“I’ll never give up living in the garden shed. It’s my lifestyle, man!”

OK. Most phrasal verbs fit into this category.

Remember — you have to decide when to be formal and when to be more relaxed. This isn’t something I can teach you.

But I can tell you one thing.

Most English learners I’ve talked to tend to sound a little too formal.

This is probably because, as a learner, you prefer to “play it safe” and go for the “brother verb.”

That’s fine, but as you get more confident, take my advice: start experimenting with the phrasal verbs and see what kind of reaction you get.

When you use phrasal verbs, you sound more friendly, and you might be surprised by the positive reactions you get from people when you use them.

“He asked her to marry him 7 times. She turned him down each time!”

“I’m afraid my application to the Rhino Football team was rejected. It says I’m too big-boned.”

“I hate to bring it up, but you’re not wearing any trousers. Again.”

“They said they would raise the issue in Parliament. They never did. Typical politicians.”

give back | return (an object)

“Hey! That’s my dog! Give it back! Also — why would you take someone’s dog? Weirdo!”

“Sorry, can’t come out tonight. I need to look over my visa application — make sure I haven’t made any mistakes. You know what they can be like.”

“After examining the contract in detail, we’ve decided to accept your offer.”

“Sorry, but I’m going to have to put off the cinema trip till Friday. The babysitter’s cancelled again.”

“Can’t we postpone the meeting till Monday? It’s already 6 p.m. and everyone would like to go home.”

“I know it’s difficult now, but you’ll get over her. You were only in a relationship for a couple of weeks.”

“Tom’s been missing school again? OK — I’ll look into it.”

“The police are investigating a series of recent giraffe sightings in the north of Scotland.”

put up with | tolerate

“Can’t the neighbours shut up? I don’t know how much more I can put up with.”

“I’m afraid these are the kinds of mistakes that, as a company, we just can’t tolerate. You’re fired!”

“Yeah, my parents are away all weekend. Wanna come over?”

“During her trip to Australia, the Queen will be visiting the largest kangaroo farm in the country.”

“Sometimes I wonder how I get by on such a terrible income. But I do it somehow.”

“Without enough water, these small desert animals will be unable to survive.”

“Sorry — don’t worry about him. He always sings at around this time. Go on.”

“As soon as he left the pub, he just passed out. Right there in the street.”

“The media reported that the tennis star had lost consciousness for several minutes following the incident with the rhino.”

turn up | arrive (late or unexpectedly)

“Then, as usual, Batman turned up at the last minute and saved the day. Batman’s awesome!”

“The train is expected to arrive at the station 14 minutes late. We apologise for any inconvenience.”

OK. In this section, we’re going to look at phrasal verbs with “brother verbs” that are so formal that they just sound weird in almost any situation.

This is when using the phrasal verb is probably safer than using the “brother verb.”

So when would we use these verbs?

These verbs are so formal that we usually only use them in things like academic English and formal writing. You might also see these kinds of words on signs, and you might hear them from formal, institutionalised figures like police officers and judges.

What I’m saying here is that these are unusual verbs, but very occasionally, in certain formal situations, they are the right ones to use.

“She told her daughter off for throwing a milkshake at the dog.”

“When children are berated, they tend to show various forms of anxiety.” — academic essay

“How can you write about the holiday and leave out the bit with the dinosaur on the bus?”

“Your application was rejected because important information about your previous work experience was omitted.” — formal rejection letter

“Hey — put out that cigarette! It’s no smoking here.”

“The number of fires extinguished in the downtown area has doubled since last year.” — newspaper article

cut down on | curtail

“You’ve really got to cut down on those biscuits. What is it — 4 packets a day now?”

“The propaganda was chiefly used to curtail freedom of thought in the state.” — magazine article

make sure of | verify

“I just need to make sure of your address. Can you write it down here, please?”

“Please verify your name and password before continuing.” — online instructions

“You wanna play first? OK — go ahead. I’m still going to beat you!”

“Before we proceed with the meeting, I’d like to make a small announcement.” — formal meeting

Are there any other phrasal verbs that have confused you in the past?

Let me know in the comments. I’d love to help you out — hey, that’s what I’m here for!

Meanwhile, if you found this post useful, BE AWESOME AND SHARE! It’ll make me happy and, more importantly, you’ll be spreading knowledge.

And that’s an awesome thing to do, right?