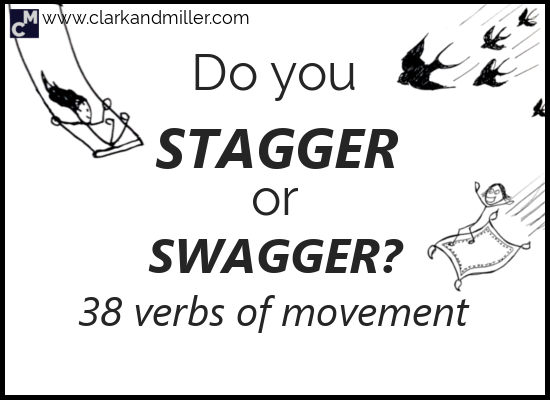 There are loads verbs of movement in English.

Think about how you walk, how you run, how you move things around and how things move without you even touching them.

There’s a lot of movement out there — be careful!

When he walks, his feet never leave the ground. He’s shuffling.

“Shuffle” can also mean “mix” when you’re talking about cards.

He’s had one zombie cocktail too many.

He’s trying to walk, but he can barely stay vertical.

“Stagger” also has another meaning.

If you have too much work to do, don’t do it all at once!

She was right here.

She ran away suddenly — very suddenly.

Horses can also bolt, and there’s an idiom about it: to close the stable (“horse house”) door after the horse has bolted. It means “try to prevent a problem when it’s already too late.”

The birds are singing; the sun is shining!

What a beautiful day.

Makes me want to skip to work.

“Skip” means “walk with a little jump on each foot. Like you’re made of air.”

Must be the fastest!

“Sprint” means “run as fast as you can.”

Ways of walking with attitude

Technically, this is the word we use for soldiers all walking at the same time in the same way — to show off how organised and scary the army is.

But if you’re walking quickly in a determined way — like when you’re angry, or when you want to feel like you own the room — then you march.

“He just marched in here and stole my sandwich. I was eating it!”

You know those guys who walk around in an arrogant way?

Think of macho guys at the gym.

“Swagger” is similar to “strut.”

It’s basically an arrogant walk, but can be a little more aggressive.

I avoid people who swagger.

Ways of walking in a limited way

It’s kind of like walking — but on your knees as well as on your feet.

It’s what babies do.

Walking. But with only one foot. Not two.

So … kind of jumping, I guess.

The act of getting down quickly because some maniac has decided to start having fun with the cannon again.

I wish he wouldn’t keep doing that.

We also have the phrase “Look before you leap.”

It means “Don’t do anything risky without thinking about it properly first.”

You do it when you see someone play the piano amazingly.

Or when you’ve seen someone play the piano terribly, but because they’re only four years old, you don’t want to hurt their feelings.

Close it into a fist.

Then punch the bag.

Try to only punch the bag, though, yeah?

I don’t know what he’s doing.

I don’t know where we are.

This means to hit something lightly.

Right now, I’m tapping my finger on the keyboard to create these wonderful words you’re reading.

You can also tap on the window for no reason whatsoever.

I tried to draw a picture of a cat swiping, but it turned out like, uh, this:

So here’s the internet fixing it for you:

Ways of moving something

Hold something. Then let go of it.

It means “stop talking about this before I go mad.”

Take a metal pipe and try to break it.

You probably won’t break it.

But you might bend it — move it so that it’s not straight anymore.

Also, you can “bend the rules.” Not quite break them … but push them to their limit.

This means “quickly turn something over.”

Like when that gorilla flipped over your uncle’s car on safari once.

Or when you flip a coin to decide who has to tell Humphrey the bad news again.

Also, “flip out” means “go completely mad with anger.” Like Humphrey when he gets the bad news.

This basically means “push something sharp (but not too sharp) into something else.”

So you can poke someone (with your finger) as a friendly gesture (like on Facebook) or as an aggressive one (see the picture).

You can also poke someone with something.

“He poked the snake with a stick to make sure it was dead.”

Hold it. Pull it up.

Let’s make sure this thing goes as far as possible!

Kids might propel small pieces of paper across a classroom.

Does that really happen? Or is it a myth, like the elephants standing on top of each other?

Moving something side to side very fast.

You can shake a cocktail shaker.

Or you can shake your fist at the moon if you’re feeling particularly mad.

OK. This may not be entirely clear from the picture.

It hits the ground.

Then it goes up again.

The whole sport of basketball is completely based on this phenomenon.

There’s also this rather ridiculous song. (Warning: loud and sudden.)

When things move beautifully through the air.

Or the way birds move when they’re not flapping their wings.

When you lift something, you move it up.

If something lifts by itself, then it rises.

Or bread in the oven.

Think about how your pen keeps rolling off the table. Annoying, isn’t it?

We can also roll something.

Or those delicious stuffed vine leaves:

You can also slide something.

Have you ever seen people play curling? When they slide this big metal thing that looks like it belongs in Star Wars along the ice.

And just keep going up!

Think about how a rocket takes off.

Or the opposite of what the global economy did in 2008.

“The ballerina spun and spun and spun. No one knew when she would stop. Or whether she wasn’t, in fact, a robot.”

Or you can spin something:

“The girl spun the bottle once more, wondering whether or not she was a complete teenage cliché from the ‘80s created by a writer with no idea about what teenagers do these days.”

Think about how the trees move when it’s windy.

They creak and sway, right?

They move back and forth in the wind.

Or how a ship moves on a windy day.

The difference between “swing” and “sway” is very small.

They both involve moving backwards and forwards or from side to side.

However, when you swing, you’re usually moving from an unmoving point.

However, if you think about the plants swaying in the wind or the ship swaying in the storm, the movement is more unpredictable and less of a straight line.

It’s a small difference, but under it all, it’s all about “controlled” versus “random and organic.”

Look out for the rabbit in the middle of the road!

“Swerve” means “make a sudden turn” — usually to avoid something.

This is usually used for birds. It means “move downwards from the air quickly.”

This means “fall in a clumsy and chaotic way.”

I usually think of rocks tumbling down a mountain.

Or someone tumbling down the stairs.

This is such a pleasing word to say.

This means “move from side to side randomly.”

Or sometimes we use it to show how unsteady something is:

“I still wobble when I try this yoga pose.”

OK. There we go: 38 verbs of movement in English.

Can you answer these two “Have you ever … ?” questions:

26 thoughts on “38 Verbs of Movement in English”

﻿
We use cookies to ensure that we give you the best experience on our website. If you continue to use this site we will assume that you are happy with it.Ok