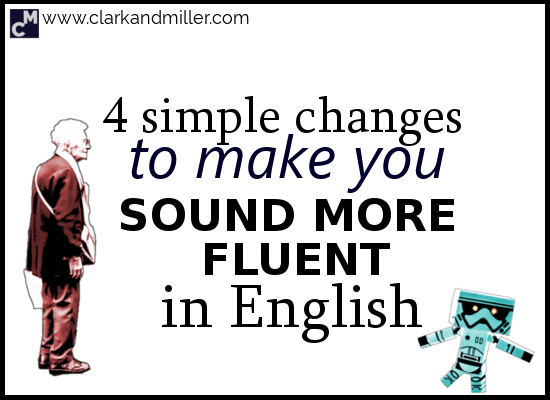 You’re going to learn 4 little changes you can make to your English right now to sound more natural. Also check out 2 Things You’re (Probably) Doing That Make You Sound Unnatural in English.

You can actually make a few small changes to your English and suddenly sound much more fluent.

That’s because sounding fluent in English is a bit like a secret password. If you use these techniques, it’s like you’re giving a signal to the listener that you’re one of them — that you’re an expert English speaker, too.

These techniques are the “magic brush strokes.”

Today, let’s look at three of the most common ones.

I want to talk about this one first because it’s very simple but probably makes the most difference between sounding like a robot and sounding human.

Not sure what I’m talking about?

OK, let’s look at a robot and a human having a nice conversation about vegetables. 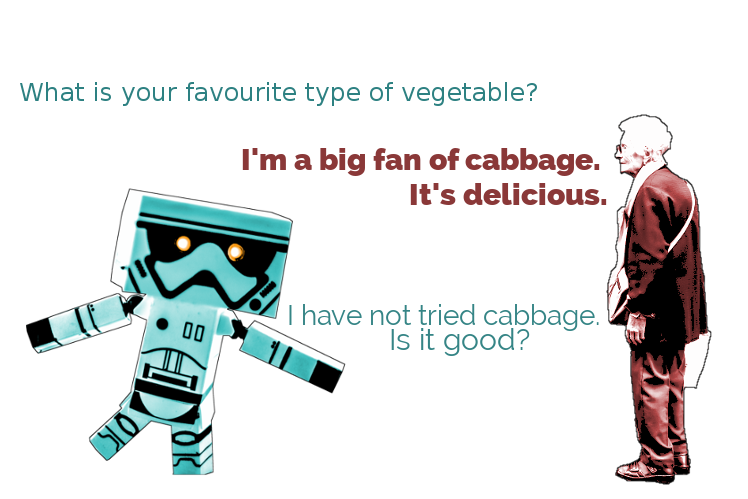 OK. So what’s the big difference between what the robot is saying and what the person is saying?

That’s right! The robot is pronouncing each individual word.

What he needs to do is use contractions.

What are contractions? They’re two words shortened to one word.

When you don’t use contractions, it sounds really, really unnatural, but for some reason, even the highest-level learners do this.

So how to fix it? Let’s look at a few examples. 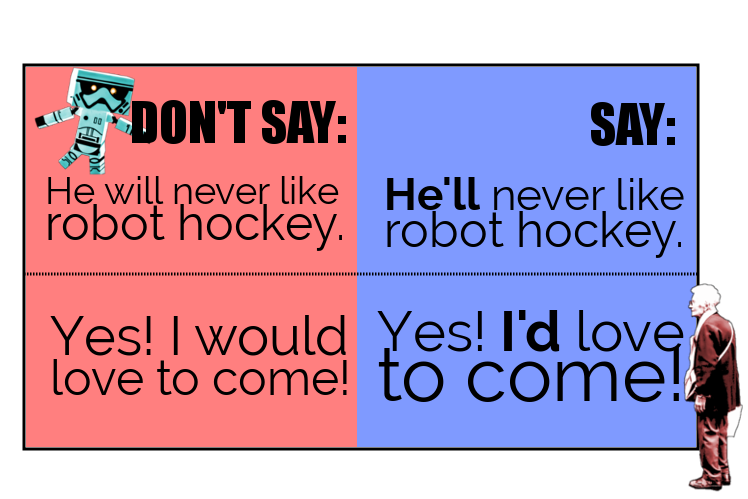 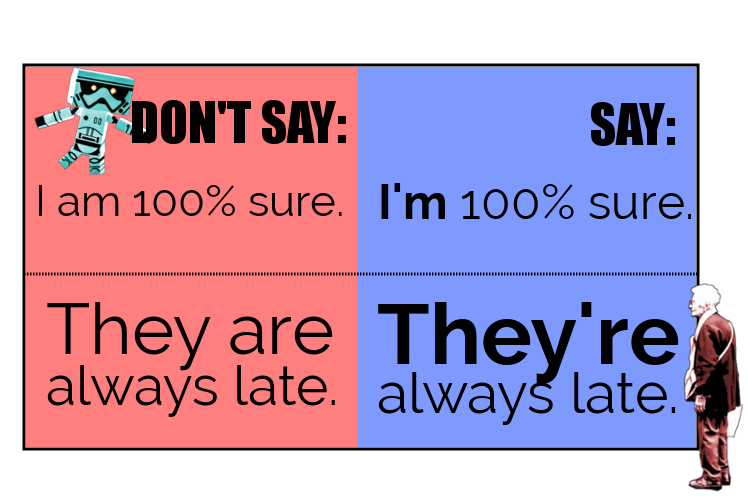 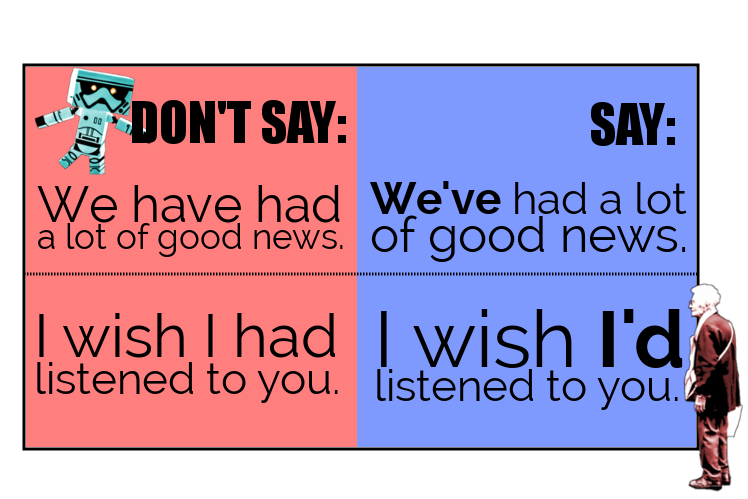 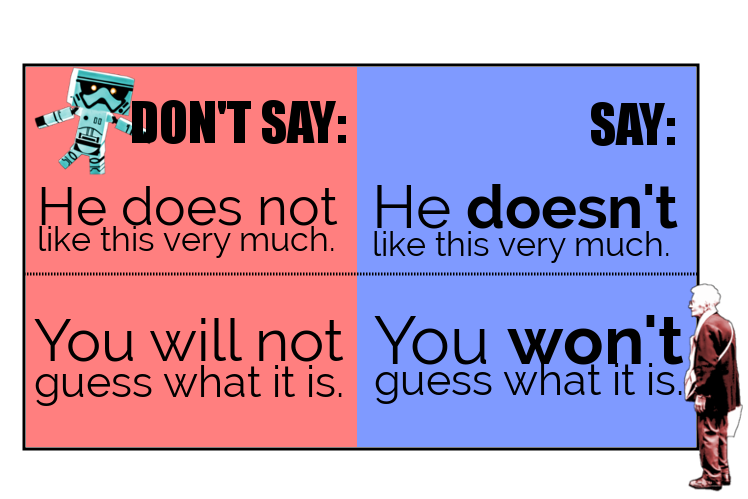 It saves time, it makes you sound more fluent AND it’s easier! What’s not to like?

“But what about formal English and business English?” I hear you ask.

And that’s when I tell you, “Yep, even in formal and business settings, we often use contractions.” Really — try to use them whenever you can when speaking.

And then you say, “Thanks, Gabriel. By the way, your hair looks excellent.”

Probably. That’s probably what you say next.

Anyway, there are generally three situations when we don’t use contractions.

– He is enjoying my game. He loves spiders.

Another is for short answers:

– Big Mike, are you really enjoying the spider game?

We also tend not to use contractions in formal writing.

So showing agreement is an important part of conversation.

Now, I’m going to give you two simple phrases that you can use to show agreement and make stronger social connections.

You might think you know these phrases, but I want you to make sure that you’re using them correctly. Because so many people get these wrong.

Here’s another conversation between the human and the robot. 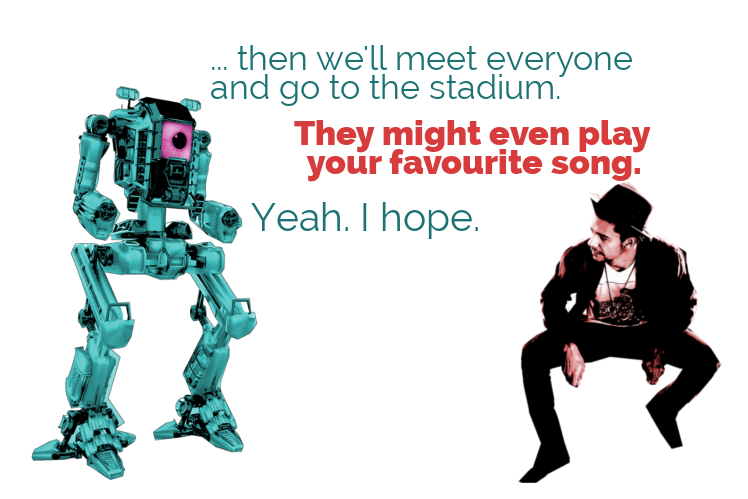 Did you notice the problem?

Yep — the robot is using the phrase “I hope.”

That “so” makes a huge difference to how fluent you sound.

It’s also the same with the verb “think.” 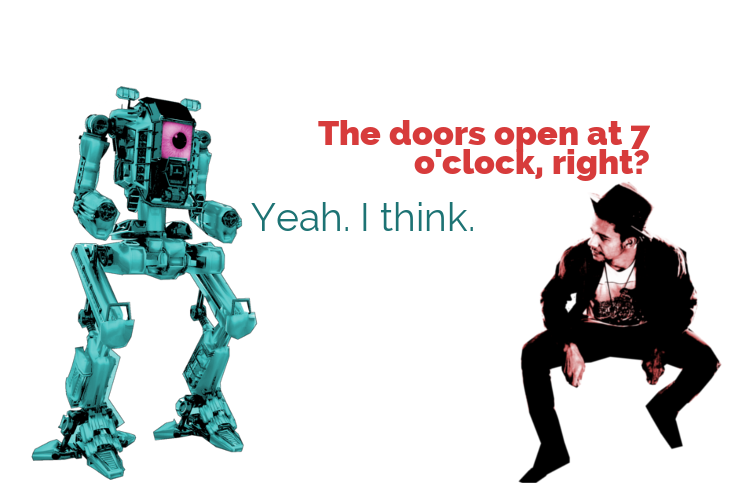 OK. So we can reprogram the computer to use “so.”

But he’s about to make a mistake that so many English learners make. 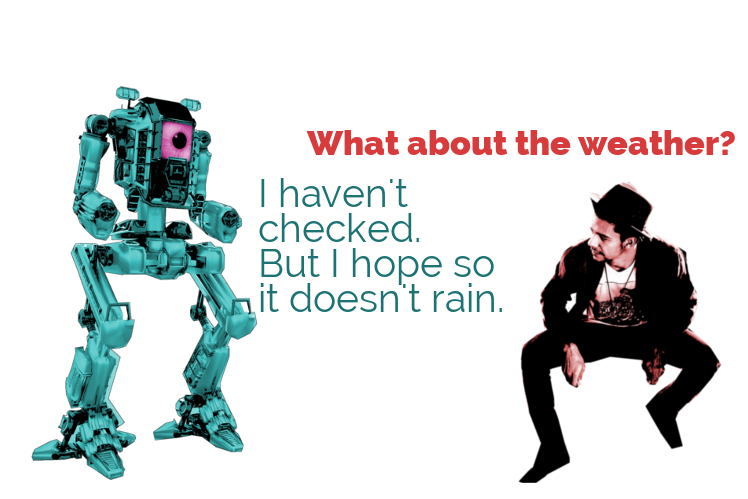 If you want to use a whole sentence, don’t use “so”!

OK. So here’s the guide. 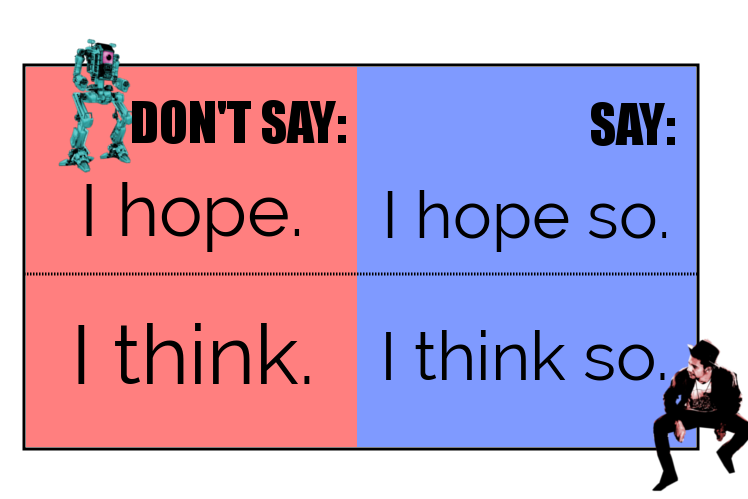 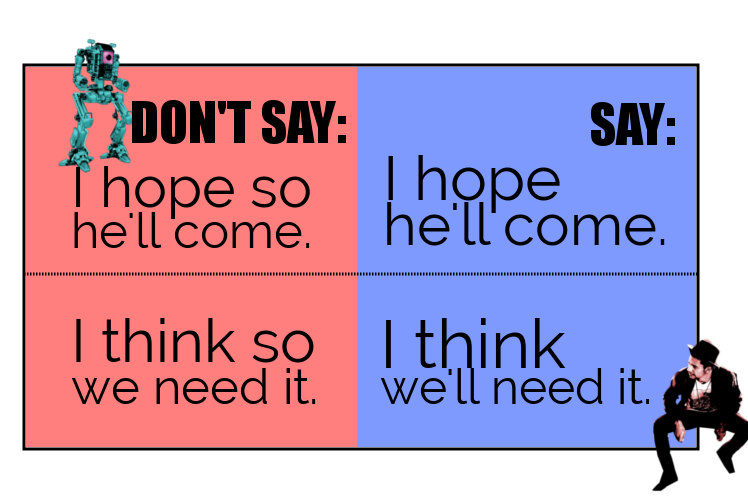 Do you remember that I was talking about “secret passwords” in English?

If you use certain phrases, the listener will understand that you “get it” — that you’re part of the expert English speaker club.

There isn’t really an actual club, with a membership and a free glass of sherry when you arrive. And a butler who’s also an elephant. Nope, sadly that club doesn’t exist.

So what are these phrases?

These phrases actually don’t really have any meaning at all. They’re fillers.

Let’s look at our robot one more time.

This time he’s having a few problems describing things.

He can’t find the right word to describe something, so he wants to compare it with something else: 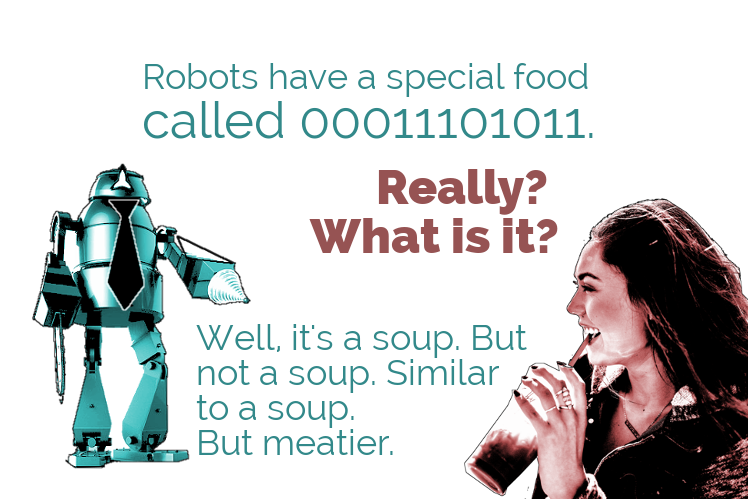 Did you notice that the robot’s wearing a tie here?

That’s because what he’s saying is actually perfectly fine in formal or business situations.

But this robot’s at a party, and he needs to relax a bit.

We can use these phrases (“kind of like…” and “sort of like…”) to describe nouns and adjectives:

It’s kind of like soup but meatier, if that makes sense.

It’s sort of like flying. But with more gravity. It’s hard to explain.

We can also use these phrases for actions and adjectives, but if we do, we drop “like.”

He kind of said it and sang it at the same time.

The plane didn’t really fly. It sort of floated in the wind.

These phrases are really useful for situations that are kind of abstract and tricky to explain. When you use them, you’re inviting the listener to use their imagination a little. 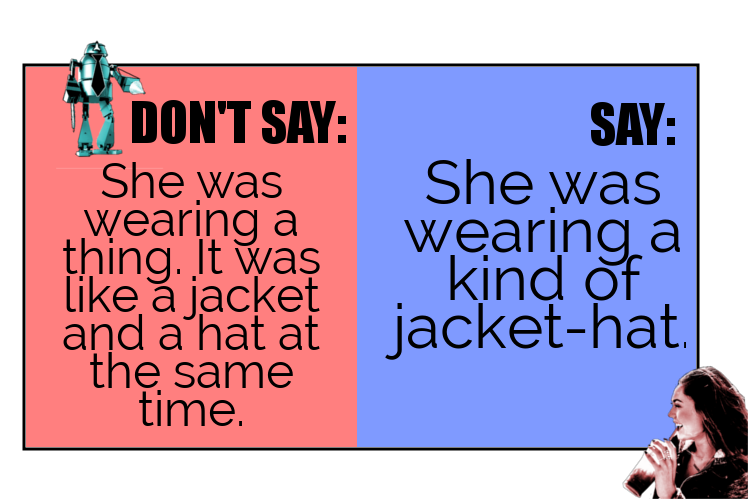 OK. So we just saw how our robot had problems with something difficult to describe.

But, when you’re speaking, sometimes you just need a little time to think — to process what you’re talking about.

Here’s how our robot deals with it: 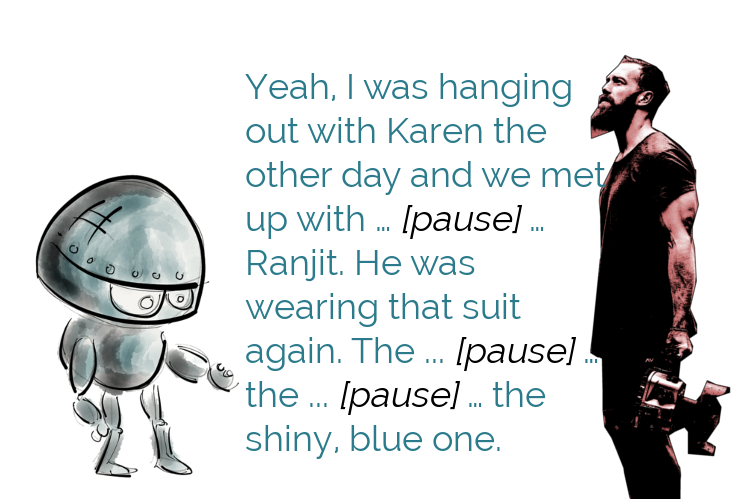 Right. He just stopped in the middle of the sentences.

If you just stop speaking without making any sound, the listener might think you’ve finished. Or that you’re suddenly distracted by his enormous beard. (It happens to this guy a lot.)

So it’s good to make some sort of sound to signal that you’re just thinking and that you’re going to finish that sentence.

But I would also recommend using “you know…” in informal situations.

This phrase does two things:

So the technique is quite easy. When you’re processing information mid-sentence, just say “you know.” 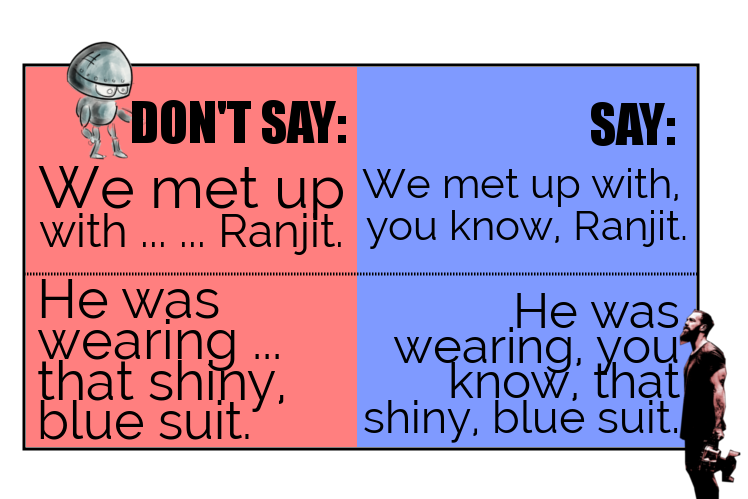 OK. So now you have the power to push your English to a much more fluent place.

What else do you think makes people sound more fluent in English?

Tell me in the comments, and we can have a kind of conversation about how … you know … how we improve our English.

Did you find this useful? Do you know any people (or pandas) that might also benefit from this? Then BE AWESOME AND SHARE! Spread the knowledge!