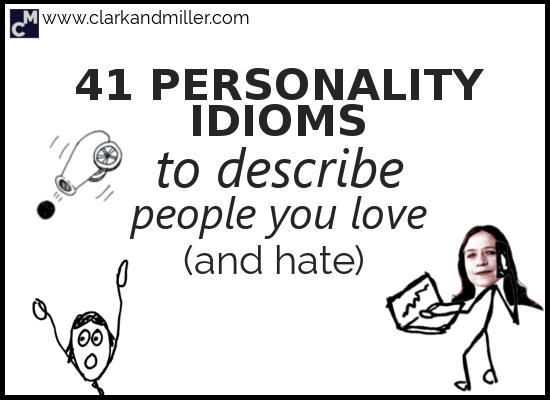 Today I’m going to show you 41 personality idioms to describe people’s character. For more idioms, check out Do You Know These 8 Very British Idioms?

So let’s look at some personality idioms.

Let’s start with the positive people. The people you love spending time with.

The ones you might go on holiday with or start a book club with.

The ones you’d call when you’re stuck in the middle of nowhere in a thunderstorm having missed the last bus in a country where you don’t speak the language.*

Nik has realistic expectations. He doesn’t try to do anything impossible and doesn’t dream about things he can’t do.

So you’ve decided to marry a pillow and start an orchestra with no instruments?

Most people would probably walk away from you when you told them that.

Not Nik. He’s got time for any sort of idea — no matter how weird.

He’ll also tell you exactly what he thinks about your pillow marriage and instrumentless orchestra. Even if you won’t like it.

So you’ve been friends with Nik for years now.

You think you know everything about him.

Then one day he casually mentions that The Beatles took him on tour for two years back in the ‘60s because Ringo really liked the way he set out the drum kit.

Nik’s a dark horse. He has a colourful and interesting past that you didn’t know about.

He doesn’t get stressed and is pretty relaxed most of the time.

This is basically the same as “laid-back.”

If you go to a party with Freya, you won’t see her much. In fact, no one will.

But everyone will see her a bit.

She loves going from person to person, trying to talk to everyone.

Moving around the room like some sort of butterfly — a social one.

The life and soul of the party

Have you ever been at a social gathering or a party that was just dead?

No one was talking to each other and everyone was looking at their phones.

Then someone arrives who just completely brings everything to life.

Someone energetic, lively and who makes everyone want to talk.

That was probably Freya — always the life and soul of the party.

So she talks to them a lot.

She’s also a good laugh — simply good fun to be around.

Yes, I know. It’s pretty weird to call someone a card.

But it’s also pretty weird to call someone an egg, too.

But what does it mean?

She might decide to start singing while you’re in the metro for no reason.

Or she has strong beliefs about how humans actually come from Mars, and we’re just here on a sort of holiday.

A jack of all trades

Delia is very skilled. She can play the banjo quite well, fly a plane quite well, create a reasonable website and speak pre-intermediate Mandarin, Italian and Swahili.

She can do a lot of things quite well.

This idiom can sometimes be used negatively, especially in its fuller form: jack of all trades (and master of none).

This means that, sure, she can do all of those things quite well, but there’s nothing that she can do very well.

There’s a reason why Delia is successful.

She notices the details.

She can think and make decisions quickly.

If Delia wants something, she just goes and gets it.

Because she’s a go-getter.

Would you be surprised if I told you that I could find way more negative personality idioms than positive ones?

I think this makes sense.

When we want to say something nice about someone, it’s fine to be direct and just use an adjective.

But if we want to say something bad about someone, it’s easier to be indirect and use an idiom.

It might also save us from getting into trouble when we’re criticising people who are loose cannons or who have a short fuse.

Not sure what I mean? Then read on!

Thanks to the internet, we get more and more Tonys.

He just sits at home and talks about how bad your new poem is. Or how you shouldn’t have used the piano in your new song.

But he doesn’t write poems or songs. He just criticises other people who do.

Set in his ways

He does things the way he wants, and he won’t do them any other way.

This one simply means “stubborn.”

He’ll always believe that the world is flat. It doesn’t matter how much evidence you give him — he won’t change his mind.

Do you remember how Nik would listen to your radical ideas about starting an orchestra without any instruments?

Even if he doesn’t agree, he can still listen to your ideas.

Tony won’t listen to any ideas that he doesn’t understand or like.

He thinks he’s the best.

Better than all the rest.

He also thinks he knows everything — so much that he’s just really annoying.

Be careful with this one, though.

First of all, it’s really British.

Secondly, it’s really not polite. “Arse” is the British English version of the American “ass,” which I’m not going to explain here. I’m sure you know what it means. If not, then Google it … but wait until you’re home first, yeah?

For some reason, we have a lot of idioms and words to describe people who hate spending money. Especially in British English.

Now the Brits have a bit of a reputation for being the kinds of people who hate spending money.

So I guess the language is reflecting that.

Anyway, a cheapskate is someone who hates spending money.

If his washing machine is dying, he’ll wait until black smoke is coming out of it before he buys another one.

I once had a flatmate who hung his tea bags out on the washing line so he could reuse them and who went all the way to Poland in order to visit the dentist because it was cheaper.

He never came back.

This one comes from Charles Dickens’ character Ebenezer Scrooge from A Christmas Carol — someone who hates spending money.

We can also say “tight-fisted.”

This is more about being ungenerous.

Like when it’s Tony’s turn to buy the drinks, he’ll just refuse.

You’ll be walking down the street with her, and she’ll just start knocking on someone’s front door and then immediately run away.

Or she’ll see a building site, and the first thing she’ll do is go in and start climbing all over it.

This is more or less the same as “tearaway.”

A cannon is one of those massive old guns: 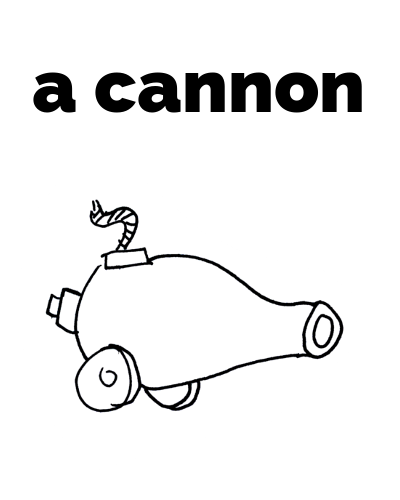 Imagine a loose one: 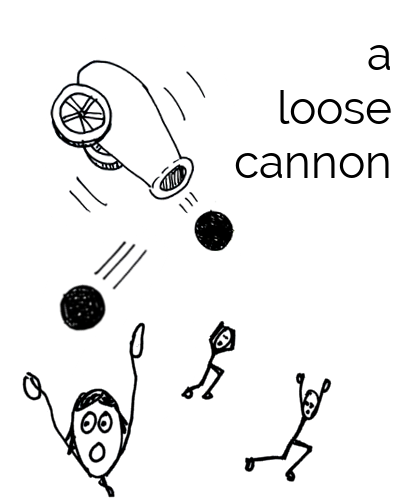 Everyone in Sibel’s family joined the family law firm. They’re all corporate lawyers making millions a year and living off champagne and caviar.

Except for Sibel. She lives in a tree and makes masks.

She’s the black sheep of the family — the odd one out.

This is not always used negatively but is usually for someone who’s a little strange.

Sibel is always talking about how great she is. In public. Usually so everyone can hear.

She’ll also just talk openly about private stuff that you’d rather she didn’t tell anyone.

So definitely don’t trust her with your secrets.

A slim customer / A slippery customer

Sibel is also unreliable and untrustworthy.

Somehow, when she’s done something wrong, she’ll always manage to avoid getting in trouble for it. Just avoid her!

If a good egg is a generally good person, then a bad egg is … well … a bad person.

I don’t know why we think it’s a good idea to describe someone as an egg.

Have a screw loose

Yep — she’s definitely mad. Did you see how she started throwing eggs and shouting at her own house?

“Nutter” is a particularly British English word. We use it especially for those people behaving weirdly in public. You see them get on the bus, and you seriously consider just getting off at the next stop.

Seriously, living in the UK can be a game of “avoid the nutter” sometimes. We’ve got a lot of them.

Have a short fuse

She gets angry really easily.

“She’s fine as longs as you don’t annoy her — she’s got a really short fuse.”

Wow. Sibel really is not a nice person.

But the worst thing about her is that you just can’t get rid of her.

She’ll just follow you everywhere and won’t listen when you tell her you’d rather be alone or that she isn’t invited to where you’re going — wherever it is.

But at least you’ll always know where he is.

Sitting on the couch doing nothing.

Thick as a plank

He might think he’s a smart guy, but he’s actually completely stupid.

This is a more polite way of saying that he’s stupid.

I mean, he really is stupid.

He thinks the Matrix is a kind of cheese.

Head in the clouds

Andy also spends a lot of his time daydreaming. 90% of the time he’s not in the real world at all — just imagining what he’s going to do with the millions of euros he’s never actually going to make because he doesn’t do anything.

He’s unrealistic and just dreaming all the time.

“Don’t bother asking him — he’s got his head in the clouds.”

If you ask Andy where he put his phone, he won’t remember.

If you ask Andy to get some lemons, tahini, chickpeas and garlic from the shop (yep — you’re making hummus again), he’ll probably come back with an orange and an onion.

He can’t remember things well, and he has a very, very short concentration span.

What were we talking about?

All over the place

This is basically the same as “scatterbrained” but even a little stronger.

This is when you might want to use the phrase “pull yourself together.”

“Come on Andy! Pull yourself together! Where did you put the keys? I want to get back inside.”

A pain in the neck

Although Andy’s pretty annoying, we can probably call Sibel and Tony a pain in the neck, too.

It just means an annoying person — someone you’d prefer not to be around.

I love hearing your answers, so let me know in the comments.