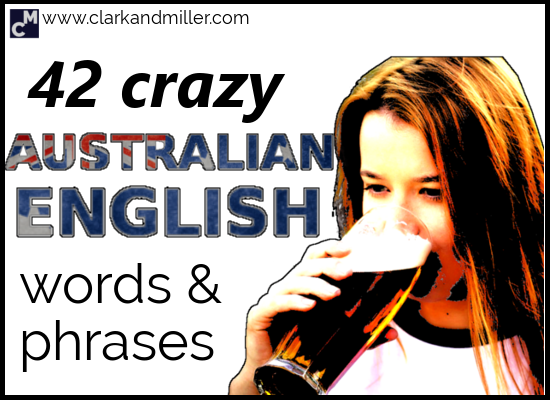 You’re about to learn 42 Australian English words and phrases to make you sound like a real Aussie.

As you may have noticed from last week’s post about Australian signs, I’m in Oz this month!

“What’s the most interesting thing about Australia?” I’m sure you’re asking.

Well, if you know me, you won’t be surprised to hear that I’ve really noticed how people speak differently here.

So I did some research and found that there are hundreds and hundreds of Australian English words and phrases, and a lot of them are used every day. So you’ll need to know them to survive here!

I found that there are 6 categories with lots of unique Australian words and phrases: 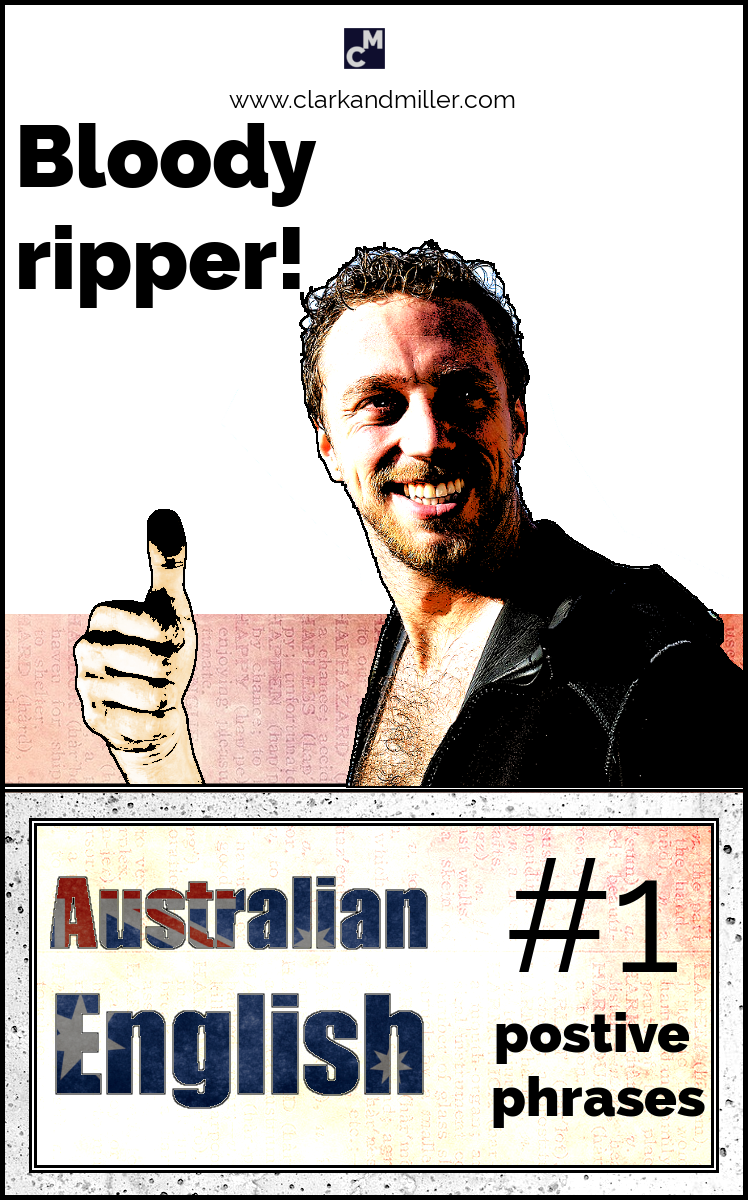 Click to hear the phrases spoken by a real Australian.
Bloody ripper — This just means “Awesome!” or “Cool!”.
Too easy! — When I heard this for the first time, I was buying a bottle of wine, and the sales guy said it as he was handing me my change. I thought it was a complaint. “Maybe I should’ve made it more challenging for him,” I thought. “I should’ve paid in five-cent coins or something.” Actually, this one just means “Sure! No problem!”.
No worries! — This one means the same as “too easy.” This is a classic Australian expression, and you’ll hear it a lot in Oz.
Beaut / beauty — “Amazing!” “Awesome!” “Excellent!” — that sort of thing.
Ridgy-didge — This means “real,” “genuine” or “not fake.”
Fair dinkum — Same as “ridgy-didge.”
Dinky-di — Same as “ridgy-didge,” but you can also use it to mean “really!” as in “No — dinky-di — I DID see a tiny, pink turtle in my soup. He just got bored and flew away.”
To give someone a fair go — To give someone a chance or to treat someone fairly.
G’day! — Another classic Australian phrase. This is what people often say instead of “hello.” I think you can figure out that it’s short for “good day.”
She’ll be right — “Everything’s gonna be just fine. Don’t worry!”

Click to hear the phrases spoken by a real Australian.
A few stubbies short of a six-pack — Have you ever met anyone that’s just a bit stupid? Not 100% on the same planet? This one’s for him or her. (By the way, a “stubby” is a small bottle of beer, and a “six-pack” is six of them. You’ll see later.)
A few sandwiches short of a picnic — This is the same as “a few stubbies short of a six pack.”
Suss — This one is used to describe someone you don’t really trust very much. It’s a short version of “suspicious.” You can also use it for other things you might be suspicious about, like an offer that’s too good to be true or that website that asks for your bank details before it lets you see that adorable picture of the fluffy kitten.
To spit the dummy — You know when kids don’t get what they want? What do they do? They start screaming and running around like mental robots. We often call this “to have a hissy fit” in Britain. In Australia, they say “to spit the dummy.” Why? Because Australians are obviously creative! It’s not just for kids; adults can spit the dummy, too.
Drongo — This is actually a type of bird, but Australians use it for someone when they do something stupid, like “Why did you put your laptop on the barbecue, Wayne? You’re such a drongo!” or “You’ve got your right shoe on your left foot and your left one on your right, you drongo!” This is actually quite a friendly phrase.
Bludger — Remember Andy? A completely lazy, good-for-nothing couch potato who just expects the world to give him what he needs without him doing anything. That’s a bludger. Andy is such a bludger. 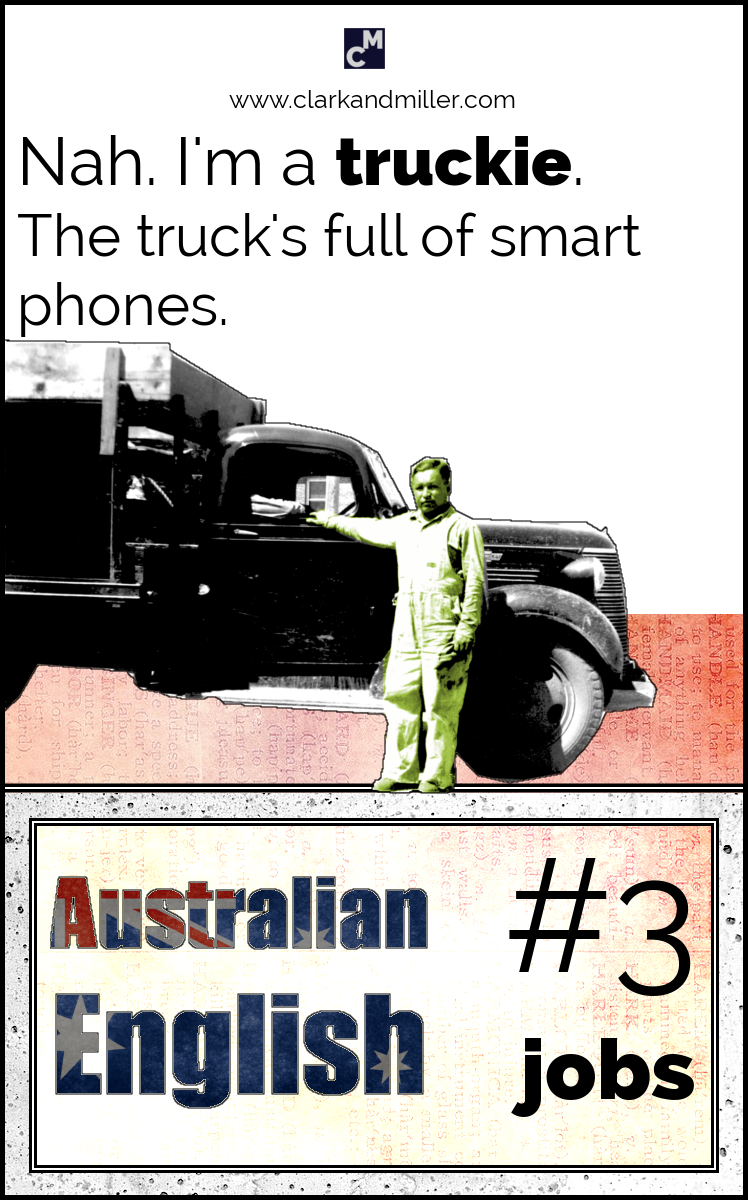 There’s something in language called a “diminutive.” If you’ve got kids, you probably use diminutives every day.

What is a diminutive? Well, it’s when you’ve decided that a word just isn’t cute enough — so you make it cuter. It can also show the “smallness” of something.

For example (and I can’t believe I’m sharing this information with you), my mother used to call me Gaby (pronounced “gay-bee”) instead of Gabriel.

Well, Australians LOVE diminutives, and when it comes to jobs, they use them all the time!

Click to hear the phrases spoken by a real Australian.
Truckie — Someone who drives a truck —  a truck driver, if you like.
Tradie — Short for “tradesman” —  a skilled worker. It could be an electrician, a plumber, a carpenter, etc.
Garbo — Someone who takes out your rubbish. Or trash. Or garbage. Garbage … garbo? See how this is working?
Chippy — This one confused me. That’s because in Britain, a “chippy” is where you go to get your fish and chips, which British people eat every day (not really). But in Australia, a “chippy” is a carpenter — someone who builds things out of wood. This one’s quite creative and probably comes from “wood chips,” which are the small bits of wood on the floor when a carpenter has just made something.
Brickie — A builder. But not just any builder. The guy who lays the bricks — or the bricklayer.
Sparky — I like this one. It means “electrician.” 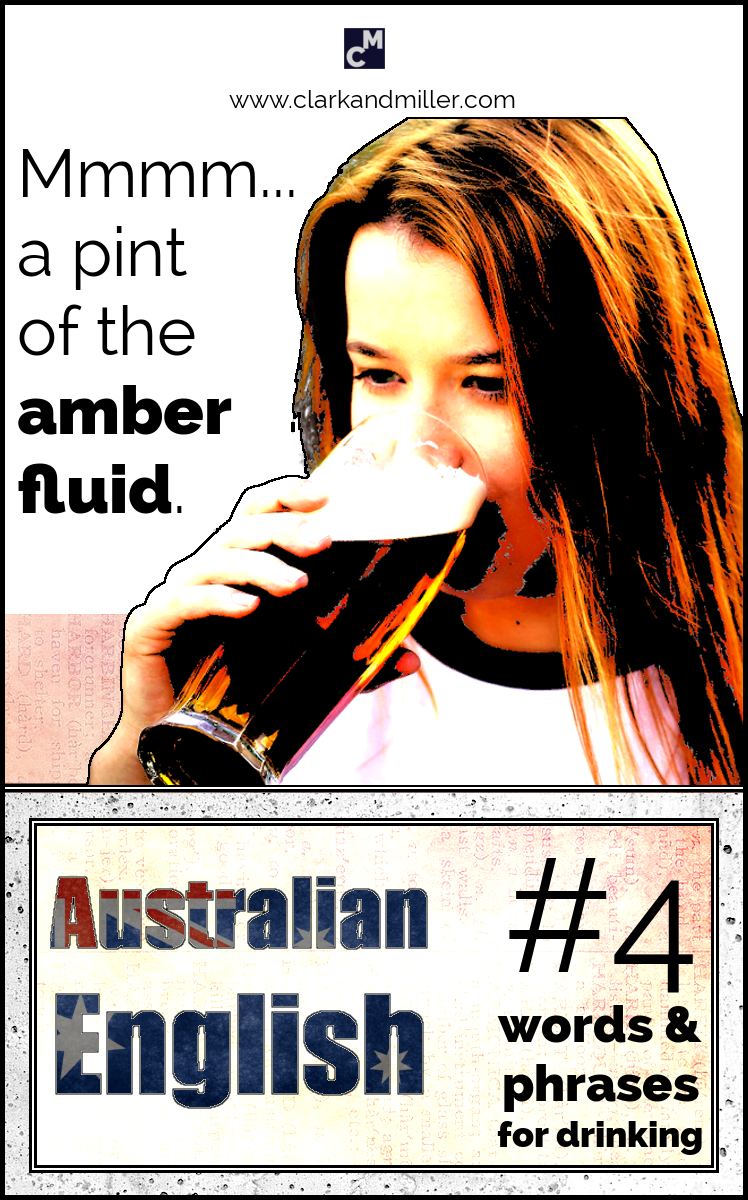 They make excellent wine, and beer is very popular.

Unsurprisingly, there’s a large number of phrases related to drinking.

Click to hear the phrases spoken by a real Australian.
Amber fluid — Beer! Sounds nice, doesn’t it?
Tinnie — A can (or a tin) of beer.
Stubby — A small glass bottle of beer.
12-pack (or a 6-pack or a 4-pack) — NOT related to the gym and men’s stomachs. It just means a pack of 12 beers.
Esky — A box you can put your beer (or food) in to keep it cool. Otherwise known as a cooler.

#5 Australian Words for Places and Things

As I said before, Aussies love to use diminutives for jobs.

They love using them for places, too.

Click to hear the phrases spoken by a real Australian.
Servo — A service station. You know, one of those places you get petrol, a coffee or overpriced biscuits.
Bottle-o — This is a diminutive for “bottle shop,” which is the place you can buy alcohol. Interestingly, alcohol is quite restricted in Oz — you can’t buy it at the supermarket, and, in some states, bottle shops have strict opening times. Want a can of beer after 5 pm on a Sunday? Too late!
Dunny — Toilet! No, I can’t see the connection, either. I’ve just learned to accept it. A dunny is a toilet. Fine. Next, please!
Op shop — A charity shop. These are places that sell second-hand stuff that people have donated. The money they make goes to a charity. A lot of countries don’t have op shops, and I think more countries should open some. Everyone wins!
Verge / nature strip — This one differs depending on which part of Australia you’re in. You know that little patch of grass between your house and the road? That’s the verge! For some reason, the verge is a big deal in Oz. They have “verge clearance” days, when you can put stuff you don’t want on your verge, and the local council will take it for you. You also have to look after your verge. By law! And don’t ever think about parking on, or even in front of, your neighbour’s verge. They will kill you. Or at least tell you to move.
Bubbler (only used in some parts of Australia) — A drinking fountain. You know, those places in town where you can get some drinking water. Australia’s very hot, remember? So these are kind of important, but ugly, things.

Click to hear the phrases spoken by a real Australian.
Trackie dacks — Tracksuit bottoms — the sports trousers you wear at the gym or sometimes at home to be more comfortable. Or what you wear if you’re British and into electronic music. Imagine sports trousers with the 3 lines down the side. That’s trackie dacks.
Runners — Sports shoes! “Trainers” in British English and “sneakers” in American English. Those shoes that you run in. It makes sense, right?
Thongs — This one can be confusing for non-Australians, as a “thong” in most Englishes is a “g-string.” You know, one of these things:

But in Oz, they’re flip-flops. You know, these things: 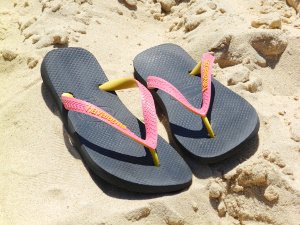 Swimming is obviously a big deal in Oz. How do I know that? Because they have a million words (well, at least 6) for swimwear.

Sorry — you can’t unsee that now.

OK. So you’ve seen lots of Australian English words and phrases today, and hopefully you’ve got a feel for how they work.

So now I want you to test your understanding. Can you survive in Australia?

Here are some sentences you might hear in Oz. What do the words in bold mean?

Did you find this useful? Do you know any people (or kangaroos) that might also benefit from this? Then BE AWESOME AND SHARE! Spread the knowledge!