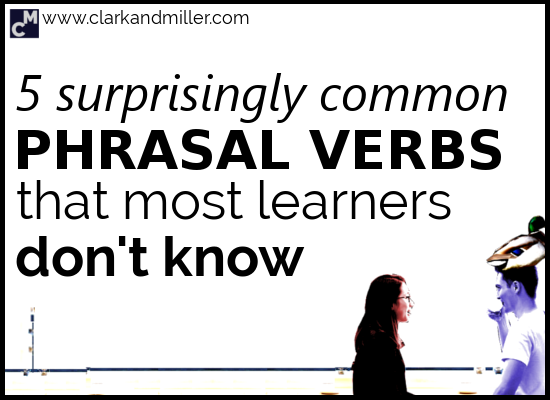 Here’s a question for you:

What’s the most difficult thing about learning English?

When I ask this question to English learners, the most common answer is:

“Phrasal verbs! Why do they exist? Why do you have to make English so complicated with these stupid things!”

And it’s a fair point — phrasal verbs are unnecessarily complicated.

But let’s not make life difficult.

You don’t need to learn long lists of phrasal verbs.

It’s more efficient to focus on the phrasal verbs that are used the most in English.

That’s where I can help!

I researched the 50 most common phrasal verbs in British English.1, 2

There were a lot of phrasal verbs that you probably already know (like “give up” and “go on”), but some of the most common phrasal verbs surprised me — because English learners typically don’t know or use them.

So here they are! Thank me later — with chocolate coins!

This means “implement” or “execute,” which basically means “do” — in a way.

We only use this in quite serious, getting-things-done kinds of situations.

This one means “bring something to someone’s attention.”

You’ve basically finished it, but is it ready to publish?

Before you publish it, you need someone to have a look at it and find the mistakes you’ve made (the ones that you haven’t noticed yet), right?

Once they point out the mistakes, you’ll be able to correct them.

And then your book will truly be awesome.

Finally, it’s also really common to use this structure:

So I might want to point out that we just don’t have enough time to sit around eating doughnuts.

Or point out that everyone went home ages ago, so there’s no need to keep singing.

Or that you have a duck on your head.

According to my research, this is the 11th most common phrasal verb.

That’s probably because it actually has a few different meanings:

It means “invent” or “create.”

We usually use this for stories. Think of a dad sitting down with his kid at bedtime, and the kid wants a story. Because kids always want stories, for some reason. They like stories.

Now, either the dad can find a book and just read a story from the book.

Or he can make one up!

It means “to compensate for something.”

OK. When was the last time you forgot someone’s birthday? Or didn’t meet up with them when you said you would? Or had to cancel plans with them? Or accidentally dropped their new phone in the river?

Buy them cake, of course! (Or maybe something else.)

There are a couple of ways we can form a sentence with this phrasal verb:

Like, “Can you do my shift on Friday? I’ll make it up to you by doing yours on Saturday.”

Like, “Yeah, I’m taking him to Euro Disney. I’m making up for telling him that Father Christmas doesn’t exist.”

This basically means “to make friends again” — after a fight, an argument or a disagreement. Or after you’ve looked at someone the wrong way, and then they look at you the wrong way, and suddenly you hate each other for no good reason.

This one’s similar to the last use. The main difference is that instead of one person doing something wrong to someone, you’ve both had some sort of argument or disagreement.

Maybe you’ve stopped talking to each other for a while.

Maybe you’ve been giving each other evil looks for ages, too.

But after a while, it’s time to make up. Forget the argument — forget the fight!

Shake hands and give each other a hug. And everything’s well again!

This one also has a few meanings:

It means, “I think you’re being unreasonable, and now I’m strongly saying that you should change your mind.”

It’s about Freddie Mercury, and how he escapes a burning airport and saves the British Queen’s favourite corgi. (Corgis are those annoying dogs that the Queen appears to like for some weird reason.)

Anyway – your story’s great, and naturally, you want to show it to someone.

You ask your best friend, but she’s just being difficult. She’s just refusing to read it. She has no time. She doesn’t like Freddie Mercury. Or corgis.

You try to convince her. She’s being unreasonable, of course. (Who doesn’t like Freddie Mercury? I mean — look at him!)

So you want to say something to both convince her that she’s being unreasonable and to help persuade her to read it.

It’s a bit like “please,” but don’t use it in a sentence; it’s used by itself. Also, it’s not as polite.

Be a little careful with this.

I said this is like “let’s go!” but it’s not exactly the same.

Don’t use it with someone you’re unfamiliar with – and please don’t use this with your boss. Unless you’re really friendly with your boss (or you like getting fired).

We can use this one with friends. Especially if we want to hurry them up.

I also find myself saying this to an invisible bus while I’m waiting for it in the rain.

OK. This one usually happens when person A comes on to person B.

Person A is usually a guy and person B is usually a lady (though I have seen some rather interesting situations with the roles reversed).

To put this bluntly (directly), this is when person A tries to “make the first move” with person B, hoping that it’ll lead to sex.

Most of the time, person B isn’t interested in having sex. At least not with person A, who smells and still lives with his mother. In a car.

Do you remember Tony from my negative personality adjectives lesson?

Tony has a lot of negative characteristics.

He loves himself, he can be rude, and he’s also very arrogant.

And when he sees something he wants (or someone he wants), he just tries to take it.

So imagine you’re at a cafe or in a bar. Tony just casually walks up to you.

He talks to you for a while, mostly about himself, of course. Then he asks you to come back to his place for a little “you-know-what.”

Well – he just came on to you!

Unsurprisingly, this one has a few meanings, too.

Let’s look at them. Then coffee?

This means “to happen.”

I’m glad you asked that question.

There are only a few ways you can use this phrasal verb to mean “happen.”

It can be a question:

Or it can be used in this phrase:

But it’s a bit weird saying something like, “A major earthquake has just in Eastern Turkey. Our reporter, Dan Strange, is here with more details.”

That’s because “go down” in this sense is VERY informal — and quite American.

This one basically means “how people reacted to something.”

In other words, it could mean “be received.” (We can talk about how someone “receives” news, information, a performance or something they can react to.)

We almost always use this one to talk about how well or how badly something was received.

So it’s common to hear it as a question with “how”:

“How did your cat juggling performance go down?”

“How did it go down? It went down terribly! Nobody understood it.”

This is going to sound a bit strange, but this just means “go.”

We add “down” for almost no reason.

It just sounds more friendly and can sound quite relaxed and natural.

OK. So this has the same meaning as “go,” but you can’t use it in any situation.

We can use it when we’re talking about going to a particular physical place.

“I’m just going down to the shops. Do you want anything?”

You would probably only use it for relatively short distances, too.

“I went down to your house the other day. But you weren’t there. Were you cat juggling in town again?”

But it’s probably a bit weird to say:

OK. So there we are – 5 of the most common phrasal verbs!

How many of the phrasal verbs from today can you remember?

Answer in the comments and let’s share our experiences and knowledge, and get some excellent practice going!

Did you find this useful? Do you know any people (or ducks) that might also benefit from this? Then BE AWESOME AND SHARE! Spread the knowledge!