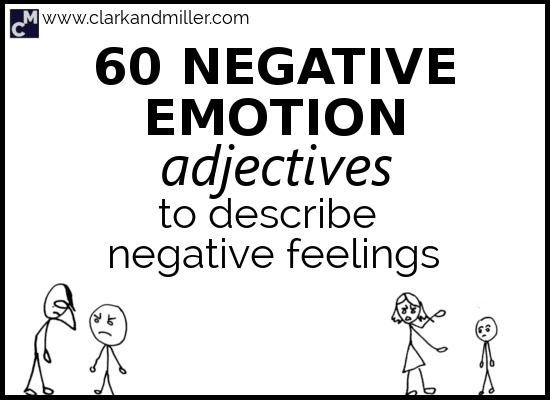 Talking about our feelings, especially negative feelings, isn’t easy — even in our first language.

So today I’m going to show you different words to describe negative emotions in English. 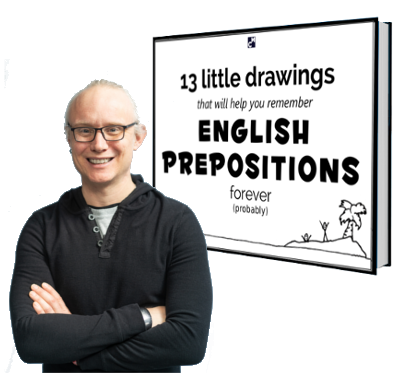 Other Words for “Anxious” 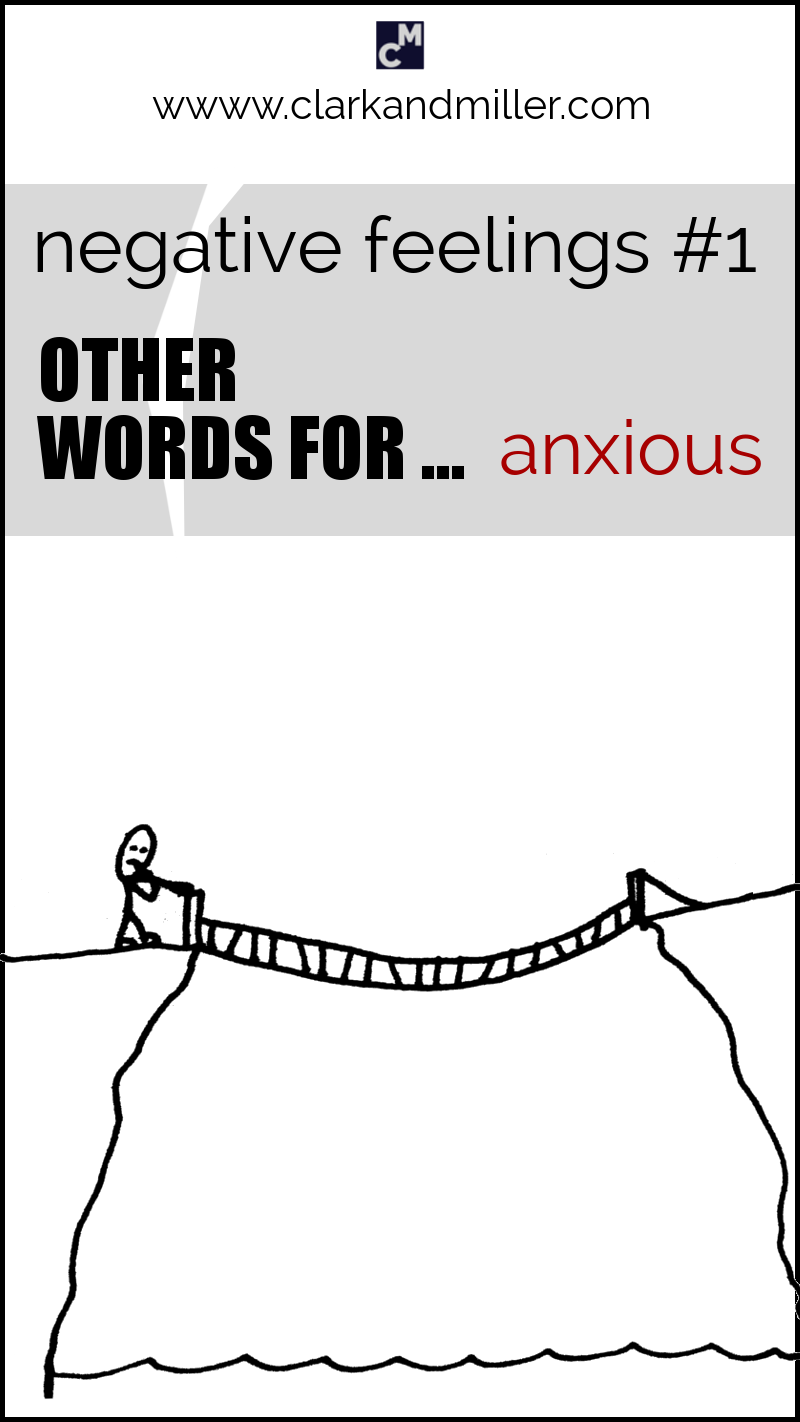 In many languages, “nervous” and “excited” have the same meaning.

So sometimes I hear, “I have to go to see the doctor today. I’m excited.”

Which isn’t the feeling I usually get when I have to go and see the doctor. Unless it’s THE doctor:

So “nervous” is basically the negative of “excited.” That feeling before an exam, seeing the doctor or when you’re about to cross a massive rope bridge.

OK. We all know what this means, right?

Just remember that “stressed” is how you feel — not “stressful.”

Use “stressed” for the situation:

“I’m stressed. This Christmas shopping is really stressful. Perhaps I should become a pagan or something.”

OK. As you’re about to see, we have three words for “afraid” and at least two for “very afraid.”

Blog lists sometimes aren’t as simple as they seem to be.

“It’s only a quick checkup — nothing to be scared of.”

And again — it means “afraid.”

Why do we have so many words for “afraid”?

Why is Samuel L. Jackson in every film ever made?

The answer to both those questions is … “I don’t know.”

This one means “very afraid.”

“Scared of spiders? He’s absolutely terrified of them.”

This one also means “very afraid,” so it’s like “terrified,” but there’s a little extra meaning in there.

So it’s like you’re so frightened that you can’t move.

This is a mix of “worried” and “anxious.”

When you just can’t relax.

Think about how a mother might feel when her teenage kid is out with his friends.

Or when you’re waiting for your latest exam result.

This is pretty much the same as “unsettled.”

Sometimes we use it to describe a personal characteristic.

We’ve all met that guy, right? The one who just can’t relax. Always worried about something.

“Every time the president says something it puts me on edge.”

Have butterflies in your stomach

Then you’ve got butterflies in your stomach.

Nice phrase, yeah? I mean, it really feels like that sometimes, right?

You know that feeling?

Something bad’s going to happen. But you don’t know what.

And you don’t know why.

It’s basically about feeling worried about the future, even though there may not be any reason to.

You might have noticed the word “stressed” in “distressed.”

Well, it’s similar but not quite the same.

This is also a bit like “on edge” or “unsettled.”

And this time, we can really see it.

He just won’t sit down! Or stop walking up and down the room.

Think about someone who’s had too much coffee.

This one means you’re so nervous that you can’t stop moving parts of your body.

Maybe you’re kicking your leg against the chair or maybe just moving your hands around.

A lot of these adjectives describe someone moving around because they’re too nervous.

And this is another one of those.

When you’re restless, you can’t relax because you’re too worried.

This one is quite general.

Use it to describe a general feeling of anxiety or discomfort.

Other Words for “Angry” 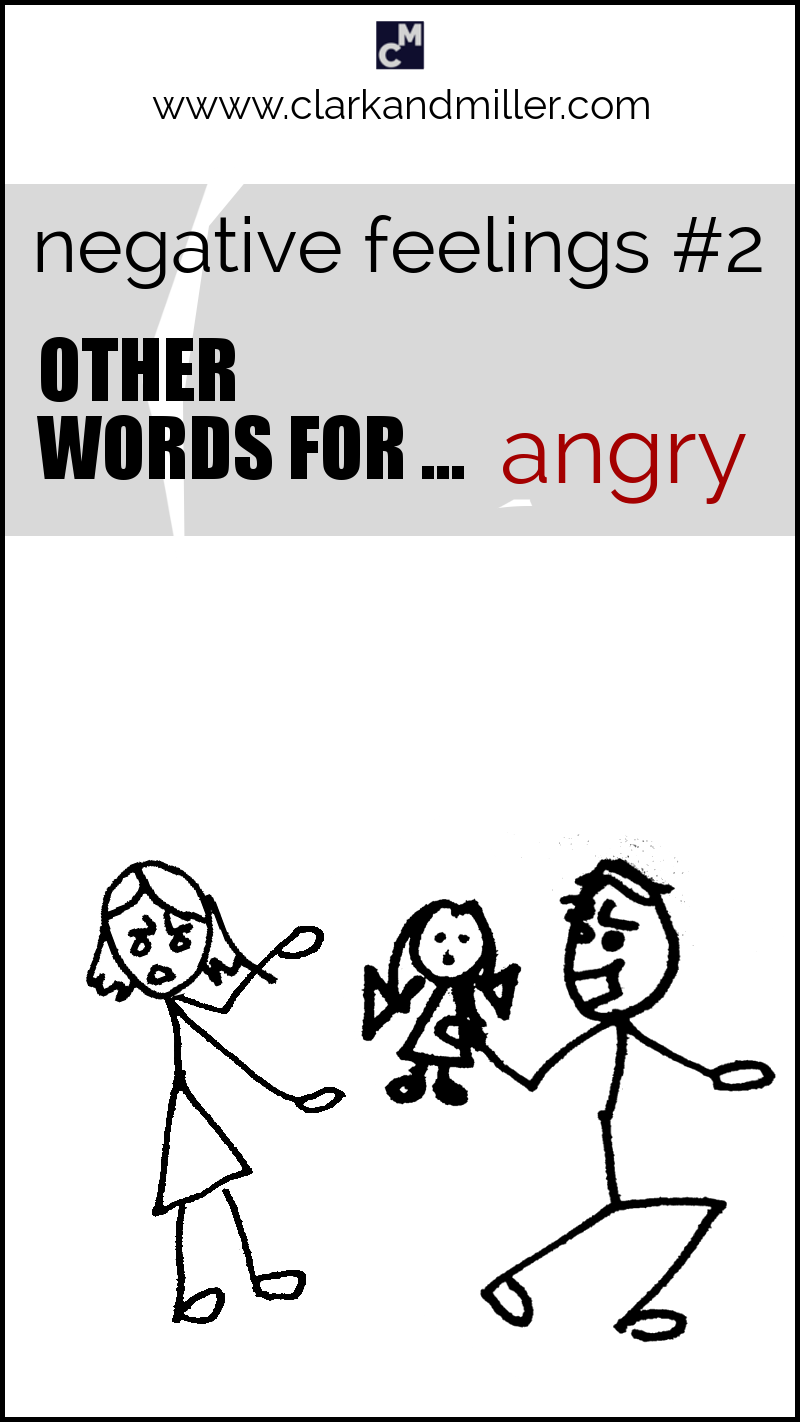 But I would be too. I’m always angry when someone steals my dolls.

“How did he react to the news?”
“He was absolutely livid!”

Very angry. But be careful with this one — it’s pretty rude. Friends only!

It’s quite a low-level anger. Like when the builders next door are making loads of noise. Or that bee won’t leave you alone.

This is basically the same as “annoyed.” It’s rather British, though.

“To be honest, I was a bit miffed when I found out they’d all gone to watch the new Star Wars film without me.”

The older I get, the more I make sure I don’t get bitter.

You can look at people younger than you and say, “Hey! That’s cool! Look at them! I was that young once, but now it’s over and everything’s fine.”

Or you could choose to be bitter about it — hating the young because you just don’t have that fresh-faced beauty and trust in the world anymore.

I usually go for the first option. It’s the better one, right?

It’s amazing how many words we have for “angry,” isn’t it?

Why do we have so many of these?

When you’ve run out of patience, and you’re ready to explode!

This is basically the same as “angry.”

But it’s a little weaker.

I usually think of a mother saying something like:

“If you push that dog one more time, I’m going to be very cross with you.”

Again — we have a lot of words for “very, very angry.”

Here’s another one. It means “very, very angry.”

The last one. Guess what it means? Yep! Furious! Enraged! Pissed off! Livid! Fuming!

Other Words for “Sad” 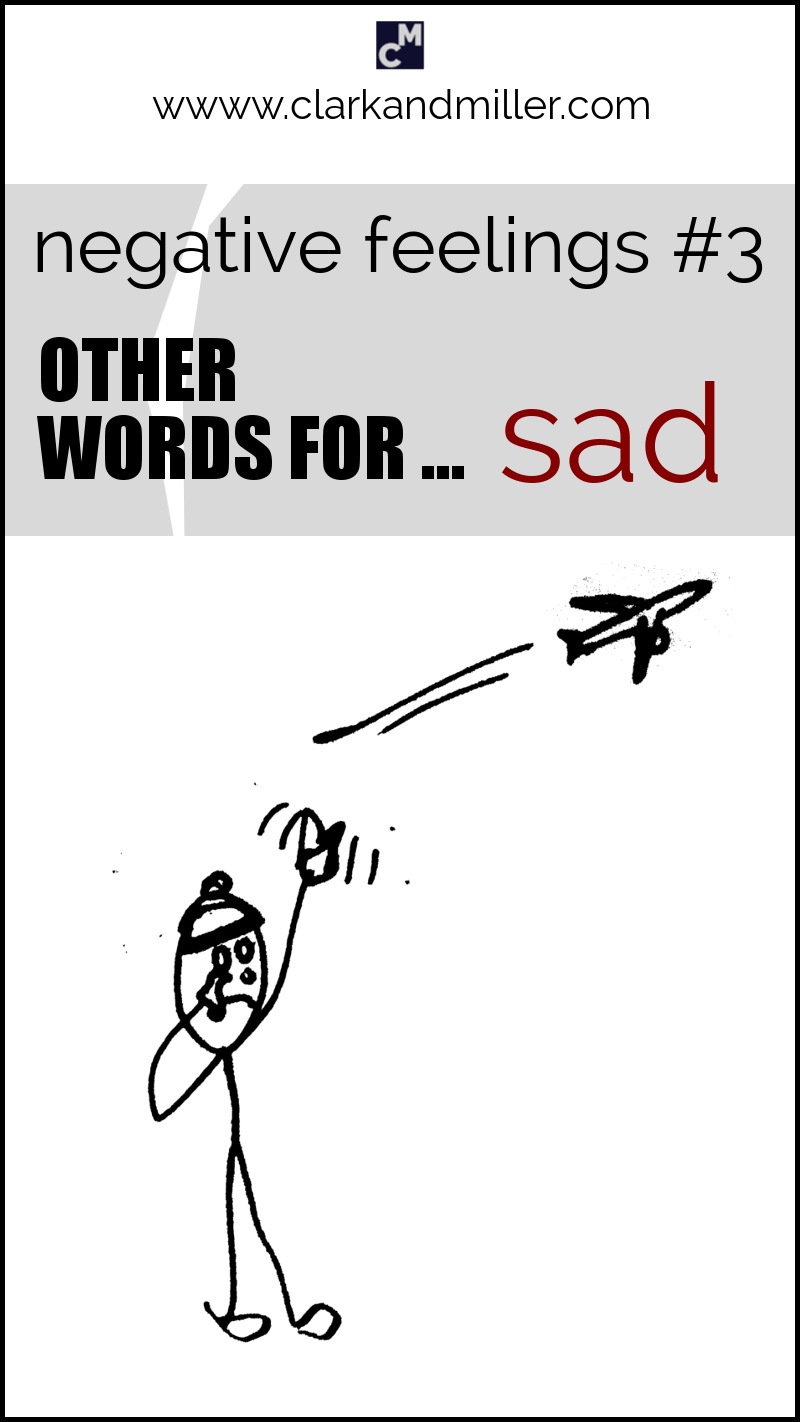 She’s gone! The love of his life!

And they only got nine days together.

Sometimes we just feel a bit sad. Maybe there’s a reason for it or maybe there isn’t.

Either way, we can say we’re feeling down.

Or if you’re bored of using “down,” use “low” instead. They have the same meaning.

Both “down” and “low” are idiomatic adjectives.

Down in the dumps

A dump is that place where all your rubbish goes after it gets collected.

Kind of a sad place, isn’t it?

This is actually a medical term and can be a serious psychological disorder.

But sometimes we also use it when someone’s kind of “long-term” unhappy.

Maybe they’ve just split up with someone.

Or maybe they’ve been reading the news too much.

“I think he’s depressed. He hasn’t left the house for weeks.”

This is an interesting one.

It’s a kind of sadness but has a daydreamlike quality to it.

A melancholic scene in a film would have a kind of dreamy sadness to it.

He’s in a bad mood, and he won’t really talk to anyone.

At best you’ll get a one-word answer from him.

This is similar to “sullen,” though a little more negative.

She hasn’t got what she wanted, and now she’s going to sulk.

She’s going to ignore you and not talk to you.

“Don’t be so sulky. There’ll be another ice cream van soon.”

Have you ever suffered from a broken heart?

Remember that feeling? That’s being heartbroken.

So you got the promotion! You’ve been made mega-super-boss-manager, and you’re going to be on that massive salary, working in New York, company car, Manhattan penthouse flat. Everything!

Then you find out that you got the wrong memo, and in fact, you’ve been fired.

Other Words for “Jealous” 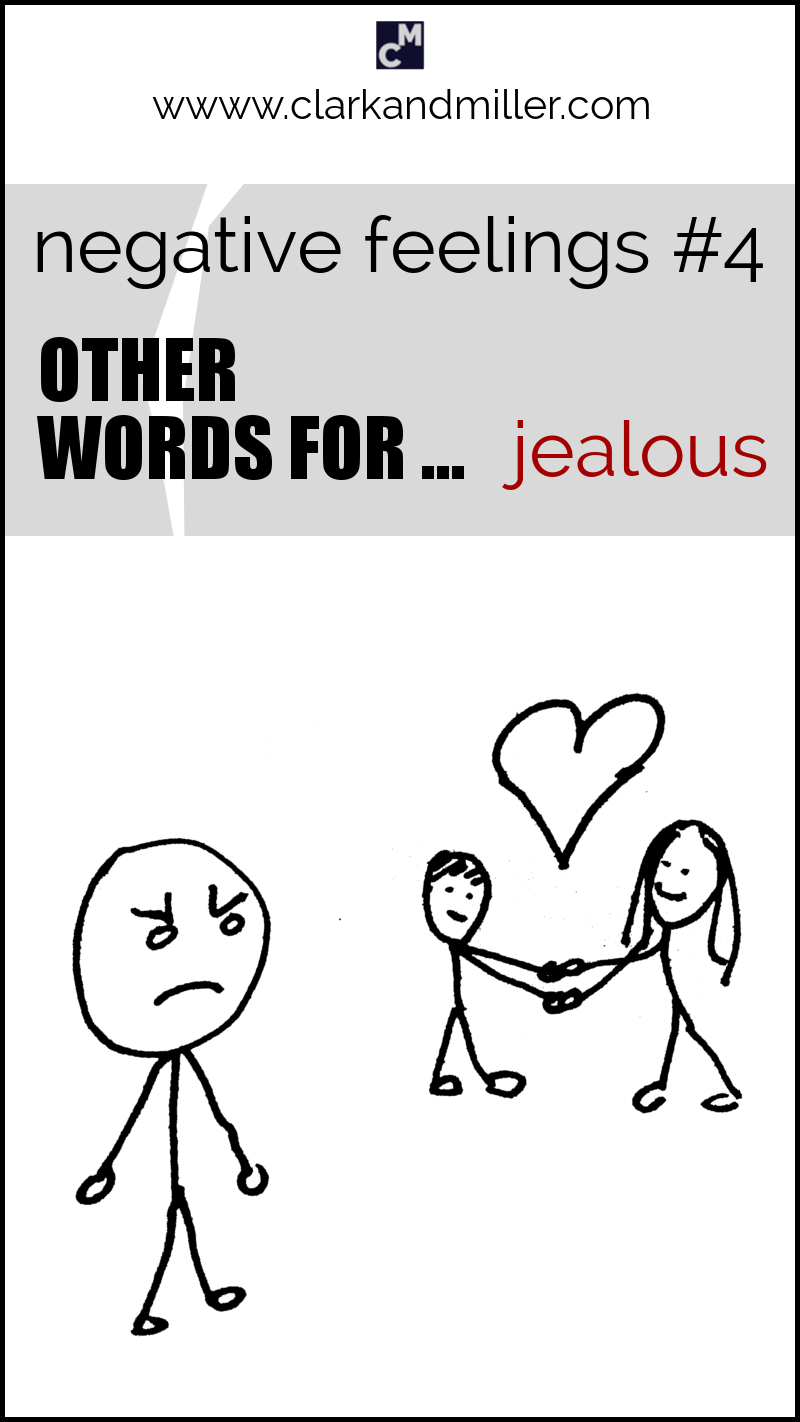 And that other guy just isn’t happy about that.

There’s a subtle difference between envy and jealousy.

Jealousy is about fear — fear of losing something (or usually someone) to another person.

Envy is just that feeling of “You have that. And I want it!”

Yep. Envy comes in a colour.

And that colour is green!

“Oh! You should’ve seen him! He was green with envy!”

This one comes from the Shakespeare play, Othello.

We use it to describe jealousy as a character.

“They were getting along just fine. Then the green-eyed monster reared its ugly head.”

Have you ever been treated unfairly?

Maybe the cops stopped you for no reason.

Or maybe the guy who buys cakes for the boss got the promotion, even though he can’t count past 199.

Then you probably felt resentful.

Other Words for “Regretful” 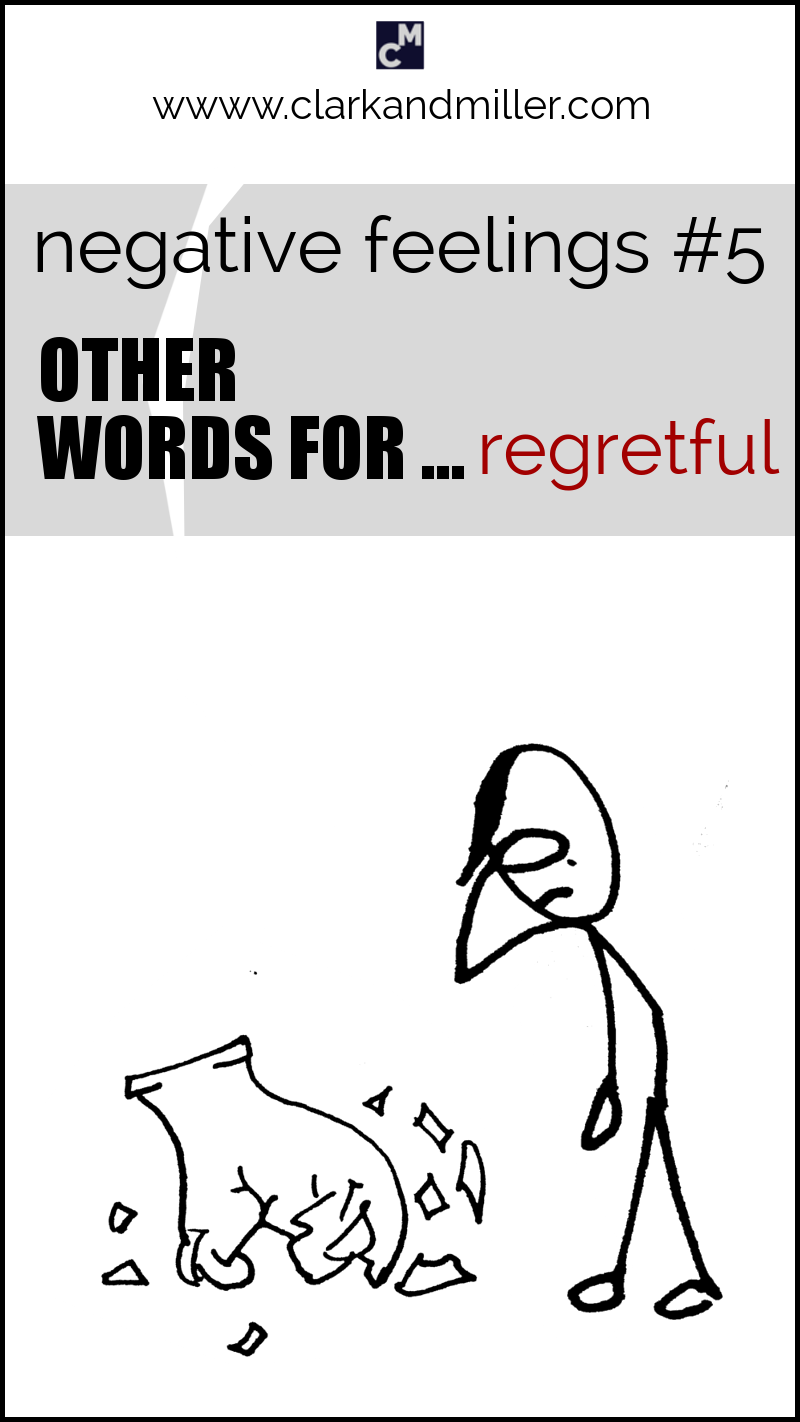 Back in December, we looked at the differences between “ashamed” and “embarrassed.”

To summarise, shame is a negative feeling you get as a result of something about YOU.

Perhaps it’s because of something you’ve done that didn’t meet your own personal standards.

If feeling ashamed is because of something you did that didn’t meet your own personal standards, feeling embarrassed is more about how other people look at you.

You feel bad because they might be laughing at you or judging you in some way.

“After what she did last week, she’s too embarrassed to show her face at work.”

Feeling guilty is related to feeling bad, but not for yourself (that’s “ashamed”) but for other people.

Let’s say you borrow a friend’s iPad, and you break it.

That feeling in your stomach that you get because your friend doesn’t have an iPad anymore? That’s guilt.

This word is quite strong and means “very, very regretful and guilty for something you’ve done.”

This feeling is usually a long-term one — the subconscious dealing with what you’ve done.

Other Words for “Bored” 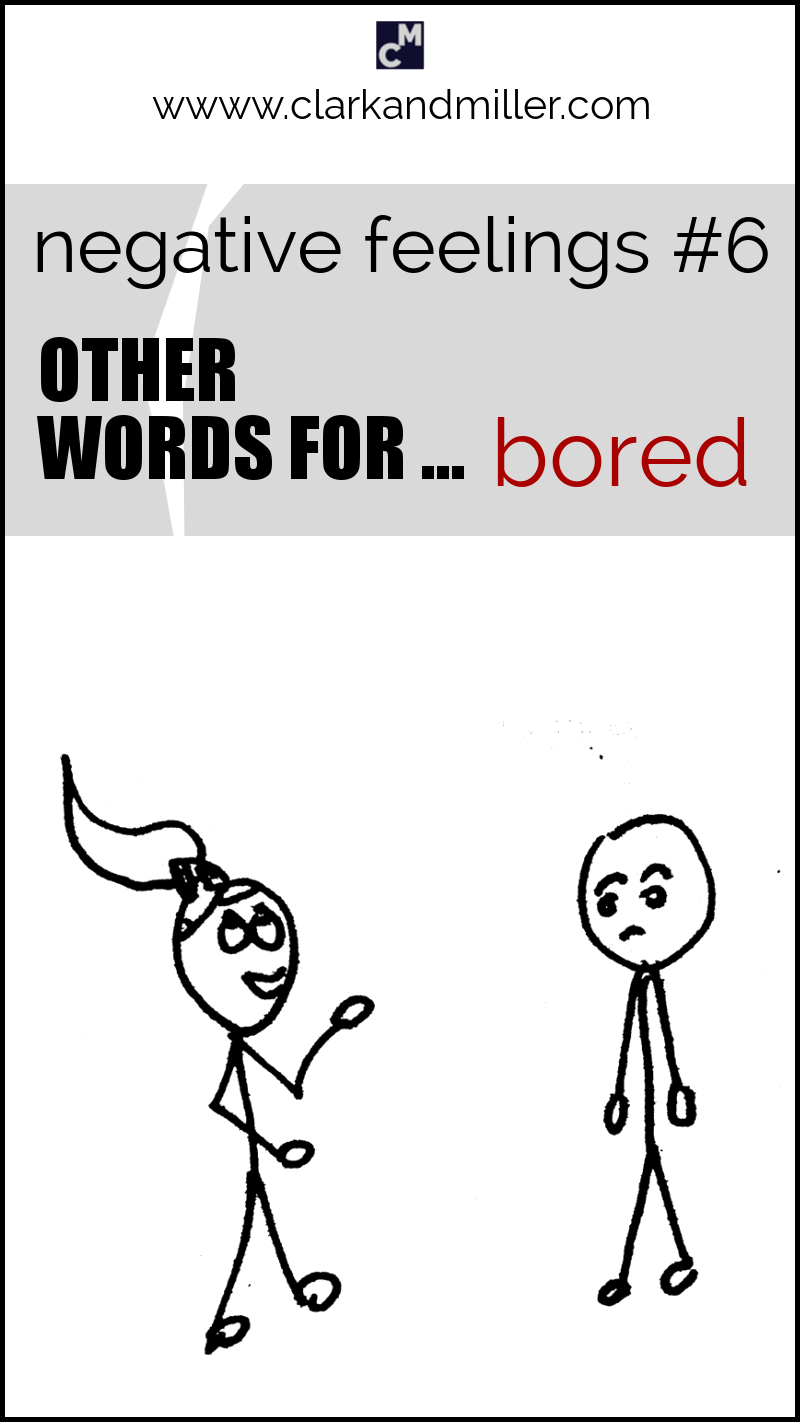 There he is — stuck in a conversation with Megan. Probably the most boring woman EVER!

Very bored — about one minute into a conversation with Megan.

Bored out of my mind

Very, very bored — about a minute and a half into a conversation with Megan.

This is a little different.

We use this when we talk about something we’re doing.

Other Words for “Tired” 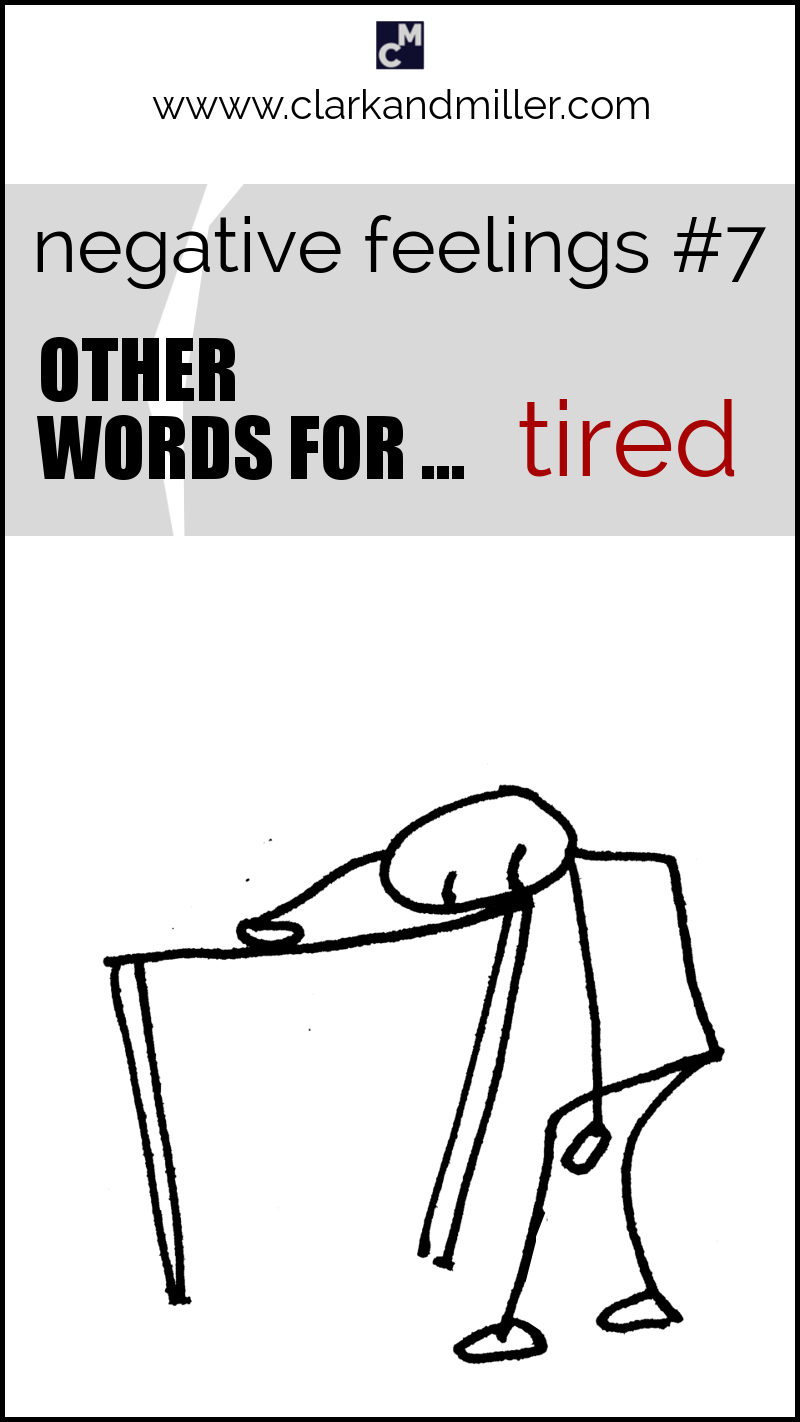 Interestingly, there are different ways of feeling tired.

I mean — are you tired because you haven’t slept?

Or have you just been running around too much?

Fatigue is that special kind of tiredness that happens after repeating something for a long time.

Maybe you’ve been cycling for eight hours, and you suddenly just need to stop.

Or maybe you’ve been working far too long without a holiday.

“Exhaust” means “to completely finish or run out of something.”

When you’re exhausted, you’ve completely run out of energy.

So say it to Americans and watch them get confused.

“I didn’t think I’d be so knackered after just one hour with those kids.”

This one’s more American than British.

But the British understand it because American stuff is EVERYWHERE! (I guess you noticed.)

This is similar to “exhausted.”

Very, very tired. Usually because you’ve been too active or stressed.

This is simply the state of wanting to sleep.

Your bed is calling you.

“What was in that drink? It’s made me so sleepy.”

Then you snap. You just can’t work any more.

This is the feeling of extreme fatigue as a result of being overworked in the long term.

This is similar to “sleepy.”

Your eyes are half closed.

You want to go to sleep.

It could be just because you need some sleep.

Or maybe you’ve had too much to drink.

Some medications also have a warning label:

“Warning: may cause drowsiness.”

It comes from the phrasal verb “to wear someone out.”

But you made it this far! Well done!

You now know 60 words to describe negative feelings and emotions.

As a reward, have some lovely carrot cake:

But let’s finish with a question or two (or four):

As soon as you reply, I’ll leave mine! 🙂