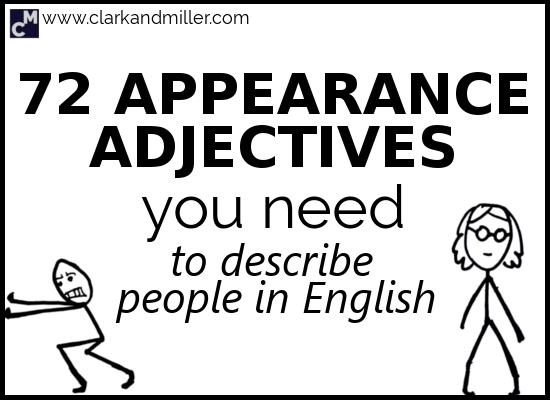 You’re about to learn 72 must-know appearance adjectives to describe how people look. For more adjectives, check out 59 Positive Personality Adjectives to Describe Your Favourite Friends.

My question is: Can you describe them?

I mean, really describe them, so that I could have a clear image in my head of what they look like — things like body shape, age, hair, etc.?

If you want to do it well, describing people’s appearance in English can be tricky and requires a lot of detail.

So today, let’s look at 72 adjectives to describe appearance in English.

By the way, we have a few words for body shape: “figure,” “physique” and “build” are the most common ones.

Other Words for “Fat” or “Large”

Overweight
This simply means “heavier than is healthy.”

Obese
It means very overweight. Sometimes it can be quite dangerous …

Stocky
Short with a wide body.

Paunchy
You know how some men gain weight?

They don’t just get fat everywhere — just the stomach.

Though we don’t usually say “He’s paunchy.” Go for “He has a paunch.”

Pot-bellied
The same as “paunchy.”

Big-boned
With a large body structure.

We also use this adjective as a euphemism (a way of saying something negative indirectly).

If you call someone big-boned, it’s usually just another way of saying that they’re fat.

Chubby
A little bit fat. Slightly overweight. But only a bit.

Think about cherubs. You know, these guys: 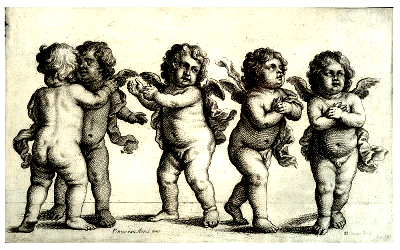 Plump
The same as “chubby.”

Podgy
Also the same as “chubby.”

Why do we have so many words for “chubby?” Maybe we just really like cherubs?

Let’s look at some more cherubs: 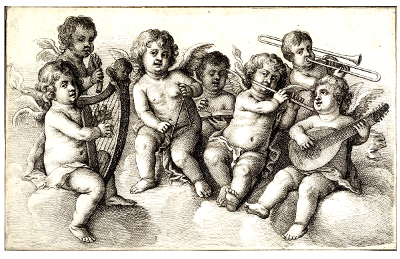 Curvy
This can be used in two ways.

Sometimes, it describes a woman with a thin waist and wide hips.

And sometimes, it’s used as a euphemism to mean “fat.”

Or better yet, just don’t mention it.

Flabby
We usually use this to describe a part of someone’s body, not the person as a whole.

So someone might have flabby arms or a flabby stomach.

It means they have a lot of loose fat (or skin) that kind of shakes and wobbles when they move around.

Other Words for “Thin” or “Small”

Slender
Thin, in a pretty or elegant kind of way.

Slim
A positive word for “thin.”

You can use this to compliment people:

“Hey, you’re looking slim these days. Have you been working out?”

Lanky
Tall and thin. But in an awkward kind of way. 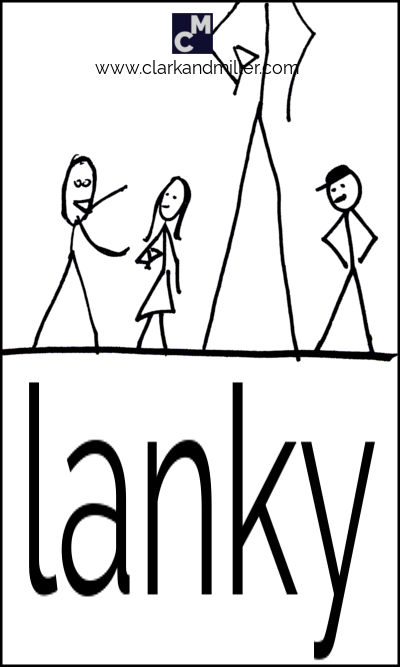 Slight
You know those people who are so thin that it looks like they might break into pieces if they fall down? That’s slight.

Petite
This is French for “small.”

In English it also means “small,” but we tend to use it to describe short women.

Other Words for “Muscular”

Beefy
Someone with a lot of muscles. This is informal and usually used for men.

Try to push him over. I bet you can’t. 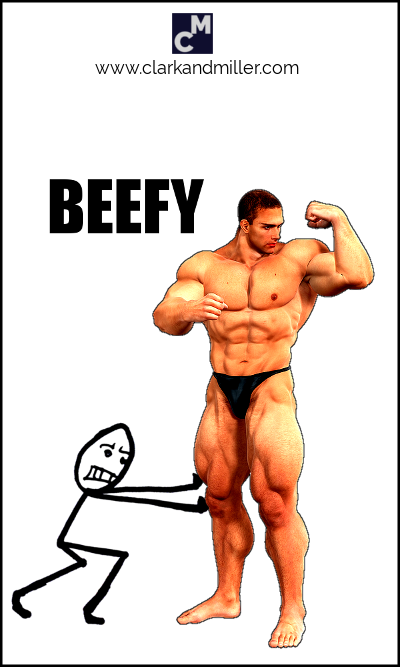 Imagine a wide person — one of those big guys or girls.

Ripped
What’s the big cliché of the gym?

It’s the 6-pack, right? You know, when your stomach looks like this: 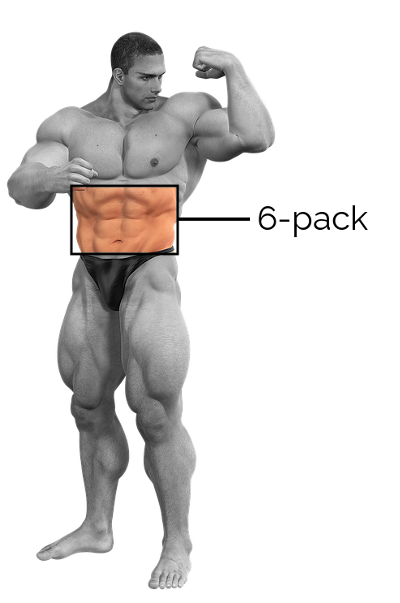 This is what I think of when I think of “ripped” — muscular and in good shape.

And happy to show it off, probably.

I think I would.

They move around looking uncomfortable.

When they sit down, they look uncomfortable and awkward.

Stooped
Someone who walks around as if they’re walking through a low doorway — but all the time.

The opposite of standing up straight.

Pigeon-toed
Standing with your feet facing each other, like this: 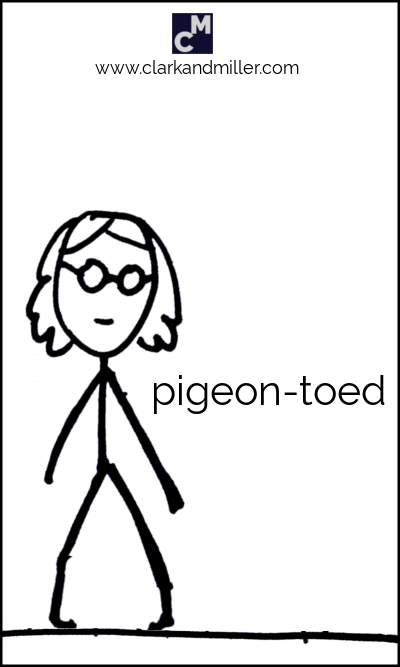 We have a lot of positive words for attractiveness. But look! Only three negative ones.

I think that says a lot of good things about humans.

Other Words for Beautiful

Attractive
Nice to look at.

You’d happily look at this person for hours if it wasn’t socially unacceptable.

Pretty
Not as strong as beautiful, but still positive. Usually used for women (and my cat).

Gorgeous
A more informal way of saying “beautiful” or “handsome.”

Cute
We actually often use this for things like kittens.

Kittens are weird — they make us change our voice and say stupid things like “You’re a kitty, aren’t you? What are you? You’re a kitty!”

That’s because kittens are cute.

But we can also use “cute” to mean attractive.

Hot
More or less the same as “sexy.”

Other Words for Ugly

Rough
This is actually quite rude, so be careful with this one.

But it’s there. And it’s used.

Plain
This is another euphemism.

We use it when we want to say that someone has nothing about them that’s attractive.

One of the things that really makes us look different from each other is that weird stuff that grows on the top of our heads: our hair!

I mean, really think about it. Isn’t it strange that we have it? 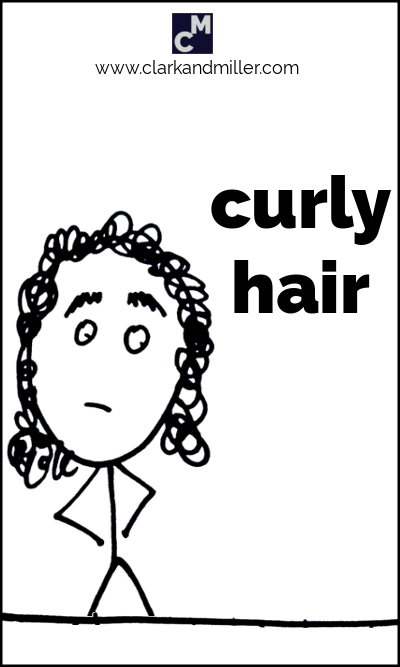 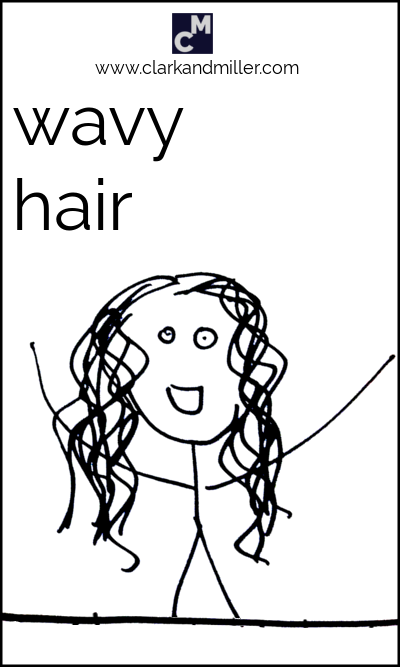 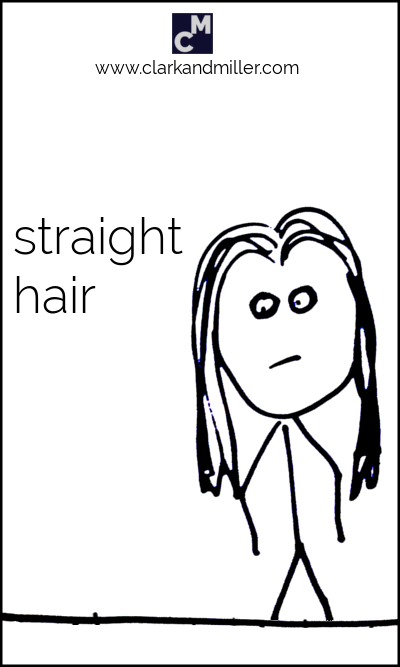 Remember — all of these are used to describe hair, not people.

Not “.” That just sounds very weird.

Bald
No hair at all.

Use this with the person as the subject:

So short that you almost look bald.

“He’s got closely-cropped hair. It doesn’t suit him at all.”

Shaved
No hair at all.

But this time by choice. Because you shaved it off.

“Since he joined the army, he’s had a shaved head.”

Balding
Not bald. But you will be soon!

Like with “bald,” the person is the subject here: “He’s balding.”

Shoulder-length
Hair down to your shoulders.

“When I was a kid, I had knee-length hair. I kept falling on it. Very annoying.”

Dreaded
In a lot of languages, the word for this is “rasta.” Think of Bob Marley.  Just so you know, it’s more common to use the noun:

Here’s a good dose of afro: 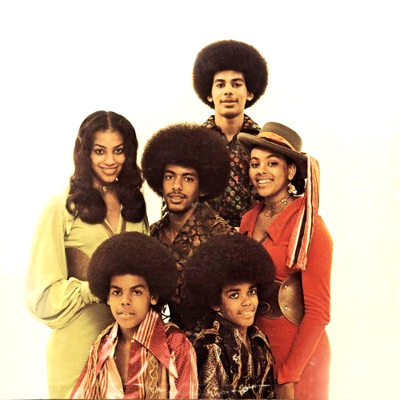 Gelled
When you add gel to your hair.

You know, that sticky stuff that you can use to style your hair.

Slicked-back
When you use gel or oil to comb your hair back.

Parted
When you’ve divided the hair into two parts. You can have a centre parting or a side parting (or “part” in U.S. English).

Spiky
When your hair is gelled up into spikes. Easy to draw. So I did: 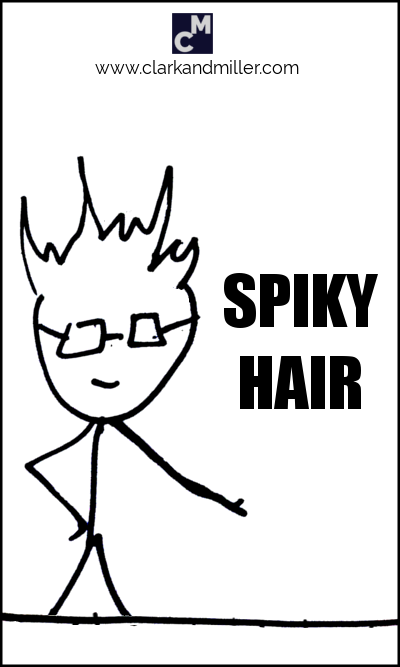 Well, no problem — go out, buy some dye and dye your hair.

Bleached
Or maybe you want something brighter?

This is when you use peroxide to lighten it.

Maybe you’ll end up looking like Courtney Love. Maybe not: 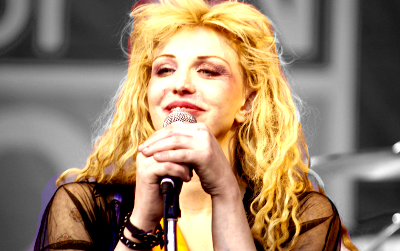 Highlighted
Perhaps you don’t want to bleach all of it?

Maybe you just want some of it bleached — in lines (or “streaks”).

Then get it highlighted.

Greying
We have to face the truth!

I’m happy with that.

But that bit in the middle? When it’s half grey, half not grey?

Ginger
“Ginger” is a way of describing people with naturally orange (“red”) hair.

But usually a euphemism for ginger.

Mousy brown
A sort of brown, but a sort of pale brown. Like this:

Greasy
You know when someone hasn’t washed their hair for a long time?

You run your fingers through it, and you need to wash your hands immediately.

We can’t deny it. We’re all getting older.

Thirtyish
About thirty. You can do the same with other ages: “sixtyish,” “sixteenish.” In fact, while we’re here, you can do this with times, too: “Let’s meet at Wimbledon at ten-ish.”

Young
You know this, right? But when do you stop being young? This is quite subjective I guess. My answer is NEVER!

Youngish
This is a great way to describe someone who’s sort of young, but maybe hitting middle age. Hard to tell. Youngish!

Middle-aged
It surprises me how different everyone’s answers are to this. Personally, I think it’s 40. From 40, you’re middle-aged. There you go — I’ve just decided for everyone.

Old
But when does middle age end and “old” begin? I don’t know. You’ll have to ask someone older than me.

Elderly
It’s not very polite to describe people as “old.” So we invented this nice, polite, respectful word.

In his early 40s
OK. This is a neat trick to describe people’s ages when you don’t know exactly how old they are. There’s a simple formula for this: 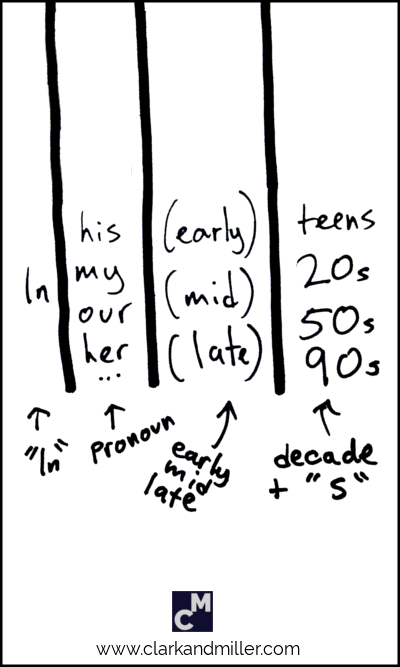 “You know that guy in the office in his early twenties? He just quit.”

“She’s pregnant? I thought she was in her fifties!”

There are a few adjectives to describe appearance that don’t really fit into any category, but I couldn’t just leave them out as they’re pretty useful.

Clean-shaven
Without a beard. But for a guy, not a woman.

Pierced
We usually use this word to describe someone who has a noticeably large number of piercings.

Tattooed
Someone with a lot of tattoos.

Hairy
Lots of hair! Everywhere! Even on the back and the back of the hands!

So let’s have fun with these.

Think about your best friend.

Done that? Good. Now tell me — what does (s)he look like?

Answers in the comments! Best description gets a free virtual cake.