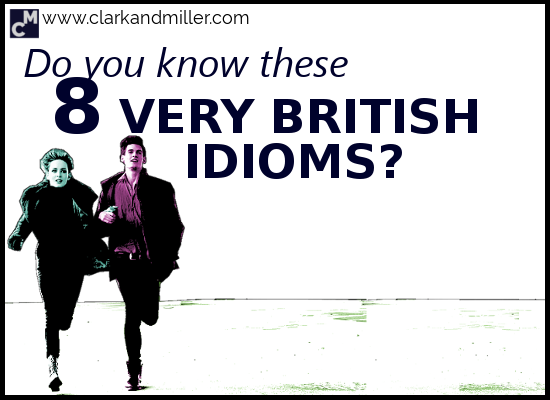 So you can express yourself beautifully in English (partly thanks to our big tenses review, right?!).

You know the tenses, your vocabulary is awesome, you know how to feel comfortable in different situations and you can describe the awesome and terrible people around you.

So you feel more comfortable and start joining in English conversations more.

Good for you! You rock!

Then someone throws an idiom at you, and you look like this:

Idioms are not only a wonderful way of expressing yourself like an expert English speaker, but they also give you a great insight into how the culture of the language works.

So today I want to introduce you 8 very British idioms.

For each idiom, you’re going to:

So let’s get started, shall we?

British Idiom #1: That’s not on 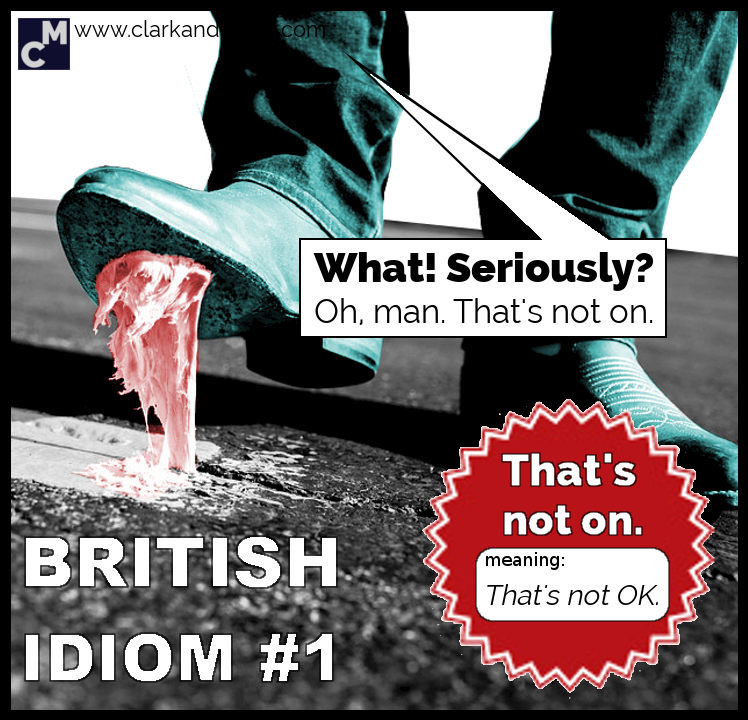 This is a modern version of an even more British-sounding idiom, “that’s not cricket.”

The formula here is pretty simple:

We usually use this phrase with “it” or “that.”

You can use it in any situation when you’re feeling (at least a bit) angry about something.

But be careful: If you’re angry with someone, don’t say this idiom to their face — it might seem aggressive.

Of course, if you really want to show your anger, then go ahead. But don’t blame me if they hit you, yeah?

British Idiom #2: Not my cup of tea 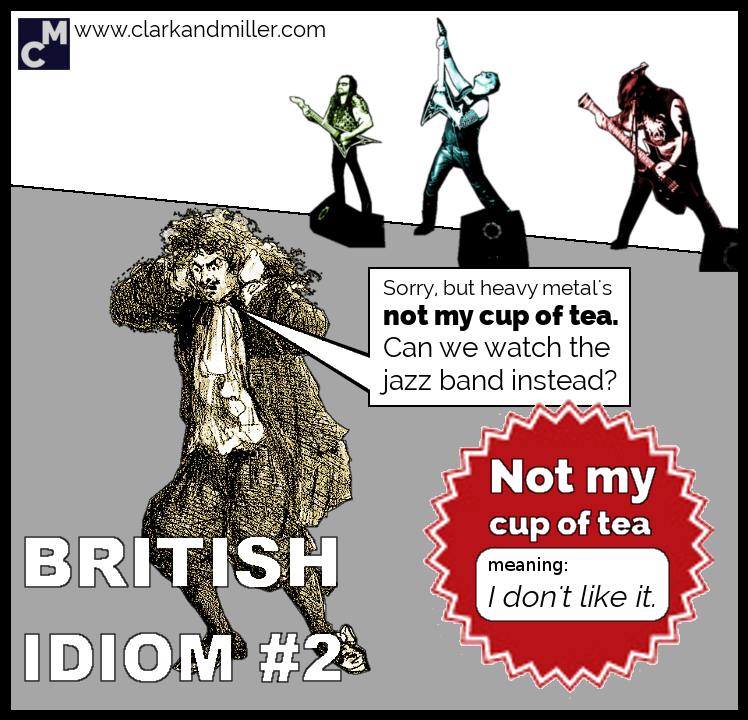 It’s something you don’t enjoy.

We can also say “it’s not my thing,” which is a bit more common these days.

In the 1800s, this idiom was commonly used in the positive, as in, “Oh, giraffe tennis? That’s just my cup of tea!”

But sometime in the 20th century, we started using it to describe things that we DON’T like.

You can use pronouns:

That’s not my cup of tea.

Or you can specify the subject:

Dolphin football’s not really my cup of tea.

Running 10 miles in the winter wearing just a baseball cap isn’t my cup of tea. I prefer giraffe tennis.

Good news. You can pretty much use this in any situation.

So you can use it with the Queen of England when you meet her. (We all meet her all the time, right?)

But you can also use it with your best friend’s strange cousin. Possibly after he’s invited you to some more giraffe tennis.

British Idiom #4: On the back foot 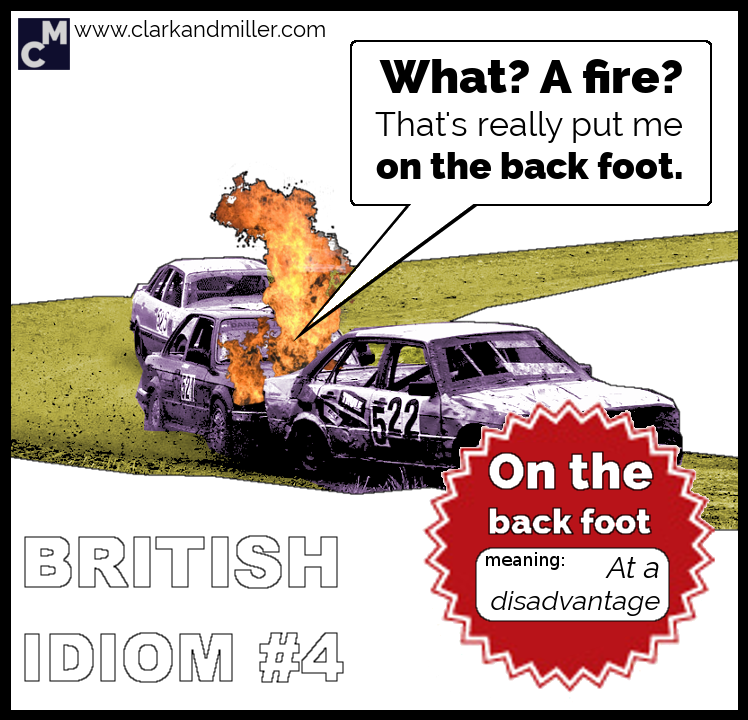 This idiom is usually used in competitive situations, like sports, politics or business.

It means “in a defensive position” or “in a losing position.”

The formula for this is pretty simple: be + on the back foot

Manchester has been on the back foot for the whole match.

Or we can use the phrase “put someone on the back foot”:

Wow! The Prime Minister called a snap election!* That’s really put the opposition on the back foot.

You’ll be happy to hear that you can use this one in pretty much any situation.

It’s particularly popular in the world of politics. You can see why, right? 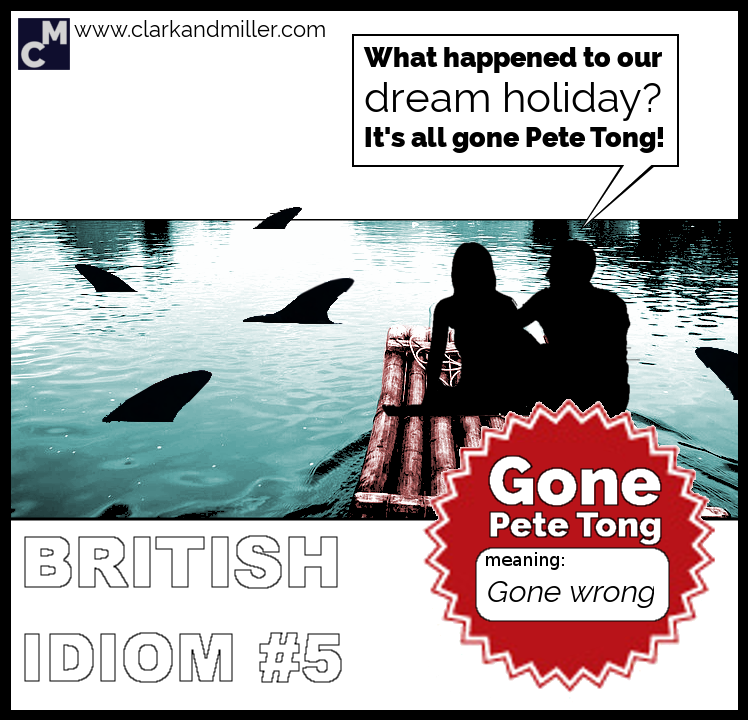 It means “it’s all gone wrong!”

This is one of those idioms that you can only really use one way, and that’s by using all the words.

So you need to say:

This one is definitely not one to use at work or with that weird-eyed woman I mentioned above. She really is weird.

That’s because this one is very informal. So stick to using it with your friends and that very nice cousin!

British Idiom #6: Keep your wig on 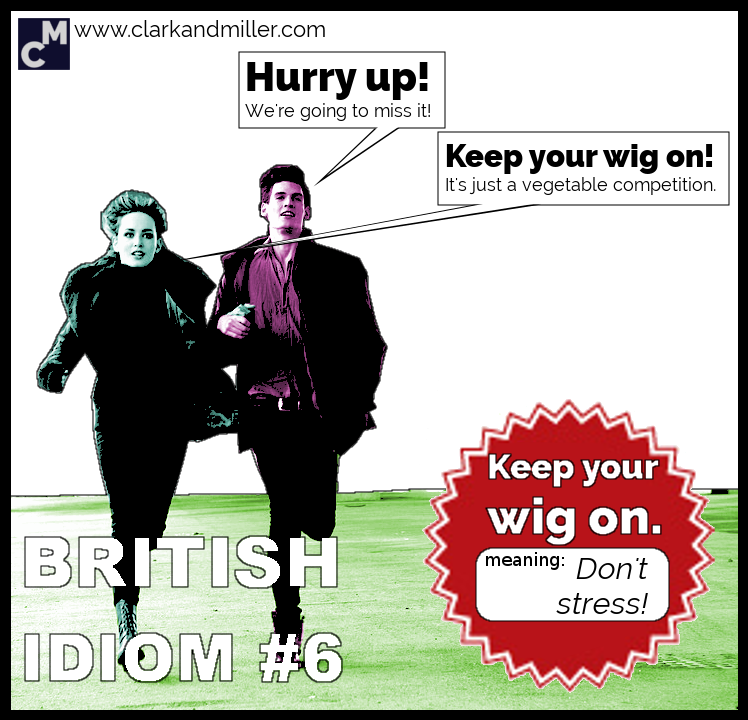 I like this one, because it’s easy to imagine someone getting so angry that he loses his wig.

Use this idiom when you want to tell someone that they’re getting angry unnecessarily.

Don’t change any of the words. This idiom only works with the exact words:

Keep your wig on.

Be a bit careful with this one.

If you use this with someone you don’t know well, they might get even more angry.

Use it when you actually want to show that you’re getting annoyed with someone for getting angry.

British Idiom #6: Have a bun in the oven 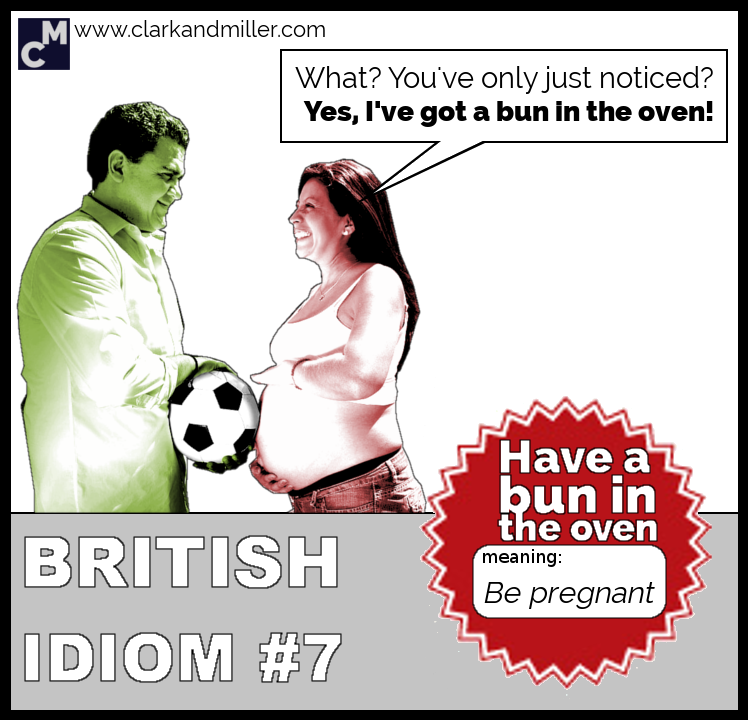 I guess the bun is the baby and the oven is the womb.

We usually use this one with “have got”:

She’s not drinking. She’s got a bun in the oven!

This is quite informal, but not too “street.”

You can use this in almost any situation except for formal ones.

This one is, however, a little old fashioned, so you might want to avoid using it with your trendy 17-year-old niece (who, hopefully, doesn’t have a bun in the oven!).

British Idiom #8: On the blink 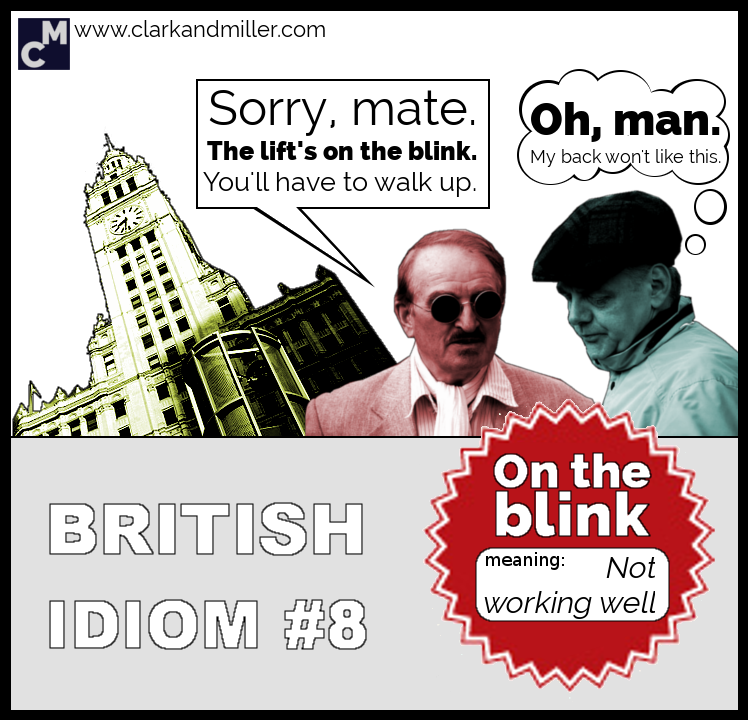 When something’s “on the blink” it means it’s not working properly. Probably because it’s too old.

There’s also a strong implication that it’s come to the end of its life. Like a computer from the ’80s or the hipster movement (I hope!).

We usually use this idiom to refer to things that use electricity, like computers, elevators or phones.

This is quite informal but totally inoffensive.

So just like “bun in the oven,” you can use it in any situation apart from when you have to go and meet the Queen of Sweden. Like you do every week, right?

So these are 8 of my favourite British idioms.

How many did you know?

Do you know any other British idioms? Tell me about them in the comments!

25 thoughts on “Do You Know These 8 Very British Idioms?”