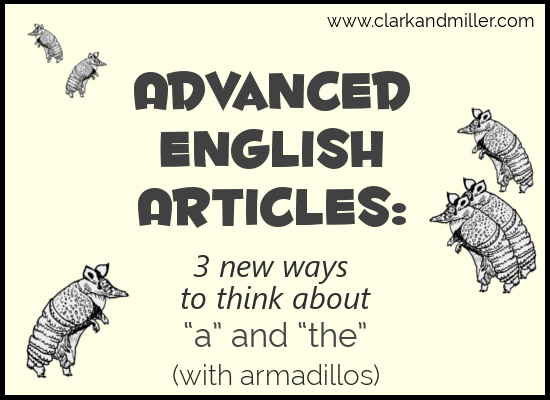 Today, you have a choice:

A couple of new ways of thinking about “a” and “the”

And here’s my favourite image from this book: 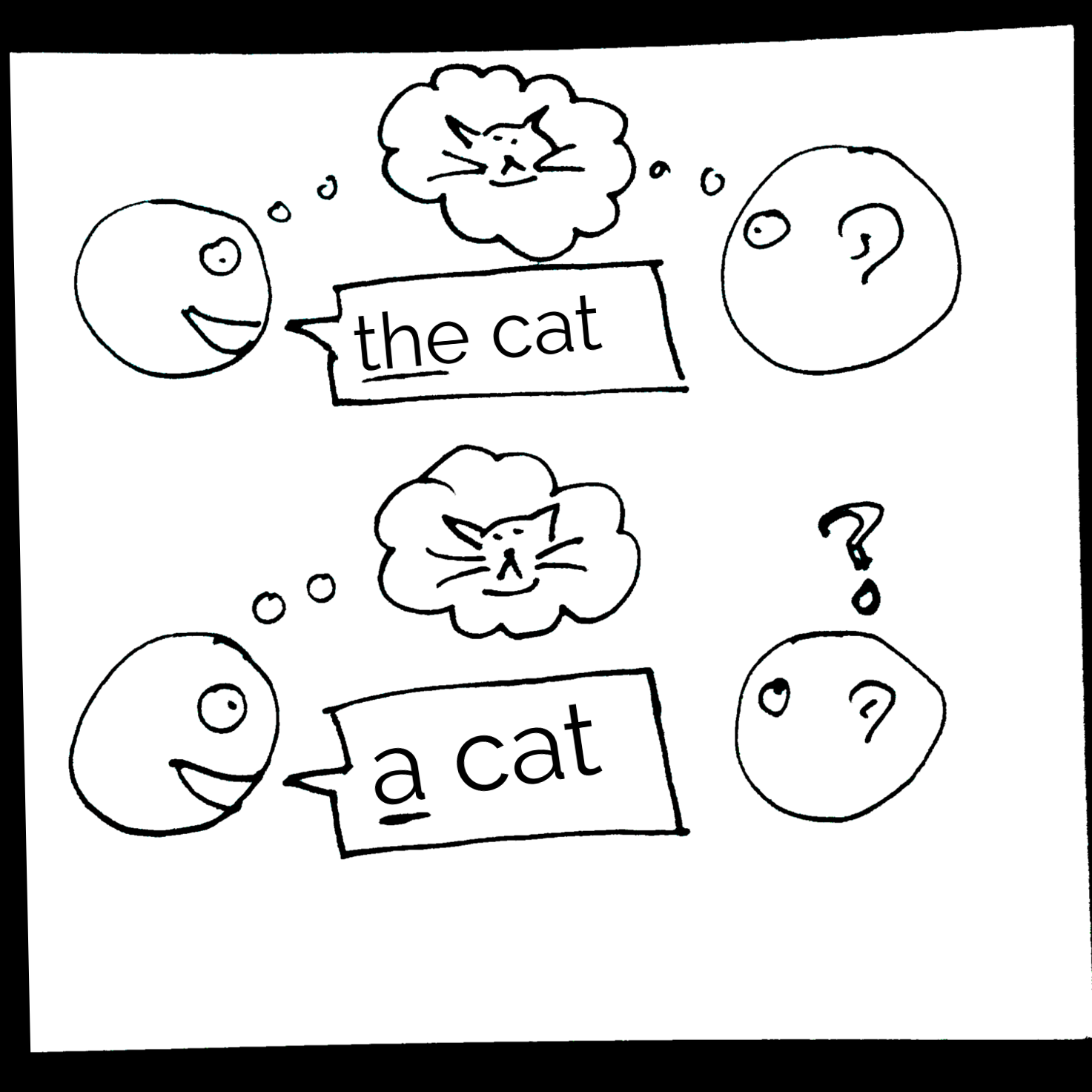 One of the reasons I like this image so much is that it shows you how language works in one simple picture.

It’s not a machine that has moving parts and all you need to do is get the right parts together and then the machine works:

It’s much more complex and interesting than that.

Language is all about relationships — the relationship between you and the person you’re talking to.

In fact, research shows that we actually create a simulation of the other person’s brain in our own brain before we decide what to say. 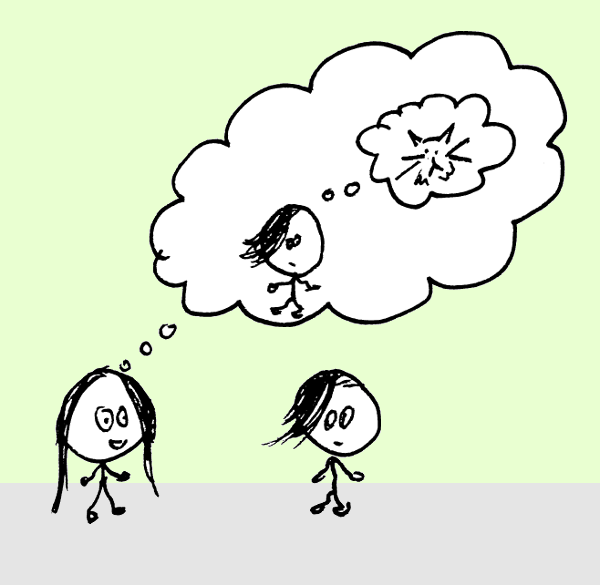 So, this means that we decide what we say — what language we use — based on what we think our listener knows.

And nothing demonstrates this more clearly than whether we use “a” or “the” (for singular nouns).

A lot of English coursebooks and teachers might tell you that we use “a” to introduce something and then use “the” every time afterwards.

And this is generally true.

However, when you’re in the middle of a conversation, are you constantly going back to the beginning of the conversation to check whether you’ve introduced the topic already?

No. We’re not consciously checking back on what we said earlier in the conversation, but we’re building a mental picture of what the other person knows and doesn’t know … and referring to that.

All we’re doing is looking at that simulation we have — what we think the other person knows. 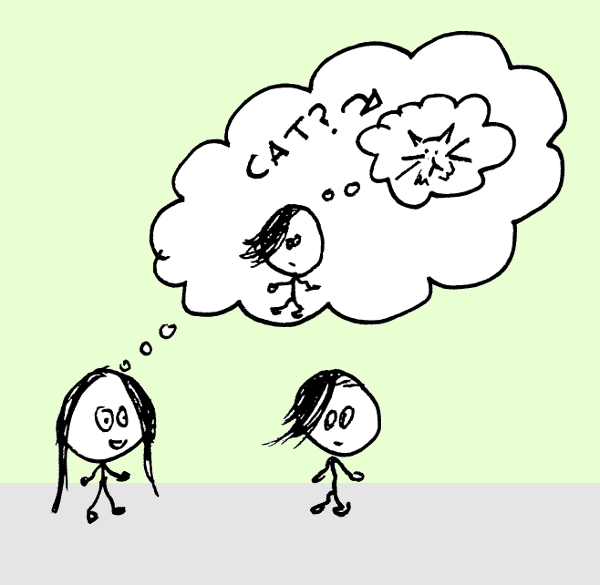 Here’s another way of looking at it.

You’re obviously very excited about this, so you give your friend Barry a call and tell him the good news.

So you throw him the giraffe line: 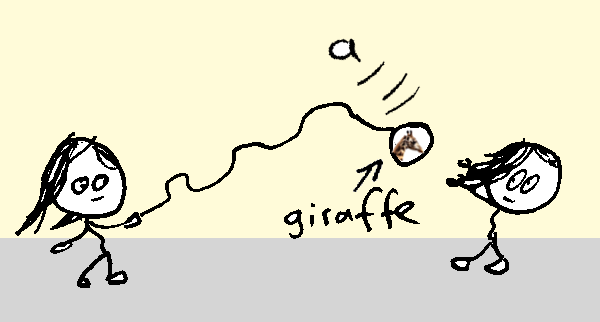 Throwing the line — while it’s still in mid-air — represents our use of “a.”

From now on, there’s a line connecting you together. The giraffe line. And it can’t be broken.

And this line represents our use of “the.” 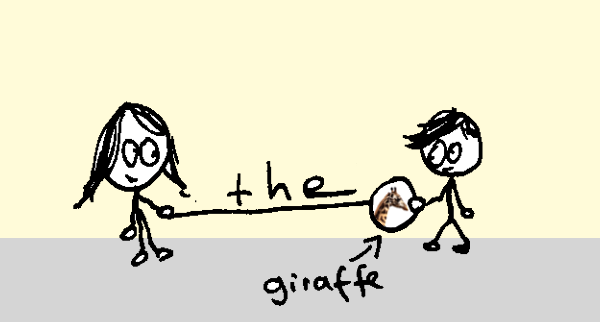 It’s like a bridge, or a USB cable, connecting your brain to Barry’s.

So that’s the basic principle behind “a” and “the.”

But there are some situations where we use “the” in other ways.

Well — we already have something that makes Barry specific (and I’m not talking about his fish-shaped hairstyle). It’s the word “my.”

A lot of languages don’t have “the,” but most of them have “this” and “that.”

So, that’s why when someone asks me the difficult question, “What does ‘the’ mean?” I find it helps to say, “It’s kind of like ‘this’ or ‘that.’”

Other ways of marking “a”

OK. This is when things get a little weird and fun.

But be careful — when we do this, we’re sending out a special signal.

We’re basically saying something like, “This thing is a little hard to describe, but it’s kind of like …” or maybe “This thing was rather surprising!”

“We were just walking in the forest when we came across this massive, beautiful waterfall!” (surprise!)

“After the lesson, he came up to me and gave me this sort of brown and gold metal box thing. I still haven’t been able to open it.” (hard to describe)

We’ve actually looked at this before (twice, I think): here and here.

But let’s look at it again — because it’s such a cool feature of English.

Basically, when you use the formula “some + singular noun,” you send a special signal.

This signal says, “I don’t really care, or it’s not very important.”

But if you say, “When I last saw Anna, she was going to some party,” there’s an extra layer of meaning around it. It’s like you’re saying, “I don’t know (or maybe don’t even care) about the party — whose it is. Where it is. I don’t care. Just leave me alone to eat this carrot cake.”

You can also use “some + singular noun” if you want to add a layer of mystery.

So if you say, “The magic dog took the children to some far and distant land,” you’re saying, “Even I don’t really know much about this place, and this is my story that I made up … it’s mysterious!”

All countable nouns have a “tab”

Let’s look at a perfectly normal noun, like “armadillo”:

Now, with “armadillo” and all other countable nouns, we don’t just use the noun by itself.

So it would be weird to say, “Armadillo is awesome,” or “My best friend has armadillo. It’s very friendly,” or “Look at armadillo next to the tree! It’s drinking green tea!”

All of these examples of “armadillo” need what I like to call a “tab.”

Look at the pictures below — the tab is the blue bit of paper.

It could be the plural tab:

e.g. “My best friend has an armadillo.”

e.g. “Look at the armadillo next to the tree! It’s drinking green tea!”

If you remove a tab from any countable noun, you’re making it uncountable.

Which brings us to …

When we do this, it’s usually to do one of two things:

Let’s look at these one by one:

If my uncle Jerry gets arrested, sentenced and put in jail for five years, how would I talk about him?

Or, if my second cousin Darleen hadn’t had an education at all, then would I say that she never went to the school or to a school or to school?

Or, if my neighbour Emil got in a fight and ended up getting surgery, would I say that he’s recovering in the hospital or in a hospital or in hospital?

Well, the question here is this: What’s more important? The status of Jerry, Darleen and Emil, or the specific buildings they’re in (or were never in, in the case of Darleen)?

The status is more important, right?

If Jerry’s in prison, what’s important is that he’s not going to be around to sing loudly at Christmas this year. Not that the walls he’s looking at happen to be light green and that the dining hall is on the third floor.

If Darleen’s never been to school, what’s important is that she might have difficulty reading, not that she doesn’t know where the gym showers are.

We’re talking about being in these places (in prison, in school, in hospital, at university and so on) as abstract states … not places.

“There’s a really ugly hospital opposite my house. I hate it.”

“Once you pass the big prison, turn right.”

“He’s donating money to this village so they can build a school.”

Because “home” is more of a concept than a place:

“Can you drive him home now?”

An armadillo vs (some) armadillo

Let’s say there was a terrible explosion by the river where your favourite armadillo lives.

I’m so terribly sorry to tell you that … alas … the armadillo was caught up in the explosion and was … there’s no easy way to tell you this … he was blown up into hundreds of small pieces … which went everywhere.

So you decide to go down to the river to clean up the horrible mess.

And by the end of the day, you’re finding armadillo in your hair and on your clothes.

See what happened there (I mean linguistically … ignore the tragedy)?

When something is broken down into pieces, or into matter, it loses its tabs (“a,” “the” or plural). It becomes uncountable.

Perhaps I should’ve gone with a cleaner and less traumatising example?

“Would you like some banana? I don’t want to eat a whole one.”

“You’ve got cake in your beard.”

Why do we use “the” with places in town?

And why do we say “a shop” but “the shopping mall”?

Well, there’s actually a pretty interesting explanation for this.

Wherever you’re reading this from, I’m willing to bet as much as $4.50 … no, make it $5 … that your experience of your local cinema is pretty much the same as mine.

You go to the desk, get tickets for the film, maybe get those 3D glasses, spend half your mortgage on some popcorn and go into a dark room full of other people and watch a very loud film.

The same with shopping malls.

Shopping malls are not real places.

You go to a shopping mall in Jakarta, Kampala or Oslo … they’re all going to be more or less the same thing.

Sure, one shopping mall might have this brand and the other might have that one. But look: they’re all selling overpriced socks, so no real difference.

And it’s the same with the baker’s, the opera, the ballet, the gym and so on.

These are universal experiences. They’re not particularly unique.

If you’re telling a friend about going to the shopping mall, you’re talking about the experience.

And, because you’re using “the,” you’re also starting off with the connection:

It’s nice — it means that you’re establishing a connection with your audience straight away. You’re acknowledging a shared experience.

If you want to introduce a specific mall, then you use “a.”

“There’s a really cool shopping mall around there — it kind of looks like a ’70s sci-fi film.”

Cafés, restaurants and concerts, however, are more unique. They’re kind of different from each other. So we don’t default to “the.”

“I went to an awesome concert on Saturday.”

Using “the” to introduce a topic for dramatic effect

I left the best for last.

Sometimes we can use “the” to introduce a topic for dramatic effect.

If you read a lot in English (You should), then you might have already seen this.

So, usually we need to use “a” to introduce a topic, right?

We need to throw the topic line:

But, if you suddenly throw in a “the” for something that’s appearing for the first time, it sends out a very strong signal.

It’s saying, “This thing is really important. It’s going to be a major part of the next part of the story. Maybe it even changed my life.”

You’re telling your audience that this is something to look out for.

“After one more hour of walking, we turned a corner. That’s when we saw the bear.”

“He wouldn’t say a word for ages. After giving him some water and letting him calm down a bit, he told us about the attack.”

The bear and the attack are both such important elements of the story that it feels like they were always there.

And you achieve that feeling by going straight for “the.”

“A bear” sounds too insignificant.

These things get an immediate upgrade by using “the.”

OK, that’s it for today.

These are not fixed rules that you have to learn but rather something for you to ponder. Hopefully, it will give you a better feel for how (and why) we use articles in English.

So take a minute to think about everything you’ve read …

… and get on with your day.

9 thoughts on “Advanced English Articles: 3 New Ways to Think about “A” and “The””