Check out this guy:

So why am I showing you a video of someone teaching English through rapping?

Back in September, I had the opportunity to interview him. We talked about the most important things you need to learn a new language, and one particular thing he said was really smart:

Have you ever read an article, book or blog post and understood it but not been able to USE the language you’d just read?

But how do we do that without getting bored?

We don’t want to read the same article, book or blog post again and again, right?

Well, I think you can see what his solution is.

Music is a great way to get the repetition we need in order to truly learn the language.

We never really want to read an article more than once, but we can listen to the same song a hundred times or more.

Now, there are a million and one blog posts out there that recommend individual songs to learn with. But I don’t think that’s enough.

In order to really take advantage of music to learn English, I think you need to “get into” a band — become passionate about a band, understand their style, feel like you know them.

Do you remember being a teenager and getting excited about a new band you’d discovered?

Well, hopefully, today I’m going to help you remember that feeling and become a teenager again.

In order to inspire you (and probably make you laugh), here’s a picture of me as a teenager: 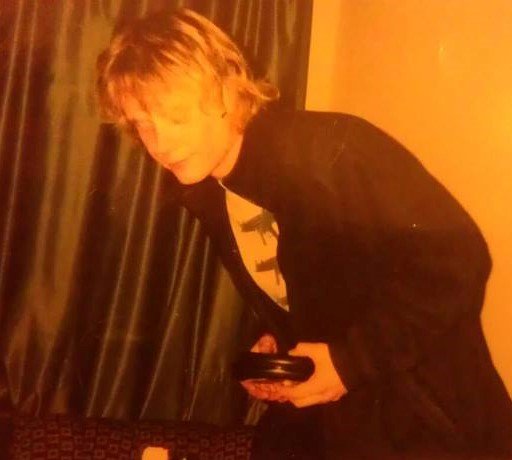 Good. Now remember that feeling because I’m going to introduce you to 9 bands that I think are great for listening to and learning English from.

Why are they good? Well, they’ve all got at least one of the following qualities:

So here are 9 bands I recommend for learning English. Chose one you like, get into it, and let me know what you learned! 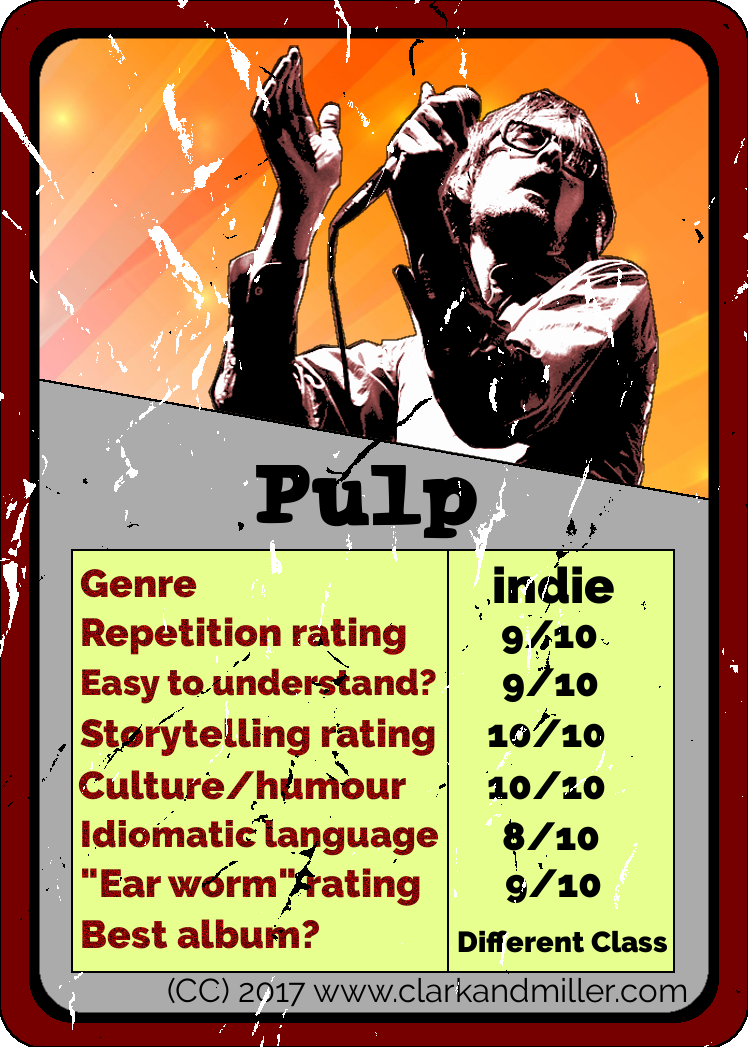 It took Pulp about ten years to become famous. But they managed it in the mid ‘90s with their very, very English disco-inspired indie.

I’m a big fan of this band, and I’ve been recommending them to my students for a long time. Why? Well, look at their ratings! They repeat a lot, the lyrics are pretty easy to understand, they tell fantastic stories which create a strong picture of working class Britain, they use interesting phrases and idioms and you’ll be singing their songs without realising it for days.

Oh, and their singer has all the charisma of 100 Hugh Grants.

You can find the lyrics here. 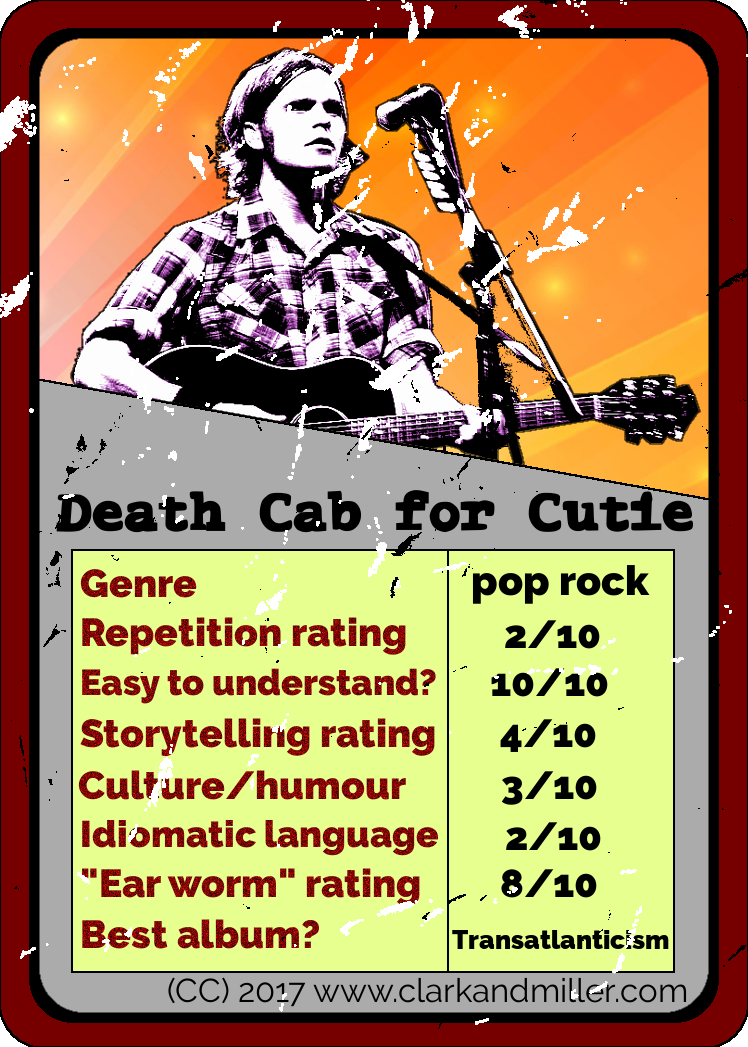 Death Cab for Cutie is one of those bands that you can just start playing and relax into. Their music is straightforward but interesting at the same time.

The main advantage of listening to this band for your English practice? The singer’s clean American accent and clear vocal style make the words very easy to hear. Some of their songs can get stuck in your head as well. 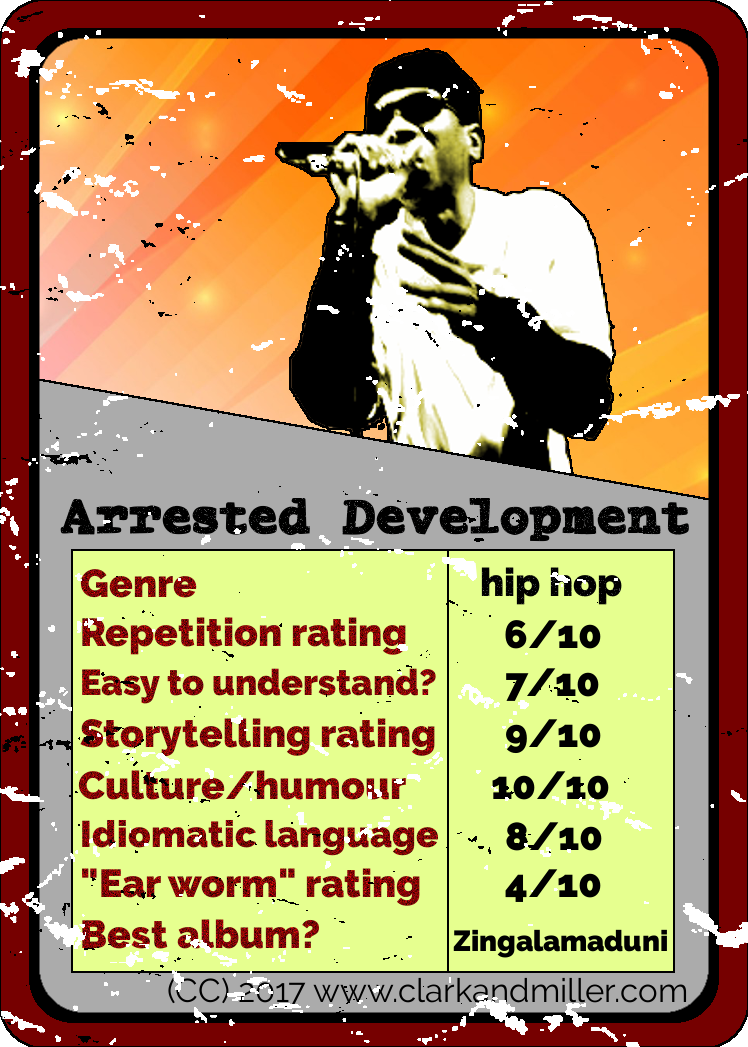 These guys are quite fun.

Back in the late ‘80s and early ‘90s, there was a short wave of “positive” hip hop. Arrested Development was one of them.

I chose Arrested Development for two main reasons: hip hop, more than most other genres, has a close connection to culture, and the band’s songs often tell great stories. 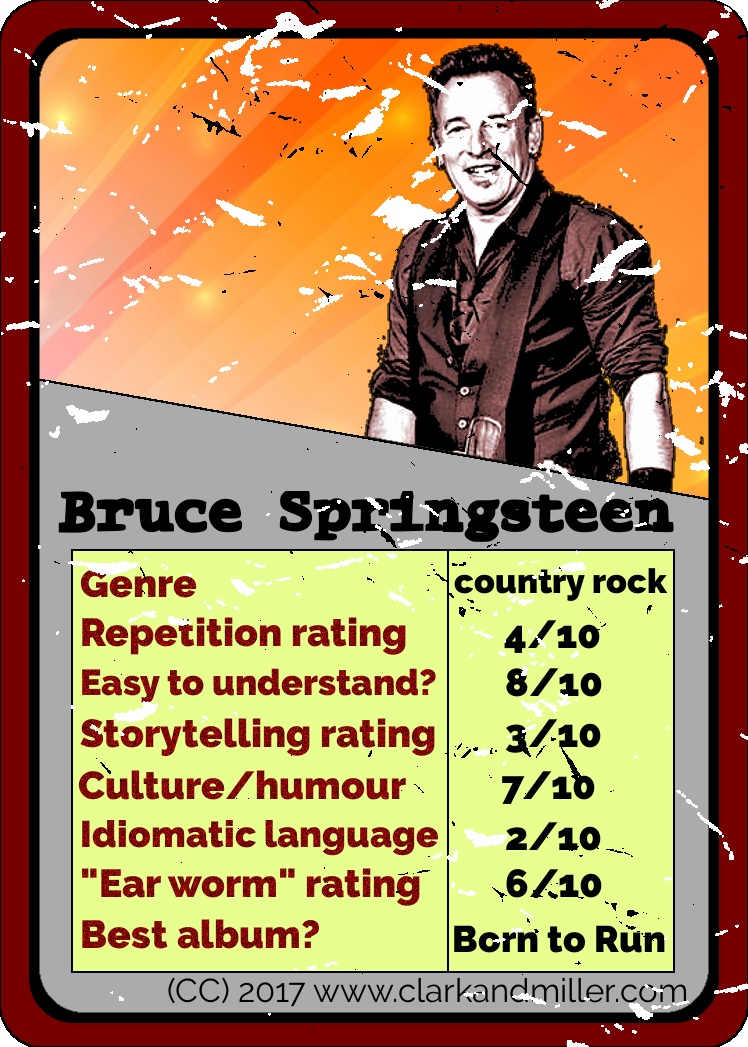 Springsteen has had a huge career starting in the 1960s and has released 18 albums.

I’m not actually a big fan of his, but his lyrics are easy to understand and, because he’s just so damned American, it’s a great insight into the soul of American culture. 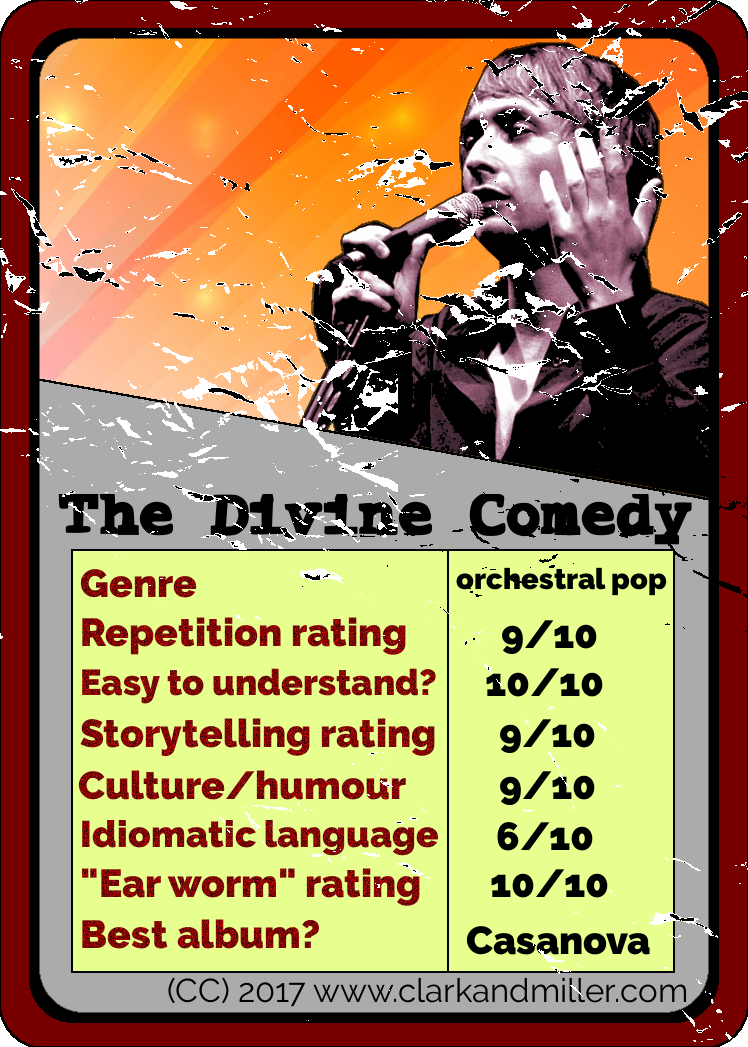 The Divine Comedy is basically just one guy, Neil Hannon. The band play an interesting mix of pop, indie and orchestral songs. I feel they’re a bit like Frank Sinatra, except enjoyable.

The main advantage of The Divine Comedy is that the lyrics are both simple and easy to follow. They also usually tell interesting stories, have a great sense of humour and will be stuck in your head for weeks. 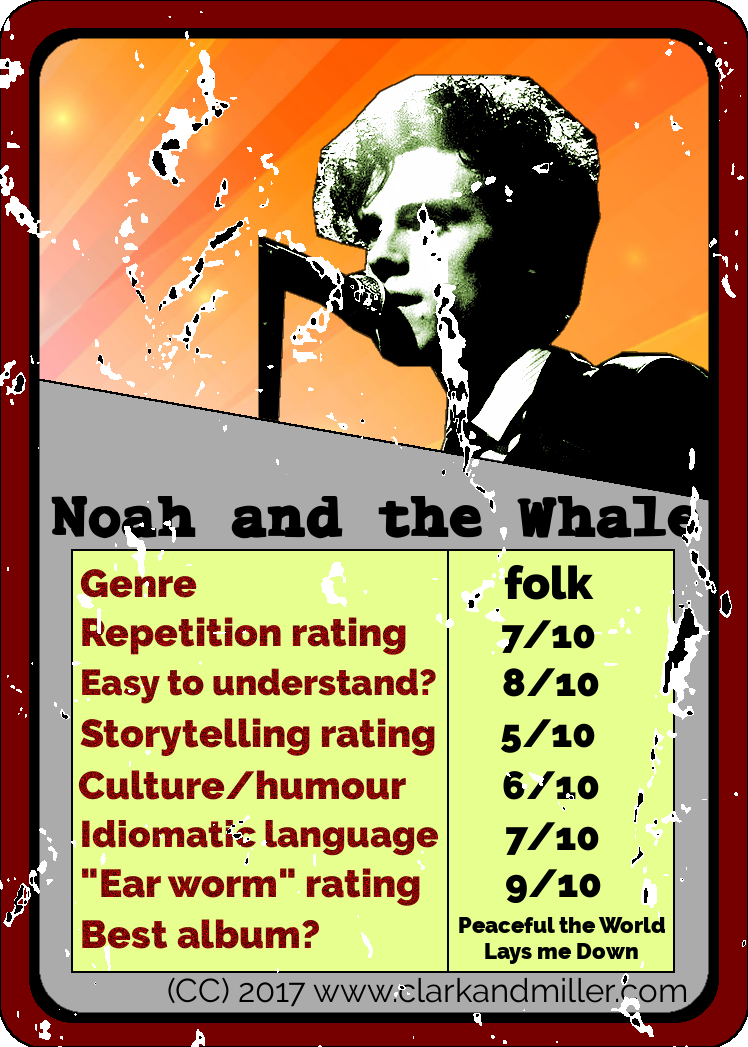 Even though this band takes a lot from American country music, there’s something very English about them, too. They basically wrote “feel-good” folk rock songs.

A major focus of folk music is the lyrics. As a result, Noah and the Whale make sure you can hear what they’re singing and, as a result, are really easy to follow. Their songs are also serious earworms.

Noah and the Whale – “5 Years Time” by cherrytreerecords 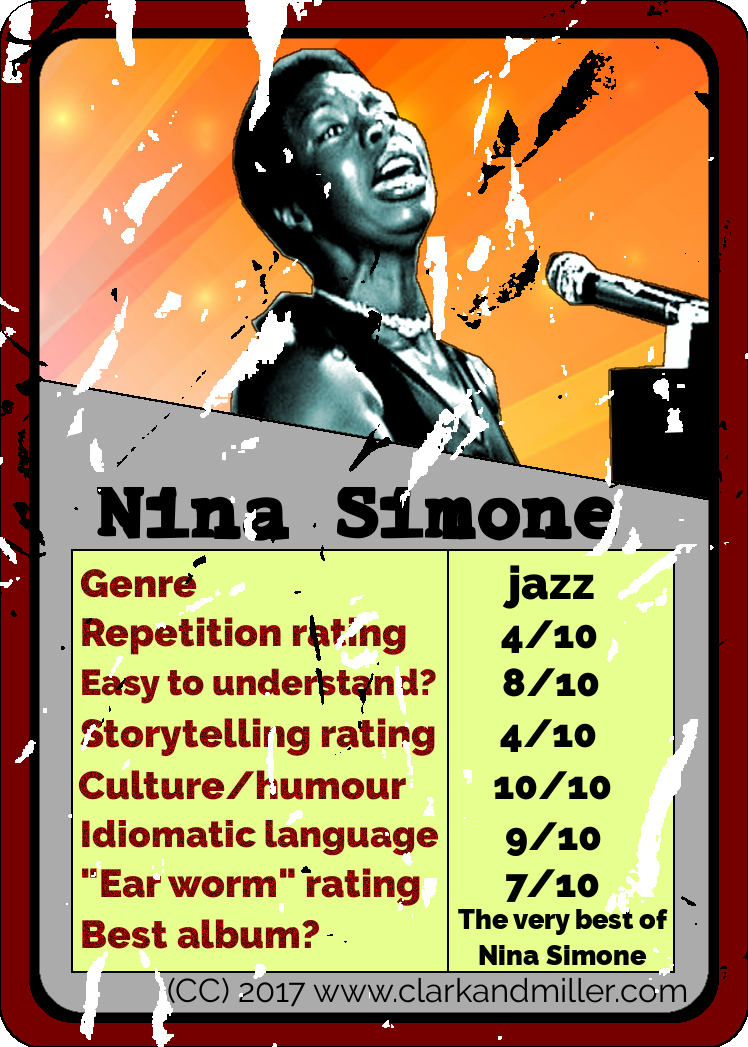 Simone is a legendary singer-songwriter who used a mix of styles, including jazz, R&B and classical. She also had one of the most recognisable voices in music history.

Although her songs aren’t great earworms, her lyrics are quite easy to follow. The words and phrases she uses in her lyrics are also really useful to get a feel for American English.

Her song Feeling Good is a nice place to start. Find the video here (and the lyrics here). 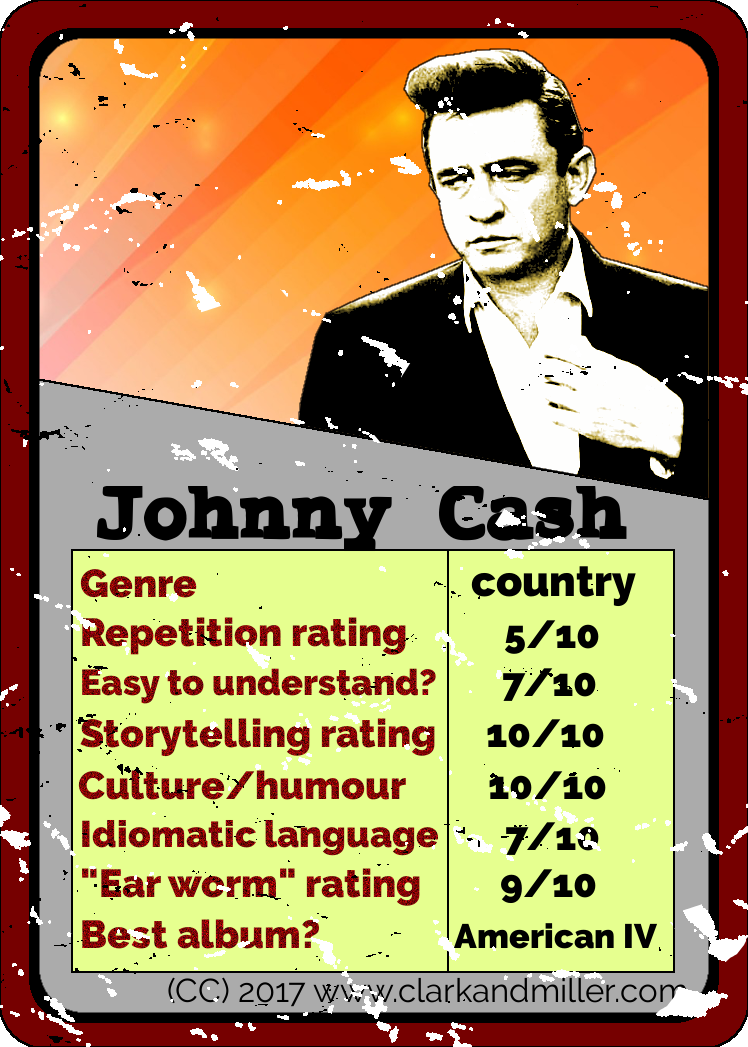 Cash is one of the most important musicians of the 20th century. Although he started out as a country and western singer, in his later years his music started taking all sorts of other directions.

His songs are pleasant earworms, but more importantly, like Springsteen, Cash reflects the heart of American culture with his great stories, which are mostly about killing people and then feeling guilty about it. 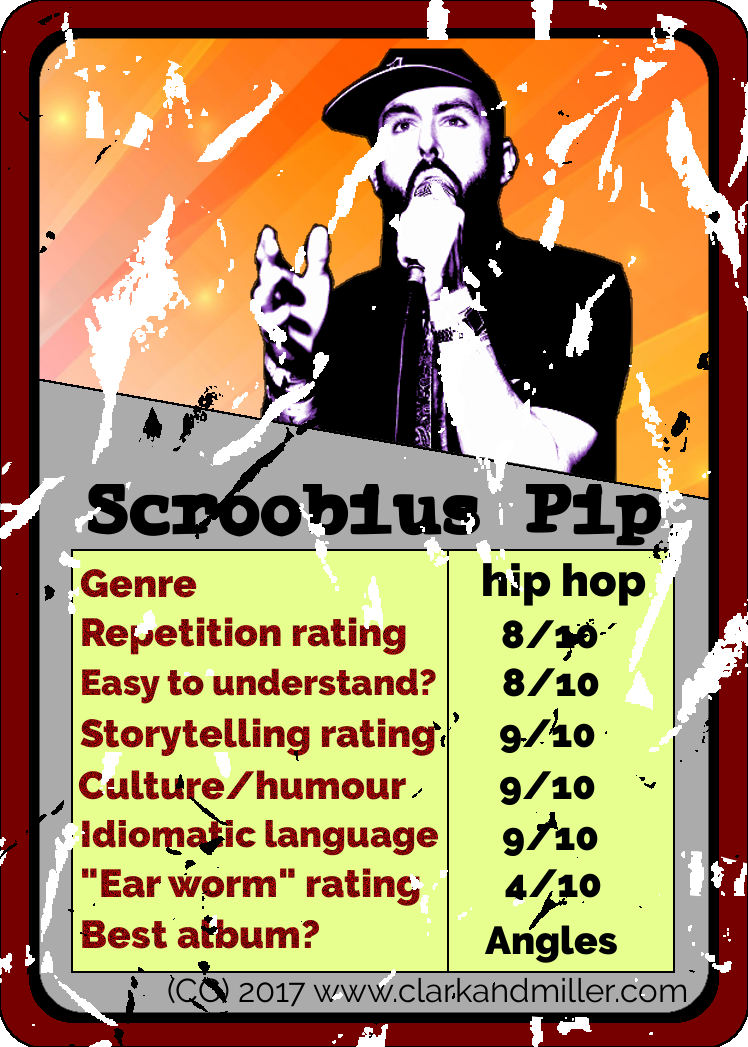 Well, we had an American hip hop band on this list, so I thought it’d be fair if we had a British one, too.

Scroobius Pip comes from a poetry background but tells great stories through his hip-hop project.

Why is this good for learning English?

Again, Scroobius Pip scores highly in almost every rating: He’s quite repetitive, easy to understand, tells a great story, provides an insight into British culture, and he uses a lot of idiomatic phrases.

I’ll admit that because it’s poetry, it might be a bit tricky to understand the full meaning, but just relax into it, enjoy it, and soon enough you’ll be singing (rapping?) along.

So what are you waiting for? Go ahead and check out one of these bands.

But before you do, remember: This isn’t like studying. You don’t need to understand everything.

You don’t even need to understand any of it at first.

The first thing you need to do is enjoy it.

Which bands have helped you learn English? Write them in the comments below to help others get into learning English through music.

Also, have you got any friends who like music? Go on, share this with them. They’ll love you for it!

2 thoughts on “9 Bands to Improve Your English”