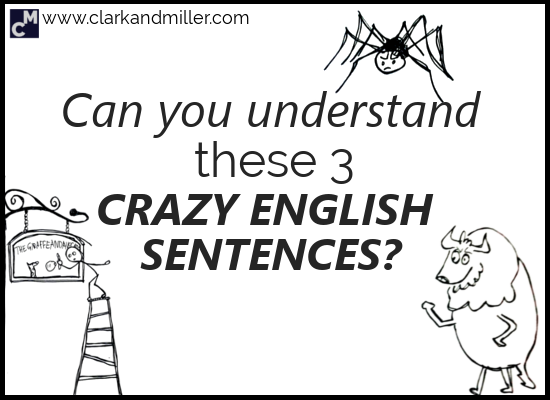 Today we’re going to look at some strange English sentences that are actually grammatically correct. You might also like Can I Improve My English Online? 7 Websites You Will Love.

Take a look at these three weird English sentences:

Today I want to show you how these strange sentences work.

After you’ve read this post, you’ll have a better understanding of how English works.

You’ll be able to understand some complex grammatical structures, and you’ll have some new, exciting advanced vocabulary.

But most importantly, you’ll be able to impress people at parties.

And here’s a cube. I’ll just put that next to the cone. 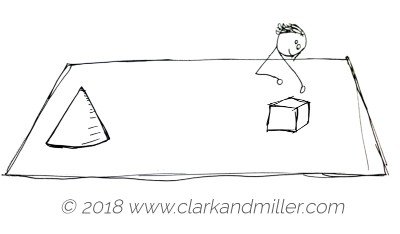 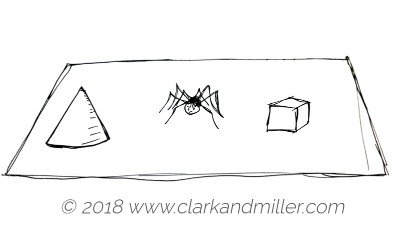 But where is it?

Right! The spider is between the cone and the cube.

Now let’s say I don’t want the spider near my lovely cone and my lovely cube. So I’m going to build two little walls to stop the spider.

So where do I want them? 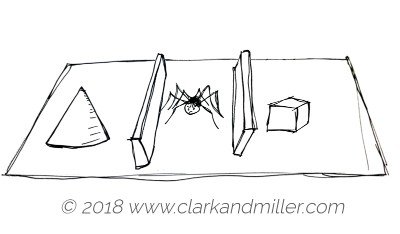 Now, where are the walls? 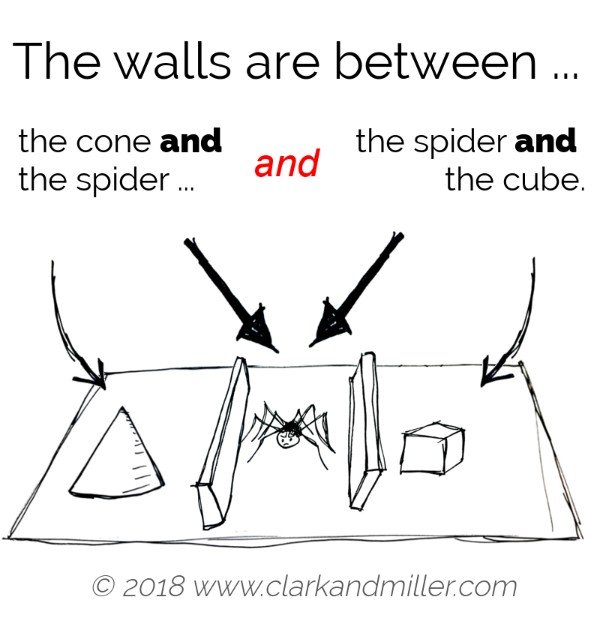 By the way, I know what you’re going to say: Spiders can climb walls; walls won’t help.

You’re right – but these are special spider-proof walls. Trust me on that one.

OK, let’s forget about cones and cubes and spider-proof walls.

Let’s imagine I’m opening a pub. I’m going to call it “The Giraffe and Avocado.”

Everyone knows the most important part of a pub is the pub sign. 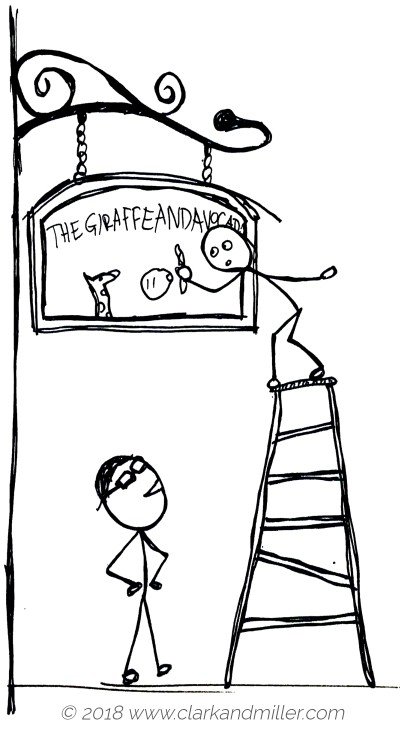 But he’s a little quick and he paints the words too close together.

So I ask him to do it again with more space between the words:

It’s basically the same sentence as the spider and walls sentence:

Phew! We got there – but it was worth it!

OK. This one is going to need some real explaining.

But after that, you’re seriously going to be able to impress your friends.

What’s more, you’re going to pick up some advanced grammar.

And a little past perfect practice on the way.

So let’s start with that.

Here are Seda and Masha: 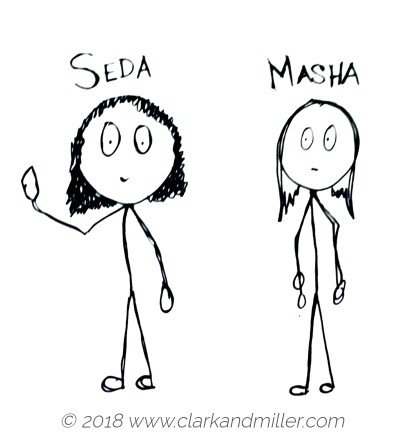 Today, they’re taking a test – the Clark and Miller quiz on British English signs, to be precise.

Then they come to this question: 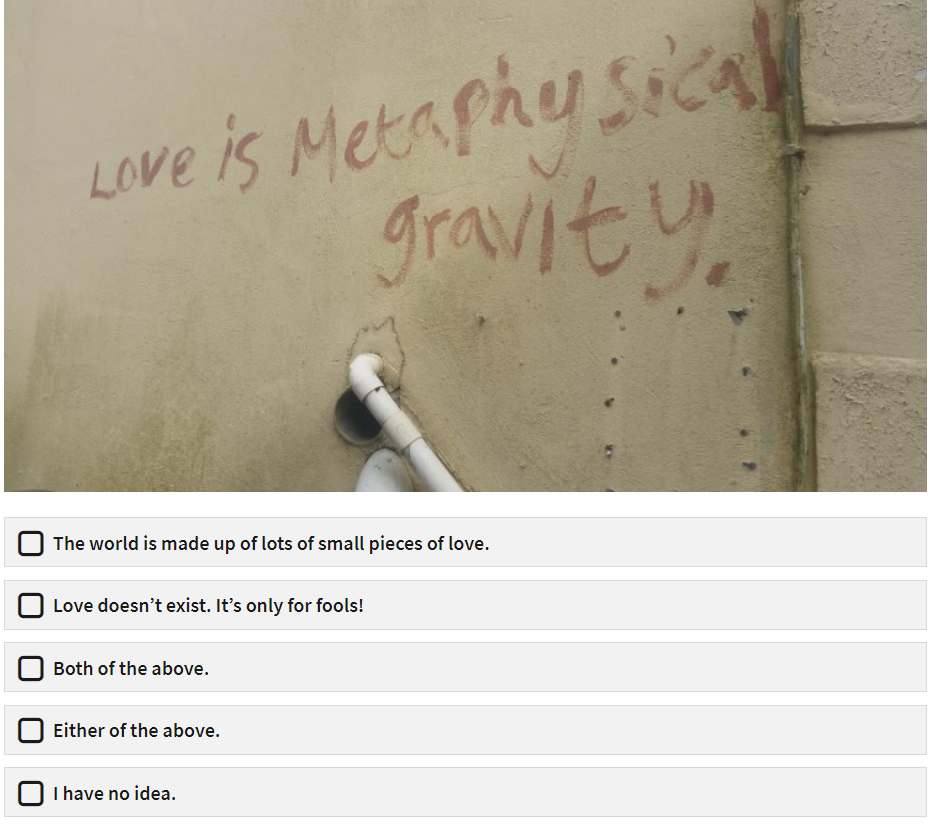 Seda isn’t sure of the answer and clicks on “both of the above.”

Masha also isn’t sure of the answer and clicks on “either of the above.”

Seda and Masha were at the same place in the test – but they both chose different answers.

They both looked at the same situation and made a different decision.

When we have a situation like this — comparing two different decisions for the same thing — we can use this formula: 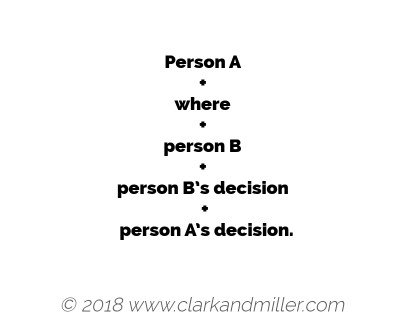 So for Seda and Masha, that means you can say: 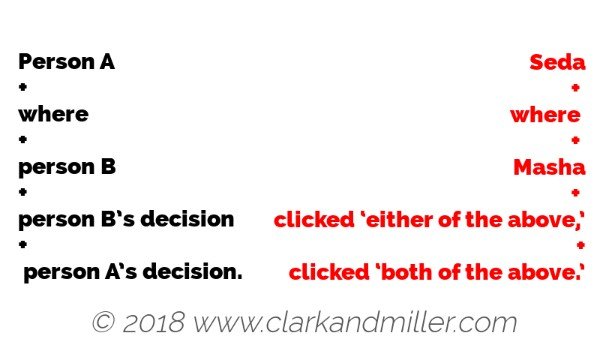 So what about Peter and Paul?

OK – so Peter and Paul are also doing a test. 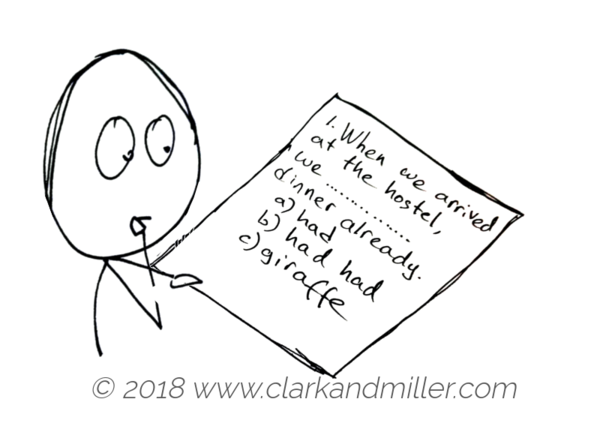 In this test, Peter wrote “had had,” and Paul wrote “had.”

Yesterday evening, Peter and Paul’s teacher was looking at their test answers.

(See where I’m going with this?)

For the question about the hostel and the dinner, he saw that Peter had had “had had,” and that Paul had had “had.”

He also saw that Peter was right, so he was more pleased with Peter’s answer.

So let’s use Seda and Masha’s structure: 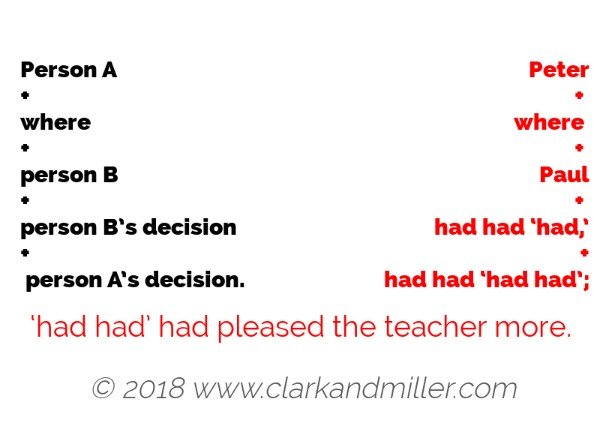 Wahey! We got there!

OK. The first step here is to separate these buffalos.

In this sentence, some of the buffalos are nouns, some are places and some are verbs.

Let’s look at each type of buffalo.

The noun “buffalo” is an animal. It’s sort of a weird cow. It lives in America: 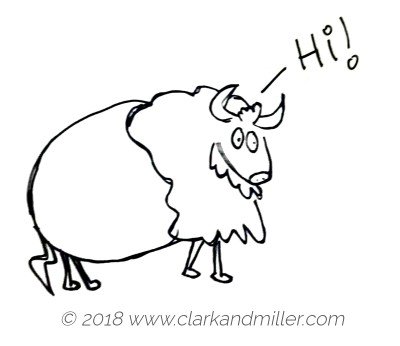 By the way – the plural of “buffalo” is “buffalo.” This is important, and you’ll see why later.

There’s also a city in the States called “Buffalo.” I’m guessing it was named after the animal. 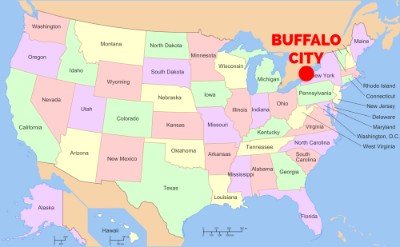 Finally, we have a verb, “buffalo.”

It means to intimidate or to make someone feel uneasy. 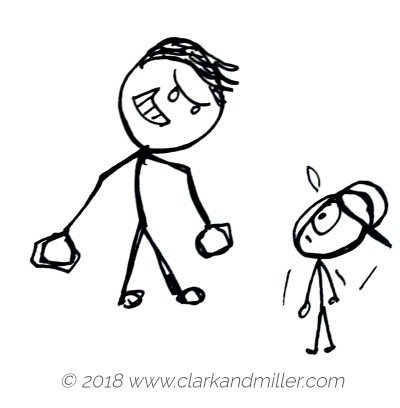 OK. But how do we get eight of these into one sentence without anything else?

OK. Let’s say we have a group of buffalo (the animal).

Where are they from? From the city of Buffalo, of course!

So we can call these guys Buffalo buffalo: 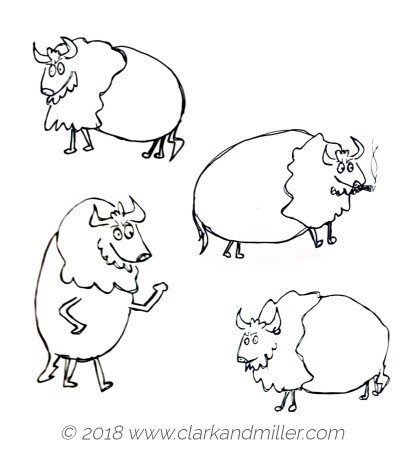 Look at them! These Buffalo buffalo are tough, hard guys. They’re into motorcycles and talking about football and stuff like that.

But Buffalo’s a big town, and there’s another group of buffalo in Buffalo. 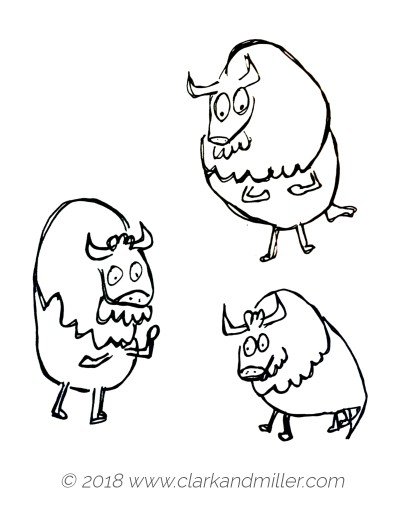 So what happens when these different Buffalo buffalo meet each other?

This happens all the time, so we can say: 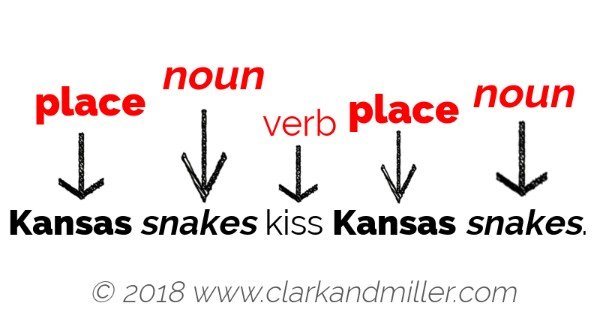 Same thing with the buffalo: 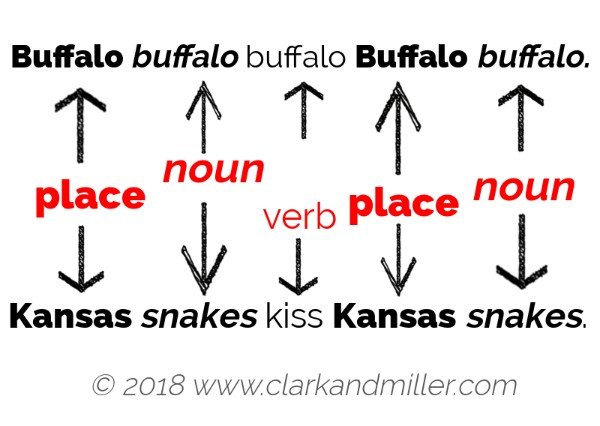 OK – so that’s five buffalo. What about the other three?

To see this clearly, let’s turn to our snake example.

Here’s are some sentences that should make sense to you if we build them up one by one.

Let’s look at it as a conversation: 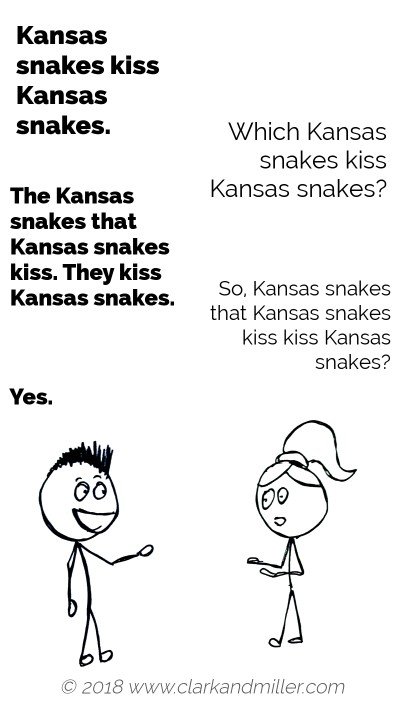 Now, let’s leave Kansas and its loving snakes and go back to Buffalo with its scary buffalo.

Before I finish, I’d like to ask you a question.

Do you have funny sentences like this in your first language?

I remember when I was learning Turkish, I discovered a lot of them.

My favourite is this one: “Bu mum umum mum mu?” (It means “Is this candle a public candle?”)

I’d love to hear sentences like this in other languages.

Tell me about them in the comments!

11 thoughts on “Can You Understand These 3 Crazy English Sentences?”