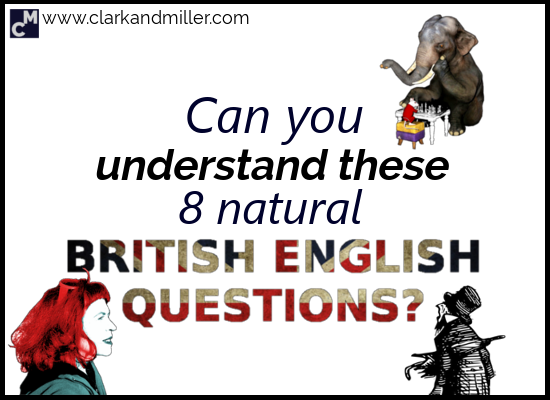 Today you’re going to hear 8 tricky questions that a British English speaker might ask you. Also check out 7 Things British English Speakers Say That Your Teacher Told You Not To.

Sometimes British people can be really difficult to understand, right?

In my experience, most English learners tend to prefer British English but find American English easier to understand.

When I see learners speaking to Americans, they tend to look like this:

But when they have to talk to a Brit (a British person), they look more like this:

It’s important to remember that this is a generalisation and only based on my experience. Either way, Brits can be really difficult to understand…

Until now! Because here I am revealing the secrets of “deep English”!

You can thank me later. With cake!

Before you read the post, have a listen to these 8 British English questions. Can you work any of them out (guess the meaning)? Don’t worry if you can’t, we’re going to look at them later.

So here we go: can you understand these 8 natural British English questions?

So what does it mean?

This one simply means “What are you talking about?”

This is both very informal and quite direct. (Notice that we even drop the word “are” in the question.) It’s best to use this with friends or people you feel relaxed with.

Let’s imagine your friend has been telling you a story about his excellent evening with Terry the Giraffe. He’ been talking for ages, but somehow he isn’t making any sense.

One minute he’s describing being in a park with Terry, and the next minute they’re on a plane to Sri Lanka.

Then Terry isn’t a giraffe but a large mouse.

None of this makes any sense.

So that’s when you can use this phrase: 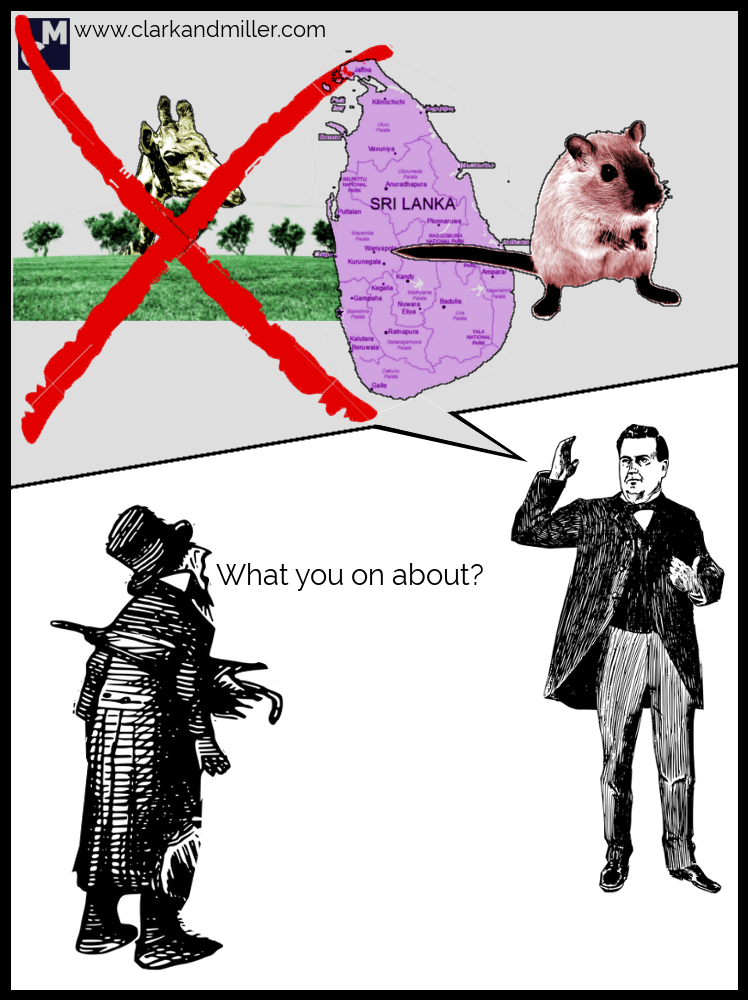 This one simply means “What are you doing?”

Yep, English is so weird that two very common words, “up” and “to,” can be combined to mean “doing.”

I don’t know why, either.

So unless you work in an extremely relaxed atmosphere, it would be good to avoid asking this question to your boss.

However, you’re probably fine using it with colleagues.

You can use this question whenever you want to say “What are you doing?”

So you might be having a chat with one of your colleagues and you might want to ask:

“What you up to this weekend?” 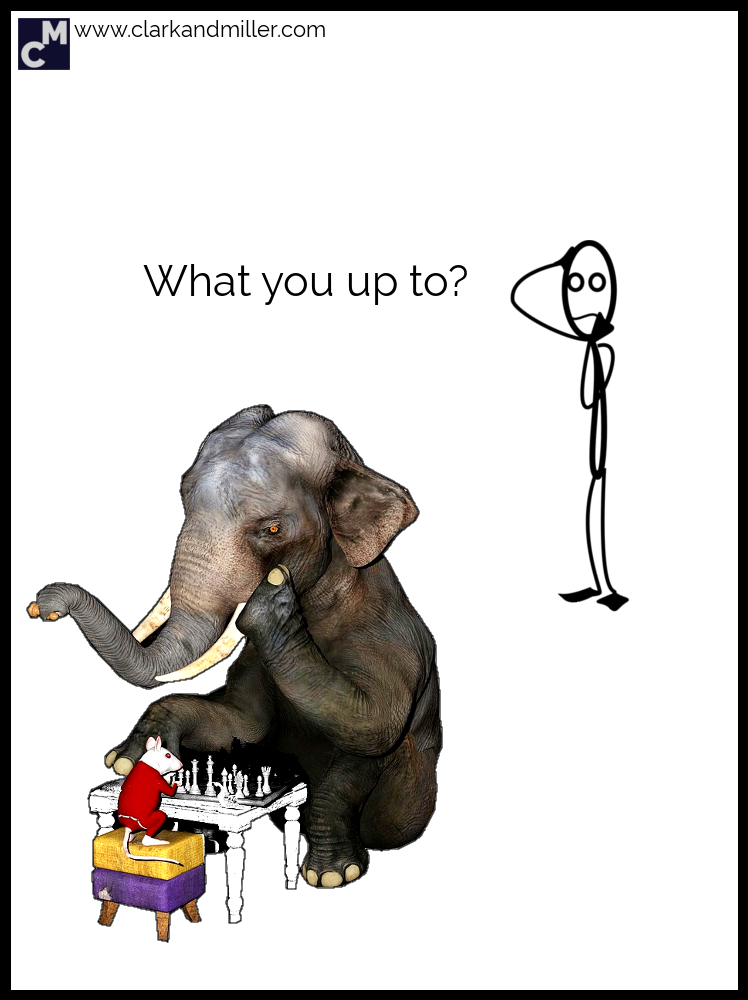 …and you’ll want to ask “What you up to?” (The answer is obviously “elephant chess.”)

By the way, you can also use the phrase “get up to” in the question “What did you get up to last weekend?” — a perfect Monday morning question.

You can also use “Is Karl around?”

It’s not totally formal, but most places I’ve worked would consider it fine.

Just use it when you want to ask if Karl is nearby.

But if you’re not looking for Karl, then don’t use it.

Just kidding — you can change the name if you like.

This one just means “Where are you going?”

This one’s a little informal, so probably not with your boss, but it’s fine with your colleagues.

Just go for this one if you want to say “Where are you going?” It’s that simple!

You can also use this phrase in the positive if you like:

“I’m off to the shops. Does anyone want anything?”

This means “Why is he behaving differently from normal?”

Again, this is rather informal, so if you work in a formal environment, don’t use this at work.

Use this when you want to ask about someone who’s behaving either strangely or differently from normal.

For example, you work with Sam.

Sam’s a great guy. He’s always in a good mood — or at worst, he’s just polite.

Then you go to work one day, say “hi” to Sam, and he completely ignores you.

You see him again later and he shouts, “GO AWAY!” in your face.

You want to find out why he’s behaving so strangely, so you ask Ted. (Ted’s another colleague. He works in IT, if you’re interested.)

That’s when you can use this phrase: 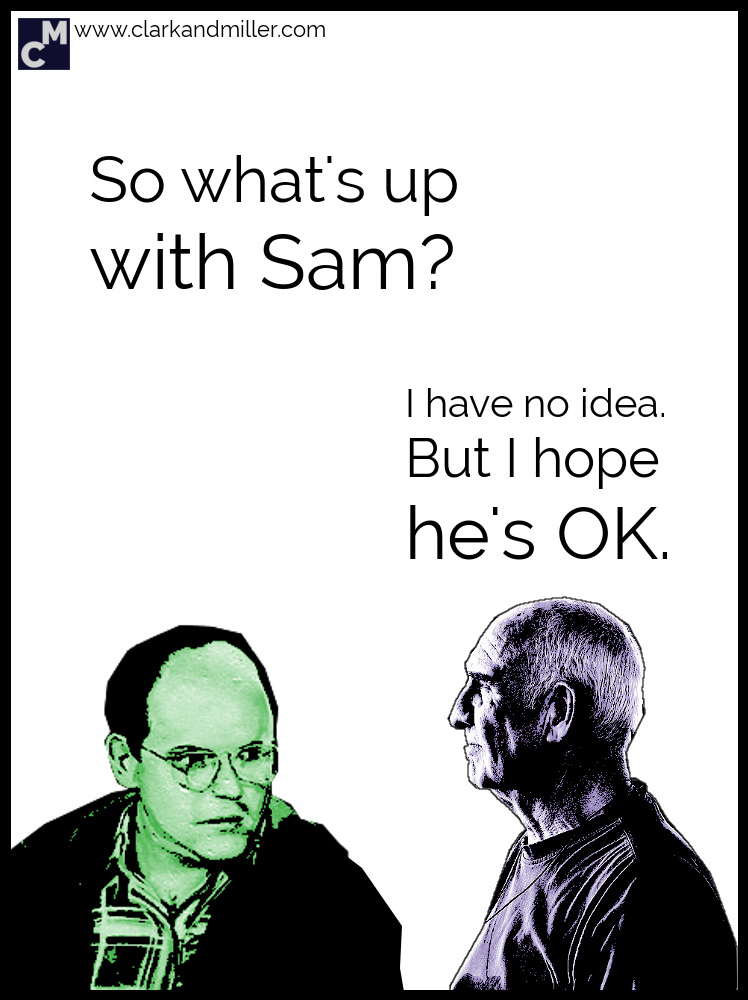 There are two reasons why this is the right question for this situation:

This one also has a very simple meaning.

It means “Do you want to visit me? At my house. Where I live.”

You can also say “Wanna come round?”

Yep. But only if you want your boss to visit you, of course. Be careful what you wish for, that’s all I’m saying.

This one isn’t complicated.

Instead of saying, “Do you want to come to my home?” which sounds really unnatural, say, “Wanna come over?” — much more natural!

Although this is usually used for home visits, you can also use it if you’re asking someone to your workplace or even someone else’s home. Just make sure the other person knows where you are, or things could get messy.

OK. This one can be a little aggressive, but among friends, it can also just be a bit of fun — you know, in that way that some people like to form social relationships by calling each other names and punching each other in the shoulder. Not my style, but some people seem to like it.

It means “Are you saying that to try and make me feel bad?”

No. Just… definitely no!

This is probably the most confrontational phrase on the list.

But I’m including it because people use it all the time.

Just remember, it’s all about the way you say it and who you say it with.

If you use it in a light voice (check the audio above) and with friends, it can actually be quite fun.

Let’s say you’ve just dyed your hair. It was brown, but you’ve gone for an awesome shocking red. Good work by the way; it looks fantastic.

Then, in conversation, one of your friends starts talking about how “some people are so fake,” and that they “should be happy about being natural instead of trying to change their appearance.”

Now, you know that your friend isn’t talking about you. She probably just forgot that you’ve dyed your hair.

But this is an opportunity to have a bit of fun. So you can use this phrase to embarrass her a bit: 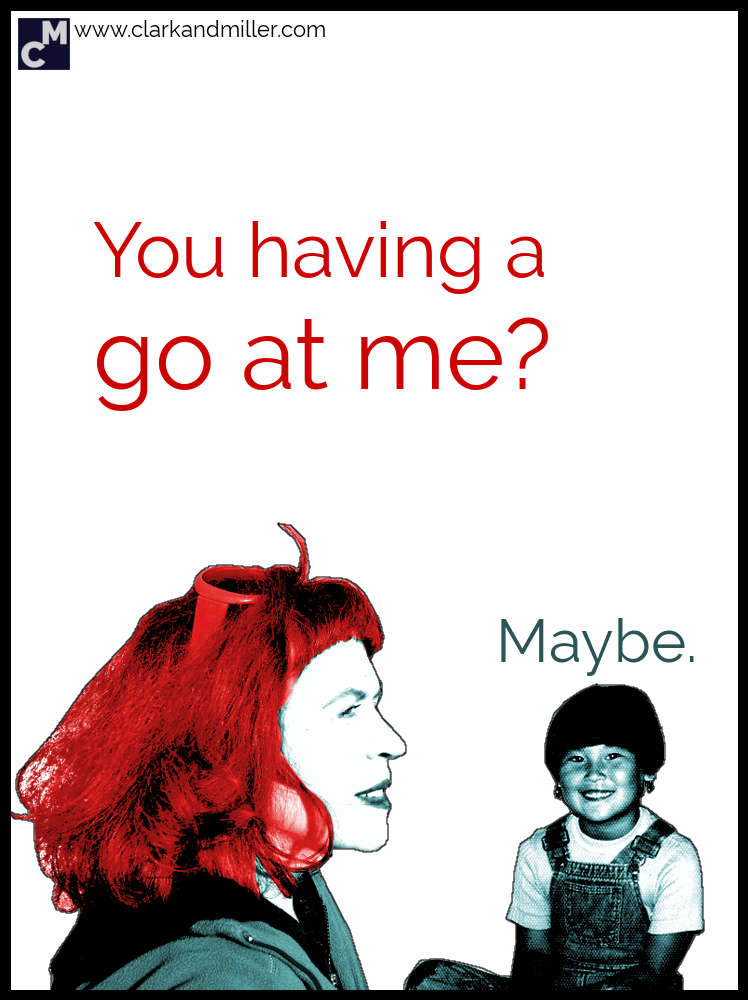 This is very simple. It means “Shall we finish this (and maybe go home)?”

In fact, this is the only question from today’s post that you can use with your boss, even if you work in a formal environment.

This one is business friendly!

You know those kinds of meetings.

You’ve all discussed everything you need to discuss.

You’ve all asked questions about the things you’re not sure about, and those questions have been answered.

But there’s always that guy.

You know the one — the guy who loves to talk.

This is a sure sign that the meeting is finished, right?

This is when you can slip in this phrase: “Shall we call it a day?”

It’s a great way to finish things up without being too sudden and final.

You can also use this in any situation when you’re working on something with someone, and it’s reached its natural end.

So there we go.

Hopefully, the next time some British guy approaches you making strange sounds from his mouth, he might actually be asking one of these questions, and, hopefully, you’ll be able to answer him!

Have you noticed any other weird things that British people say?

Tell me in the comments. It’s great to share the knowledge!

Also, if you enjoyed this post, please be awesome and share it. Let’s make British English easier to understand for everyone!

12 thoughts on “Can You Understand These 8 Natural British English Questions?”