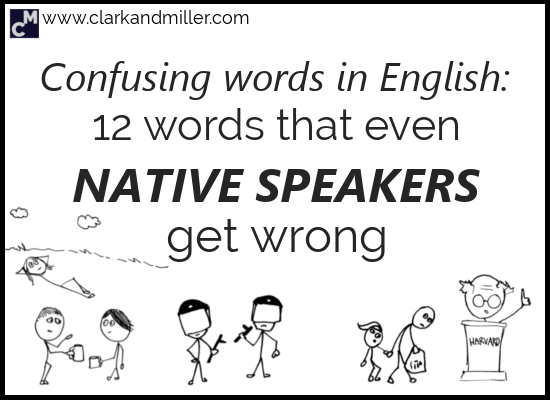 There are lots of confusing words in English — words that even native speakers of English use incorrectly.

Can you tell me the past tense of “lay”? What about “lie”?

Is it “less people” or “fewer people”?

Let’s take a look at the difference between some of these commonly confused words in English.

By the year 2050, the word “fewer” will disappear from English.

Why do I think this?

Well, so many people mix up “fewer” and “less” that I think the wrong form will become normal and then standard. It already seems to be happening in the US. And that’s fine — that’s how language develops.

So what’s the difference between “fewer” and “less”?

These two words actually mean the same thing (the opposite of “more”), but the difference is in the grammar.

The rule is simple:

Use “fewer” for countable nouns and “less” for uncountable ones.

That’s why we can say:

“So you’d have fewer mice (and more food) in your kitchen if you got a cat. You’d also have less noise.”

But we can’t say:

❌“ came to see my new giraffe than I expected.” 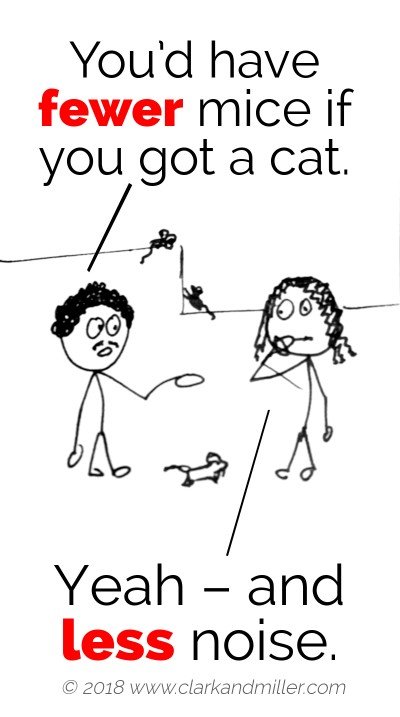 OK. This one can be confusing — but it’s easy if you think about it the right way.

When we use it, we almost always say where we’re lying:

“He spends all day lying on the sofa and thinking about unicorns.”

“Lie” is a common verb, right? Even if we don’t use it every day, we certainly do it every day. (Unless you’re a horse, in which case you sleep standing up. Also, why are you reading this blog?)

Now, an interesting thing about English is that the most common verbs tend to be irregular (do, did, done; think, thought, thought; eat, ate, eaten, etc.).

So, when we use it in the past, we can also say:

“She lay in the grass thinking about tanks.”

But there’s another “lay.”

“He lays the bike carefully on the grass and starts climbing the tree.”

This less common word is, you’ll be pleased to hear, a regular one: lay, laid, laid.

Here they all are: 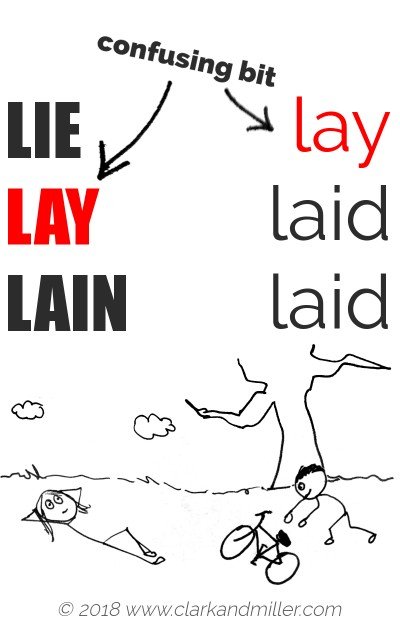 Have you been on social media recently?

There’s a lot of mad stuff that some people share.

Stuff about how aliens have landed and want to be taken to the nearest U2 concert.

Or about how if you bury your iPhone 7 for a week, it’ll upgrade to an iPhone 8 (if you sing loudly enough).

Of course it’s all nonsense. You go to check the evidence, and you find none!

These stories (and the maniacs who write them) are not authoritative. They’re not trustworthy.

We usually use “authoritative” with sources of information:

So “authoritative” is a positive thing, right?

Authoritarian? Not so positive.

An authoritarian government or state or school or headmaster or police force is hard.

They have strict rules, and if you disobey them, they’re coming to your house to make you disappear for a long time.

An authoritarian country has very little personal freedom and is very probably undemocratic.

These are particularly confusing words — it’s amazing how just one letter can make all the difference.

If you don’t have something that you need, then you’re deprived.

Perhaps you live in a deprived neighbourhood — a poor part of town that doesn’t get a lot of support from the government — no buses, perhaps even no running water.

You might also be deprived of sleep because your cat enjoys walking on your face while you’re in bed.

“Depraved” means “morally corrupt” or “ethically not OK.” We use it to describe people.

If someone’s depraved, they do terrible, unethical things.

Finance is the general management of money.

You can study finance at university.

Or the government Finance Minister can give all the tax money to banks because that’s how things work these days, apparently.

But what if you want to talk about your personal financial situation?

That’s when we take the uncountable “finance,” and make it countable and plural: “finances.”

We usually specify what kind of finances we’re talking about:

You can talk about how the family finances are doing well.

Or you can say that you’re totally in control of your personal finances.

Sometimes divorcing couples have legal issues over their finances. 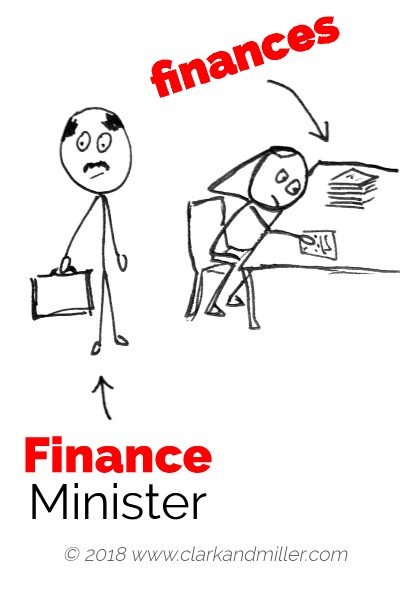 “Interested” can mean a few things, and you know one of them, for sure.

It can be that state of curiosity — when you really want to know about what’s happening. Like how that elephant ended up on your balcony.

But there’s another meaning that’s not very common.

Imagine you’ve just found €100, and you decide to put that money into the stock market. So you invest it in a random construction company called Bob’s Buildings.

Now what are you going to be doing for the next few months? You’re going to be checking how valuable Bob’s Buildings is — has the share price gone up? Has it gone down?

This is because you have an interest. You’re an interested party. (By the way, “party” can also mean “person” or “group of people.”) This isn’t curiosity. It’s simply that you have something to gain or lose.

So what are the opposites?

The opposite of the elephant-on-the-balcony example is “uninterested”:

“I tried to show him the photos of our holiday in Swansea, but he seemed completely uninterested.”

The opposite of the Bob’s Buildings example is “disinterested”:

“Bureaucrats and politicians should be completely disinterested public servants. But they often aren’t.”

There we are — 12 confusing words in English that even native speakers get mixed up.

Now you can be in the fun (and smug) position of correcting a native speaker next time you hear them talk about how they’re disinterested in reggae music. (Wrong on two levels!)

Or when they say that they’d be happier if there were less people around.

14 thoughts on “Confusing Words in English: 12 Words That Even Native Speakers Get Wrong”