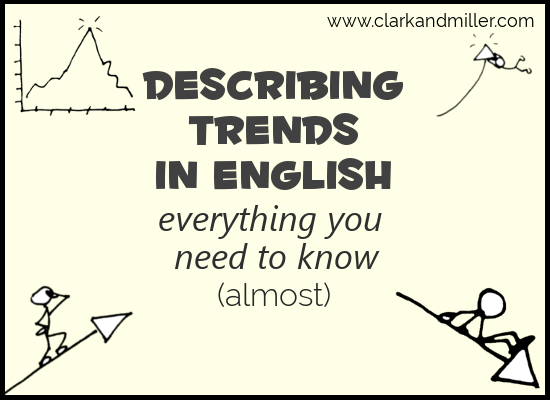 Before COVID, I never thought I’d spend so much of my week looking at graphs.

But now, we’re all obsessed with them.

Watching the numbers go up and down, watching them reach new highs and new lows.

Describing trends (how numbers on a chart or a graph change over time) is something we’re doing more than we used to.

We see trends in our lives every day. Maybe you’re talking about how much giraffe medicine your company’s sold this month, the value of carrot cake on the stock market or how often you see your neighbour walking around the garden without clothes on. (Seriously, I wish he’d stop doing that.)

So let’s learn how to talk about trends in English.

In order to do this, we’re going to start by looking at the word “increase,” which means “go up.”

By the way, the opposite of “increase” is “decrease.” 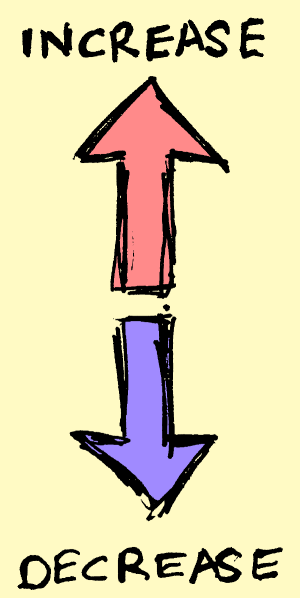 “Increase,” is both a verb (to increase) and a noun (an increase).

Using “increase” as a verb

We can use “increase” as a verb:

Let’s look at this in more detail. Take a look at this chart, which shows how often my cat sat on the work I was about to do last week: 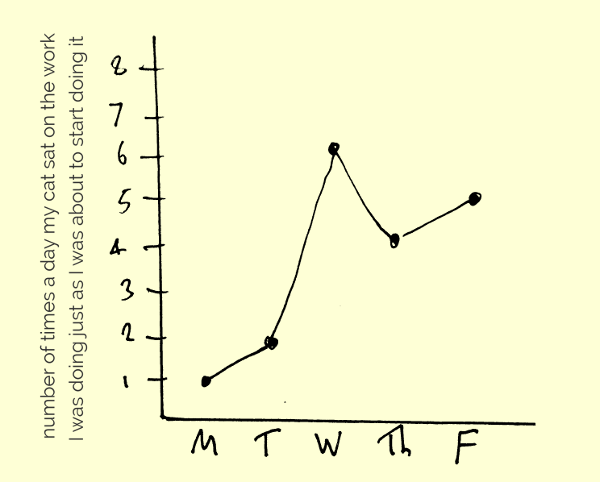 As you can see, my cat gets more annoying on Wednesdays.

So how can we describe the difference between Tuesday and Wednesday?

“The number of cat-sitting-on-work events increased on Wednesday.”

If you want, you can also describe how much it increased with these prepositions:

“The number of cat-sitting-on-work events increased from two to six.”

“The number of cat-sitting-on-work events increased by four.”

Using “increase” as a noun

We can also use “increase” as a noun:

Let’s look at this in more detail. Take a look at this graph, which shows how often I walk into a room and then forget why I walked into the room: 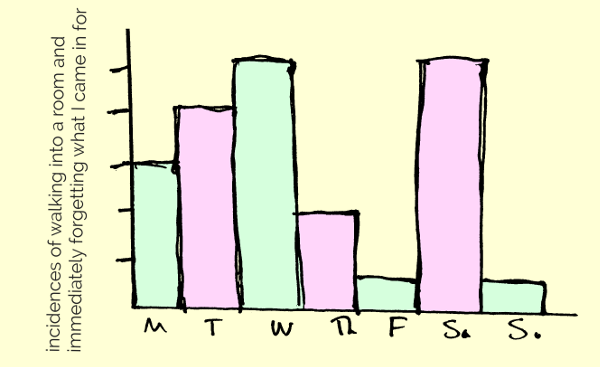 As you can see, I spend a lot of my life walking into rooms and forgetting what I came in for.

In fact, it happens so much that I have a special term for it: “room fails.”

As I mentioned above, “increase” is both a verb and a noun.

When we use it as a noun, it’s usually the object of a sentence, and we usually form the sentence with:

“We saw an increase in” + category + time frame

“There was an increase in” + category + time frame

So we can say:

“We saw an increase in room fails between Thursday and Saturday.”

“There was an increase in room fails between Thursday and Saturday.”

We can use adjectives and adverbs to give more detail about trends. 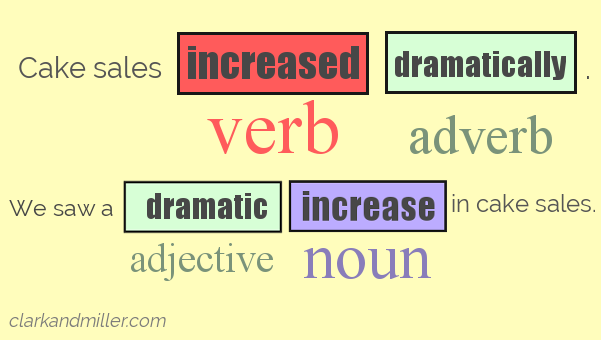 Let’s look at this in more detail.

Did you notice the big increase in room fails between Friday and Saturday? 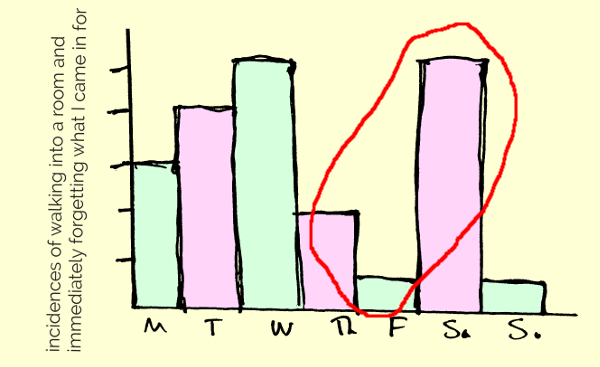 When we’re describing trends in English, we might want to point out when a change is big or small or good or bad.

That’s when we modify them!

We do this with adjectives and adverbs.

For this example, let’s use the words “dramatic” and “dramatically.”

When you use “increase” as a verb, then use the adverb, “dramatically.”

“The number of times my cat sat on my work increased dramatically between Tuesday and Wednesday.”

When you use “increase” as a noun, then use the adjective, “dramatic.”

“There was a dramatic increase in room fails between Friday and Saturday.”

Adjectives and adverbs to describe trends in English

Let’s take a look at some more adjectives and adverbs we can use to describe and modify trends in English:

Adjectives and adverbs that mean “big” or “fast”

Adjectives and adverbs that mean “small” or “slow”

OK! So far, we’ve looked at how to use “increase” as a verb and as a noun and how to use adjectives and adverbs to modify it.

Now let’s look at different verbs and nouns we can use instead of “increase” to describe trends in English.

Other words for “increase”

There are lots of wonderful and dynamic words out there we can use instead of “increase.” 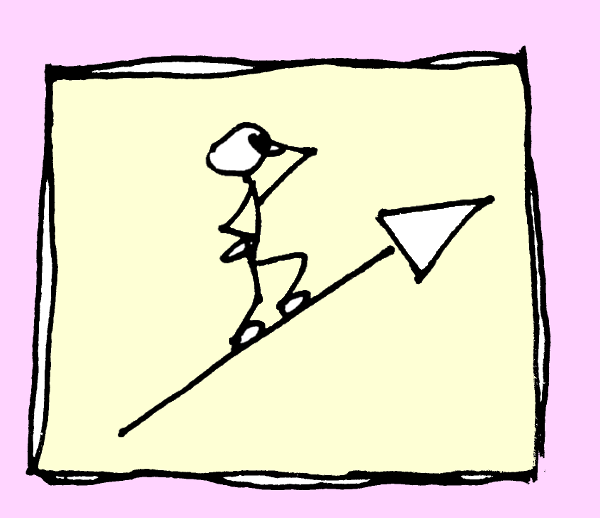 To go up
This just means “increase.” It’s a little less technical and less formal.

To climb / a climb

“There was a steady climb in tea consumption this year.”

“Rent prices climbed steadily in the neighbourhood as trendy cafés and yoga studios opened up.”

“The statistics show a slight gain in visitor numbers.”

To peak / a peak
“Peak” is a little different from “increase,” but I didn’t know where to put it, so it’s here!

Well, if you’ve read my post on geographical features in English, you’ll know that a peak is the top of a mountain.

That part where it’s at its highest? The one that looks like the top of a mountain?

To recover / a recovery
This means to increase after a period of decreasing.

So you can say, “Sales have started to recover recently,” but not “The number of children failing exams has recovered.”

“The economy is expected to recover later this year.”

“We saw a promising recovery in the economy this year.”

To improve / improvement
Again, this is used to describe positive things.

So, if our numbers represent something positive, then the numbers are increasing (which is why it’s in this category).

But it could be used to describe numbers decreasing, too — if those numbers represent something bad.

“There’s been an improvement in the number of children failing exams in the country.”

“Teacher performance has been steadily improving.” 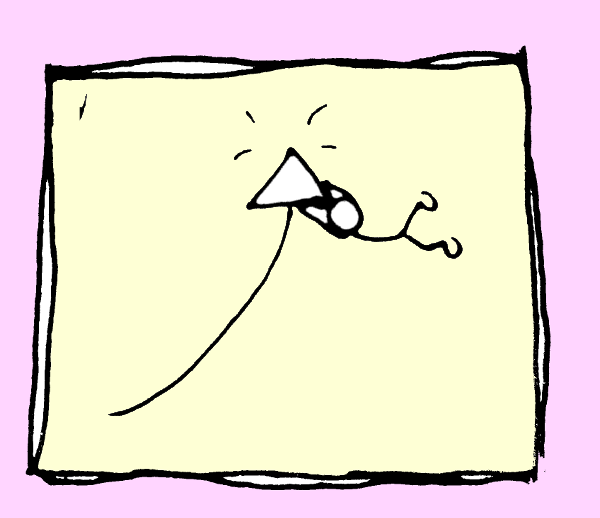 “The number of children named “Barry” has shot up since the release of the film Barry at Home.”

To rocket / to skyrocket
One thing that everyone can agree on about rockets is that they go up very fast.

So you can also use this verb when you’re talking about sales or COVID numbers or room fails.

We can also use the verb “skyrocket.”

“Pajama sales have skyrocketed as more and more people work from home.”

But jumping is still pretty fun.

And it also means “increase quickly.”

“Crapple share prices have jumped since the release of the iTeleporter.”

“There has been a jump in Crapple share prices since the release of the iTeleporter.”

To double / a doubling
When something doubles, it increases by 100%.

So when your meeting time goes from one hour to two hours (because Barry wouldn’t stop talking), then it doubles.

“There was a doubling in the number of films about tigers released this year.”

To triple / a tripling
When something grows by three times, then it triples.

Like when your Bitcoin portfolio went from 50 euro to 150 euro because Elon Musk tweeted something.

“Drivers are angry about the tripling in car park prices this month.”

To quadruple / a quadrupling
And what about when something goes up four times?

And the answer to that question?

“Complaints about customer service have quadrupled since we brought the monkeys in.”

Other words for “decrease”

Also, interestingly, there are far fewer words for “decrease” than there are for “increase.”

Is that because we’re generally more optimistic? Perhaps it’s because we like to think about growth more?

Either way, the list of words for “decrease” is a little shorter. 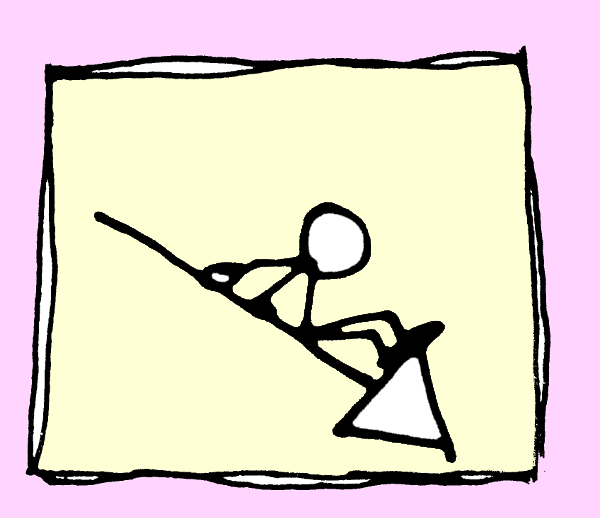 To go down
Yep.

It means exactly what you think it means.

“Avocado prices went down again this month, to the delight of vegans everywhere.”

To fall / a fall
This makes sense, right?

“Use of the anti-gravity app fell sharply in 2020 as consumers began to realise that it didn’t work.”

“There was a fall in visitor numbers again this month.”

To decline / a decline

“Traffic problems declined in the city with the introduction of the Metrobus system.”

“Statistics show a steady decline in the IQ of politicians.”

To bottom out
This doesn’t mean “decrease,” but it happens after something decreases.

Remember the verb “peak” above (and the image that came with it)?

Now, if you turn that image upside-down, you’ve got “bottom out.” 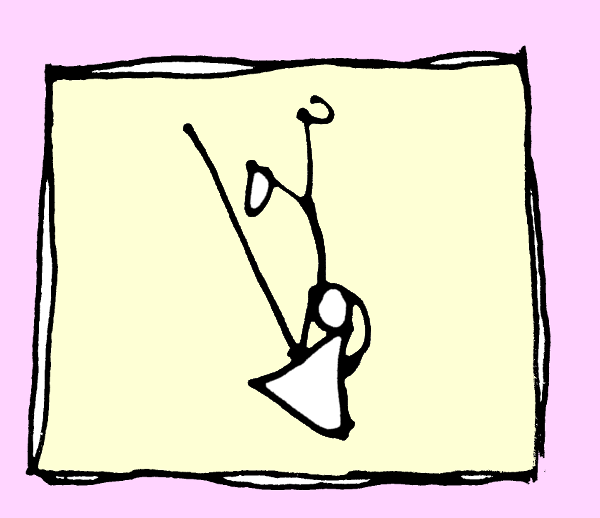 To drop / a drop
If you drop a coin from the top of the Eiffel Tower, not only will it hurt someone, but it also means you’re a psychopath.

But either way, it goes down.

“The judging panel noticed a drop in the quality of pop groups at this year’s competition.”

“They also commented that participation had dropped again this year.”

To plummet
“Plummet” is even stronger than “drop.”

“Exam results have plummeted this year, with students missing an unprecedented number of classes.”

To halve / a halving
When something goes down by 50%, then it halves.

“Pet rabbits were disappointed about the halving in carrot cake sales.”

Words for trends: moving around

A lot of the time, numbers don’t just go up or go down.

They move around quite a lot.

Or they don’t move around at all.

Fortunately, we have words for these two situations:

To fluctuate / a fluctuation 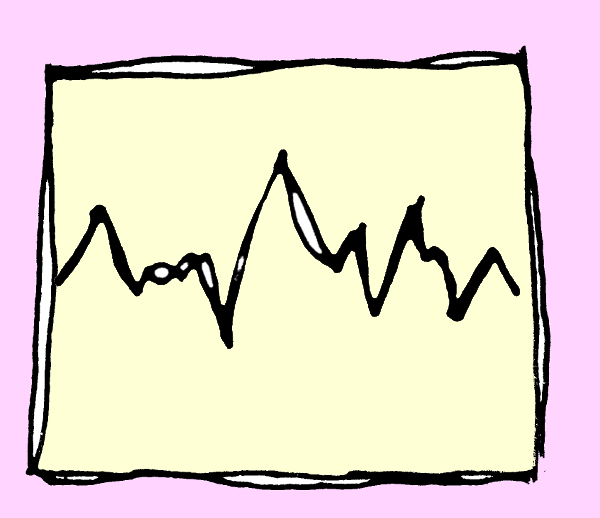 When your chart begins to look more like a child’s drawing and less like a serious business tool, then you’re probably looking at a lot of fluctuation.

“Home prices in the area have fluctuated because of the unstable economy.”

To level off / a levelling off 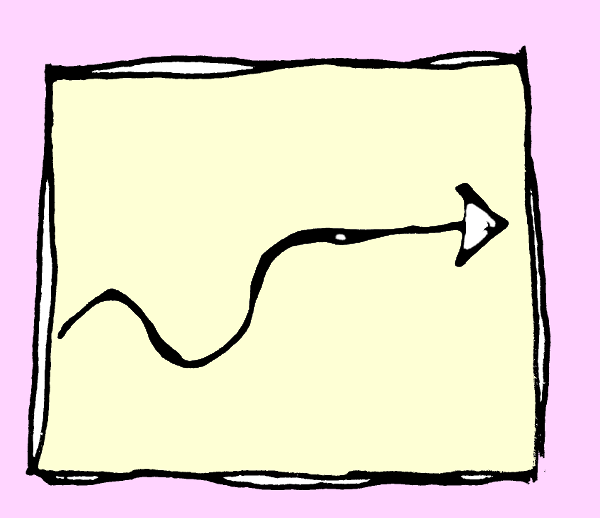 After all this mad fluctuation, sometimes the chart starts to calm down a bit and goes flat.

No increasing or decreasing. Just flat.

When this happens, it levels off.

“After a five-year steady increase, consumers breathed a sigh of relief as avocado prices levelled off this year.”

To stabilise / a stabilisation
Maybe you don’t like the phrase “level off”?

No problem, you have another word you can use instead.

And that word is “stabilise.”

So when things stop fluctuating and become more, er … stable, then they stabilise.

“We saw an encouraging stabilisation in the economy after the rapid decline of the previous year.”

So we’ve looked at how to use verbs, nouns, adjectives and adverbs to describe trends in English.

Here’s an overview of everything:

But don’t leave yet!

I have a question for you.

Here’s a chart showing how often Homer says “D’oh!” in each series of the Simpsons (well — up to series 14).

Can you describe the trends in this graph?

2 thoughts on “Describing Trends in English”