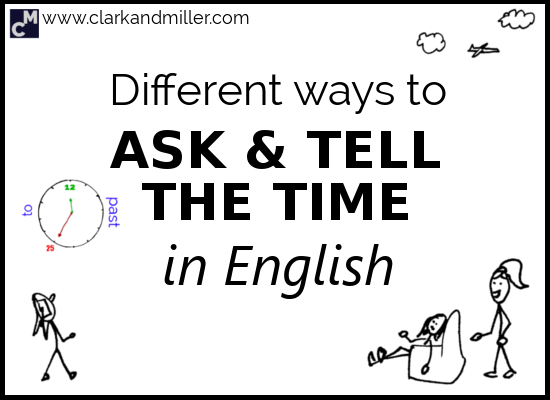 You’re about to learn different ways to tell the time and how to ask for the time in English. You might also like Numbers in English: The Ultimate Guide.

You think you can tell the time in English.

And you can, right?

I mean, you learned all this stuff way back in Elementary.

But then you ask someone what the time is in English.

And you have no idea what he said.

That’s because there are loads of different ways to tell the time (and ask for the time) in English.

Not just the ones we learned back in Elementary.

So let’s check them out.

How to tell the time in English

OK. Let’s start with the basics.

The two things on the clock (red and green in the image above) are called the hands.

Anyway. Here’s how English speakers look at the minutes:

And here’s how English speakers look at the hours:

And here’s how we look at the clock when we just want to tell the time: 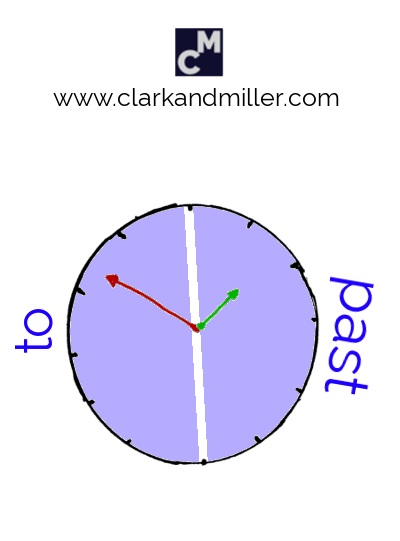 And when you know the formula is simply red-blue-green, then it’s easy! 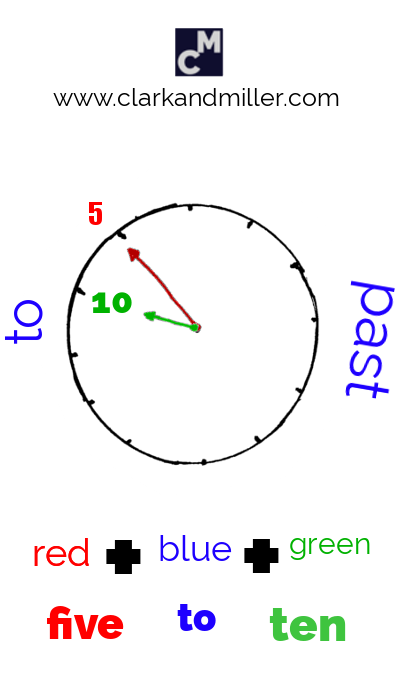 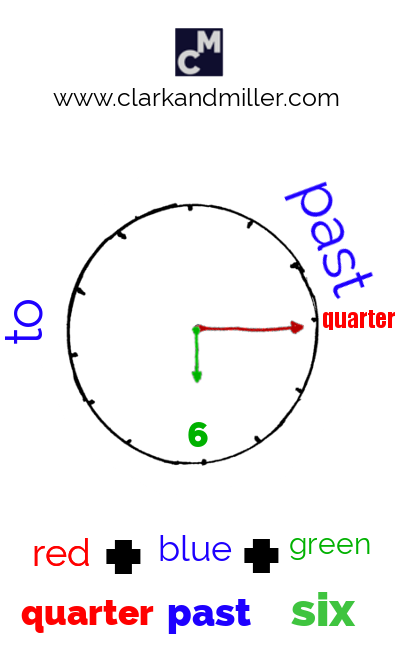 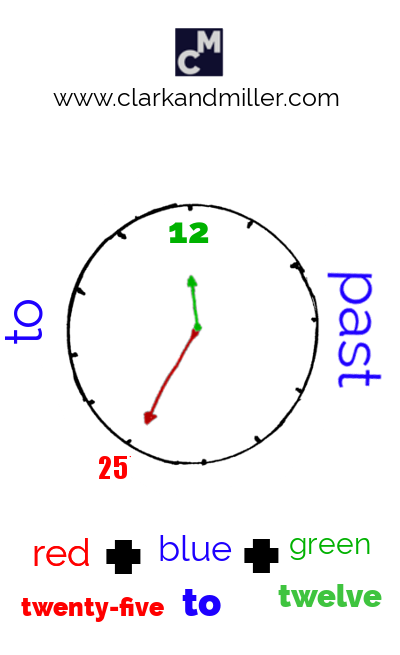 In that case, you just say what you see: 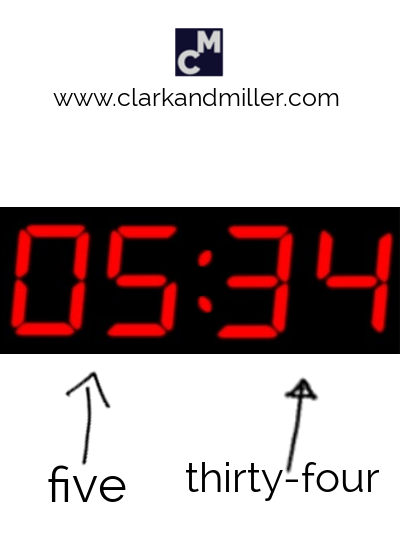 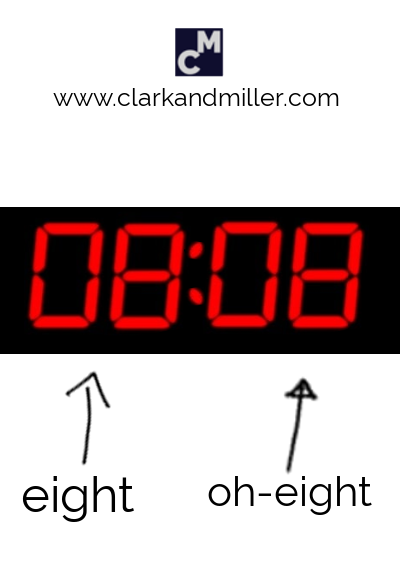 Easy, right? But this isn’t how everyone tells the time.

Depending on where you go in the world, you might hear people telling the time in different ways.

So let’s take a look at some alternatives.

How to say the time less precisely

But it’s a bit weird to be that exact when we’re telling someone the time. I mean, do they really need to know the time to the minute?

So we approximate — we give them a more general idea of what time it is, usually relating to one of the red parts on the clock: 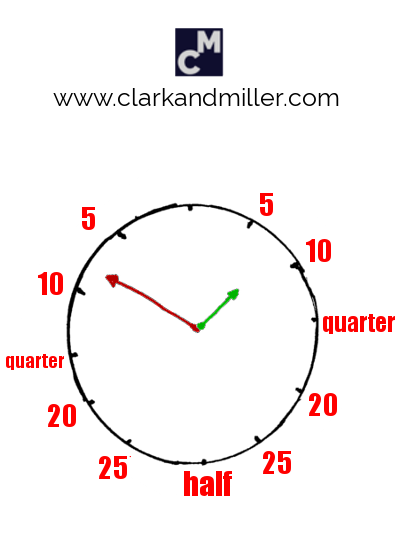 Sound natural by dropping the hour

Most of the time, we have a good idea about what kind of time it is.

I mean, we know it’s probably some time between 2 and 3.

So when we ask the time, we’re just asking for something a little more exact.

That means that sometimes, when we tell someone the time, we don’t bother saying the hour. 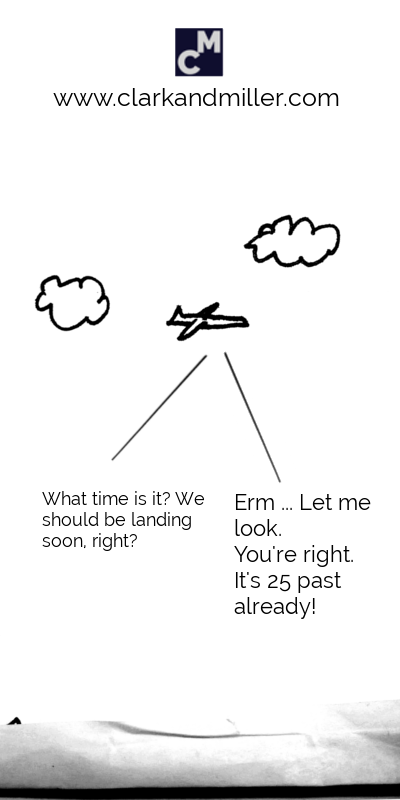 If it’s something “o’clock,” we can just drop the “o’clock” part:

So “three o’clock” can become just “three.” (Yeah, I know — just answering “three” can sound a bit weird. But some people definitely do it. So watch out!)

This one confuses the Germans, the Australians, the Americans and everyone except the Brits, who use it all the time. So if you’re going to be spending time with anyone from the UK, this is worth knowing.

Basically, when we’re saying “half past” something, we simply drop the “past.”

So “half past one” becomes “half one.”

“Half past eleven” becomes “half eleven.”

You get the idea, right?

This is especially confusing for German speakers because they use the same formula, but it means something different. (“Half one” actually means “half past twelve,” and “half eleven” means “half ten.” Confusing!)

This is a really useful suffix.

When we add “-ish” to an adjective, it means “more or less” or “not exactly, but close enough.” 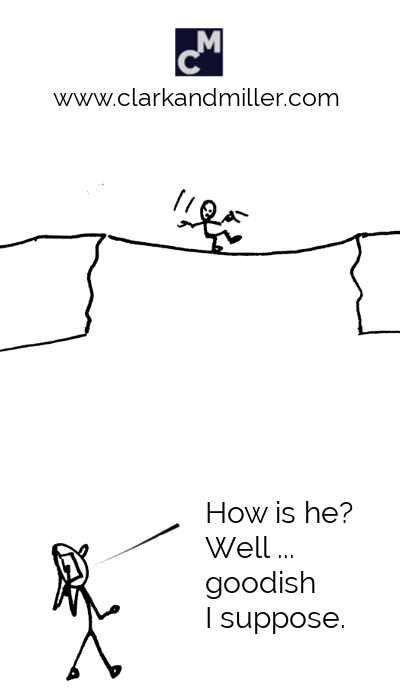 In very informal situations, we can even use the suffix as a word and just say “ish” as an answer: 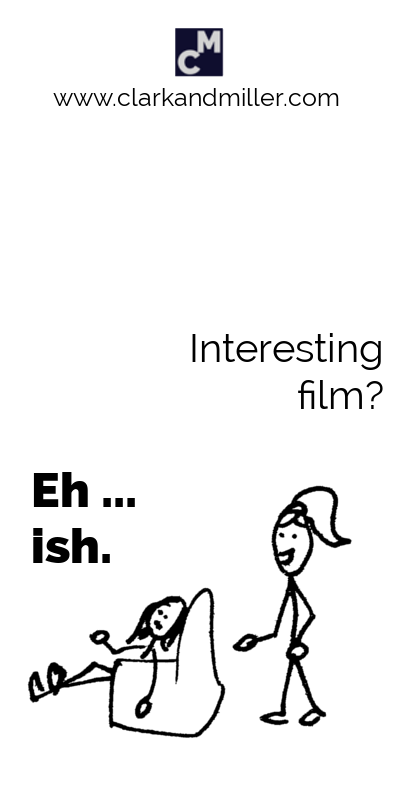 But we also use this a lot when we want to talk about the time.

Usually, it’s for one of the “o’clocks”:

Sometimes we can use it for the other parts of the hour:

“OK. Let’s meet here at half past three-ish.”

“I think he left here at quarter to-ish.”

There’s also one of my favourite jokes.

“What time does Sean Connery arrive at Wimbledon?”
“Tennish.”

(Did you get it? Let me know why it’s funny in the comments.)

How to say 24-hour time in English

OK. There’s something that some people like to do.

It’s how people in the army talk, but sometimes you get people who kind of love army stuff talking like this.

So it’s worth knowing. Just in case you run into one of those people.

How to say it?

You add “hundred hours” when the time is an “o’clock” time.

For all other times, just say it digitally.

And “quarter to four” becomes “three forty-five” or “fifteen forty-five.”

If you want to talk like this, then of course, that’s fine.

Of course, this twenty-four-hour thing is really useful when we’re not sure whether we’re talking about the morning, afternoon or evening.

But there’s another solution to that.

So we say “midnight.”

We can mix these with the minutes, too:

How to ask for the time in English

OK. So you probably usually ask the time with either (or both) of these classic phrases:

Which is fine. This is how a lot of people ask the time.

But don’t be surprised if you hear something like this when someone asks for the time:

Or, if you’re with a group of people, you might ask:

“What time have we got?”

Great work! You made it this far.

Now you know how to ask and tell the time in English in interesting and fabulous ways.