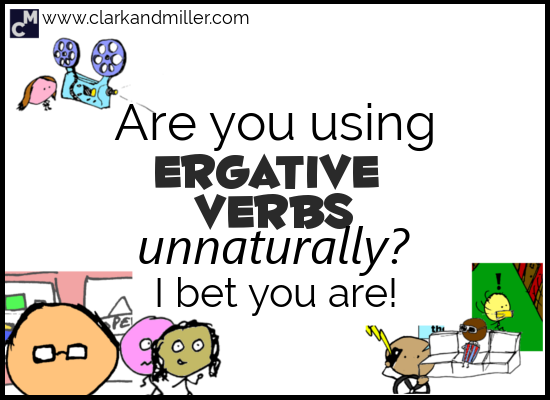 We’re about to take a look at ergative verbs in English. You might also like How to Use “Get” in English.

Let’s look at these weird sentences:

“Some people in a factory made my phone in China.”

“Some guy who might or might not have been Lee Harvey Oswald or the CIA shot Kennedy in 1963.”

Well, we don’t need the “people in a factory” part.

And we don’t need the “some guy who might or might not have been Lee Harvey Oswald or the CIA” part either.

(Unless we believe it was Oswald. Then we just say “Oswald shot Kennedy.” But let’s not go there.)

In other words, we don’t need the subject in these two example sentences. It’s unnecessary.

When we use unnecessary subjects, we have what I like to call “the awkward active.” These sentences sound unnatural … and awkward.

So the usual solution?

Passive! We make these sentences passive!

“My phone was made in China.”

These sound much more natural, don’t they?

By making these sentences passive, we can avoid the awkward active.

OK, but you know this already, right?

If the subject is unknown, unimportant or obvious — basically unnecessary — we use the passive. 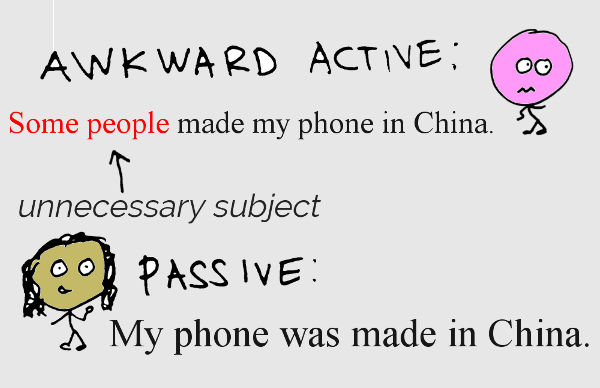 But with some verbs, like “open,” “restart” and “boil,” passive isn’t always the answer.

Instead, we put the object in the subject position.

“The projectionist starts the film at 8 p.m. on screen 3.” 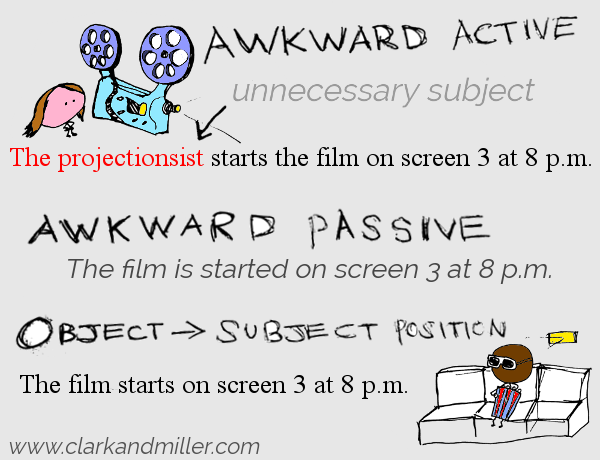 “Start” is an ergative verb.

What are ergative verbs?

“The projectionist starts the film at 8 p.m.”

We do this when …

Let’s check out some examples …

When we don’t care about the subject

Let’s take a look at an example. Here’s Danny. He owns a cake shop: 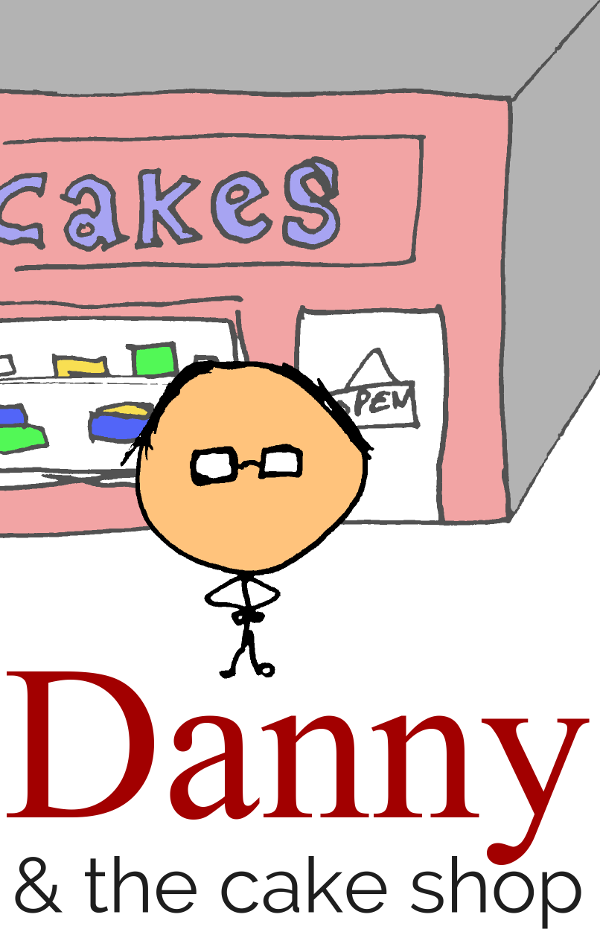 Danny lives in Buttlesworth Rye, a small town in England that may or may not actually exist. (It doesn’t; I made it up.)

The people in Buttlesworth Rye are early birds and like buying cake on their way to work. So Danny opens the shop every day at 5 a.m.

But when you’re on your way to work at six in the morning, and you’ve got a million things to think about, and you need to get a cake because it’s your boss, Barry’s, birthday … you don’t really care who opens the shop.

You just want to know whether it’s open so you can get Barry’s cake (and maybe get one step closer to that promotion).

So you call your friend Lexi. She knows everything about everything in Buttlesworth Rye.

And you ask her whether the cake shop is open or not.

What does she say?

If she says, “Some guy called Danny opens the shop at 5,” it would sound a bit strange, right?

You’re not interested in who opens it. You don’t even know Danny. Why is she mentioning Danny?

Your reaction would just be “Who’s Danny and why are you talking about him?” 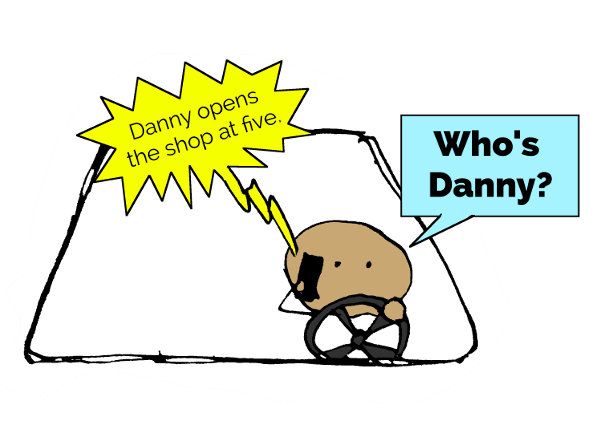 Usually, in this situation where we don’t care about the subject (Danny), we would just use the passive (like in the Kennedy example).

But that also sounds strange: 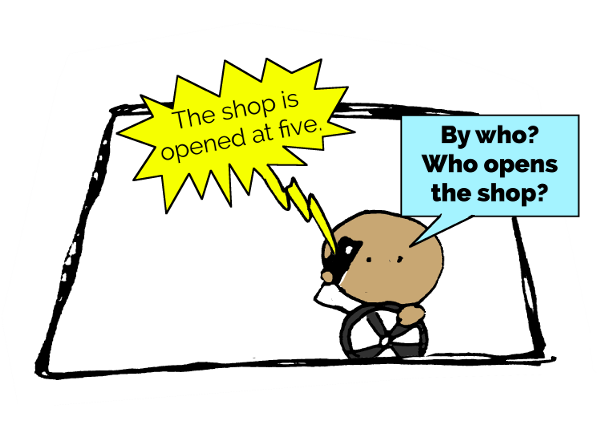 “The shop is opened at 5.” It makes you want to say, “WHO? WHO OPENED THE SHOP? ARE THEY IMPORTANT? I MUST KNOW!”

That’s because “open” is an ergative verb.

And we usually don’t use the passive with ergative verbs.

When we use the passive with an ergative verb, it draws attention to the subject — it makes us think too much about the “doer” of the verb.

In the example “Kennedy was shot,” the shooter (“Some mysterious person, maybe Oswald, maybe the CIA, I don’t know”) is just ignored — That’s because “shoot” is not an ergative verb.

However, when we have “The shop is opened at 5,” we can’t help thinking about the person opening the shop. It’s like we want to ask “By who? Who opens the shop?” — That’s because “open” is an ergative verb.

So instead, we say:

Let’s see how this works with some other ergative verbs.

“The writer began the book with a chapter about giraffes.”

But you may not want to begin your sentence with “the writer.” Perhaps you want to focus more on the book than the writer.

We know a writer wrote the story because … well … it’s a book. It has to have a writer!

OK, so how about:

“The book was begun with a chapter about giraffes.”

Well, because “begin” is an ergative verb, the passive here makes us think of the “unspoken” subject (the writer).

So we probably don’t want the passive here.

So what’s the solution?

“The story began with …”

OK. You’re getting the hang of this, right?

“Someone unimportant started the meeting early.”

“The meeting was started early.”

“The driver stopped the car suddenly.”

Sure, this is OK if we want to focus on the driver.

But we’re not interested in the driver. The behaviour of the car is more important.

You’ll find a lot of ergative verbs in cooking instructions.

Sure, sometimes the person is important, so sometimes the “awkward active” isn’t actually that awkward — especially in instructions:

“Then you need to roast the avocados for 20 minutes.”

But you can also just focus on the food. That delicious food …

“Let the tofu boil before adding the herbs.”

(But hang on — roasted avocados? Boiled tofu in herbs? What on earth am I cooking?)

When something does the action to itself

Sometimes, we don’t think about something doing something to something else.

Instead, we imagine that it kind of just … does it … itself.

This is really common for technology.

As time goes on, we get closer and closer to AI and machines running the world and making us their slaves!

So, get used to using more ergative verbs as the master machine race takes over the world!

“Sorry, my phone was turned off in the middle of our conversation.”

If you say “my phone was turned off,” that means someone turned it off.

But, as we all know, this happens to phones even when no one’s touched them.

So we can use a reflexive pronoun (itself):

“My phone turned itself off.”

Or we can just go for:

“My phone just turned off without any warning!”

Just to make things confusing, “turned off” is also an adjective meaning “off” … as in “not on.”

So we can have what looks like the passive here:

“Sorry you couldn’t call. My phone was turned off while I was on the plane.”

And if you want to mean “off,” then that’s fine!

Technology! All of these examples have the same feeling — a feeling of the technology having a mind of its own.

We totally avoid the passive and sentences with “someone” at the beginning in these situations. That’s because it’s the technology, not people, turning phones off and restarting laptops and crashing computers:

“It restarted without telling me!”

It’s not just technology that has a mind of its own.

So although we can say, “Someone closed the door,” when the door magically closes itself (or, more likely, the wind closes it), then you’d put the object in the subject position.

“As he walked down the dark corridor, wondering where everyone was, a door to his right suddenly closed with a loud bang.” 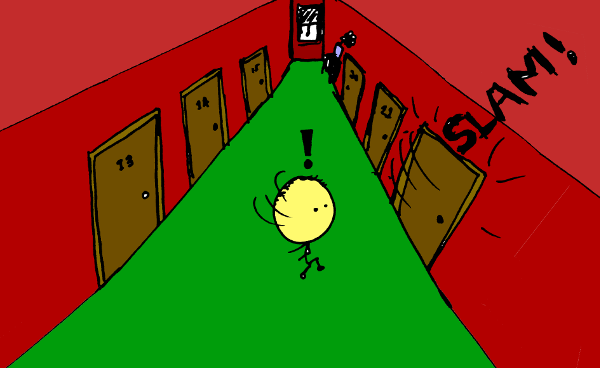 When we want to avoid responsibility

A very common reason to use the passive is to avoid responsibility.

That’s when we get the sentence that politicians love: “Mistakes were made” (instead of “We made some mistakes”).

But when we talk about things breaking in one way or another (or tearing, ripping, cracking, etc.), it’s common to put the object in the subject position.

So instead of saying “I broke it” or “Someone broke it,” you can just say “It broke.”

You dropped your phone out of the window? Then what happened?

The £50 note I lent you? It ripped in your pocket? That was unlucky.

So there we have it! Lots of ergative verbs to use when the “doer” of the verb isn’t important, when things magically do things to themselves and when you just don’t want to tell your auntie that you broke that expensive but ugly vase she gave you for your birthday.

OK! Now over to you!

Answer in the comments, and I’ll tell you my favourite fact!

10 thoughts on “Are you using ergative verbs unnaturally? I bet you are!”