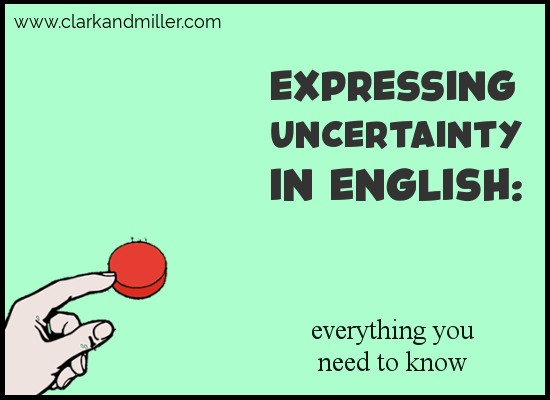 Usually, when we say something in English, we’re making either a positive sentence:

or a negative sentence:

“My cat doesn’t like it when I play guitar.”

For both these sentences, we’re 100% sure about these facts:

But what if you aren’t sure?

What if you need to express something in the middle?

That’s when you need to express uncertainty in English.

How to express uncertainty in English

There are four main ways we can express uncertainty in English:

Just by adding a short phrase like “I think” or “I reckon” to the beginning of your sentences, you can add a feeling of uncertainty.

“I think your cat smells.”

“I reckon we’re only going to be a few minutes late.”

The structure is really simple.

Use the phrase first, then add “that” (if you like), then start your sentence:

Here is a list of these kinds of phrases in order of strength:

Expressing uncertainty in English with adverbs

You can use adverbs to express different levels of uncertainty.

What the adverbs mean

As you can probably guess, when you use these phrases, you’re saying that you’re really, really, really sure something happened. You’re just not 100% sure.

When we say something probably happened, we’re saying that we’re pretty sure it happened.

This one’s a little different.

When we use “apparently,” it’s like we’re saying, “I don’t know for sure, but someone told me this.”

Pretty useful, right? With one word you can say, “If this isn’t true, it’s not my fault!”

“Possibly” is pretty uncertain. When you use this word, you’re really saying that you’re not sure at all.

How to use these adverbs in a sentence

Most of the time, put these adverbs just before the main verb.

That means that if you have an auxiliary verb (like “has”), then the adverb goes after it:

And if you don’t have an auxiliary verb (like with the present simple and past simple tenses), then you just have the adverb after the subject:

“The bank manager almost certainly ran away with all the money.”

Here they are for each tense: 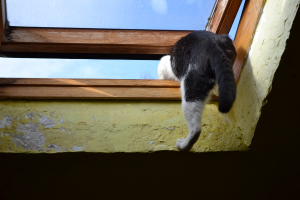 When the sentence is negative, however, we usually put the adverb BEFORE the auxiliary:

You can also put these at the end, but if you do, they often sound less certain, as if they were an afterthought:

Also look out for “apparently.” “Apparently” only feels comfortable when you put it at the end or the beginning (not in the middle).

Modal verbs are a simple, elegant and useful way of expressing uncertainty in English.

They look great, too!

You can use them to express uncertainty about the past:

“Sheila can’t have gone to the shops. Look! Her shoes are still here!” 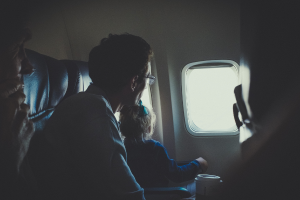 “We must be flying over Belgrade. Check out the rivers!”

And about the future:

“We might be able to finally leave after another hour of waiting.”

When you’re expressing uncertainty in English with modal verbs, you might want to ask yourself two questions:

Let’s look at the first question:

How certain am I?

As you can see, you can be very sure something DIDN’T happen (on the right of the table).

You can be very sure that something DID happen (on the left of the table).

Here’s how we express these with modals:

But first, we need to know when we’re talking about.

When am I talking about?

So we know what level of certainty the modal verbs express.

But we need to ask when we’re talking about.

Is it the past, present, future, general?

Let’s look at how to do that.

It’s also quite common to add other forms to these modals, especially “going to,” “have to” and “used to.”

“It was after eleven, so they can’t have been going to meet Andy. He starts at ten.”

“Surely they must have to stop smoking when they join the monastery, right?”

“Judging by how tired you look, I’m guessing you might not have got used to life on the farm yet.”

So, we’ve looked at the two main questions:

Now, let’s bring it together into one mega-table!

Notice that we usually use continuous forms when we’re very sure about the future.

“They can’t be starting in an hour! Nothing’s ready!”

You can also express uncertainty in English with full clauses or sentences.

These sentences are like a “disclaimer” to whatever you’re saying.

It’s like a way of softening your statement so it feels like you’re not pushing too hard.

This is especially useful in delicate situations like business negotiations, discussion about politics or talking to some difficult relatives over a big family dinner.

All these phrases have the same function, and you can use them interchangeably.

*If you say this before your statement, use “this.”
If you put it at the end, use “that.”

“Don’t quote me on this, but they’ve found a cure for sneezing.”

“They’ve found a cure for sneezing. Don’t quote me on that.”

Mixing it all up

You can, of course, use a mixture of these strategies.

If you do, you can really express uncertainty in English in a nuanced and detailed way.

“As far as I know, the cat must be sleeping right now.”

“I think we possibly might’ve given the cat too much coffee.”

“I believe the cat might start a world war. Don’t quote me on that.”

OK. Over to you. Let’s practice expressing uncertainty in English.

Can you answer the questions?