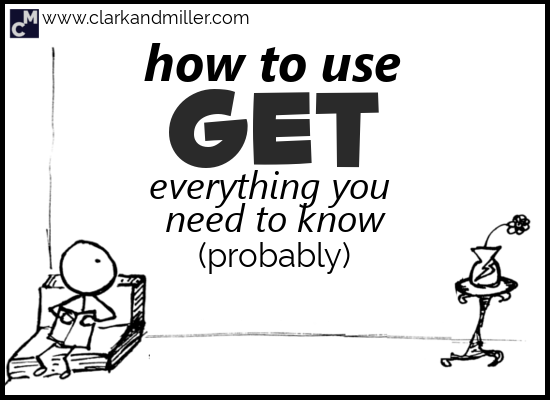 You’re about to learn 12 different ways to use “get” in English. Also check out 27 Different Ways to Say Thank You (And How to Reply).

If you went up to some random guy in the street in the UK and said, “Hey you! What does ‘get’ mean?” they would probably say something like, “Err… hello. It means ‘take,’ I guess.”

Either that or they’d probably ignore you and try to walk away.

But what the average person on the street doesn’t really realise is that “get” is used in much more interesting ways.

The general meaning of get

Before we get into the different uses of “get,” let’s take a minute to look at how “get” works in a more general way.

One second you’re walking into a church, and then the next you’re suddenly married. (That’s when we say “get married.”)

One second you’re standing on the street, and then the next you’re on a bus. (That’s when we say “get on a bus.”)

One second you’re reading some comments on Facebook, and then the next you’re angry at everything. (That’s when we say “get angry.” And also why staying away from Facebook is a good idea.)

It’s all about change. “Get” is the change from one thing to another.

I actually included this way of looking at “get” in my book 102 Little Drawings That Will Help You Remember English Rules Forever (Probably).

How to use get in English #1

There are two main ways we can use “get.”

Sometimes we follow “get” with just one thing — it might be a noun, it might be an adjective … in fact it can be any of these things: 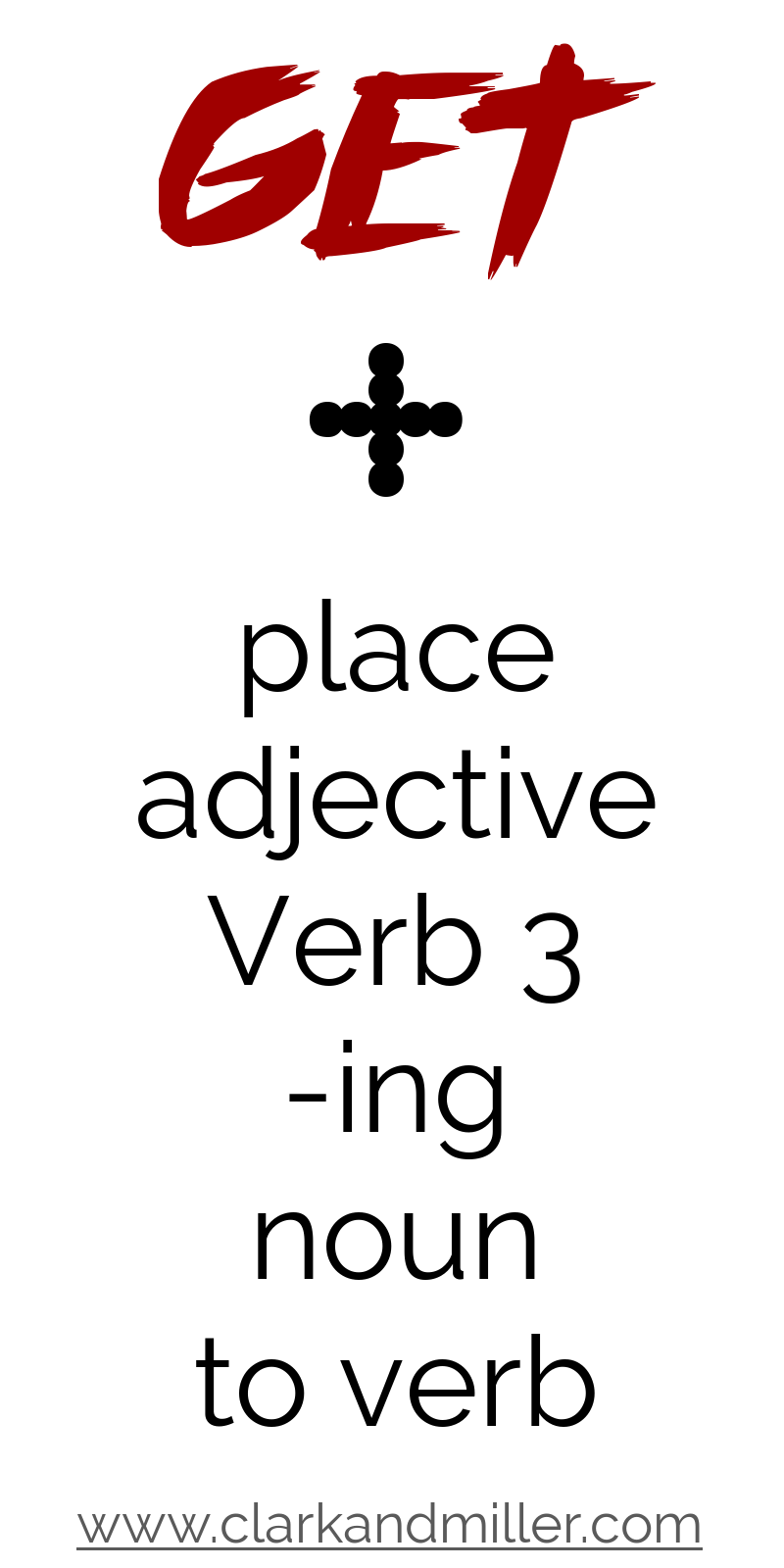 (We can also follow “get” with two things. That’s when things get interesting. We’ll check that out later.)

But first, let’s look at how “get” can work with just one thing after it. 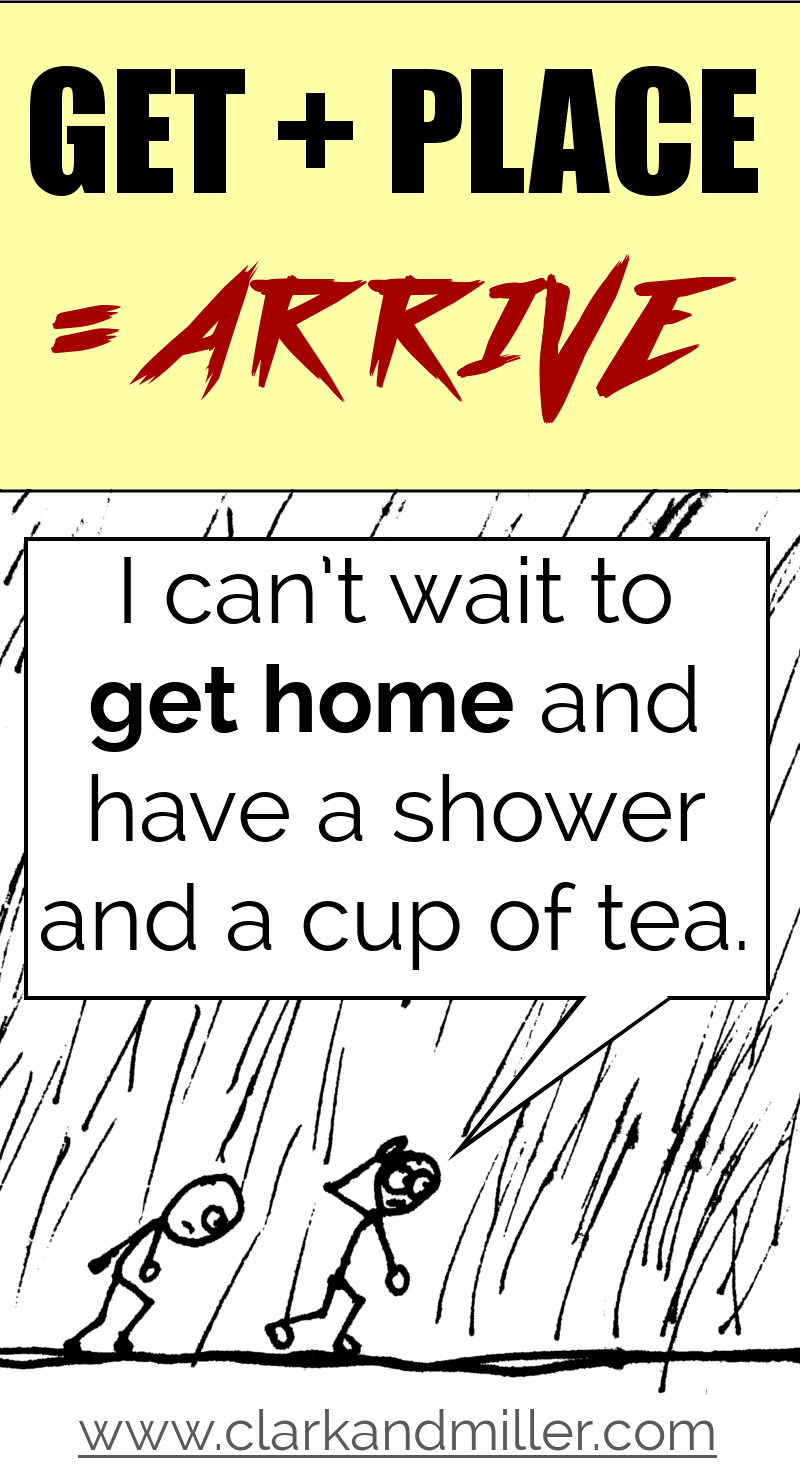 As you can see, we can use “get” with a place, giving it a similar meaning to “arrive.”

“I can’t wait to get home and have a shower and a cup of tea.”

“As soon as we got there, we had to go back again.”

“What time does she get back? I miss her already!” 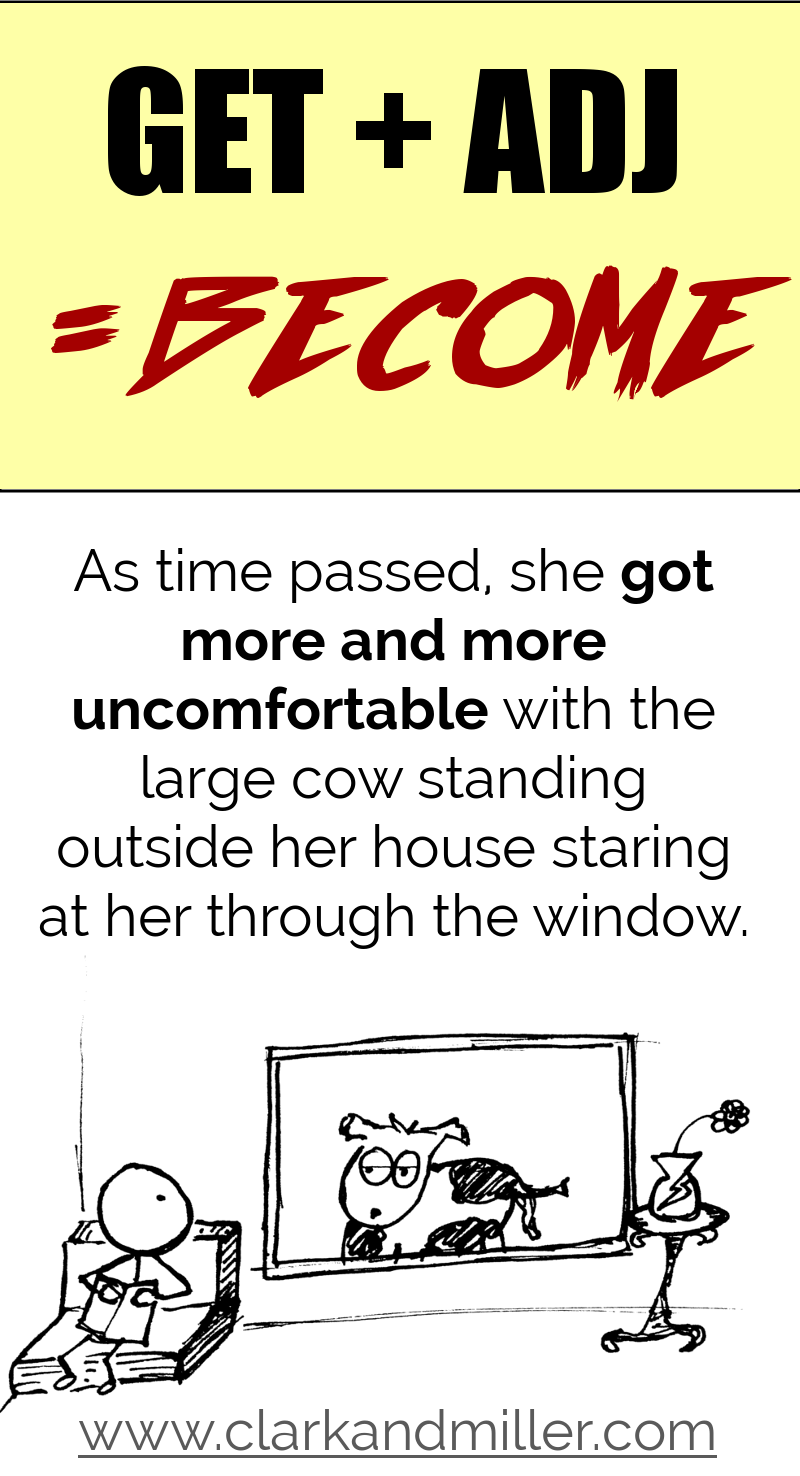 We can also use “get” with an adjective, which gives it a similar meaning to “become.”

“Don’t talk about his nose. He’ll get really angry.”

“I’m really getting excited about this trip.”

“Did you see her? She got so serious when we started talking about giraffes.”

It’s very common to hear “get” with comparative adjectives to describe how something changes over time:

“As time passed, she got more and more uncomfortable with the large cow standing outside her house staring at her through the window.” 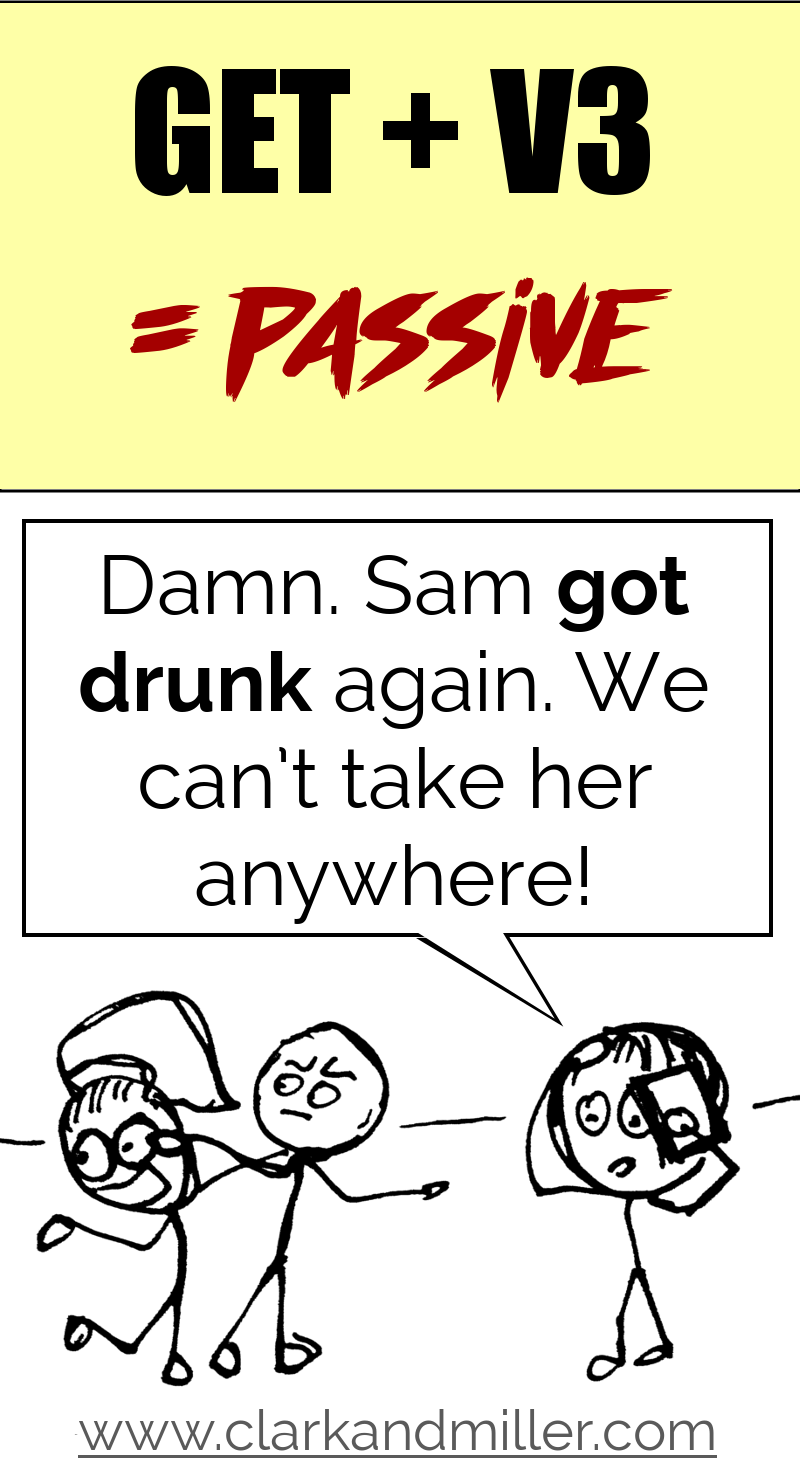 Previously, I talked about how adjectives and verb 3 (“done,” “gone,” “broken,” etc.) can behave in the same way.

So that means that if you can use an adjective with “get,” then you can also use verb 3.

If you do this, you’re forming the passive.

So instead of saying “Alina was promoted,” you can say “Alina got promoted.”

“So what’s the difference?” I hear you ask in your intelligent and inquisitive voice.

When we use “be” in the passive (“Alina was promoted”), we’re focusing more on the state — the situation.

When we use “get” in the passive (“Alina got promoted”) we’re focusing more on the action itself.

We think about the boss asking her into the office and giving her the good news … perhaps over a glass of champagne while laughing maniacally.

Because “get” in the passive focuses more on the action, that means we can’t use it with stative verbs.

“Damn. Sam got drunk again. We can’t take her anywhere!”

“Have you ever thought about getting tattooed?”

“I’ve been on the phone for almost an hour. I keep getting put on hold with that stupid music.”

We can use “get” with -ing, which gives it a similar meaning to “start.”

“We met at the café on Short Street and just got talking immediately.”

“I’ll feel better as soon as I can get working on this.”

“Come on everyone! Get moving! We’re starting the third exercise in two minutes!”

The phrase “get going” is also very common — it basically means “get started.”

“OK — is everyone here? All right then, let’s get going.” 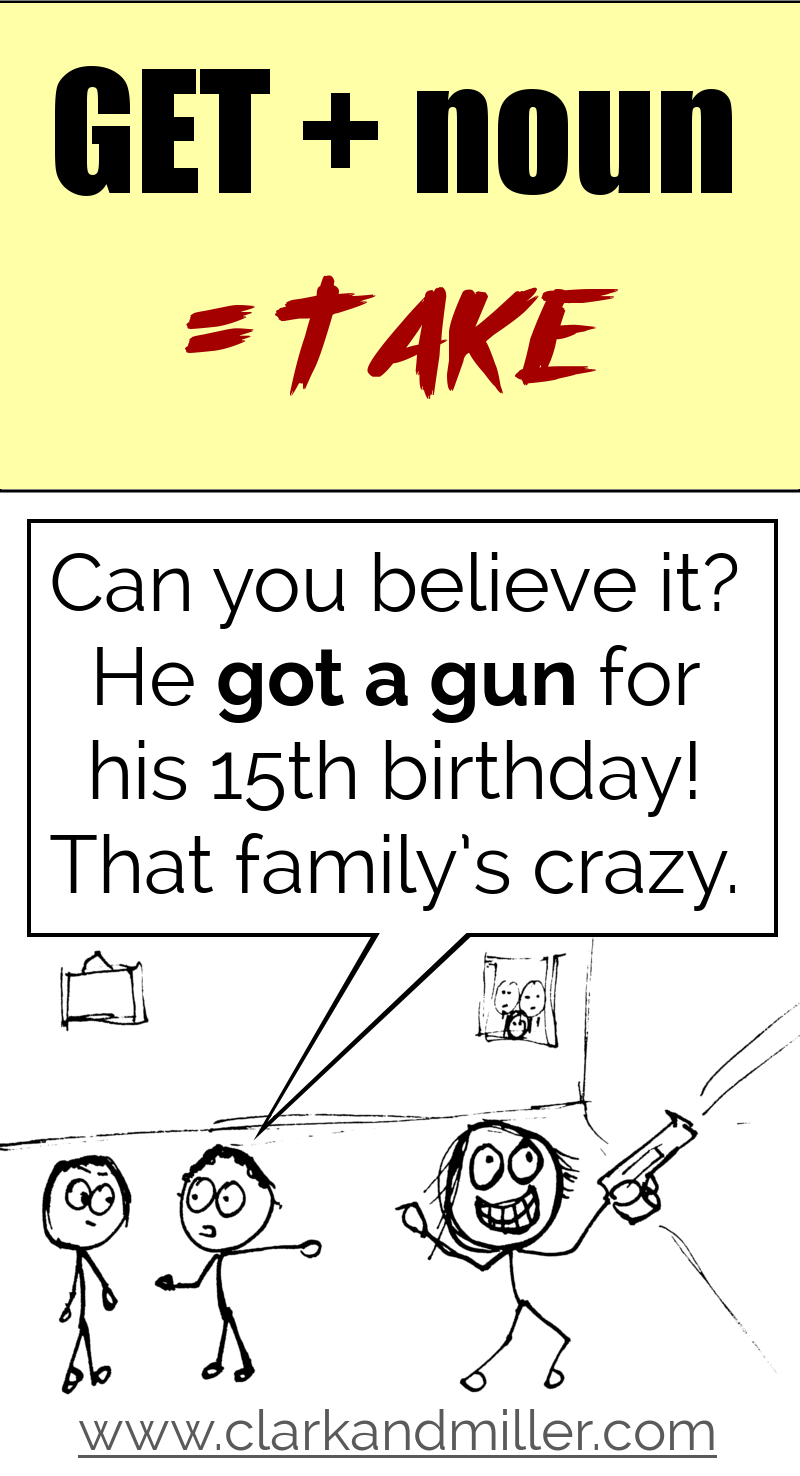 We can use “get” with a noun. This basically means “take,” although a more accurate word for this would be “obtain.”

When you get something, you make yourself have it.

So you can use it when you just go and take something:

“Right, I’m going to the kitchen to get some tea.”

You can also use it when you receive something:

“Can you believe it? He got a gun for his 15th birthday! That family’s crazy.”

You can use it for abstract things:

And we often use it to mean “buy”:

“Hey — you’re going to the shop? Can you get some green paper and glitter? Don’t ask why.”

Finally, “get” is often used when talking about good deals. You might want to use it to persuade someone:

“… and not only do you get the transport and the hotel room, but you get a free massage, you get free use of the jacuzzi, and you get a massive box of Lego — all included!”

Get + to verb = have the opportunity to 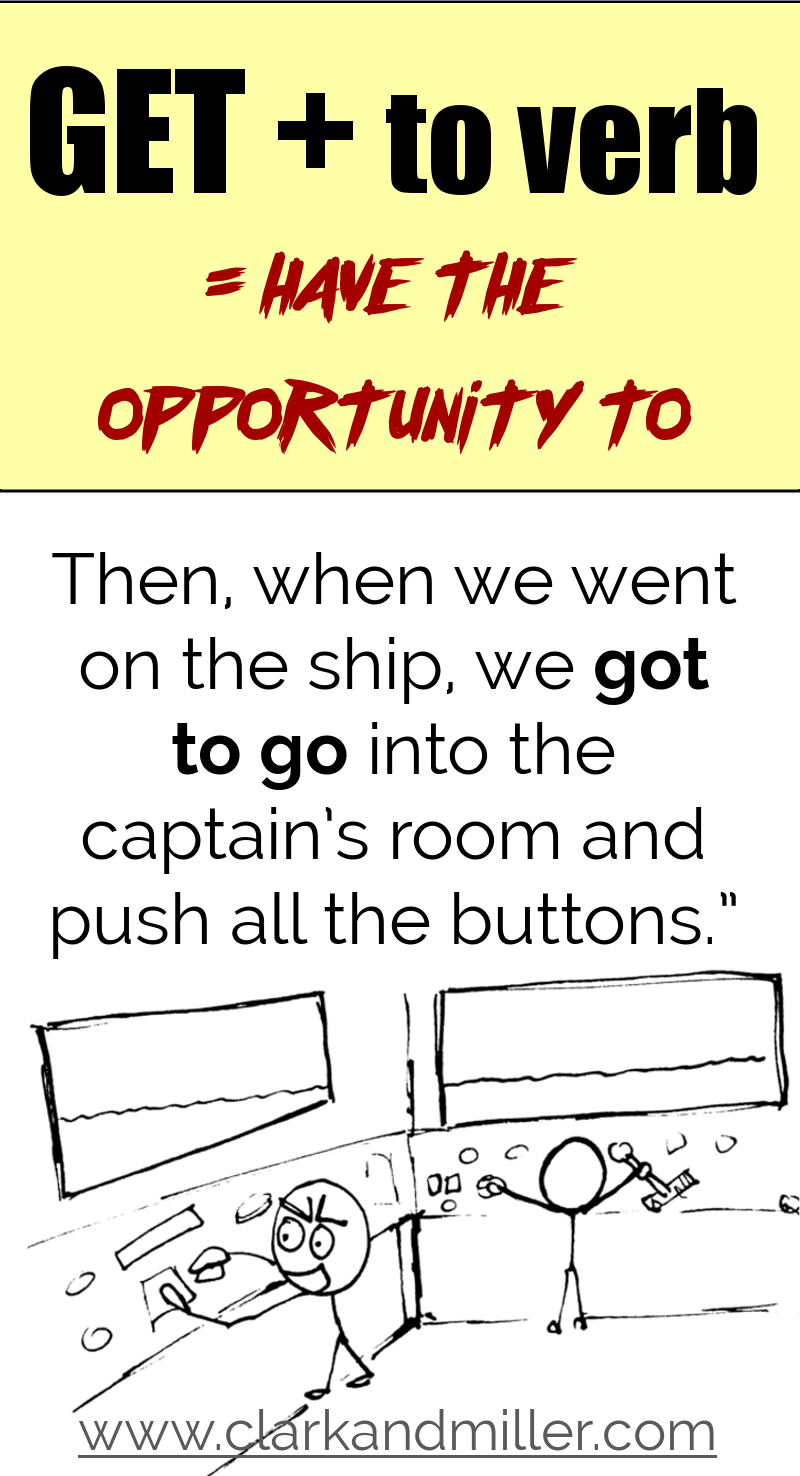 Finally, when you use “get” with “to + verb,” it means something like “have the opportunity to.”

It has a feeling of excitement and privilege:

“Then, when we went on the ship, we got to go into the captain’s room and push all the buttons.”

“Egypt was great, but we never got to see the Sphinx — there just wasn’t enough time!”

How to use get in English #2

OK. This is where things get interesting.

But you can also use ALL of these “gets” on other people.

So, for example, if you “get to the park,” you simply arrive at the park: 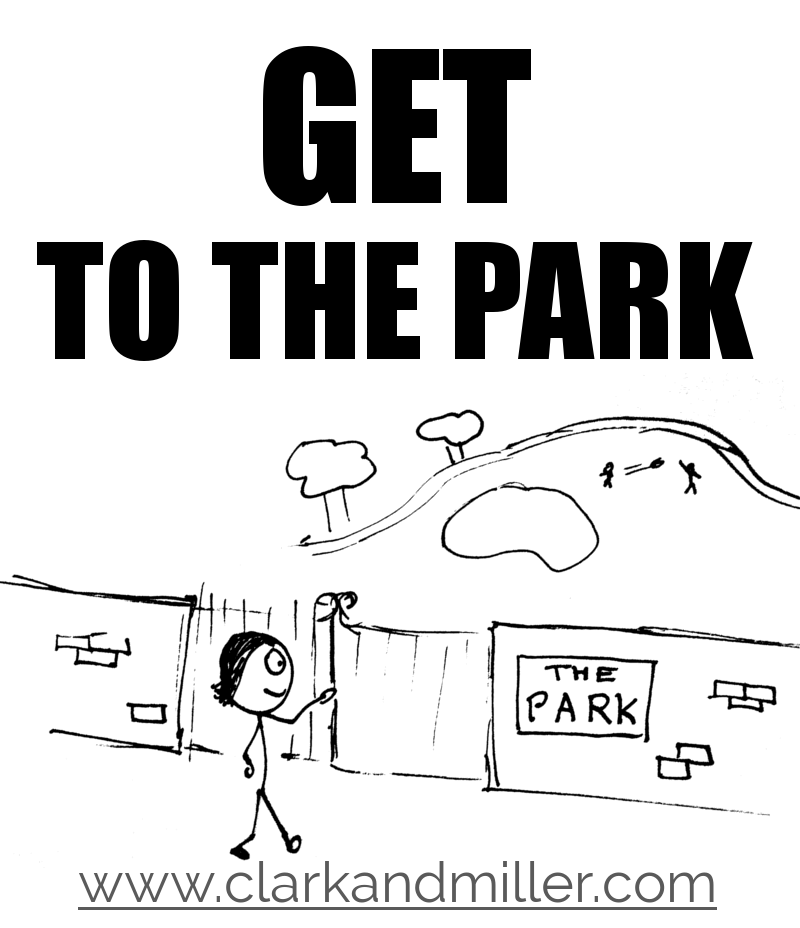 But if you decide that it’s more important that your friend Jenni is in the park — perhaps it’s her first day of work as a park warden, and she can be a bit lazy — then you would get Jenni to the park. 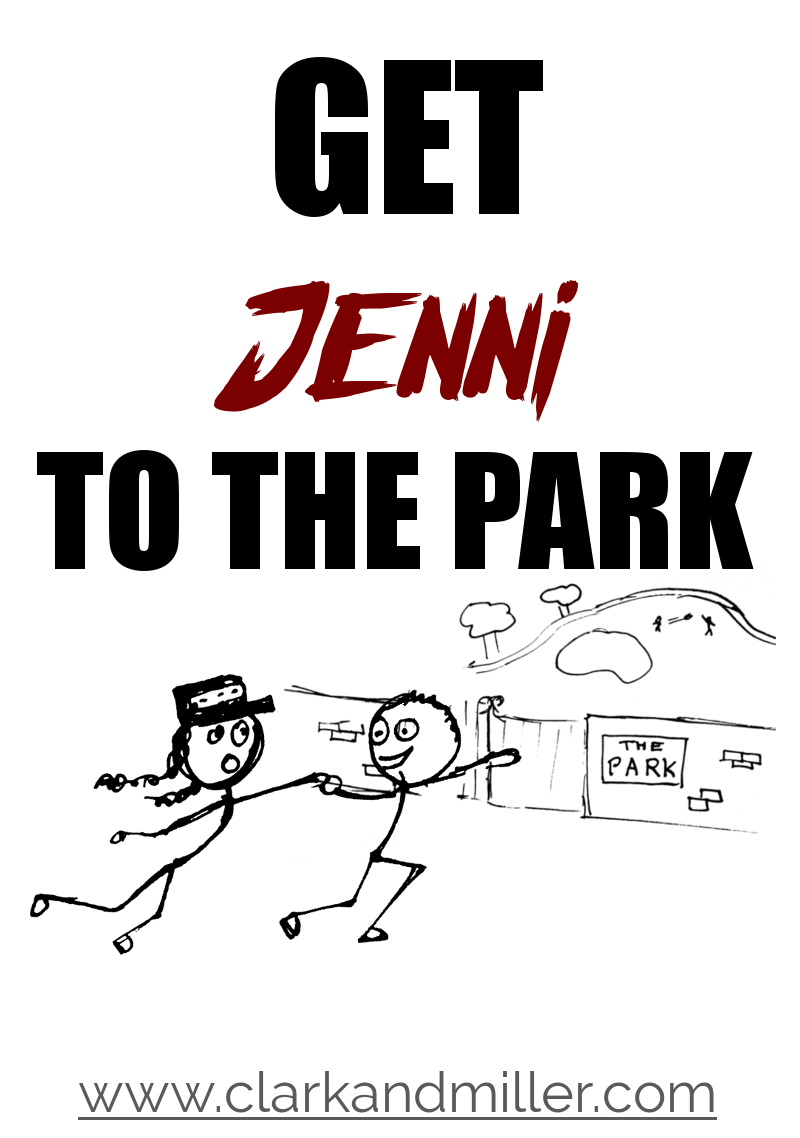 And sure — perhaps Sam got drunk yesterday: 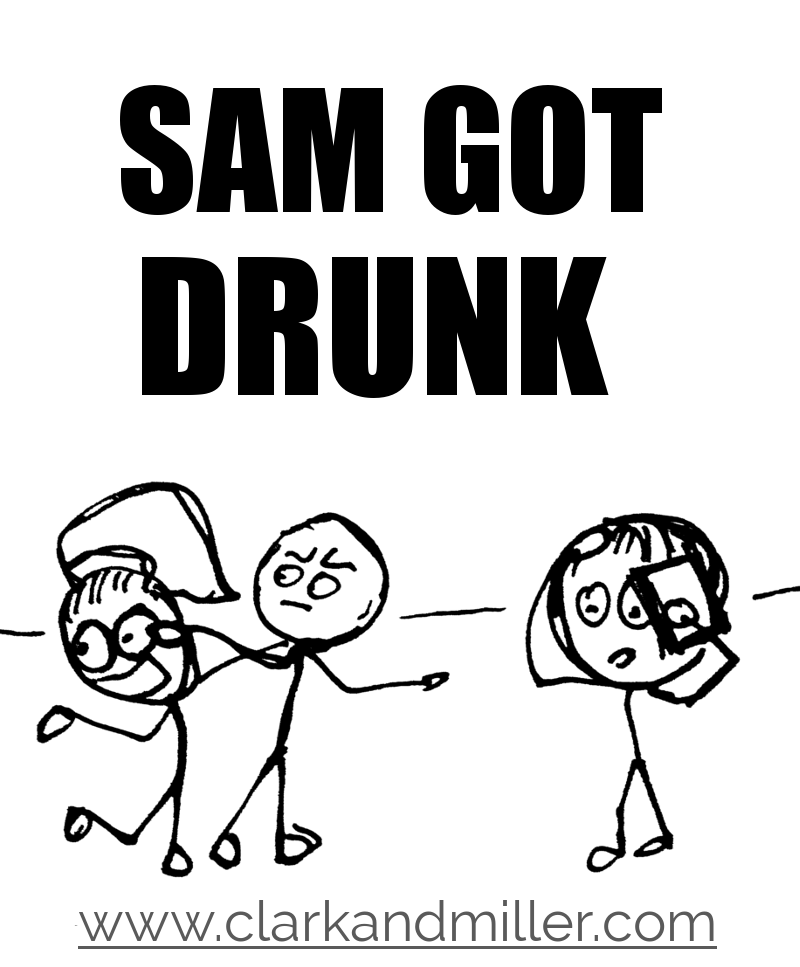 But she was constantly filling up Terry’s glass, who also got drunk — because of Sam.

Meaning that Sam got Terry drunk: 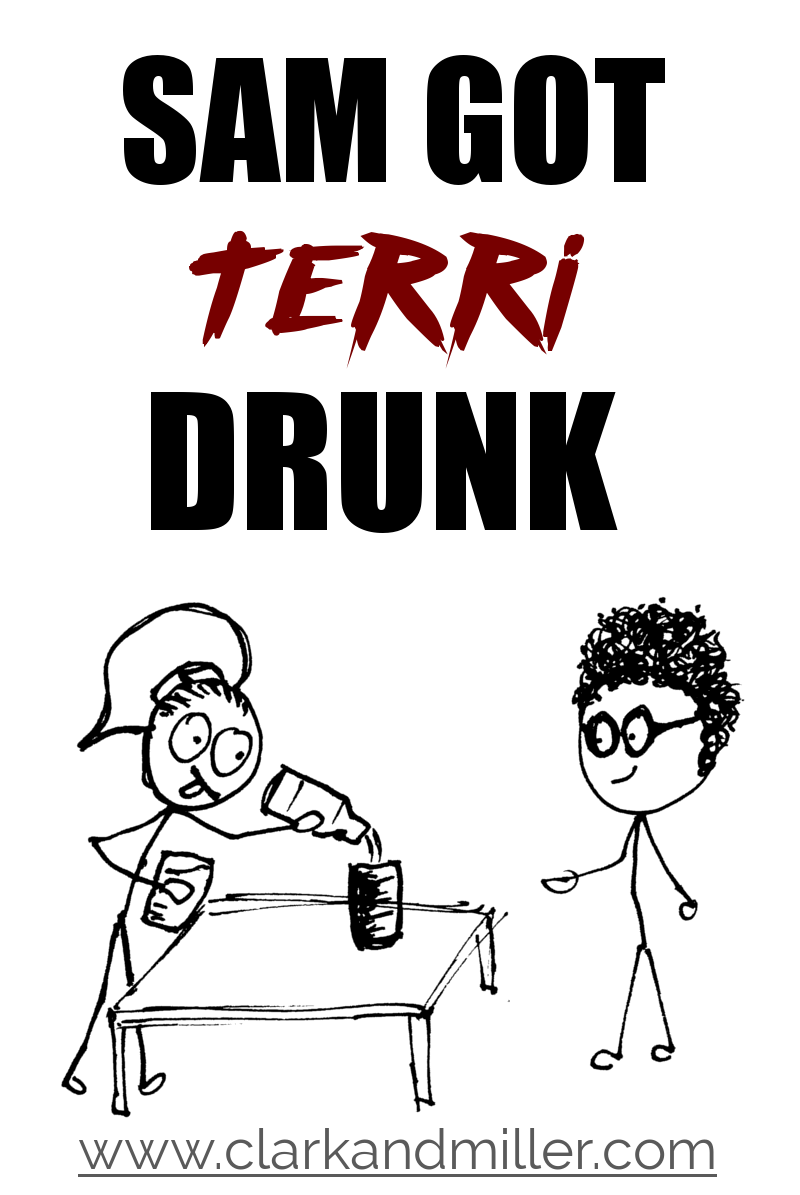 Basically, you can add another person after “get,” and you have a situation where one person makes something happen. (This feels a lot like causative sentences. For more on causative verbs, click here.)

Get + someone / something + place

“You have no idea how hard it is to get a pet cat into Australia.”

“I really want to get this lid off — but I think it’s stuck!”

This can even be abstract:

“I don’t hang out with him anymore — he’s always getting me into trouble.”

“Right — I’m getting you off this project and back to working on the accounts!”

Get + someone / something + adjective

“She got the kids all upset when she told them that the bird was dead.”

We often use this with the word “all” to emphasise the adjective:

“Look! You’ve got the floor all wet!”

Important note: This sounds a bit weird with some adjectives. We can’t say, for example, “The film got me happy.” It just sounds odd. It certainly works with adjectives that have a more passive feeling, like “pregnant” and “upset.”

This structure is especially common when we’re talking about getting some sort of service:

“I couldn’t figure out how Linux worked, so I just went to the shop and got it installed.”

“Just to annoy the guys next door, they got their house painted pink.”

But we can also use it more generally:

“It was Sally. She’s the one who got him promoted! Yeah — I was surprised, too!”

“Help! I’ve got myself locked out. Again!”

“After … like … 3 hours, she finally figured out how to get the car moving again.”

“I guarantee that I can get your customers buying twice as much as they are now using my magic marketing money formula. I call it MMMF.”

“What you said yesterday really got me thinking …”

Get + someone / something + noun

So sometimes you take something for yourself.

But, because you’re obviously such a nice person, you often take things for other people.

“Can I get you something to eat? Anything?”

“Don’t worry, I’m getting Danni a ticket as well.”

“What are you getting Dad for his birthday? I can’t think of anything!”

Get + someone / something + to verb

When I think of this form, I often think of stupid machines that won’t work properly:

But you can use it for people, too, of course:

“After that, can you get them to sing ‘Born Slippy’? I love that song!”

This also reminds me of a joke:

Question: What’s more difficult than getting a poet to read his poetry?
Answer: Getting him to stop reading his poetry!

OK. So you made it to the end! You are a true Clark and Miller monster!

So, now I’m going to ask you some questions:

I’m looking forward to hearing your answers in the comments!

14 thoughts on “How to Use Get in English”