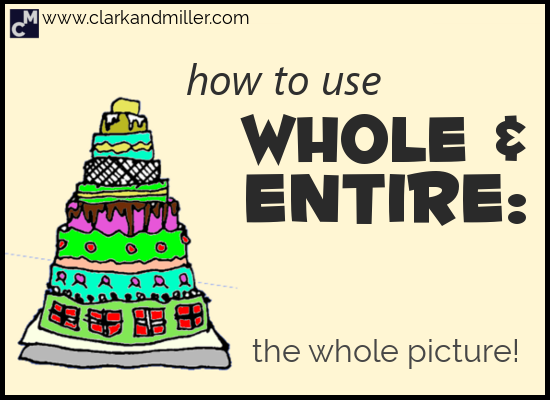 Although “whole” and “entire” are very common words, you’d be surprised by how many people still find them difficult to use.

In fact, I recently got a message from a Clark and Miller reader called Oscar. Here’s what he said:

“I’d like to have some tips to explain the difference between whole, entire and all … although I know how to use it, I want to know a better way to explain it.”

Great question. At first glance, “whole” and “entire” (and “all”) can be kind of confusing.

But there’s actually quite an easy way to look at it.

Today we’re going to deal with the differences (and similarities) between “whole” and “entire.”

“Whole” and “entire” as adjectives 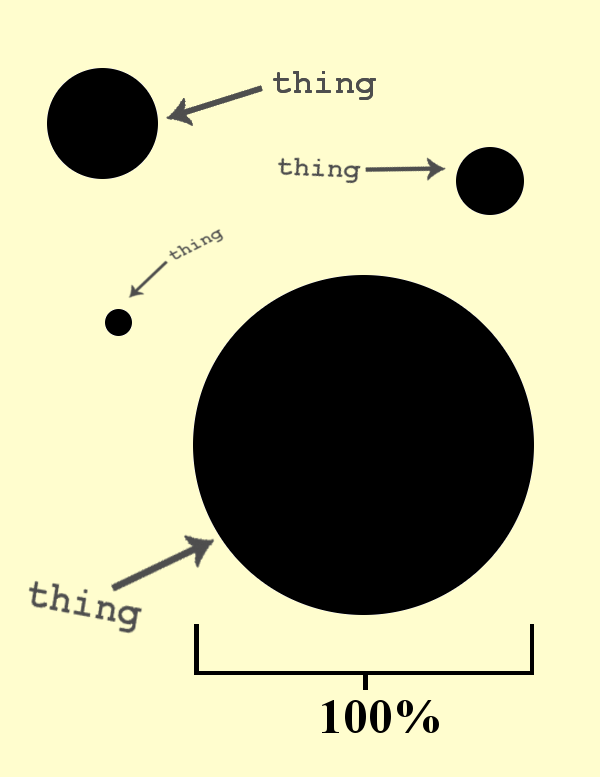 “Whole” and “entire” can be adjectives — we use them in the same way. Let’s take the adjective “boring” as an example and see how it behaves.

In the sentence “We watched a boring film,” you’ve got the structure “a + adjective + noun.”

This also works with “the”: “the boring film.”

The words “whole” and “entire” work the same way — just put them before the noun. 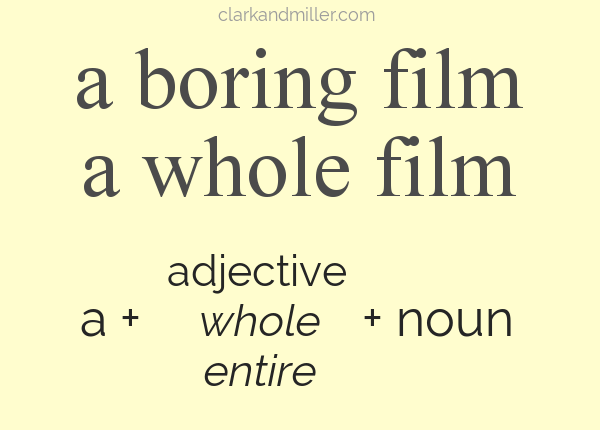 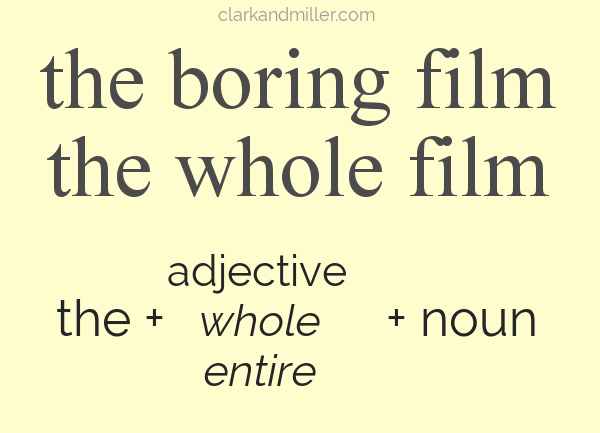 But be careful. There’s a rule!

We never use “the whole” or “the entire” with plural nouns.

“The whole” and “the entire” + singular noun

Remember: we can only use “the whole” and “the entire” with a singular noun (“television,” “woman,” “suggestion,” etc.).

“I slept through the whole flight. I feel great!”

“He spent the entire day trying to solve the technical issue and got nothing done.”

“We had to wait for the whole process to finish before we could try again.”

“A whole” and “an entire” + singular noun

Remember: we can only use “a whole” and “an entire” with singular nouns — no plurals and no uncountable nouns!

“Ursula never thought she could eat an entire carrot cake in less than a minute. But she did.”

“Come on! There’s a whole list of things we need to do before lunch. Let’s get started!”

“Whole” and “entire” (with no article)

Remember: we can only use “whole” and “entire” with no article with plural nouns, like “televisions,” “women” and “suggestions.”

“The new solar farm will be able to power entire cities at once.”

“Whole families had to share rooms after the earthquake.”

“He reads whole dictionaries at a time.”

What’s the difference between “whole” and “entire”

Is there any difference between them?

Although “whole” and “entire” have the same basic meaning, “entire” usually feels stronger. Use it when you want to emphasise how “100%” something is. 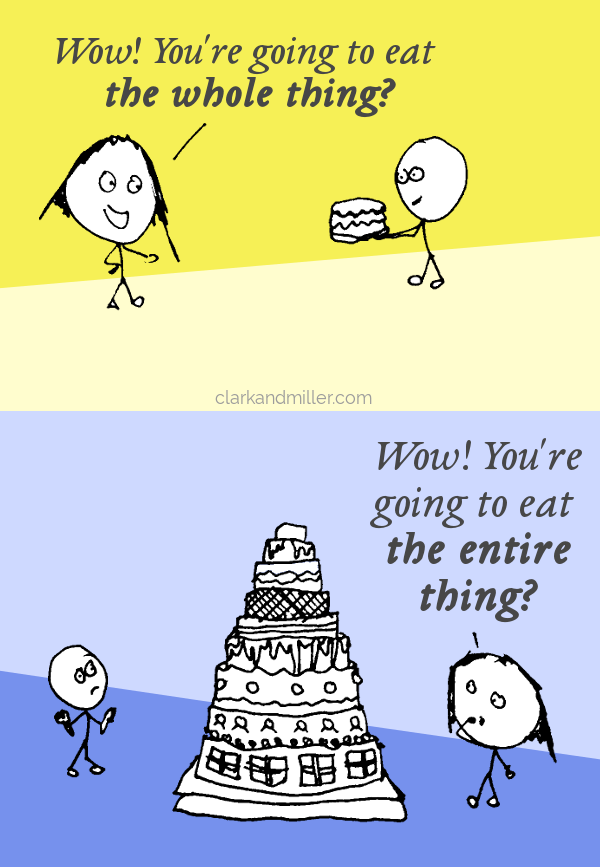 Common phrases with “whole” (as a noun)

There are two common phrases in English where we use “whole” as a noun. Let’s check them out one by one.

See someone as a whole

Sometimes it feels easy to figure people out.

Like when you go to a party and you meet Ranjit. And at the party, Ranjit is totally crazy. He’s just stolen a traffic cone and he’s telling you a crazy story about his gorilla friend called Karen.

So you form an opinion pretty quickly about Ranjit. And that opinion is “Ranjit is a crazy party guy.”

And so you call up Ranjit whenever you want to go out and have fun.

He has a nice family, he likes playing golf and he’s very serious about his job as a giraffe inspector. In fact, Ranjit is so much more than just a party guy.

Like most people, he’s multi-faceted — he’s got a lot of sides to his personality.

But if you just see him as the party guy, you’re not going to see the real Ranjit. You need to see him as a whole — as a complex, multi-faceted human being.

We all do this, right? We form an opinion about someone and then that’s the only thing we associate with that person.

But, of course, it’s better to try and see people as a whole.

Let’s check out some examples:

“I wish he could see me as a whole — not just the person in the photos I share on Facebook. Know what I mean?”

“Look! It’s time you started seeing yourself as a whole and not just some person who used to live on a farm.”

And, of course, there’s this joke: 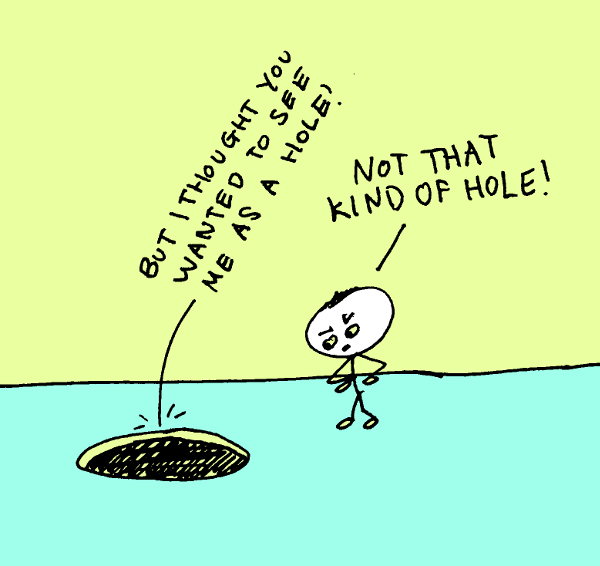 We use it when we’re assessing a situation or an experience or a project or a process or something like that.

It’s useful when we want to give a general idea about something — to describe the overall result.

It’s like we’re using some scales, and we’re balancing the good and the bad and coming up with a conclusion. 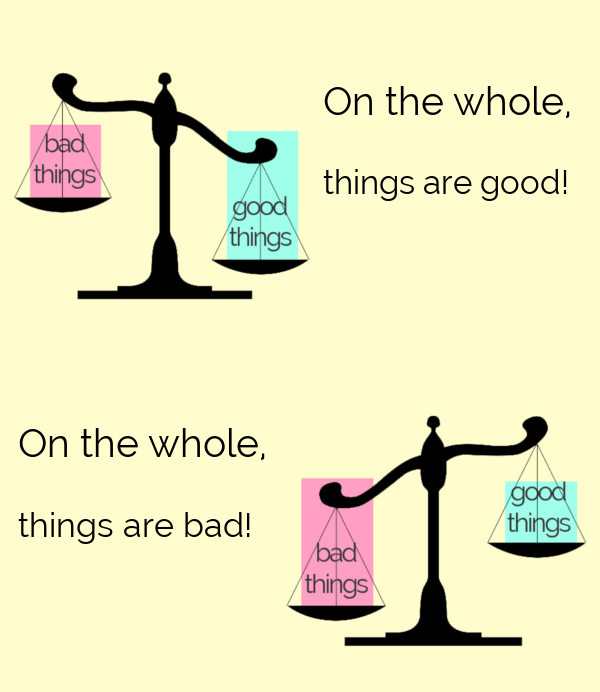 This phrase is especially good when you’re reaching the end of describing something (whether speaking about it or writing an essay), and you want to start drawing conclusions.

“There were a few technical issues, but on the whole I think the conference went pretty well.”

“The human body, on the whole, is surprisingly quiet if you think about how much work it’s doing all the time.”

“I’m sorry — the plan was awful! On the whole, it’s done more harm than good.”

And that’s all you need to know (probably) about “whole” and “entire.”

But before you move on, how about some practice?

Answer in the comments.

6 thoughts on “How to Use “Whole” and “Entire”: The Whole Picture”