Let me introduce you to my excellent and hard-working student, Pietro: 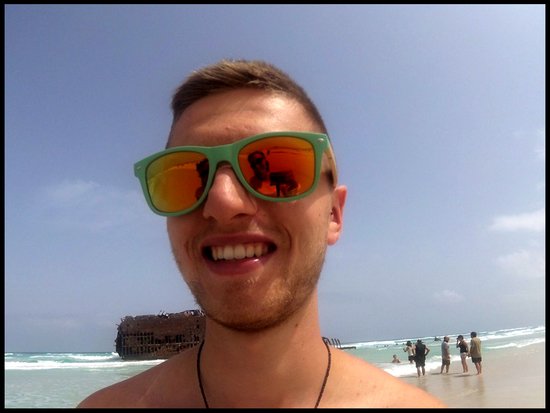 Not long ago, he asked me what he should use to practice listening in English.

So I thought about his situation.

Pietro’s planning to move to Cambridge to study and work, so he’ll need to be able to understand “real English” in “real” situations.

Now, we hear this phrase “real English” all the time. But what does it mean?

In a way, it doesn’t mean anything. Every time someone speaks or writes in English, it’s “real” English. But of course, there are important differences. Let’s look at some examples.

Listen to this woman:

And now listen to these guys:

I’m not going to ask you which one was easier to understand, because the answer’s obvious.

But which one do you think Pietro is going to need to understand more?

Sure, he’ll probably go to some lectures at university (he is a hard-working guy, remember?), but most of the time he’ll be socialising with other students, trying to pay his bills, dealing with the bank and arguing with taxi drivers (maybe).

In these situations, he’s going to need to know how to understand and how to use some important British English phrases.

I talked about some of these phrases in March, but there are many more.

How do we find out about these phrases?

Well, first we need to find a great source of “real” British English.

And here it is, courtesy of the lovely ladies and gentlemen of the BBC. I present you with The Listening Project.

It’s a bit like sitting in a cafe somewhere in Britain and just listening to two people talk. Completely naturally.

This is a fantastic place to listen to real English conversations, the kind of English that people in Britain use on a daily basis. These are also the kinds of phrases you won’t find in an English course book.

That’s because they’re not easy.

When you first listen to the conversation, you’ll look like this:

But I’m going to give you some steps to follow.

During one of the steps, you’ll look like this:

And during another step, you’ll hopefully look like this:

I only ask one thing from you now: follow these steps to the end and you’ll start to feel that you can really understand “real” English and not just the English your teacher uses.

If you don’t have the time to follow all 5 of these steps (about 20 minutes), it’s probably better if you go and check out some lovely cat videos on YouTube. Or one of our infographics!

Listen to the whole conversation (link below). Remember, I don’t expect you to understand much.

In fact, I expect you to understand NOTHING! Just get a feel for how the conversation sounds.

OK. You might be thinking “Gabriel is mental. How can I possibly understand this mad English nonsense? They’re just talking like … horses. Or something.”

The first time is always the toughest. Now it gets easier!

Why was that so difficult to understand?

That’s partly because you didn’t have any context.

Have you ever been sitting in cafe and decided to listen to strangers’ private conversations? I know I have.

Sometimes it’s impossible to understand. Even if they’re speaking your first language.

That’s because we need to know the context of the situation. This is soooo important for anything you’re doing in English, whether it’s listening like this, a great book, or just a chat with a friend.

Thankfully, the lovely people at the BBC provide us with the context of Floyd and Tommy’s conversation.

Here’s what we know:

For the full text of the introduction, click here.

Hello. 2014 will be remembered as the summer of high-end football. Reminders of the billion-dollar costs of the game are everywhere. But what happens lower down the leagues? Well, Floyd and Tommy have a shared passion for the game. Floyd showed huge promise as a teenager. Wigan Athletic gave him a scholarship, where he was a regular in the Premier Reserve League, playing with the giants of Liverpool, Newcastle and Manchester City. But when Wigan let him go, his confidence took a real knock. Tommy is a semi-professional player with Suffolk side Long Melford. It was where he met Floyd when he was 16. Their friendship and their love of football has seen them through good and bad times.

Now we know this, it’s easier to understand what they’re talking about.

This conversation is tricky to understand for two reasons:

Today, we’re going to deal with reason two — the phrases.

Here’s a list of phrases from the conversation. Have a look at them, but don’t worry about the meaning of the phrases yet.

Your task:
Your task is to listen to the conversation again, and listen out for these phrases. When you hear a phrase from the list, check the box next to it . See  if you can check all the boxes by the end of the conversation.

How many boxes did you check?

This is when I finally tell you what the phrases mean. Here’s the full glossary:

Wigan let him go
Wigan (the team) fired him from the team.

his confidence took a real knock
When something bad happens to you, it can hit your self-confidence. So your confidence takes a knock (a hit).

I still get niggles about…
“Niggles” is a way of describing small but continual regrets you sometimes have when you’ve made a decision and you’re not sure if the decision was right.

It’s all well and good but…
This is like saying, “Sure, that last thing that I talked about was OK, but the negative side of it is…”

Did you find it’s like that sort of…
We usually say this when we want to ask someone if what they’re talking about is similar to something else.

Do you reckon it’s that…
This is a way of saying, “Do you think that the explanation for what you were just talking about might be…”

my parents actually split up
His parents stopped their relationship. They probably got divorced.

that was followed quite closely by…
He’s just described something that happened (his parents splitting up), now he’s saying, “soon after that, … happened.”

you’ve got all of that coupled on
We use “you’ve got all that …” when we put the last few things we talked about together. Then “coupled on” means “attached to.”

it does get you down
It makes you depressed. The guy’s using “does” to make the statement stronger.

This is when you listen one more time, knowing a bit more about what Floyd and Tommy are talking about.

Remember, you’re still not going to understand everything (even I don’t understand absolutely everything they’re talking about), but hopefully you’ll feel a lot more comfortable with this completely natural “real” conversation:

So, do you now feel ready to wander around British cafes listening in on private conversations?

I strongly recommend practicing more by listening to some more Listening Project conversations and trying to pick up new phrases.

If you do, then please let me know in the comments what they are. Even if you only learn one or two phrases, that’s a success! I’d love to hear how you do.