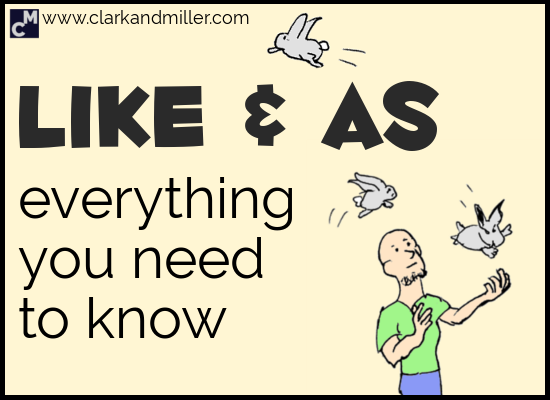 But, maybe because they’re so simple, these two words can cause a lot of confusion when you’re learning English.

Let’s take a look at the differences (and similarities) between “like” and “as” and solve this once and for all!

The most common way of using “like” and “as” is when we’re trying to talk about how two things are similar (or even the same).

OK. But why are we looking at him?

Well, did you know he was an awesome dancer?

And I want to ask you a question.

Are you a good dancer, too?

You are? That’s great.

But can you dance in the same, slightly mad, way that Prince can?

Don’t worry — you don’t have to answer that.

Instead, just think about the question.

I want to ask you if you do something in the same way (or as well as) Prince.

“Can you dance as Prince?”

Well, there are two ways of looking at this: the formal way and the more relaxed way.

Here are the formal rules: 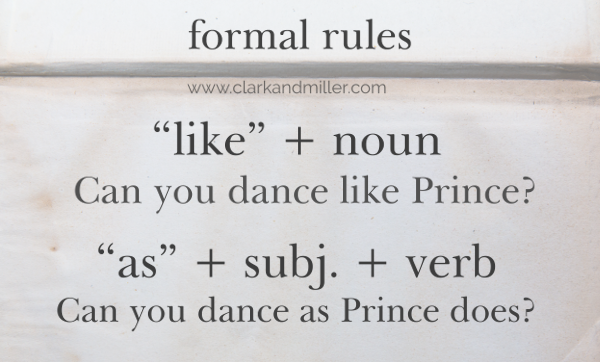 So we can say:

“Can you dance as Prince does?”

Using “as” in this context (“Can you dance as Prince does?”) sounds a little strange for some people — it sounds quite formal and a little old fashioned.

Although it’s technically correct, it can sound like your great-great-uncle Cedric just arrived in a time machine and started talking about Prince: 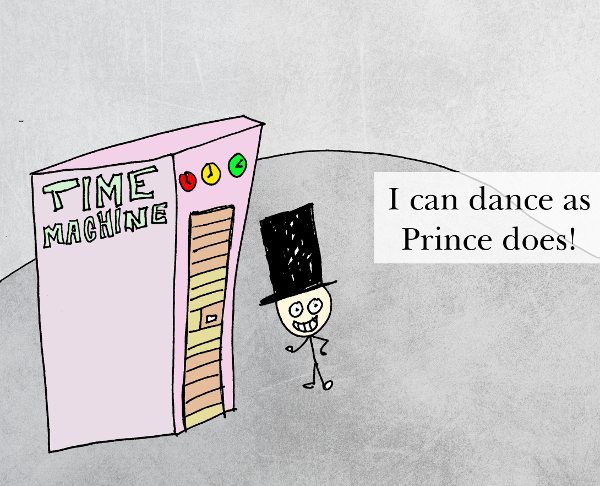 Instead, in modern, informal English, a lot of people use “like” + subject + verb: “I can dance like Prince does.”

Now, it’s important to point out that this is still considered technically incorrect by some people, and might want to avoid it in an exam or your PhD thesis.

But it is how a lot of people speak, so I’d recommend it for casual, informal situations.

And that brings me to the more relaxed rule:

Yep! In MOST situations, you can use “like” with a subject-verb clause.

So, in short, here’s how you can use “as” and “like” when you want to talk about similarities:

Phew — I’m glad we cleared that up.

Now that the tricky part is over, we can turn to some more fun uses of “like” and “as.”

“Like” and “as” to talk about jobs and work

We often use “like” and “as” for jobs and work.

When we’re telling people what we do for a living, there are two typical responses:

“I work as a rabbit juggler.”

(If you’re a rabbit juggler, that is.) 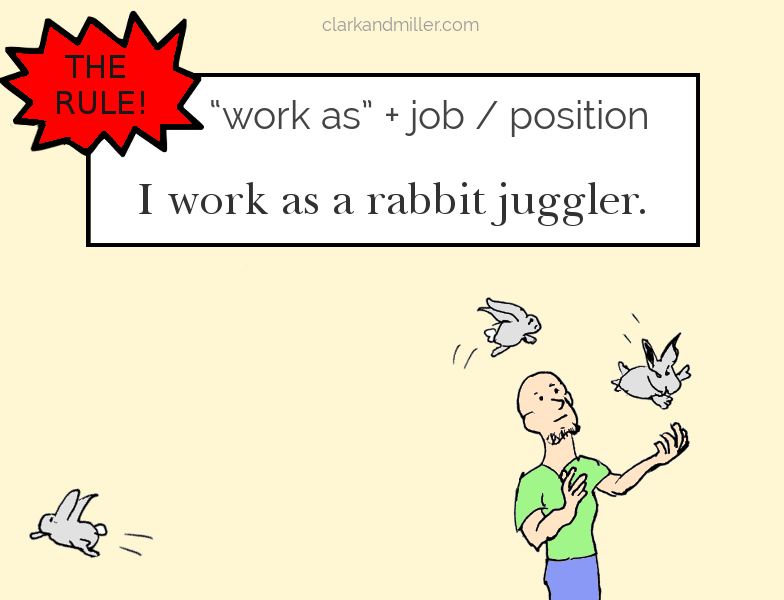 Well, when we use “like,” we’re not talking about what someone does.

We’re describing how they do it.

For example, if you’ve been working really, really hard without breaks and just a little time for a quick nap, then you can say:

You’re not saying that your job is being a dog. That would obviously be weird and bring up lots of technical issues.

You’re saying that you work as hard as a dog does.

Which is very very hard, apparently.

“Tammy works like she has nothing to live for.”

“Jeremiah works like a person with nothing to lose.”

There’s also this rather inspiring quote:

This is very similar to the job thing.

“As” describes what someone is.

Let’s dive straight into an example: 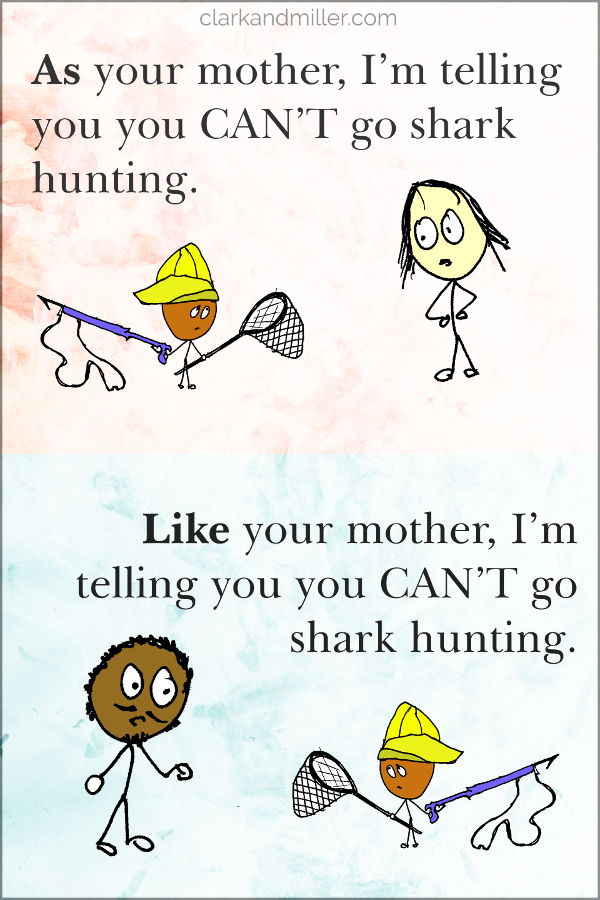 See what happened there?

It’s not just people that can have jobs and roles — things can, too.

Have you ever been stuck in the rain without an umbrella?

What did you do?

Some people might go and hide in a shop doorway and wait.

Others, like myself, would just ignore the rain. (I mean, it’s only water, right?)

But some people — more creative people than me — would get something like a newspaper and hold it above their head to protect them from the rain.

In short, they use the newspaper as an umbrella.

Or think about when you’re staying at an Airbnb and need to use your laptop.

You look around and you see that there’s no desk or table.

There’s a big wall painting of flowers and a novelty wine bottle holder in the shape of a giraffe, for some reason.

So what do you do?

Yep — you can use the box as a makeshift desk.

(Did you notice the word “makeshift” here? This is one of those words that only works in one situation — this situation when you’re using things as other things. Nice, though, isn’t it?)

So how can we use “like” to talk about function?

Well, when you’re using things as other things, you can also use “like.” There’s no real difference — it just sounds rather informal and casual.

Other ways to use “as”

OK! Now we’re truly leaving the area of much confusion.

So let’s relax and look at other interesting ways we can use “as” and “like.” Let’s start with “as.”

Sometimes, “as” can mean “because.”

What’s the difference between “as” and “because”?

Well, essentially there’s no difference at all in this context.

“As” tends to be used in more formal situations and makes you sound a little more intellectual.

But maybe avoid it when you’re chatting to friends in the pub. Unless you go to the pub with JRR Tolkien and Aldous Huxley. In which case, congratulations on being able to resurrect the dead. Please be careful with your invention.

“I’m sorry, we can’t accept your application as it’s all been written in orange crayon.”

“As you’re still here, why not give us some help?”

“Well, I was thinking that, as it’s my birthday and everything, I don’t have to do my homework today?”

However, be careful because this use of “as” can be confused with …

Again — there’s no real difference in meaning when you use “as” this way. It’s just an alternative.

And it’s nice to have an alternative, right?

That’s why we have herbal tea and modern art.

“As they were walking up the mountain, the rain continued to get worse.”

“She started singing as she entered the tunnel. It sounded awesome.”

“As you’re here, why don’t you make yourself useful.”

I’m sure you’re familiar with this one.

“As” is very useful when we’re comparing things.

I’ve actually written a whole blog post on how to compare things, which includes this form.

But, in short, you can use the formula “as” + much/adjective/adverb + “as” to say two things are the same:

“He’s a lot happier now. He doesn’t work as much as he did in his last job, and he sees his kids more often.”

“Inma can do the food. Her cooking is just as good as her grandma’s.”

“What about Tony? Can he do the report as quickly as you can? It needs to be finished tomorrow.”

So here’s my cat, Freya:

Obviously, I like cats. I mean — why would I have one if I didn’t like them? I’m weird, but not that weird.

So, I can say that I like cats, which would be true.

And I can also use Freya as an example, producing the sentence:

Now, this can have two meanings.

It could mean that I like all cats and that Freya is a good example of a cat, and so I used her to show why I like cats.

But it could also mean that I only like cats if they’re similar to Freya (closer to the “like your mother …” example above).

So this use can be a little ambiguous — a little unclear.

“I always feel a bit weird before doing something that involves paper, like origami or bureaucracy.”

When we’re comparing the way things look or sound or smell or taste or feel, we can use “like”:

“Oh my God! It tastes like real meat! I can’t tell the difference!”

“Eugh! Can’t you do your experimental cooking somewhere else? It smells like someone died!”

This one will probably annoy some people.

That’s because this is a very casual and informal way of using “like.”

How does it work?

Well, some words just don’t really have a meaning.

They’re more like fillers to give the sentence a little more momentum while you’re trying to find the words.

You know what I mean, right? Every language has words like this.

It’s like a little signal that says, “OK, I haven’t totally figured out what I’m going to say here, but please bear with me as I try to describe it well.”

OK. There we have it: everything you need to know about “like” and “as.”

But, before you go, why not practice this a little?

2 thoughts on “Like and As: Everything You Need to Know”