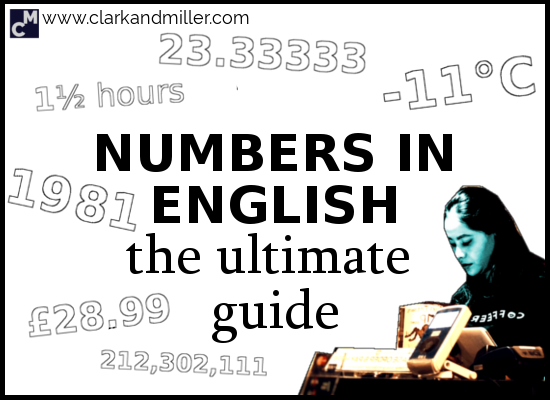 This is the ultimate guide to saying (or reading out) numbers in English. Also check out Maths Vocabulary in English: Do You Know the Basics?

Today, you’re going to learn how to say different types of numbers in English.

We’ll look at how to say:

OK. Take a look at these sentences and see if you can say the numbers correctly.

Don’t move on to the next part until you’ve tried to say them. It’s like a test — but a fun one!

Well, let’s see if you were right.

OK. There are four things you should think about here.

1. Break big numbers up into pieces!

See the commas between the numbers? (They’re full stops in most languages but not in English — because English likes to be different!)

Those commas show you how to break the number up. So just say the numbers between the commas and add “billion,” “million,” “thousand,” etc. afterwards: 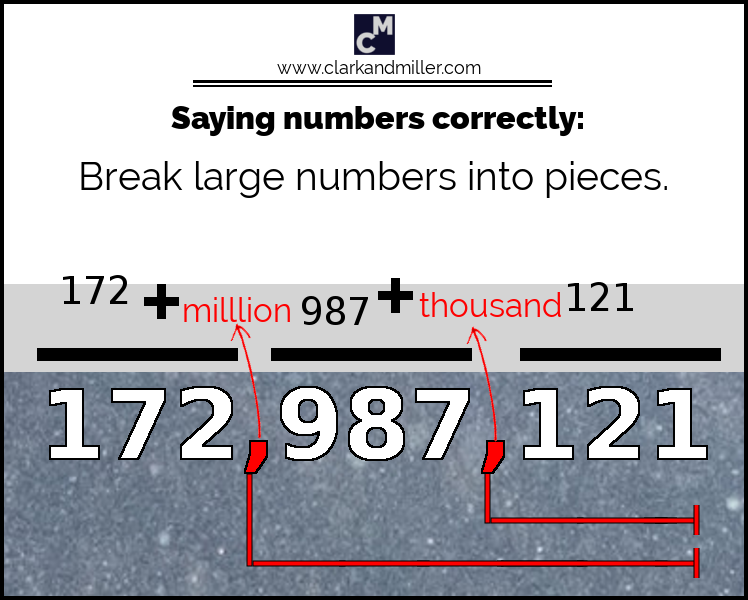 Just remember, when we’re saying a big number, the numbers are not pluralised:

3. Say “and” after “hundred” (if you prefer British English)

Did you notice the “and”?

Basically, every time we say “hundred,” we say “and” next. 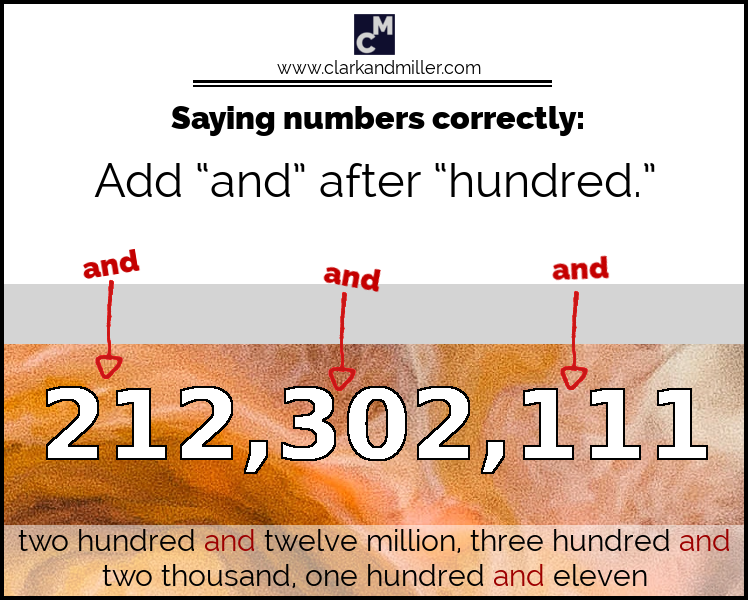 Remember — this doesn’t work if there are just zeros after the hundred: 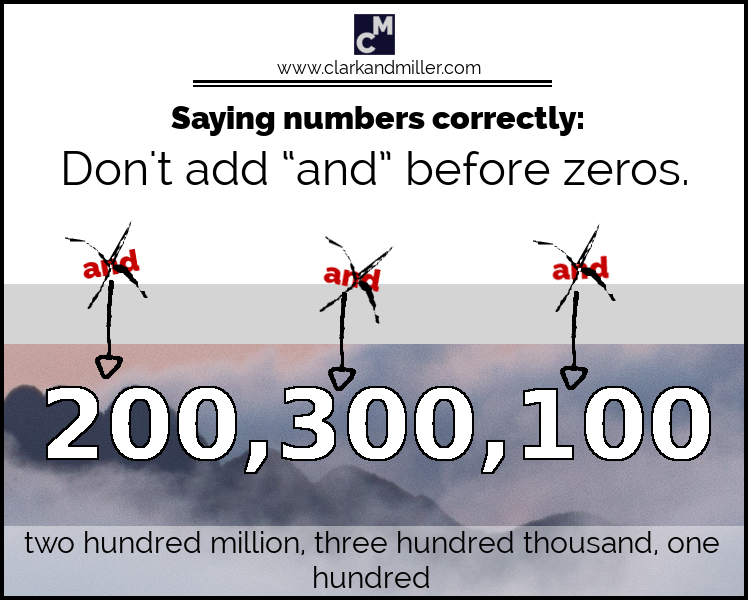 But it’s worth remembering that most English speakers don’t add “and” — it’s usually just the Brits. So you can ignore this rule if you like.

With the following numbers, you have freedom of choice:

OK. Look at these sentences. How do you say them?

There are two main rules at work here:

That’s the order we use when we talk about prices: 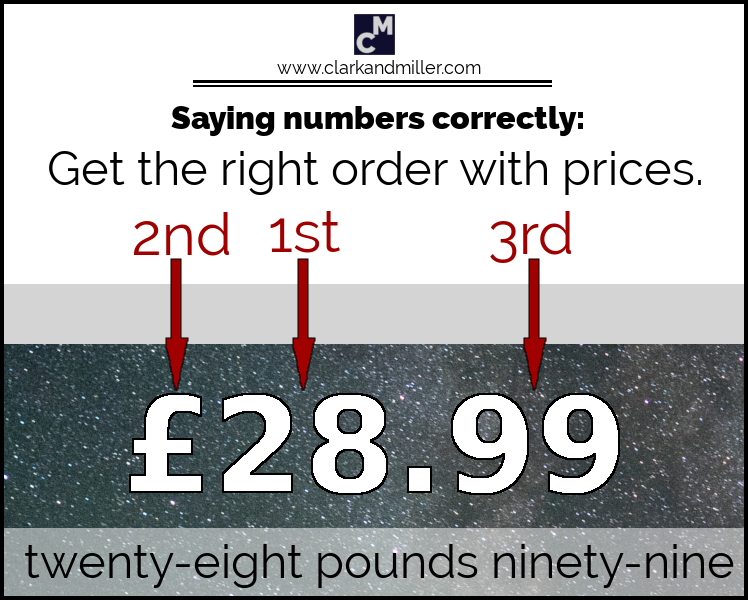 In fact, very often we don’t even say the currency. So you could just say: 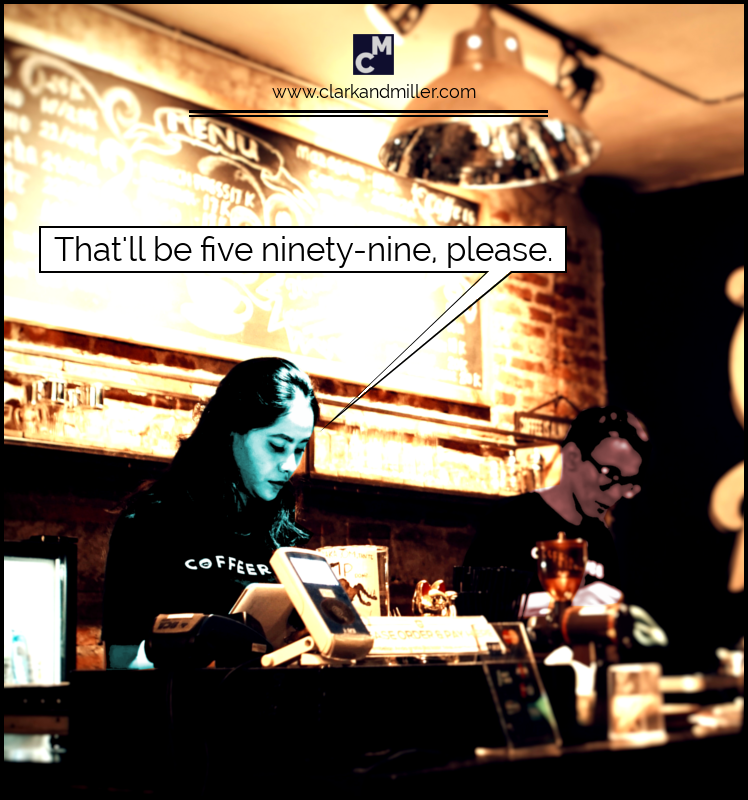 If you’re talking about big numbers all the time, it doesn’t make sense saying a long word like “thousand” again and again.

Fortunately, we can shorten “thousand” to either “grand” or “K.” 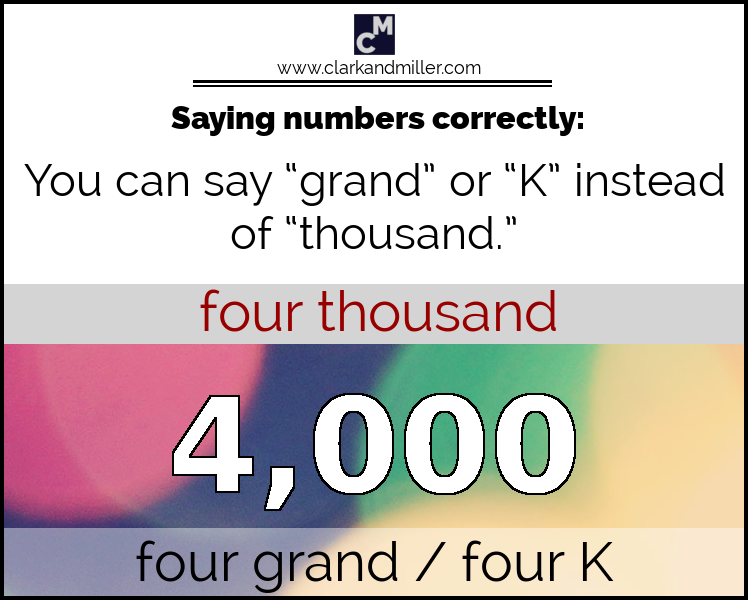 But remember, it only works when the number is exactly on the thousands: 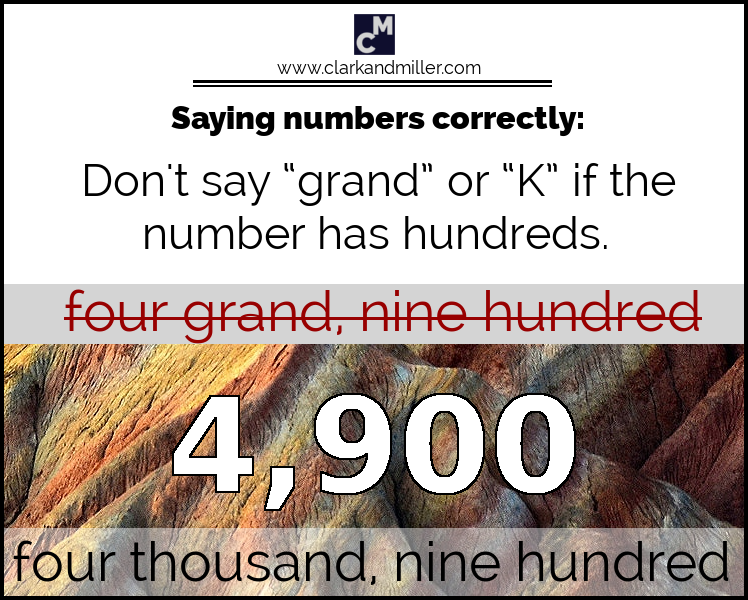 OK — can you say these times correctly?

Most of the rules here are a bit different because they depend on context.

So when we’re hanging out with our friends (like in the first and fourth examples), we almost never use 24-hour time.

We just say the numbers.

That means we don’t say “nineteen o’clock.” Ever. Just never say it!

And we never, ever, ever say “half past twenty.”

Instead, we just use 12-hour time.

When I explain this to English learners, they often ask, “But how do you know whether it’s morning or evening?”

And my answer is always the same: If you like, you can say “p.m.” or “a.m.” to clarify. But how many people go to the cinema at 7 in the morning? Usually, the context is clear enough.

And then they say, “Thanks. Also, your hair is looking great today.”

And we can certainly expect to hear it when it’s being announced at an airport or station (like in the third example). 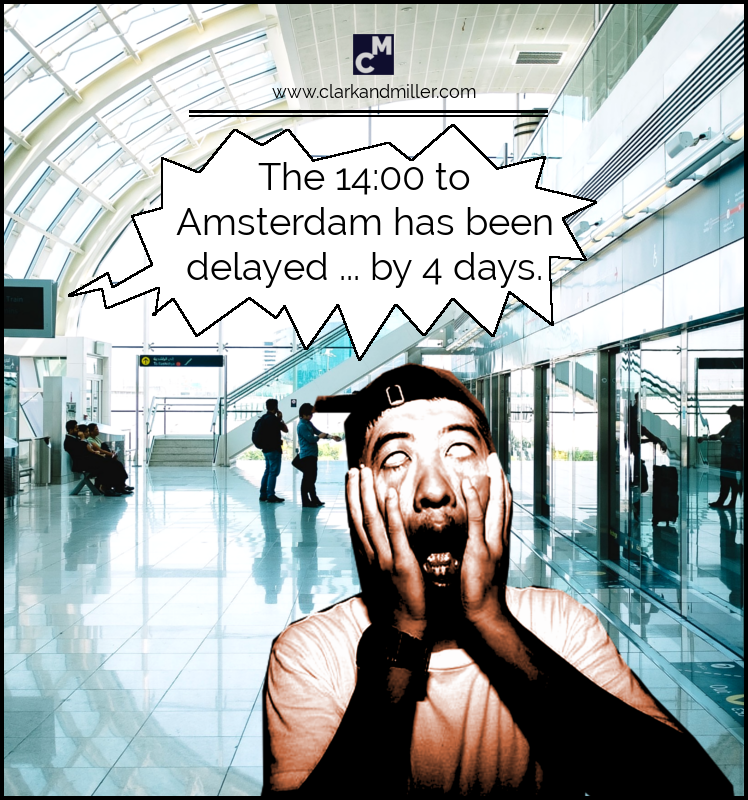 3. There are three ways of saying “half past something”

… and none of them includes “o’clock.”

The last example above (3:03) is a little tricky. If you have to express a time like this, instead of saying “zero,” just say “oh.”

OK. You may be wondering what a “decimal” is.

Well, you’re about to find out!

First of all, let’s try saying these sentences:

There are three things to remember here:

2. After “point,” say the numbers one by one

Mathematically speaking, the numbers after the point (665 in the example above) are not hundreds. So we don’t say “six hundred and sixty-five.”

After the point, we just say the numbers one by one (“six six five”).

Maths is weird, and I find it strange that stuff like this can happen with numbers.

But when you have the number 6 repeating itself forever, I’d recommend not saying the number again and again until you die of thirst or boredom and all your friends have left the room.

Just say it once and add “recurring.”

In this case, just say the pair of numbers that repeat themselves (in this case “one three”) and add “recurring.”

You know what to do:

There are a few very simple rules here.

Because ordinal numbers are very specific (How many first places are there in a race?) we almost always use “the” before them.

Make it an automatic habit!

Here’s a quick tip, not just for ordinal numbers but generally in English:

You don’t have to use “the” if you have a possessive.

The third horse on the left is looking at me strangely.

But you can also say:

May I introduce you to my seventh wife?

Generally speaking, to create an ordinal number, you just add “-th.” (Although sometimes the spelling can be tricky.) Click here for the full list of ordinal numbers.

It’s the same for small numbers:

This is the fifth computer he’s bought this year.

You’re the ninety-ninth person to ask me that today.

But be careful. If you’re making 1, 2 or 3 ordinal, remember that they’re completely different:

It’s the same for small numbers:

It’s the first Sunday of the month — and you know what that means!

It’s the fifty-second week of the year. Finally!

OK. You know the drill. How do you say these sentences?

1. Use an ordinal number on the bottom

Remember the ordinal numbers we talked about above?

We use them for fractions, too.

Then you have “one third.”

2. Make the bottom number plural if the top number is 2 or higher

Remember that if we’re dealing with a fraction that doesn’t have “1” on the top, the ordinal must be plural.

Take the number on the top as usual (“2”) and make the ordinal on the bottom plural, so “third” becomes “thirds” (because in this case, there are two of them).

When the bottom number is 2 or 4, we use “half/halves” and “quarter/quarters.”

And instead of saying ¼ as “one fourth,” we say “one quarter” or “a quarter.”

4. Get the order right with fractions!

The usual way to say these numbers is as you read them. 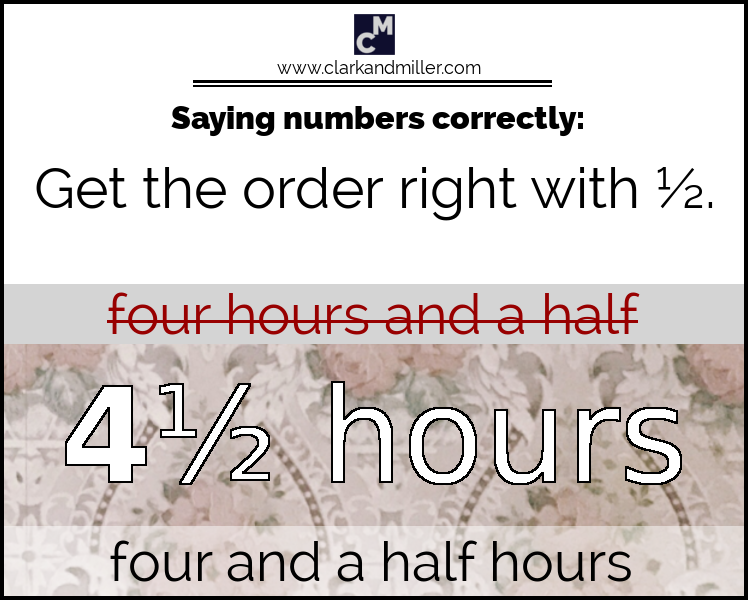 Do you remember at the beginning of this post, we saw how we can choose between “one hundred” and “a hundred?” 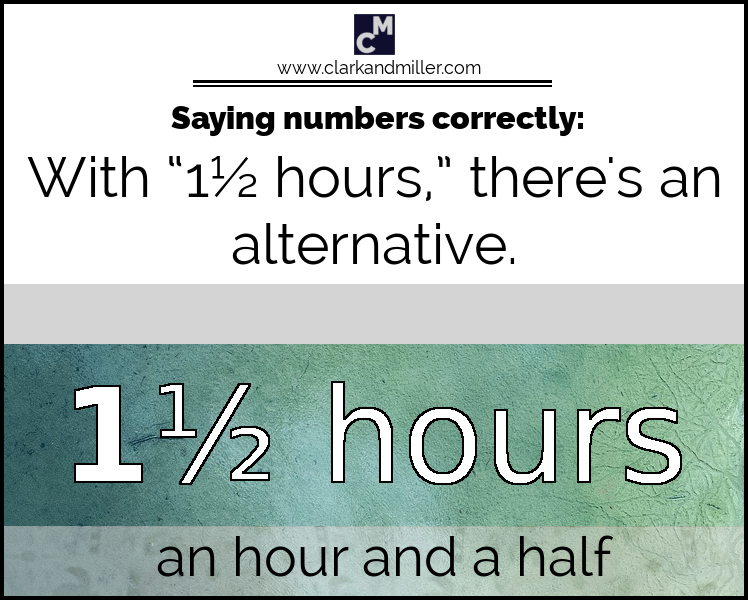 5. When we say 1 ½, the following noun becomes plural

This is a rule in English that a lot of books don’t talk about much.

But here I am … talking about it!

I guess the logic is that if the number is anything more than one (including 1.000000001), it’s officially plural.

Talking about the temperature

OK. Can you say these correctly?

1. There are three ways of talking about temperatures below zero

So when it’s that cold and your hair is freezing, then it’s probably below zero, right?

Remember, you don’t need to say “Celsius” or “Fahrenheit” if it’s clear from the context.

In fact, you don’t even need to say “degrees” if it’s obvious you’re talking about the temperature.

Also remember: when you use the third option (with “below”), you don’t need to say “zero” or “degrees,” but only do this when it’s clear whether you’re discussing Celsius or Fahrenheit. And make sure that it’s clear that you’re talking about the temperature and not your downstairs neighbours.

2. Celsius or centigrade or Fahrenheit?

OK. This is pretty simple.

Celsius and centigrade are exactly the same. So don’t worry about mixing these ones up. Because it’s impossible!

“Fahrenheit” is the weird measurement that the Americans use that I just don’t understand.

Not the space with aliens and frightening amounts of radiation. And Sandra Bullock acting badly (as usual).

I mean the space of a room or a box or a cave.

This is pretty simple. You have a choice here.

That’s it! Nothing else to see here. Please move on.

Talking about speed in English!

OK. Remember to say these before reading on.

But which one to use?

My advice is that in most situations, use “an hour.”

“Per hour” sounds a little more technical and formal.

But the difference is small here, so I wouldn’t worry about this too much. There are better things to worry about. Like global warming.

2. The units are plural

It’s important to remember that the distances here are very likely to be plural (unless we’re talking about 1mph or 1km/sec).

OK. There’s a lot here. But the good news? It’s all pretty simple.

For almost all the years, we cut them into two — the first two numbers and the second two: 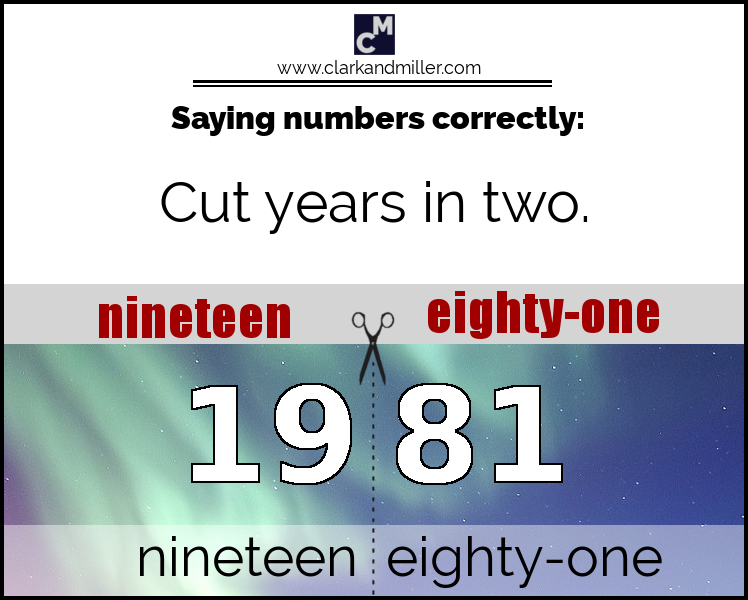 3. Use “hundred” or “thousand” when you see lots of zeros

For some reason, when the year 2000 came, we decided to just forget all the rules we made for the years.

But what about after that? What happens after 2010?

“But that’s mad! Does this continue forever?” I can hear you asking.

The answer is “yes, it is mad” and “fortunately not.”

OK! You’ve made it to the end! Congratulations! You rule!

You are now a MASTER of saying numbers in English!

But you’ll need to do one more thing to really take in what you’ve learned today.

Look at these numbers — can you write them out in full?

Write your answers in the comments!

Did you find this useful? Do you know any people (or koalas) that might also benefit from this? Then BE AWESOME AND SHARE! Spread the knowledge!

50 thoughts on “Numbers in English: The Ultimate Guide”