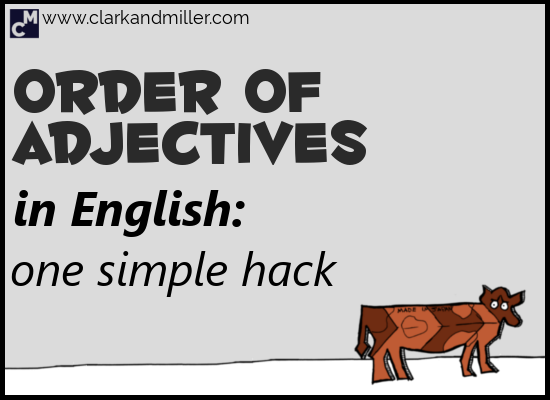 You’re about to learn my simple hack for the order of adjectives in English. For more adjective goodness, check out 72 Appearance Adjectives You Need to Describe People in English.

Adjectives in English are completely mad.

Well, if you want to use more than one adjective in English, you have to be very careful.

For example, you would (almost) never say “a brown interesting cow.” You need to say “an interesting brown cow.”

Because the order of adjectives — which one comes first, second, third, etc. — makes a difference to how natural you sound.

Well, there’s quite a complicated system, and we’ll look at that in a minute.

But before we look at that system, here’s the good news.

So the good news is that these complicated rules don’t always matter.

In most situations, some adjectives can be moved around without much problem.

That means you don’t have to memorise all these rules too carefully. You can be a little free with them …

The standard order of adjectives in English

Not everyone agrees on some of the details, but generally speaking, you should order adjectives like this: 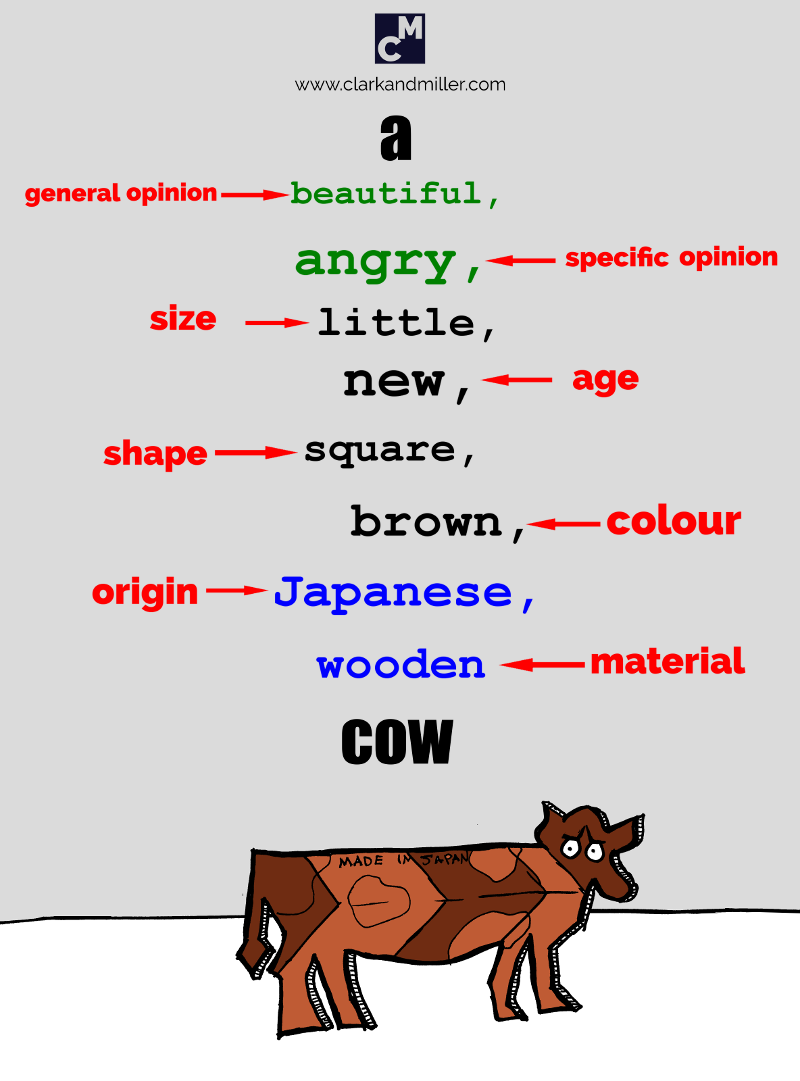 Click here to see the order of adjectives in a table.

(Did you notice the colours? I’ve highlighted some of the adjectives in green and some in blue. You’ll see why later …)

So that means, if you really wanted to, you could say:

Except, you probably wouldn’t use ALL these adjectives at once. That almost never happens … in any language. (Unless you’re just trying to be funny.) Usually, when we describe things, we only use a few adjectives.

Even so, the order you use them will affect how natural it sounds, so it’s still a good idea to follow the order:

“Wanna come to mine and see my beautiful, Japanese, wooden cow?”

“Wanna come to mine and see my angry, little, Japanese cow?”

OK. But this adjective order system is pretty complicated, right?

I mean — do we really have to learn this WHOLE confusing system?

The answer is no, not exactly …

My simple hack for the order of adjectives in English

After working on lots of different combinations of adjectives and experimenting with the order, I’ve noticed that there is some room for flexibility.

As long as you put the adjectives in boxes …

Keep the opinion adjectives at the beginning.

Keep everything in the middle, except for …

… the colour, origin and purpose adjectives, which go at the end.

Here’s how they all look together: 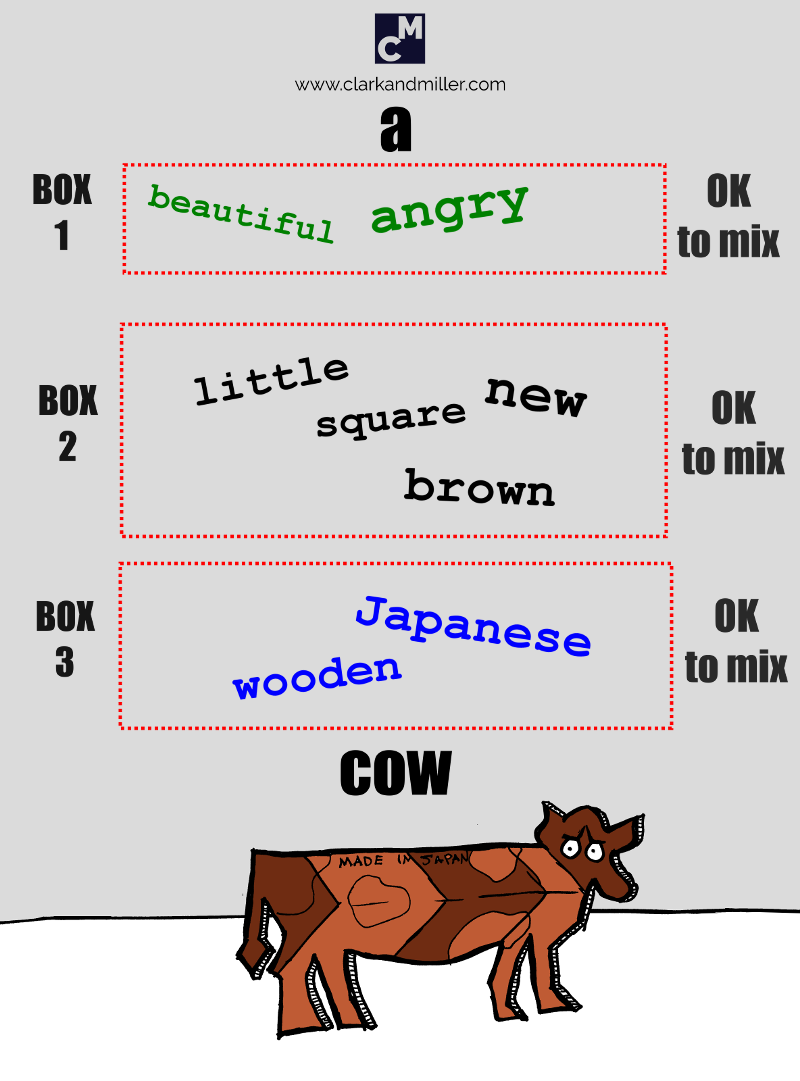 I think that if you follow this simple rule, you’ll sound very natural most of the time.

You can mix the greens:

“Wanna come to mine and see my angry, beautiful cow?”

Or you can mix the blacks:

“Wanna come to mine and see my brand-new, little, square cow?”

And let’s mix the reds! Why not?

“Wanna come to mine and see my wooden, Japanese cow?”

So the trick? Keep the green, black and blue in order, and you’ll be fine.

However, it’s important to remember something:

Some people, course books and examiners might say that these aren’t technically correct, and if you’re writing an IELTS paper or applying for a job, I’d recommend trying to stick to the stricter adjective order.

However, outside formal settings, mixing the greens, blacks and blues will not get you into trouble!

It will not make people look at you strangely!

In fact, unless you’re talking to an English teacher or a grammarian, no one will even notice.

Let’s try it out!

Here are some lovely pics of totally random things that I’ve created just for you.

How many adjectives can you use to describe them?

Try to describe them without checking the tables — get a feel for the green adjectives, the black ones and the blue ones.

Leave your answers in the comments, and I’ll let you know how well you did! 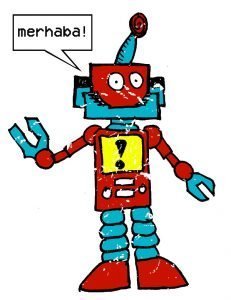 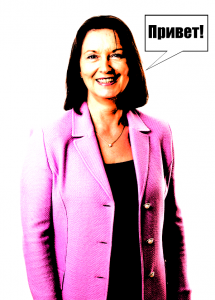 And pic 3 (from my recent trip to Berlin): 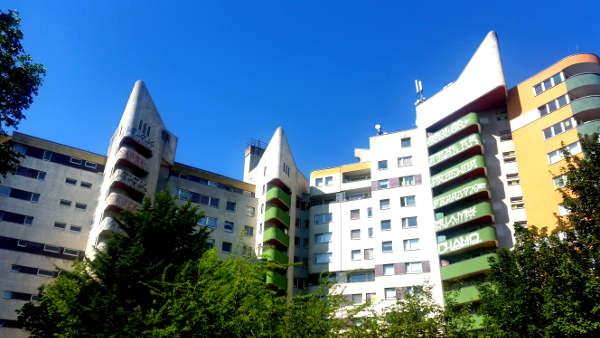 19 thoughts on “Order of Adjectives in English: One Simple Hack”