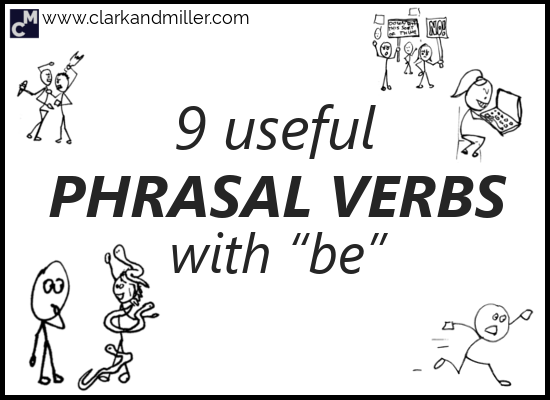 You’re about to learn some useful phrasal verbs with ‘be.’ Also check out 5 Surprisingly Common Phrasal Verbs That Most Learners Don’t Know.

Some of the most common phrasal verbs in English are phrasal verbs with “be.” You’ll hear these everywhere — especially in informal English.

Here are 9 of the most useful phrasal verbs with “be.” 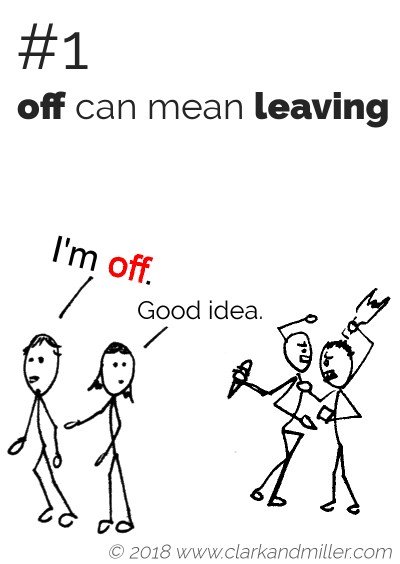 This one means “I’m leaving.”

So you’re sitting down with some friends at their house watching TV and having a bit of a chat.

Then you check the time and realise you need to get back home — you’ve got an early start in the morning.

It’s a nice, informal way of doing it and sounds better than just saying “I’m going.”

And it’s definitely better than just standing up and leaving without saying anything.

However, when someone does do this, you could use the common phrase:

And remember that this is pretty informal — so be careful who you use it with.

She’s up to something. 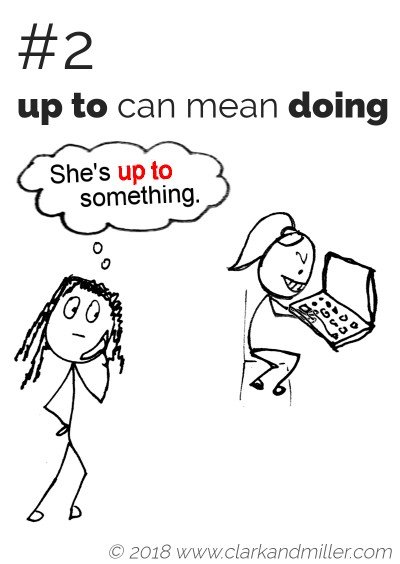 It simply means “She’s doing something.”

There are a few ways we can use “up to.”

If we say someone is up to something, it usually means that we think they’re doing something dodgy — something suspicious. We shouldn’t trust them.

We can also say “She’s up to no good. I don’t know what it is, but I know it’s not good.” Think about how you feel when you see a group of 10-year-old boys hanging out together by the empty building on your street.

But when we use “up to” in a question, it becomes neutral. We’re simply asking what someone is doing:

“Up to” is especially useful if you want to make plans with someone, and you want to check if they’re free:

“Hey, Irfan! What are you up to this weekend?”

When we want to use “up to” in the past, we usually use “get,” otherwise we sound suspicious again:

“What did you get up to last week?” 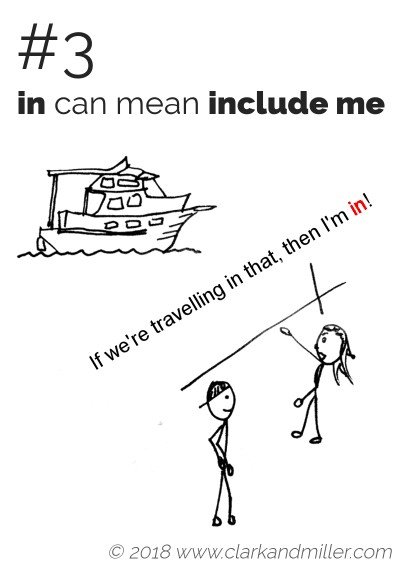 I want to be part of this plan. Please include me!

We often just use the phrase “I’m in!” to show that we’d like to be included.

It can be some sort of social thing:

Or something more business oriented:

You can use it in questions:

“OK — we need four people to play this game. Are you in?”

We also have the phrase “count me in,” which means the same thing but shows just a little more enthusiasm.

“£600 for two hours of sitting still in front of art students? Count me in!” 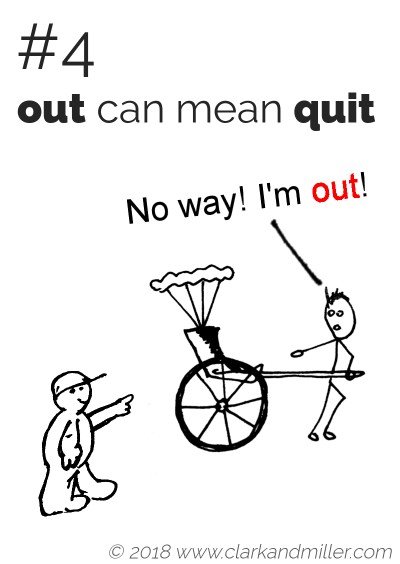 I’ll give you one guess.

It means you don’t want to participate in something anymore.

Once you’re “in” — once you’ve agreed to do something — you don’t absolutely have to stick to it. Sometimes you just have to change your mind.

“So you’re telling me I’ve got to sing the whole song by myself in front of everyone? That’s it. I’m out!” 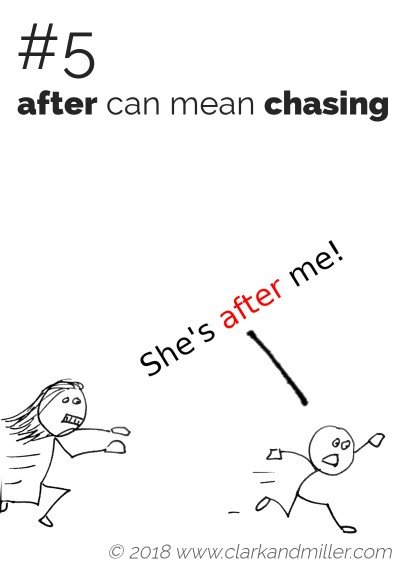 This can mean that she’s chasing you.

Or it can mean that she’s looking for you because she wants you to do something for her.

A classic example is from those American TV series we all know and love, even if we pretend we don’t. (We all do, right?):

“You’d better run, Charlie. The cops are after you. And when they find you … you’re dead meat!”

That’s how they talk in America according to television.

We can also be after something instead of someone.

It pretty much means the same thing, but it’s a bit less scary:

“Hiya. I’m after a silver bracelet. Have you got any?” 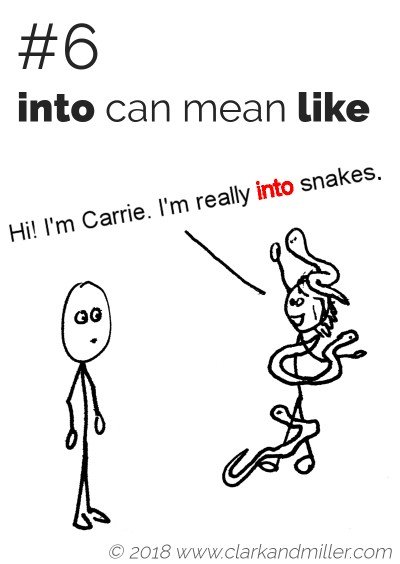 If you’re into something, it means that you like it.

And you probably know a lot about it.

Most people are really into something.

Me? Well, I’m really into language and music. I listen to loads of different kinds of music, and I know a lot about music. And language.

Some people are really into gardening. Or yoga.

Some people are really into their jobs. Sometimes that can be good, and sometimes it can lead to burnout.

I never believe anyone who says they’re not into Star Wars.

We often use “into” with “get” if we want to describe when it started:

“When exactly did you get into bird watching?” 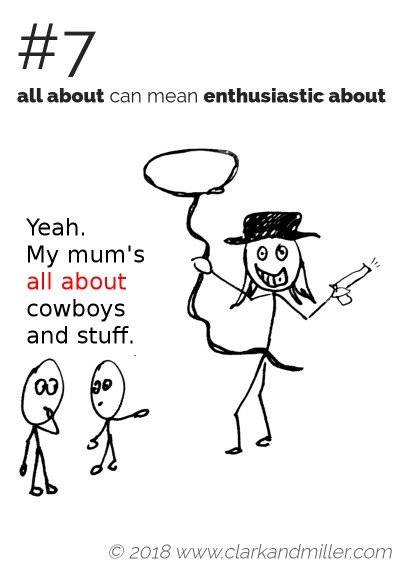 This is a way of saying “she’s into.”

It means she’s very enthusiastic about something.

“Have you met Jamal? He’s all about gadgets and technology. It’s all he talks about.”

“I’ve been listening to nothing but Radiohead these days. I’m all about them at the moment. Going on a Radiohead trip. I really love that band. Radiohead are really one of the best bands ever. They’re fantastic!” 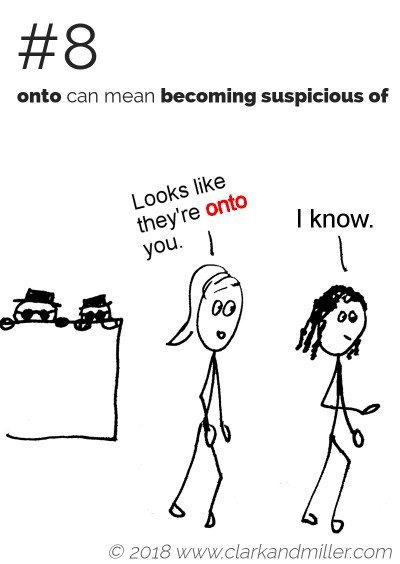 But they know! THEY KNOW!

And they’re going to figure it out!

OK — so let’s go for a Hollywood-style example and a real-life example.

“I just found a microphone in my room. The Feds (the FBI) have been bugging me (recording me). They’re onto me! I don’t know what to do!”

“I think Sam’s onto you about the surprise party.”
“Why do you say that?”
“She asked me what I was doing on Thursday, and she had that look in her eye — as if she knew.” 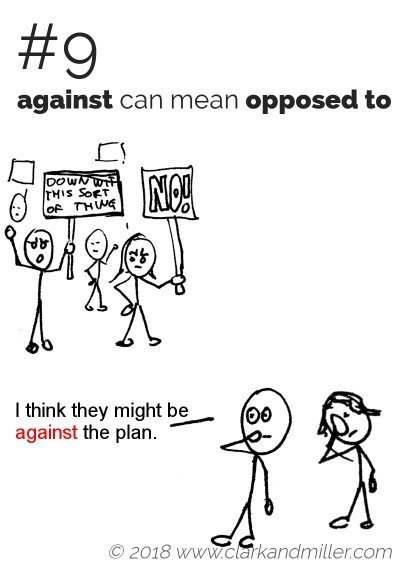 “For” means you support something.

“Against” means you oppose it.

“Two million people against the war were out on the streets today in the country’s largest mass protest.”

“So, here’s a difficult question. Are you for or against the plan to allow cars into the high street?”
“I’m against it. Dead against it.”
“Well — I’m all for it.”
“Don’t you work for the oil and gas industry?”
“Erm … bye.”

Notice that we can say “dead against” if we’re strongly opposed.

Also notice that we can say “all for” if we strongly support it.

Good work — now you can use phrasal verbs with “be” to talk about what you like, where you’re going and whether the FBI have found you yet.

I’m going to leave you with two questions that you should definitely answer in the comments:

10 thoughts on “9 Useful Phrasal Verbs with BE”