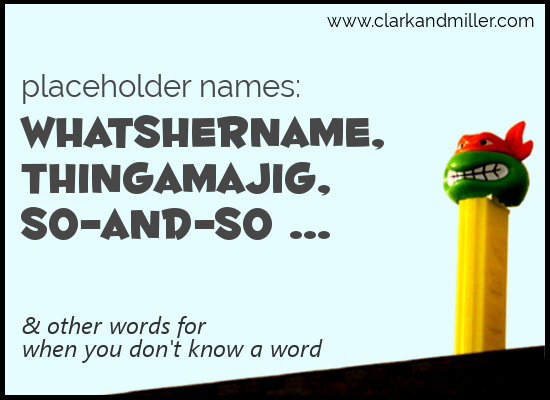 Do these sentences sound weird to you?

These sentences are not incorrect … but they sound a little strange, right? A little unnatural.

So what’s the problem?

Well, these sentences need what we call placeholder names.

“But what on Earth are placeholder names?” I hear you say.

And to that, my friend, I say, “Good question! I shall answer that question right …

What on Earth are placeholder names?

When you’re learning English, it’s very easy to think that you need to use the specific word for everything (in the above examples, “activities,” “artefacts” and “the woman whose cat you looked after last year and who played the piano for your sister’s birthday”) — that you need to be 100% accurate all the time.

But in reality, we don’t speak totally accurately.

In fact, using the technically “correct” word or describing things in too much detail can just sound weird.

Instead, we often use placeholder names.

A placeholder name is a word we use instead of a word we can’t remember, a word we don’t want to say or a word that isn’t important.

Placeholder names are really useful because they save you from having to think of the “right” word all the time.

Plus they can make you sound more natural.

So let’s take a look at 18 placeholder names in English.

OK. So let’s start with the sixth most common noun in English.

And that’s the word “thing.”

We use “thing” all the time.

We use it in particular phrases, like “the thing is…” or “one thing leads to another.”

But we also use it when we don’t know the name of something: 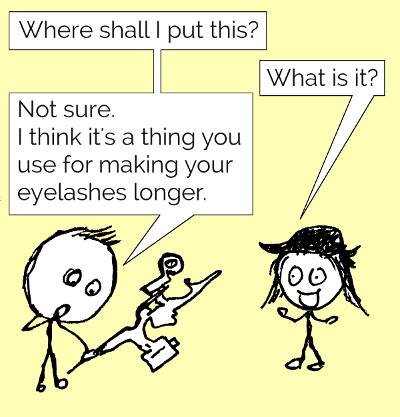 And sometimes, when we do know the name for something, we still use “thing.” Because we’re lazy.

We just don’t want to use the brain energy to remember a word that we don’t usually use.

And when the context makes it clear what that thing is, then we just say “thing” or “stuff.”

“Barry’s job? He makes things out of wood.”

(This is much easier than saying, “He makes furniture, boxes and similar objects out of wood.”)

In fact, sometimes using “thing” (or “stuff”) is actually the most natural option.

Look at these sentences – which one sounds more natural?

Or what about these?

Very often, using the specific word for something actually sounds a little unnatural. It can be overly technical or formal.

“OK. I’m coming! Just give me a minute to get my things.”

“This thing is really getting in the way. Can we put it somewhere else?”

“She hasn’t been the same since that whole Brad Pitt thing.”

Almost all of the examples we’ve looked at can also work with “stuff” instead of “thing.”

What’s the difference between “thing” and “stuff”?

There are three things to keep in mind:

1. If you’re talking about one thing, then just use “thing.”

“Can we put another thing by the window?”

“We need to pick up some more things for the garden.”

“We need to pick up some more stuff for the garden.”

“When he came out of the river, he was covered in this green slimy stuff.”

Now for the fun part.

Instead of just “thing,” we can also use:

(These words are going to come up a lot of times, so when I’m talking about them, I’m just going to refer to them as “thingamajig, etc.”)

But there’s a difference between “thing” and “thingamajig, etc.”

We can use the word “thing” when we’re too lazy to recall the actual word for something:

“I can’t stand these military things. They just make the soldiers walk up and down and do silly walks in uniform.”

… we can use it when we don’t know the actual word for something:

“He’s started working for a sort of hippy thing. It’s not a business … but it is a business.”

… and we can use it when the actual word for something just sounds too technical:

“He looks like he’s seen a lot of things in his life.”

But with these more fun words — “thingamajig, etc.” — we only really use them to show we don’t know the word for something.

It’s like we’re even drawing attention to the fact that we don’t know what something is — that the object is so strange that we get to use a ridiculous and colourful word.

Essentially we’re saying, “Look at this thing! Isn’t it interesting?” or even “Oh why is there such an unnecessarily specific thing in this world! I’m not going to learn the word for it!” — all with one word.

By the way, we only use “thingamajig, etc.” in place of countable nouns. So you can’t say, for example, “When he came out of the river, he was covered in .”

“It’s one of those thingamajigs that tells you the time with water.”

“Can you pass me that whatzit?”

“I didn’t really understand the problem. He said that the thingamabob in the boiler had burned out.”

“OK. See that white, plastic whatchamacallit? The one by the red button. Can you push it?”

So, like “thingamajig, etc.,” we use “thingy” when we want to say, “I don’t know the exact word for this thing.”

But with “thingy,” we always use it after another word — one that is as close to the word we’re looking for as we can get.

So if we want to talk about a machine that catches spiders with electricity, we might call it an electric spider catching thingy.

Or if we’ve been to an event that was a strange combination of a corporate conference and a karaoke session, we might call it the karaoke conference thingy.

“He’s started a new website thingy. You’ll have to ask him how it works because I have no idea.”

“Dinner was delicious! They served these amazing white chocolate thingies with edible paper.”

“Look what I found in the street! It’s one of those Pez thingies from the ’90s.”

OK. So we’ve talked a lot about things — objects, machines, events and so on.

But what about people?

So, when you’re talking about something and you need to mention someone, but you don’t remember their name, what do you do?

Well, you could just describe them, but that might sound a little strange if you just do that in the middle of your story: 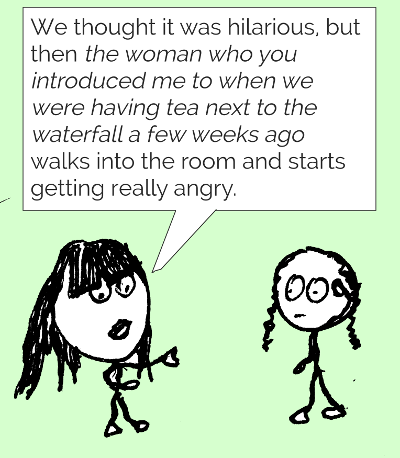 See what happened there?

The whole rhythm of the story was completely destroyed by that long, tricky description.

So, when we forget someone’s name in the middle of a conversation or a story, we can use “whatshername” to signal to the listener that we’re about to take a brief sidestep to identify the person we’re talking about.

The strategy is simple.

First, replace the name of the person with “whatshername”: 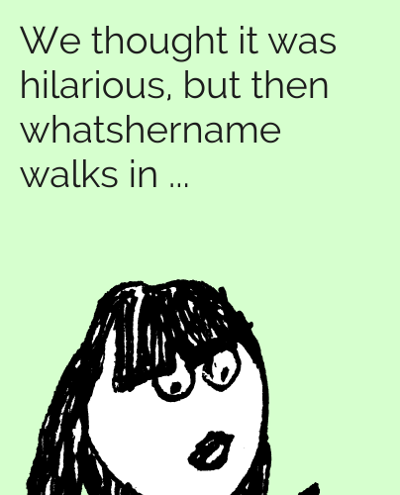 This sends a signal saying, “OK. I’m going to ask you about this woman in a second. Try to remember!” 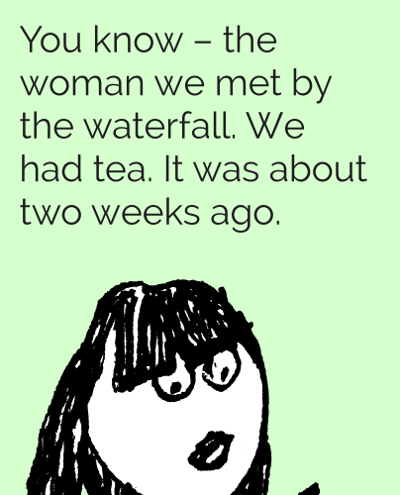 This way, you can give small pieces of information to the person you’re speaking to until you see that they know who you’re talking about. 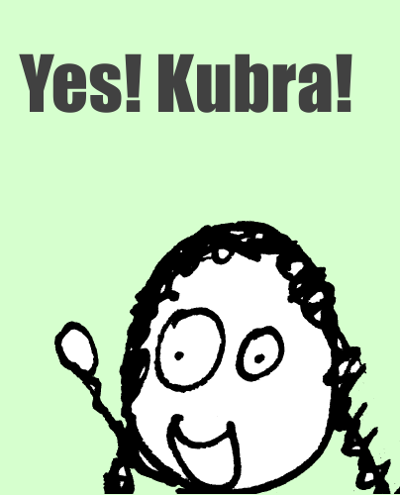 Then when that happens, you can continue with the story: 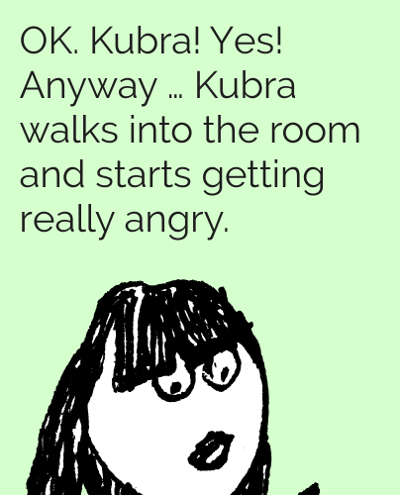 You can, of course, also use it with “his” or “their”: “whatshisname” and “whatstheirname.”

“You won’t believe who I saw yesterday. Whatstheirname … you know — from the corner shop. With the hair!”

Or you can also use it for someone’s surname:

“Did you hear about Barry Whatshisname? The famous wrestler? Well — he’s been arrested!”

You can also use the word “whatshisface” or “whatsherface” — but be careful: although it’s very funny, it can sound a bit rude.

Some guy / Some bar

This is a super useful way you can use just one word to give out a complex signal.

In this case, the word is “some” and the signal is “Yeah, I’m not sure what or who it is, but it’s something or someone and frankly, I don’t care that much.”

As you know from those terribly exciting English lessons you had at school (good times, right?), we use “some” with plural or uncountable nouns in positive sentences and “any” in negative sentences with countable or blah blah blah.

So here’s the thing.

That isn’t actually true. (For details, here’s the blog post where I explain why.)

“Oh, you got a call while you were out — some guy from the furniture company or something. Don’t they have your mobile number?”

“I should’ve gone home after the restaurant. We all ended up at some bar somewhere in Taksim. We stayed there until sunrise. Bad idea.”

Well, when we use “some” with a singular noun, we give that signal — “I don’t know for sure what it is and I don’t really care.”

It’s not important, and it gives a dismissive feeling to what you’re describing.

We use “so-and-so” to refer to an unspecified person:

“Mum keeps me up to date with all the family news: so-and-so just got married; so-and-so graduated from university …”

Or an unspecified thing:

“I like to make pretty simple dinners: some rice, some vegetables and so-and-so all in one pot.”

But be careful: If you refer to someone as a so-and-so, it means you don’t like them. (“So-and-so” is used in place of a swear word.)

“Watch out for the Thrumptons at number 23 — They’re a right bunch of so-and-sos!”

There are some topics that we’re all sick of talking about.

Now, if you’re reading this in the future, like 2025, you’re hopefully living through a time when there isn’t a raging pandemic turning the world upside down.

If you are, then please tell me … What’s a restaurant? I keep reading about them in books.

Anyway, this pandemic — the one we’re all well and truly tired of talking about?

Well, I don’t want to mention it. Because, like everyone, it’s a topic I’m fed up with.

So, if I need to bring it up in conversation, I can use this phrase: “you-know-what.”

So I might say something like, “Yeah, their world tour was cancelled for the second time because of you-know-what.”

You can also change this phrase to “you-know-who.”

“It’s been about five years since they split up, but she’s still getting emails from you-know-who.”

Umpteen / A gazillion / A squillion

Think of how many emails you get in your inbox every day.

Or what about how many dollars Zuckerberg makes on a daily … no … hourly basis?

Or what about how many stars there are in the sky?

But how many are there?

And I mean A LOT.

It basically means “so many that my head hurts from thinking about it.”

If you’re talking about a smaller number — but a number that’s still much bigger than you think it should be — go for “umpteen”:

“No! Not Madagascar again! We must’ve watched this umpteen times already! Please choose something else! Anything!”

We can also use these as ordinal numbers:

“For the umpteenth time: stop changing my home screen! I’m not interested in vintage pianos.”

“He’s doing another webinar? That’s the gazillionth one this week!”

I don’t need to point out that these are made up numbers, right?

Great stuff! You got to the end of this blog post thingy.

But don’t leave just yet!

Why not practice your knowledge by answering some fun questions?

If you leave your answers in the comments, I’ll reply to them:

Looking forward to reading your comments!

3 thoughts on “Placeholder Names: Whatshername, Thingamajig, So-and-So and Other Words for When You Don’t Know a Word”