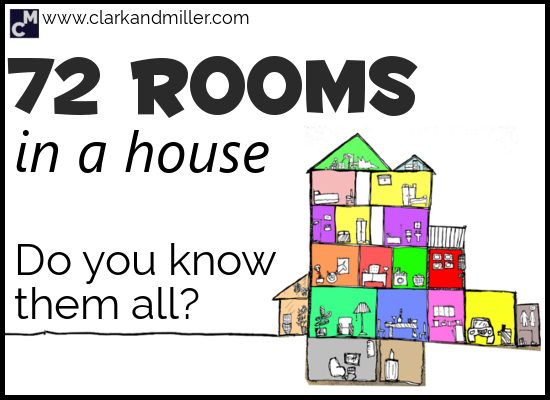 You’re about to learn the names of 72 different rooms in a house in English. While you’re here, check out Household Vocabulary: 48 Useful Objects You Don’t Know in English.

Can you name all the rooms in a house?

I mean ALL of them?

For example, do you know all the words for “living room”? How about the name for the small building in the back of the garden?

Then check out all the words for rooms in a house.

Rooms in a house 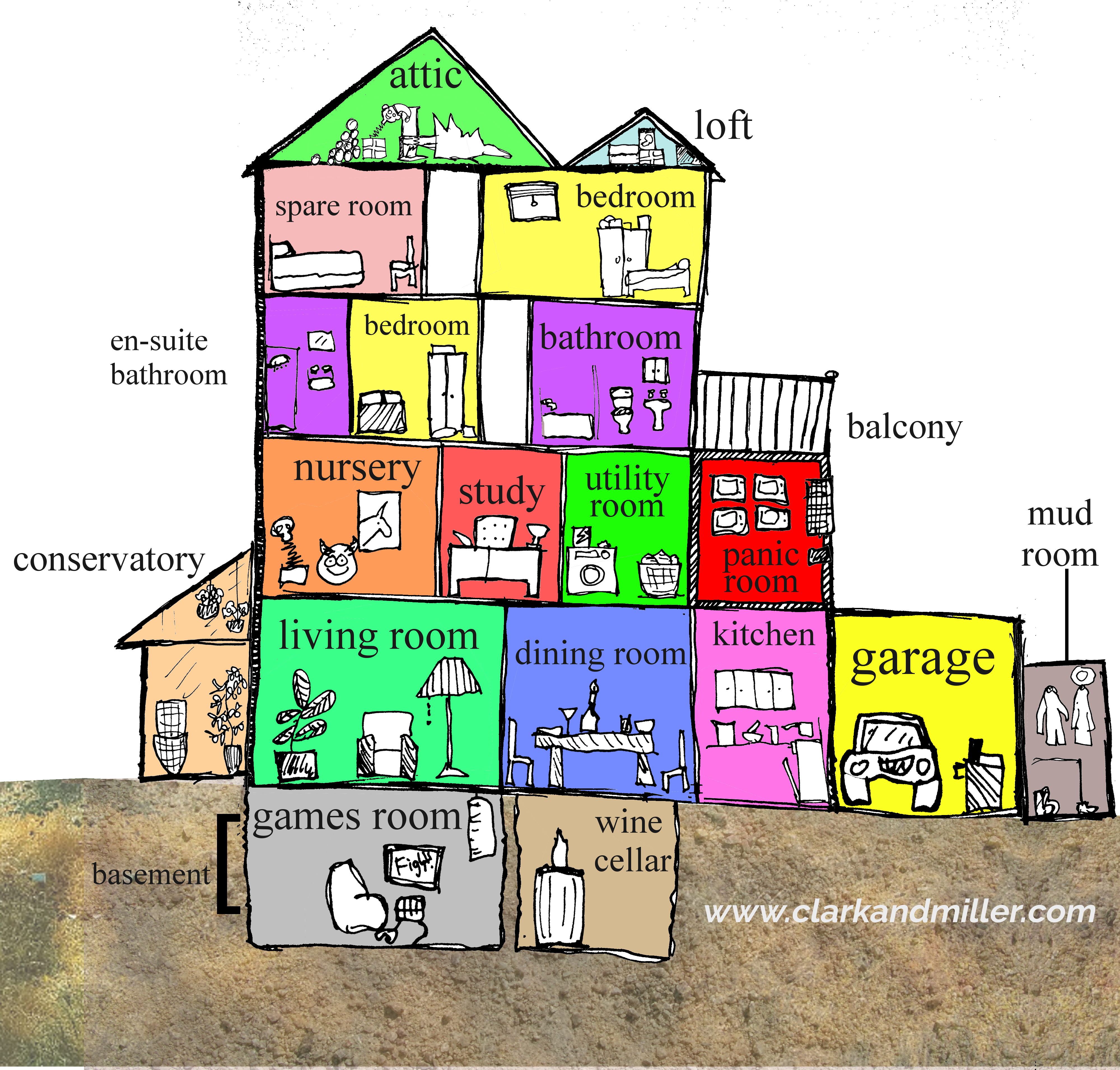 The top room in the house with a slanting ceiling.

Sometimes it’s used as a proper room, and sometimes you just use it to store stuff like your dad’s old Beatles records and that awful drawing of a cat that uncle Barry gave you for your birthday.

Very similar to an attic, except for two things:

Although these days, you sometimes see loft apartments for rent or sale. They’re basically attic apartments, but they probably think that “loft” sounds nicer.

It’s usually empty unless someone is visiting.

Do I really need to explain this one?

Where did you wake up this morning?

You probably woke up in your bedroom.

Or, if you’re on holiday, then you might’ve woken up in your hotel room or motel room.

But if you’re on holiday, then why are you reading this? Go to the beach, you maniac!

This is where you go to the toilet, have a bath or shower, brush your teeth, wash your face or stare at yourself in the mirror thinking about the meaning of life and wondering where on earth the time has gone.

If you’re lucky enough to have a bathroom attached to your bedroom — your own private bathroom — then that’s an en-suite bathroom (sometimes shortened to just “en-suite”).

If we want to sound posh in English, we usually just use French words. It gives the phrase a certain je ne sais quoi, which is French for something — I don’t know what.

If the room only contains a toilet and a sink, then we just call it the toilet.

You can also call it the lavatory, the lav, the loo or the W.C. (which stands for “water closet”).

There are also lots of words for public toilets — toilets in cafés, restaurants, libraries or just … in public:

You know this one, right?

A large balcony is called a terrace.

OK. I realise that you most probably don’t have an en-suite bathroom or a loft or an attic … or most of the rooms in this post.

And you’re even more unlikely to have a nursery — a room in the house that’s just for young kids to play in.

But they exist! They’re out there!

The room just for working in.

No TVs, no kids running around, no noises.

Just you and your work!

This room is also known as an office or work room.

If you’re an artistic type, and your work involves creating art or music, then this room would be called a studio instead.

If you’re a photographer, and you use your work room to develop your photos, then this will be the darkroom. Because it’s usually dark.

The boring room where all the boring stuff in the house happens.

It’s most often used for washing clothes, so it’ll have an ironing board, an iron, a washing machine and maybe a dryer.

In America they call it a laundry room, and in Australia it’s just “the laundry.”

OK, OK, I know — you don’t have one, and you’ve never met anyone who has one.

I’ve never met anyone who has one, either.

It’s a secret room where you can hide if someone breaks into your house or if the weather gets too extreme or if there’s a terrorist attack … that kind of thing.

Panic rooms usually have CCTV screens so you can see what’s going on inside your house while you hide as well as communication with the outside world so you can call the police.

A room with a glass roof (and usually glass walls) on the outside of a house.

It’s a nice place to sit outside, while still being inside.

You can also call it a sunroom or solarium in American English.

But be careful — a solarium is also a place where people go to get artificial ultraviolet light so they can get a tan.

It’s the main room in the house — the one where we usually hang out as a family or group of friends.

The one we spend most of our time in.

I guess because we spend so much time here, there are lots of words for it.

The most common words are now “living room” and “sitting room.”

“Lounge” is still popular, too, but these days it’s often used to refer to a room in a public building, like an airport (think V.I.P. lounge).

“Drawing room,” “parlour” and “family room” are also possible, but, as you can see from this image, they’re not so popular anymore:

You can also see that “parlour” used to be much more popular. We still have the phrase “parlour games” — games played in groups (like families) that don’t involve moving around very much.

Some houses still have a separate room for eating in. That’s a dining room.

These days everything’s a bit more open plan, and the dining room, kitchen and living room are often all in the same space.

Where you make food!

If you live in a small flat, and your kitchen is very, very small, you would call it a kitchenette.

A lot of flats these days have American kitchens or open kitchens — kitchens that are also part of the living room.

I like them! You can make dinner and still hang out with everyone.

In very old houses, you might find a scullery — a small room behind the kitchen where all the washing up and dish cleaning gets done.

Some houses also have a pantry or larder. These are rooms used to store food.

A room for the car.

But a garage is way cooler without a car!

You can build computers or play Dungeon Master or turn it into a music studio or even a gym. Such a better use of space!

Here’s a song about that (with the words).

Some houses have a mud room or entryway.

It’s a small area between the outside and the inside where you can take off your shoes and jacket.

Anything below the ground floor is called the basement.

That’s all you need to know!

Also known as a rec room (short for recreation room), this is the room where you can play games!

Some houses and flats also have a small room, often in the basement, in the attic or out in the garden, where you can go and relax and get away from it all.

This room is sometimes called a den.

What? You don’t have a small, unheated room with stone walls under your house where you keep all your wine?

What kind of person are you?

If there’s no wine there, it’s just called a cellar.

It’s a bit different from a basement room because it doesn’t have heating, the walls aren’t properly painted and there might be no electricity.

The long room that leads to the other rooms.

A wardrobe, or “closet” in American English, is like a cupboard.

Most are too small to walk into, so they’re not really rooms.

But some people have one:

A small, wooden one-room building in the garden.

But the author Roald Dahl decided he’d use his to write in.

A balcony is always higher up than the ground floor.

But some houses have a balcony or terrace on the ground floor.

This is a porch or verandah.

The room where all the books are.

A house in a tree!

Usually a place for kids to hang out in and read comics and eat candy.

A tree house on the ground isn’t called a ground house, though.

It’s called a cubby house (in Australia), Wendy house (in the UK), clubhouse, fort or playhouse.

A single-room building made of glass that you use to grow tomatoes and other plants in.

But I bet I missed something.

The rooms in a house can be different in different cultures.

Do houses in your country have a room that I didn’t include?

Tell me about it in the comments.