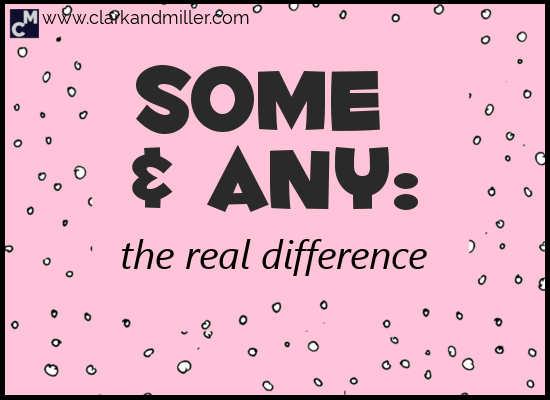 OK, I know what you’re going to say.

“Some and any? We did this at school! This is easy stuff.”

That’s true. But what did they teach you at school?

But we break this rule all the time.

(“any” in a positive sentence)

(“some” in a negative sentence)

When learners ask about this, I’ve heard some teachers (including myself) say, “Oh, these are exceptions to the rule.”

But these exceptions actually happen all the time.

So this isn’t a very useful rule, is it?

What’s the real rule, then?

Some and any: The general rule

The difference between “some” and “any” is actually pretty simple:

Take a look at this image. Let’s say these little circles each represent a metal band. 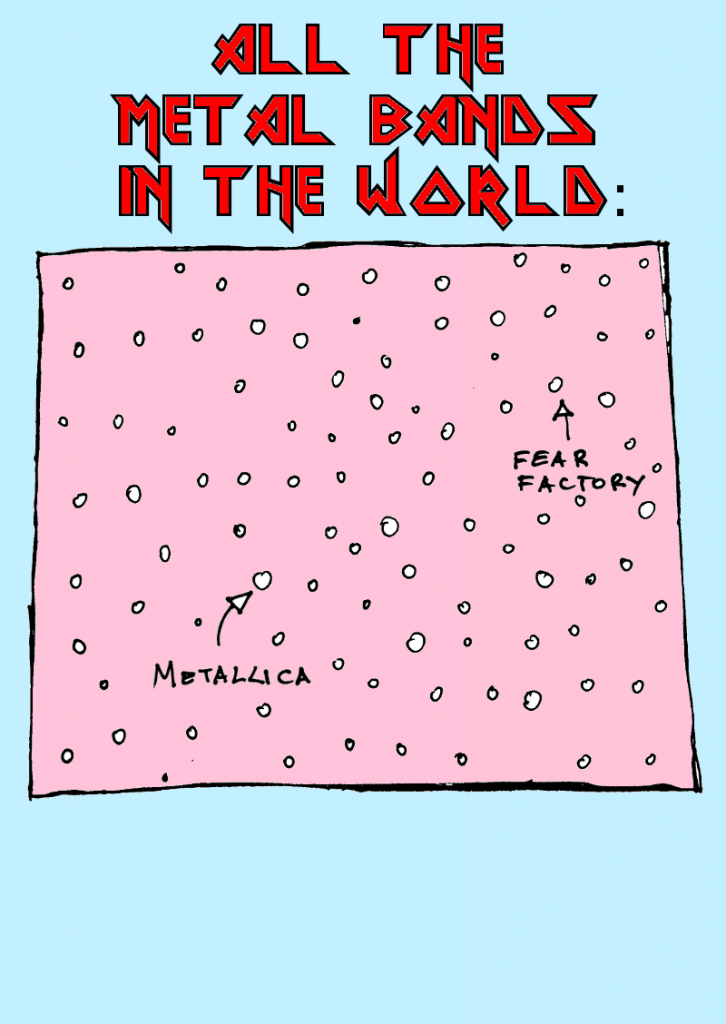 These are ALL the metal bands in the world.

Keep that image in mind. We’ll come back to it in a moment.

Now check out these sentences:

These sentences are very similar, but they all have slightly different meanings.

Let’s see how that looks with the circles.

“Some” in a positive sentence 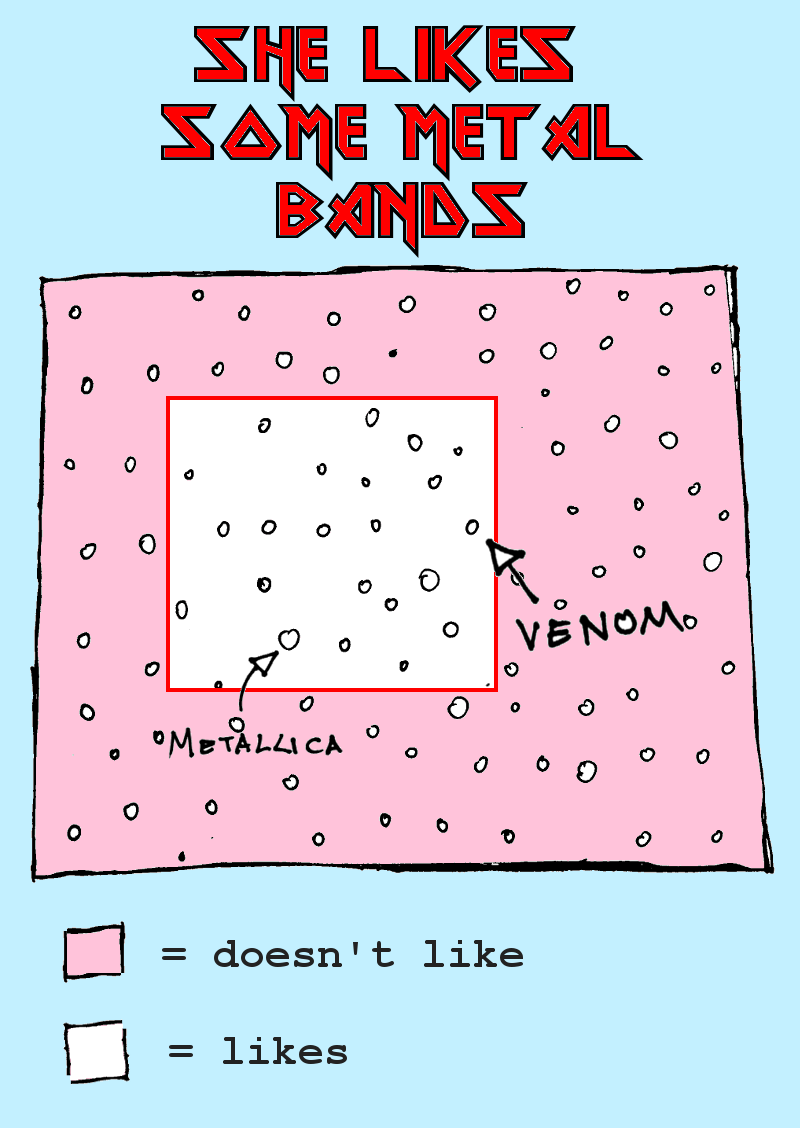 When we use “some,” we’re talking about a limited selection of things (a number or amount) – but not everything.

So when you say, “She likes some metal bands,” there’s an understanding that she doesn’t like ALL metal bands – just Venom and Metallica and a few others.

“Any” in a positive sentence 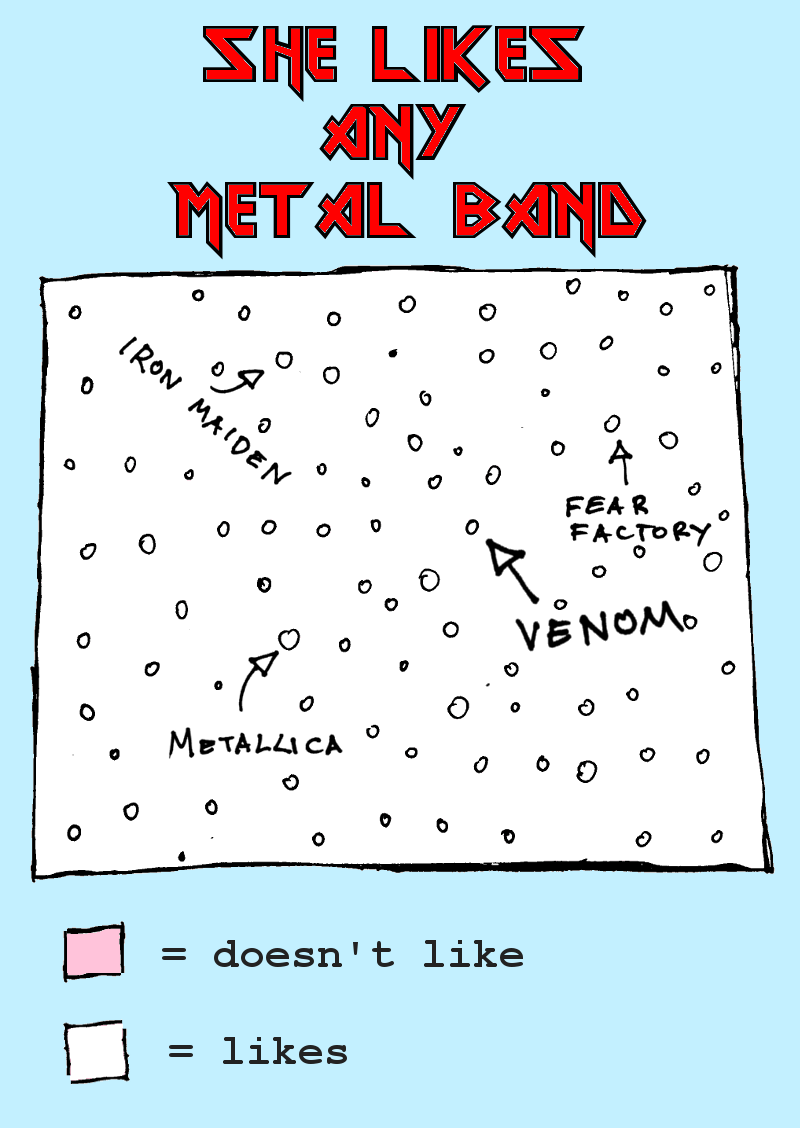 When we use “any” in this sentence, we’re basically saying “all.”

So using this would depend on context.

“I’m thinking of getting Michaela an album for her birthday. I know she likes heavy music, but what should I get her?”
“Oh, it doesn’t matter. She’ll be happy with something by any metal band.”

With “any,” there’s more of a feeling of “It doesn’t make a big difference which one we choose.”

“Some” in a negative sentence 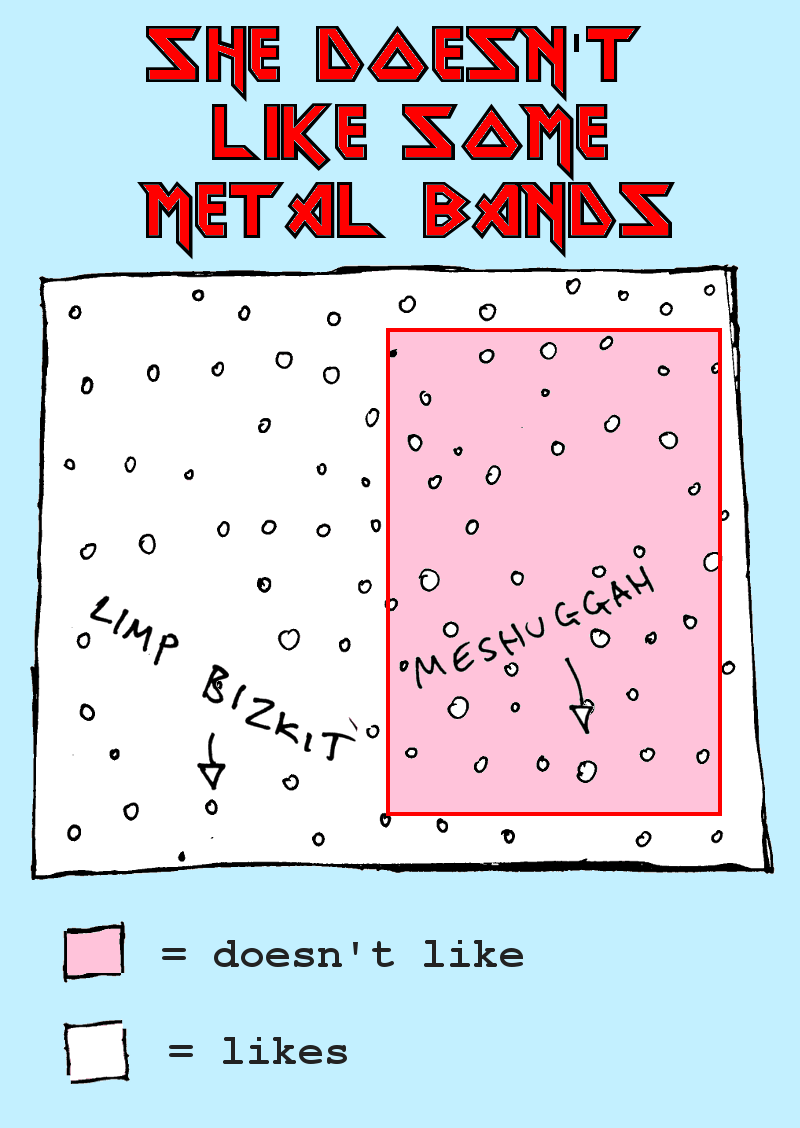 This is very similar to the first example.

When you say, “She likes some metal bands,” you’re saying that there are metal bands that she likes, but you’re also implying that she doesn’t like some others.

So be careful when buying her an album for her birthday.

If you get her Limp Bizkit’s latest album, she’ll love you forever.

But if you buy her a Meshuggah album … she’ll kill you!

“Any” in a negative sentence 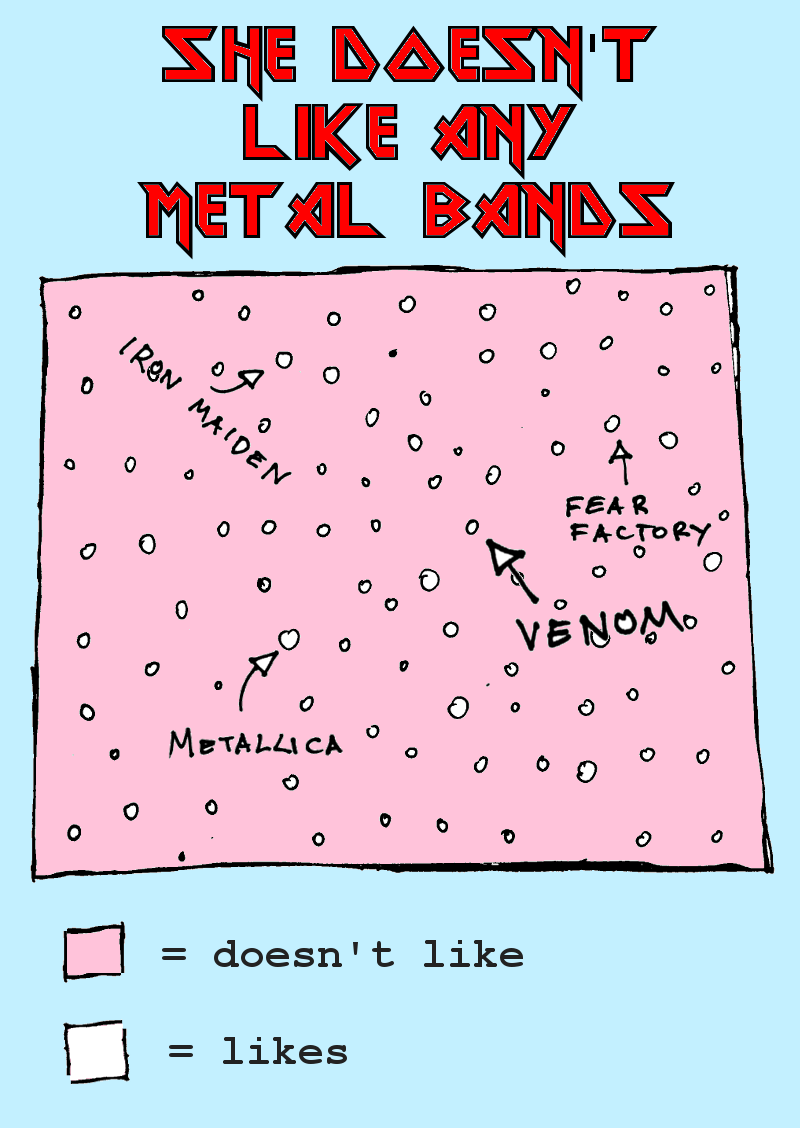 Again, this is similar to using “any” in a positive sentence.

When you say, “She likes any metal band,” the message is “It doesn’t matter which one you choose, she’ll like it. You can’t go wrong with metal and Michaela!”

But when you say, “She doesn’t like any metal bands,” the message is “It doesn’t matter which one you choose, she won’t like it. Metal and Michaela don’t mix! Get her some dream pop instead.”

Some and any: other uses

We’ve covered the basics of “some” and “any.” Now, let’s take a look at some other ways we can use these dynamic words.

Using “some” to add emphasis

Let’s use a flowers example here, because everyone loves flowers, right?

OK. So, this is very neutral. He bought some flowers – the number of flowers isn’t important.

But what if you wanted to give another message?

Something like, “Well … I got some flowers, but I’m not sure that there are enough.”

Then you can stress the one word in that sentence that has the feeling of limitation: “some.”

This is all done with your voice, so make sure you listen to the example above. 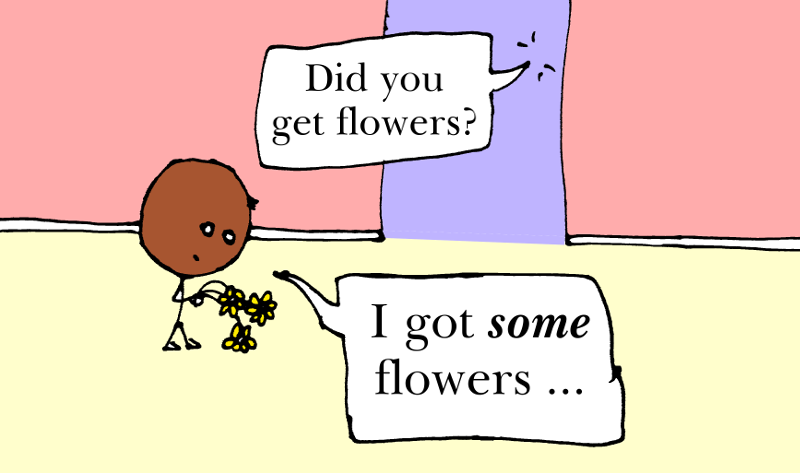 Using “some” for pieces of things

Let’s talk about the next best thing: bananas.

Think about the differences between these sentences:

Which sentence goes with which image? 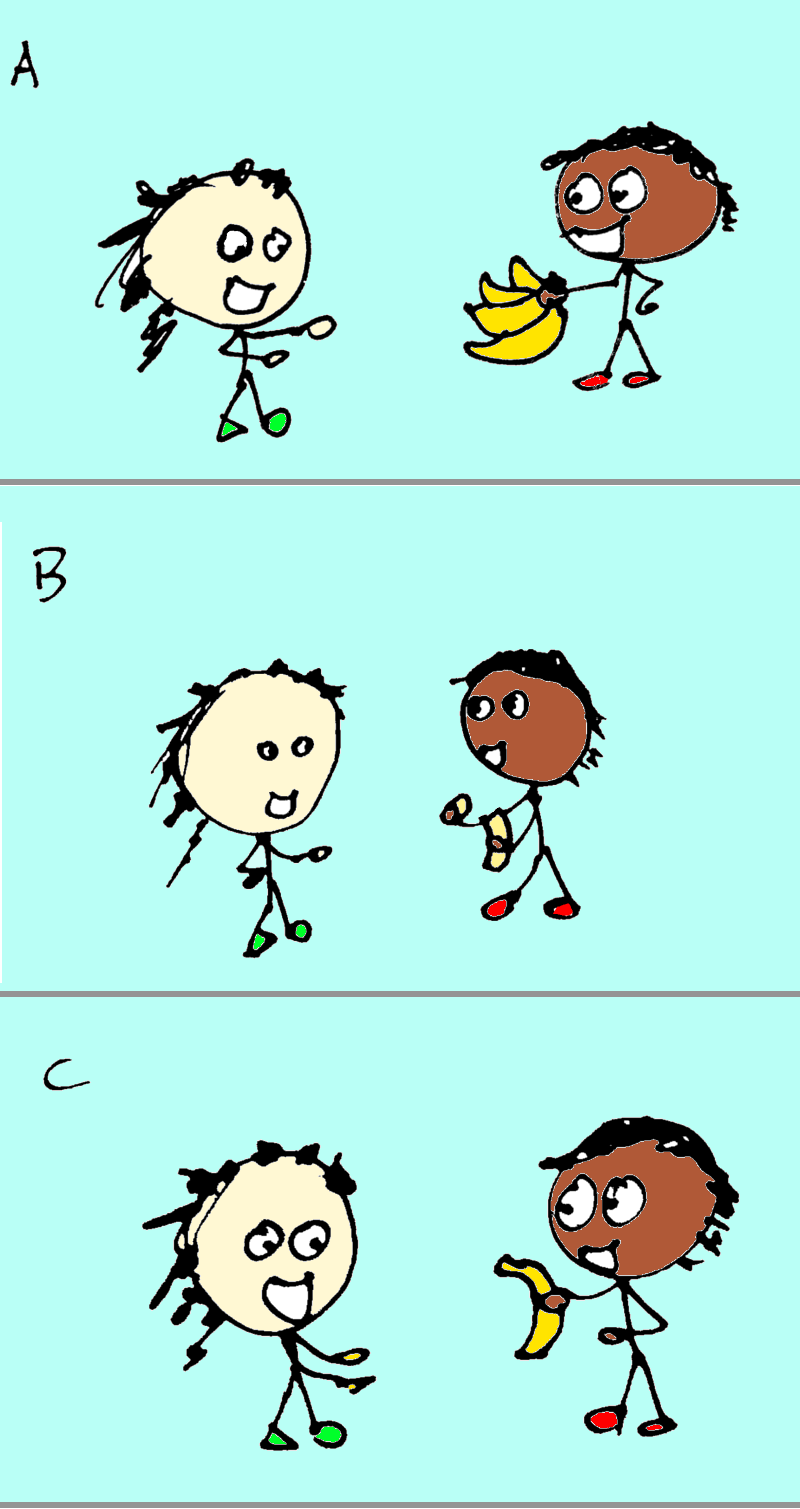 But here’s where things get interesting.

If you change “some bananas” to “some banana,” you’re now offering a piece of banana (image B).

“Some” + singular something = a piece of something

In a way, “some” has become even more limited.

Let’s take a look at another example, this time with cakes.

Some cakes, like cupcakes, are small, so you’d probably eat them one at a time.

Other cakes, like birthday cakes, are big, so you’d probably only have a part of it at a time. 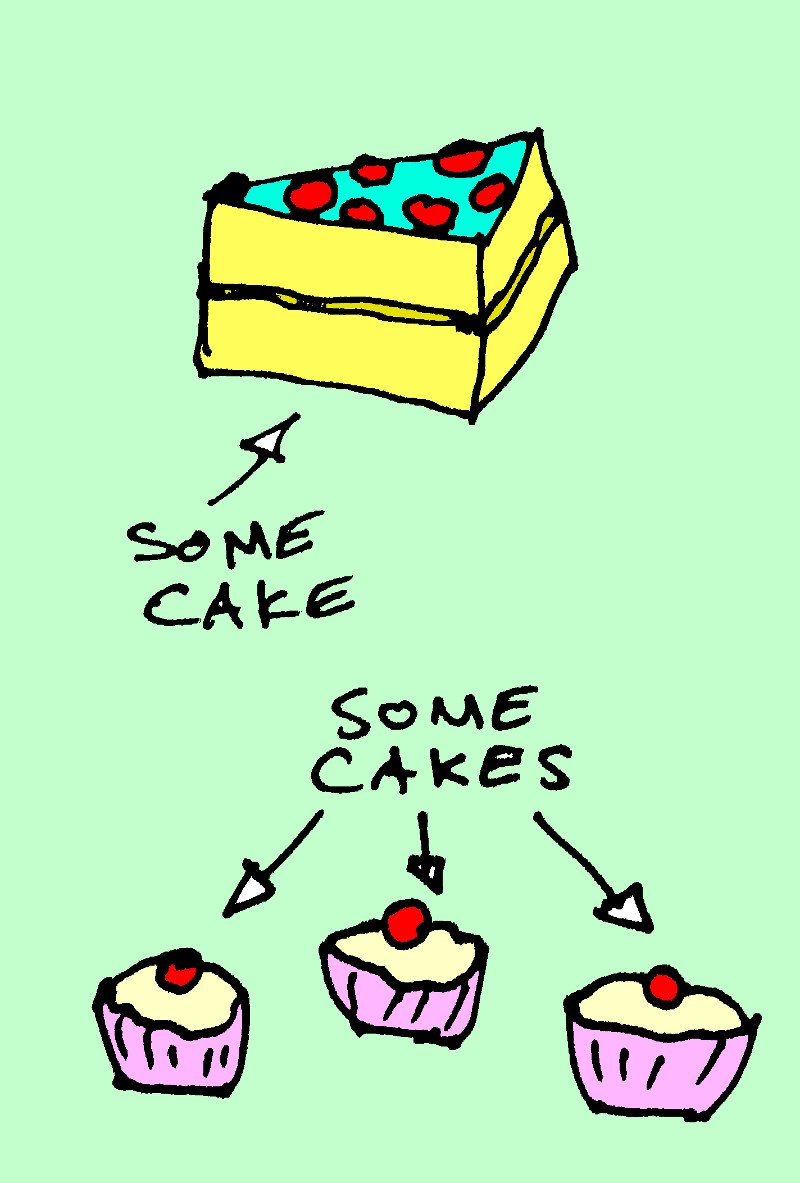 Using “some” to express not caring

This is one of my favourite ways you can use “some” to express how you feel.

We’ve just seen how we can use “some” + singular noun to talk about parts of something (pieces of banana or cake, for example).

We can also use the same structure (“some” + singular noun), to show that we don’t care so much about what we’re referring to – in other words, to be dismissive about something.

Let’s look at these examples.

OK. This is pretty neutral. And the message is clear: She was talking to a guy, but I don’t know who it was.

The message is clear here, too: She was talking to a guy, but I don’t know AND DON’T REALLY CARE who it was.

“Karim? Oh, he just spends all day listening to hip hop and playing some computer game or another. I’ve given up on him, to be honest.”

Using “any” to express limitless possibility

Let’s start with some examples:

Something like, “There’s no limit to what he’ll eat … even insects and stuff. I’d keep an eye on your cat while he’s around if I were you. Just saying.”

When you use “any” in a positive sentence, you’re really expressing the limitless nature of what you’re talking about.

“Shall we go to the Syrian, Lebanese or Greek restaurant?”
“Any of them, really. As long as there’s hummus.”

OK! Hopefully, you now understand the many differences between “some” and “any” and the ways that we use them.

Before we finish, how about some questions:

7 thoughts on “Some and Any: The Real Difference”