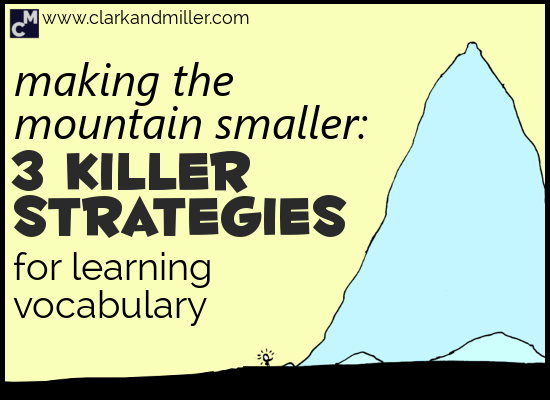 You might feel that learning English is a process that never ends.

Or that weird thing in Star Wars where you get digested alive for over 1,000 years: 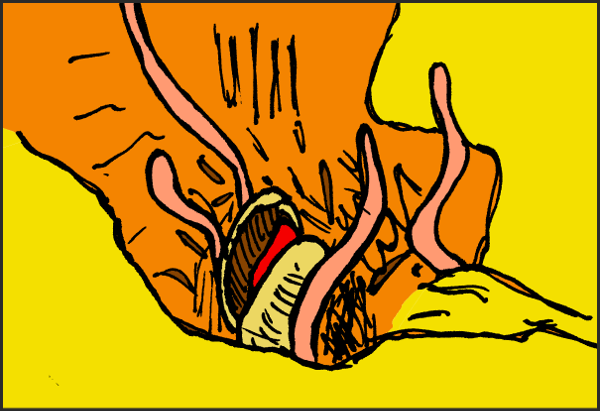 As usual, this is where I give you the “but there’s good news” bit.

It doesn’t have to be a nightmare. You can make life easier by making the process more manageable.

And you do that by knowing what you need to work on.

One way to do this is by imagining the whole of the English language as a gigantic pile of rice that you need to eat, one grain at a time … for some reason. 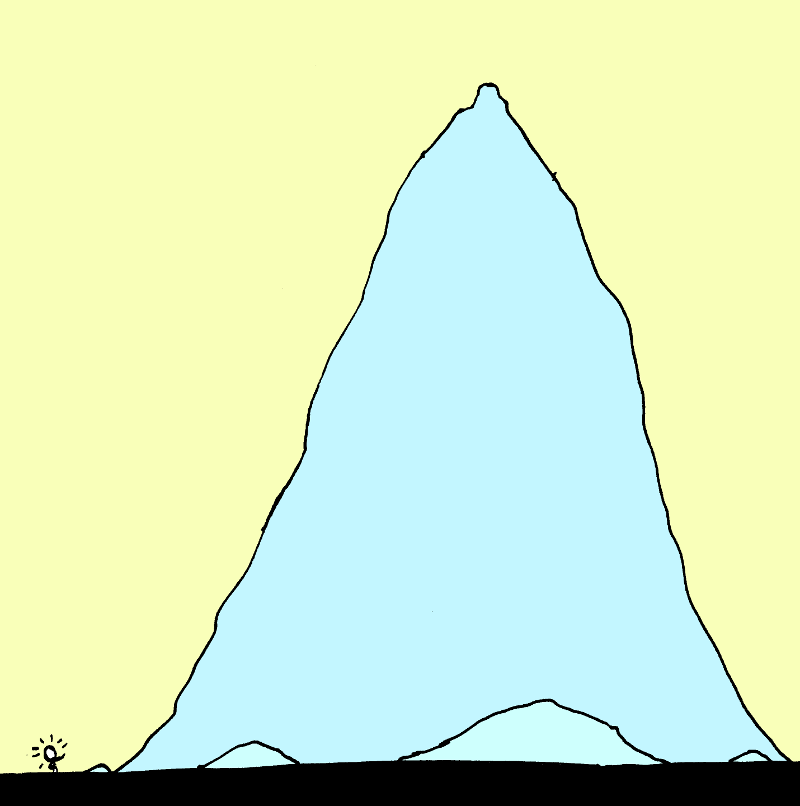 I guess this is more of a rice mountain.

Each rice grain represents an individual element of English — whether it’s how to pronounce “th” or how to use “used to.”

Anyone who sees this mountain is just going to look at it and say, “No … forget it.”

… and walk off and play Angry Birds or something.

But don’t play Angry Birds! At least not yet!

Most of this mountain of English vocabulary is unnecessary — and the rest is more manageable than you think.

This afternoon, I was listening to an interview on one of my favourite podcasts, Canguro English.

The interview was with David Crystal — one of the biggest heroes of linguistics, language and language learning.

In the podcast, David was talking about language and dividing it up into parts.

As he was speaking, I imagined the parts as piles of rice.

Here’s how it went: 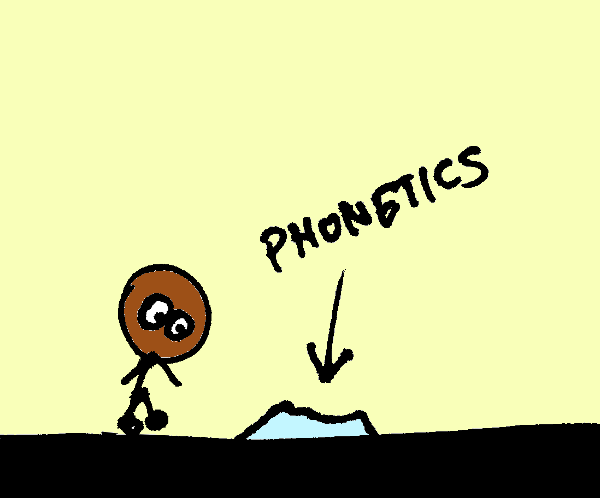 “If you’re learning English … there are forty, forty-four sounds that you have to learn. Well, that’s not a big deal, really.” 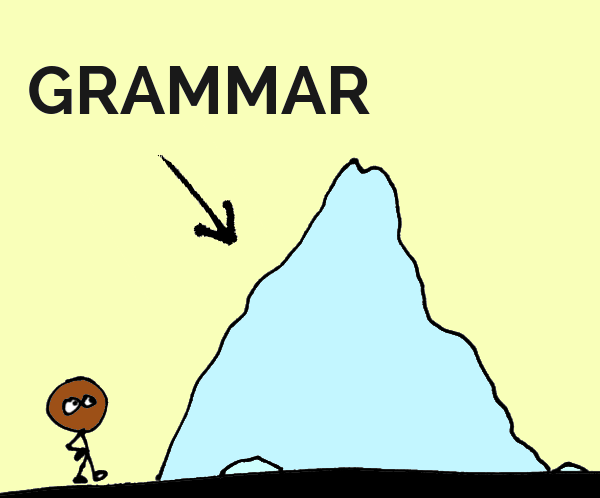 “… leaving aside some of the … forms of grammar you get in literary expression or very advanced scientific language, we’re only talking about … 3,500 of them … You can handle that over a period of four or five years.” 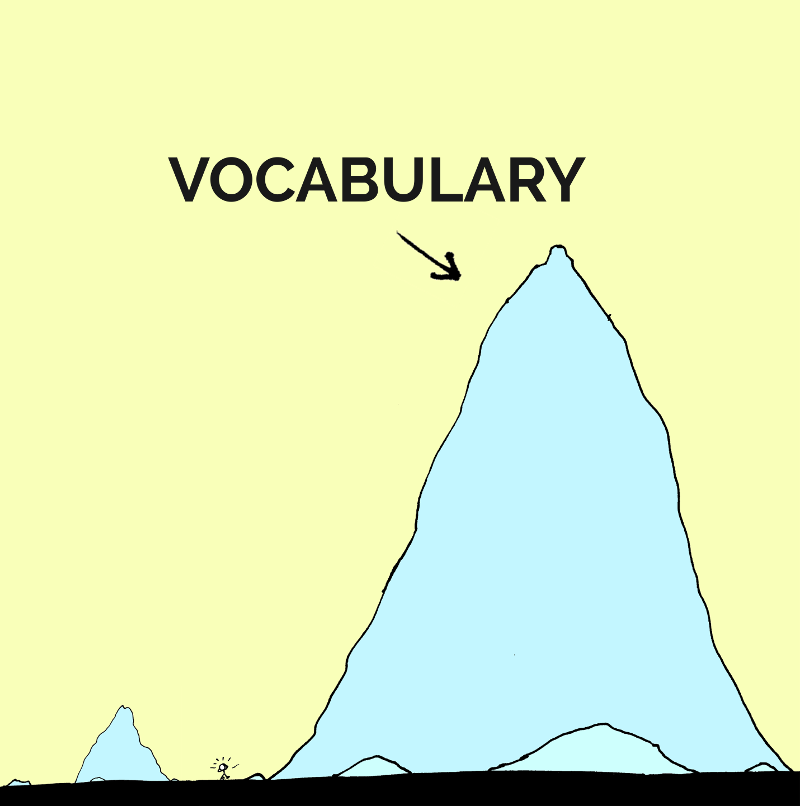 “But vocabulary … wow! Now we are talking about an Everest. How many words are there in the English language? Well … nobody knows. But at least a million.”

OK. So we see the problem, right?

Grammar and phonetics (sounds) don’t seem like such priorities anymore, do they?

But how can we deal with this mountain of vocabulary?

Some of the good news comes from David Crystal, but some of it comes from other areas.

And all of it can help you out with that mountain.

“But wait! What was all that stuff that you took away? Don’t we need that?” I can hear you ask.

If you want to include all the technical stuff (like 35,000 subspecies of spider and 900,000 types of insects), then we’re talking millions of words.

So let’s get rid of them.

There are also lots of obscure words that no one knows or uses anymore unless they’re trying to sound especially clever or if they’re playing some sort of sophisticated word game.

So we can get rid of those.

There are also the words that are only used by lawyers or train mechanics or the people who make your clothes.

So we can get rid of those, too.

So that’s a lot off the mountain already.

But we can make this even easier. 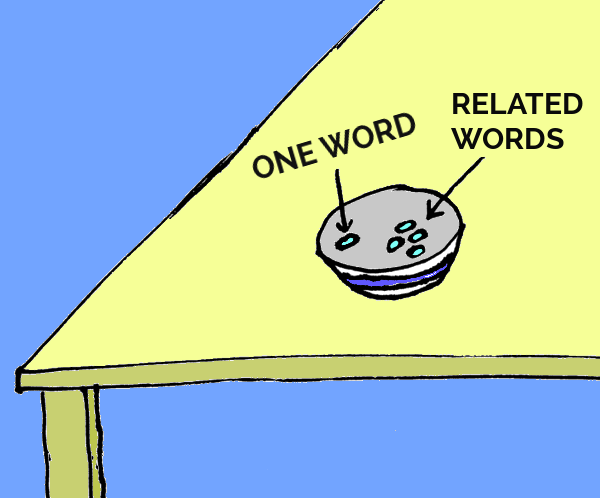 So we’ve got this much smaller — but still really big — hill of rice to deal with.

So we could just start eating each grain of rice one by one now, right?

Remember, each English word didn’t just come out of nowhere.

Words have other words that are related to them.

So instead of eating one grain of rice at a time, we can put the related grains together and have them all at once.

Some words have antonyms (words with the opposite meaning) — so when you learn the word “necessary,” you can also learn “unnecessary,” for example.

Words often have synonyms, too — words with the same meaning. “Necessary” is quite common, but so is “obligatory,” “compulsory” and “required.”

Finally, words often have other words related to them. So when you think of “necessary,” you also think of “permission,” “rules” and other related words.

When you’re learning, try to deal with new words in groups like this.

And you will have eaten more rice. 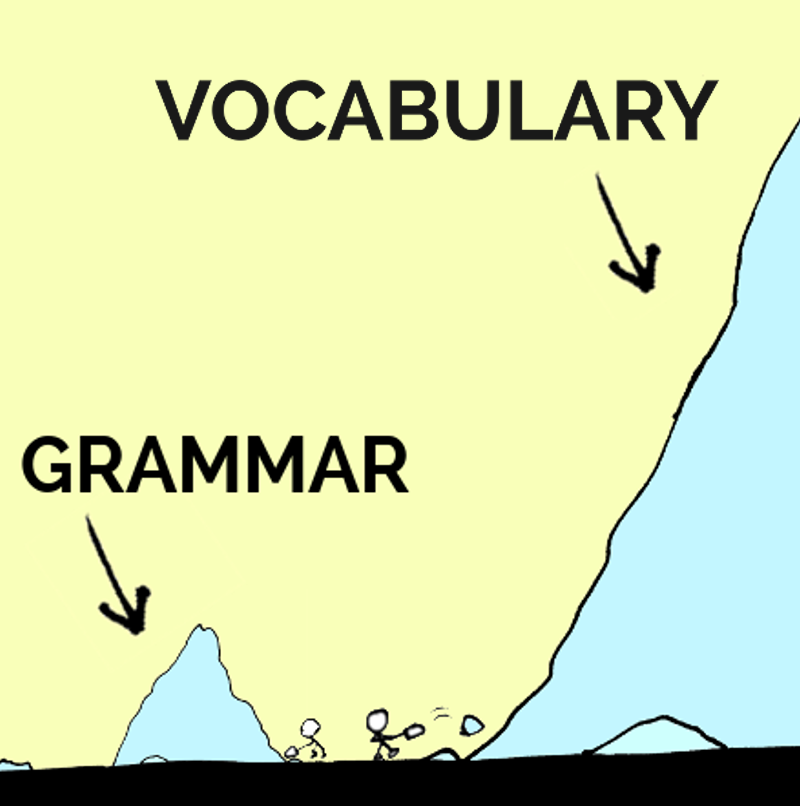 What! Are you crazy?! Why are you ADDING to the mountain? We just got it down!

This is the fun part.

Let’s say the grammar rice is really sticky, and it’ll stick to the vocabulary rice.

That’s because grammar is simply not a separate thing to vocabulary.

You can’t have grammar without words, right? 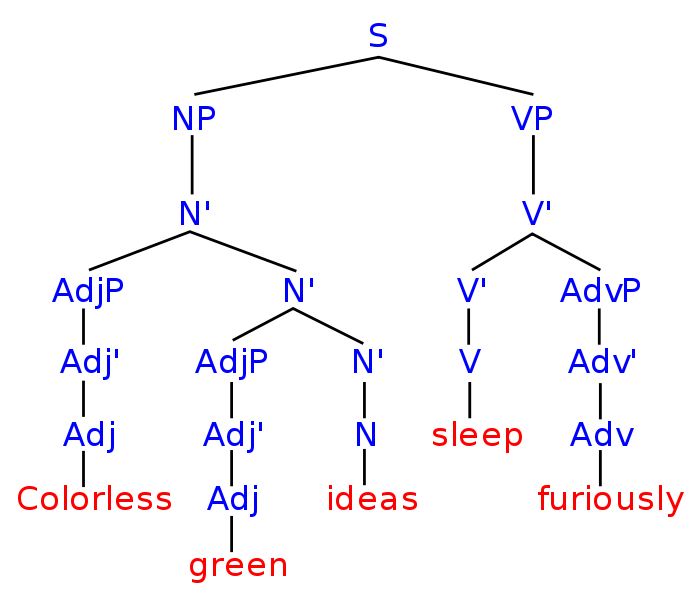 And you definitely don’t want to speak like that.

When you put the grammar rice into the vocab rice, then pull out some vocab, you’ll get a sort of clump of “vocabgrammar” (not a real word).

So how does this work with English (and not rice)?

Well, words don’t work in isolation — they always work with other words.

Let’s take a simple example. What’s wrong with this sentence?

“I want that he leaves the room now”

Well, I can’t tell why it’s grammatically wrong … because the grammar makes sense.

We tend to say:

“I want him to leave the room now.”

What about this one?

“I feel myself tired”

Grammatically it makes sense, but we just don’t say it.

We know what each of the words means one by one, and we know how the grammar works by itself.

Whenever you learn a new word (and its synonyms and antonyms and all the stuff I mentioned above), do one more thing.

See how the word often behaves in a sentence.

There are several ways you can do this.

One way is by using a tool such as the British National Corpus.

Click on the link above, search for your word, click on the word again, and you’ll see how it’s used in thousands and thousands of real-life examples.

Here’s an example with the word “worth.” 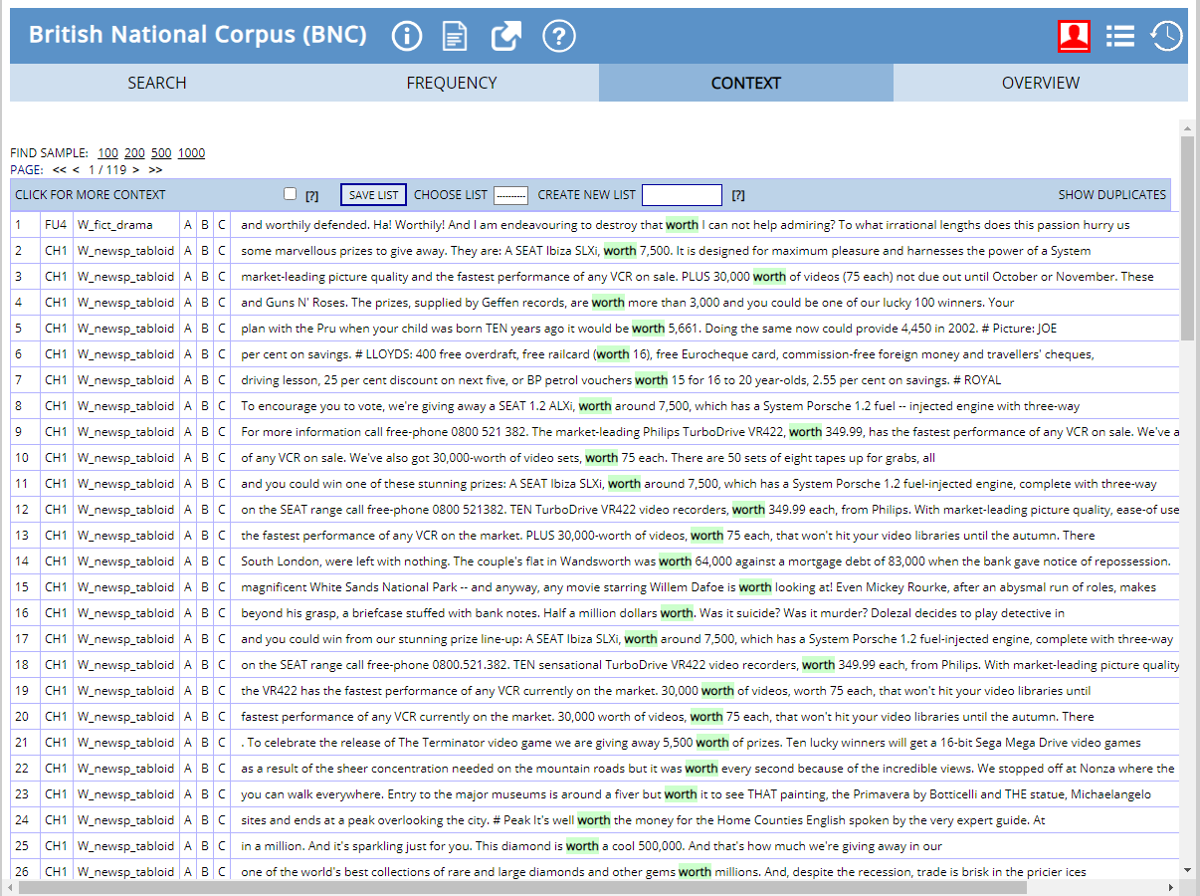 When you do this, you’re getting the grammar and vocabulary at once, working together at the same time.

But you don’t even need to go as far as using a corpus.

All you need to do is just notice.

When you come across a new word while reading, pay attention to how it’s used in the sentence.

When you come across a new word while speaking to someone, pay attention to how it’s used in the sentence.

Don’t just pull out the single word — get a nice clump of sticky rice (grammar) along with it.

Then you’ll be able to get that hill of rice down more quickly, AND you’ll be speaking more naturally and easily.

All that our language consists of, after all, is clumps of rice.

So I hope that now you feel a lot more positive about learning new vocabulary.

There’s still a lot out there, but now you know that you don’t need to learn all of it.

In fact, most educated English speakers only know about 50,000 words.

And now you know how to deal with the ones you do need to learn.