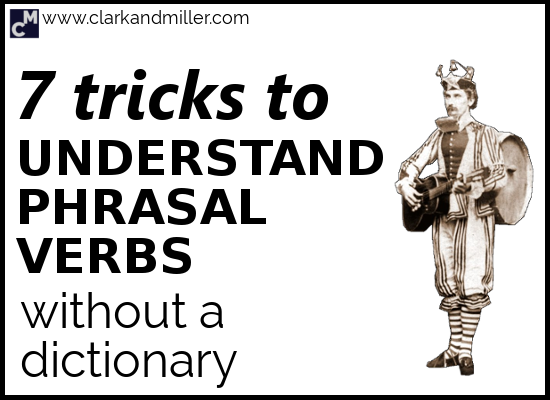 You’re about to learn how to understand the meaning of some phrasal verbs without looking them up! For more phrasal verbs, check out 25 Phrasal Verbs and Their “Normal” Equivalents.

Yeah, yeah — I know. Phrasal verbs can be a pain.

If only there was an easier way to learn them, right?

Well, here’s the bad news first: most of the time, there isn’t an easy way. Phrasal verbs are crazy!

You’ll also be able to understand a lot more of what people are saying in English and even understand phrasal verbs without a dictionary.

A world will open up to you!

1. How to understand “off” in phrasal verbs

“Off” can mean away.

I want to start this one with some unpleasant phrases.

That’s because, although these kinds of phrases are definitely not very nice, they’re easier to remember.

If you don’t like swearing or aggressive language, please look away now.

So here we go:

“Sod off*, will you? We asked you several times to leave us alone. We don’t want to buy your insurance!”

“Piss off*, man! I’m trying to balance these rocks. You’re not helping!”

*Be careful! These phrases are definitely not polite!

Eugh — not the nicest of expressions.

Phrasal verbs with “off” meaning “away”

Wander off = walk away without much direction or purpose
e.g.
“Where’s Todd?”
“I don’t know. He was here but just sort of … wandered off.”

Trail off = slowly get quieter and disappear
e.g.
“He started talking about the economy with such confidence but after a couple of minutes his voice sort of trailed off. He really doesn’t know what he’s talking about.”

Walk off = walk away
e.g.
“How rude! I was talking to him about my new kitchen extension, and he just walked off while I was still mid-sentence. Unbelievable!”

2. How to understand “down” in phrasal verbs

“Down” can mean “get smaller” or “become calmer.”

Let’s start with one you know for sure: 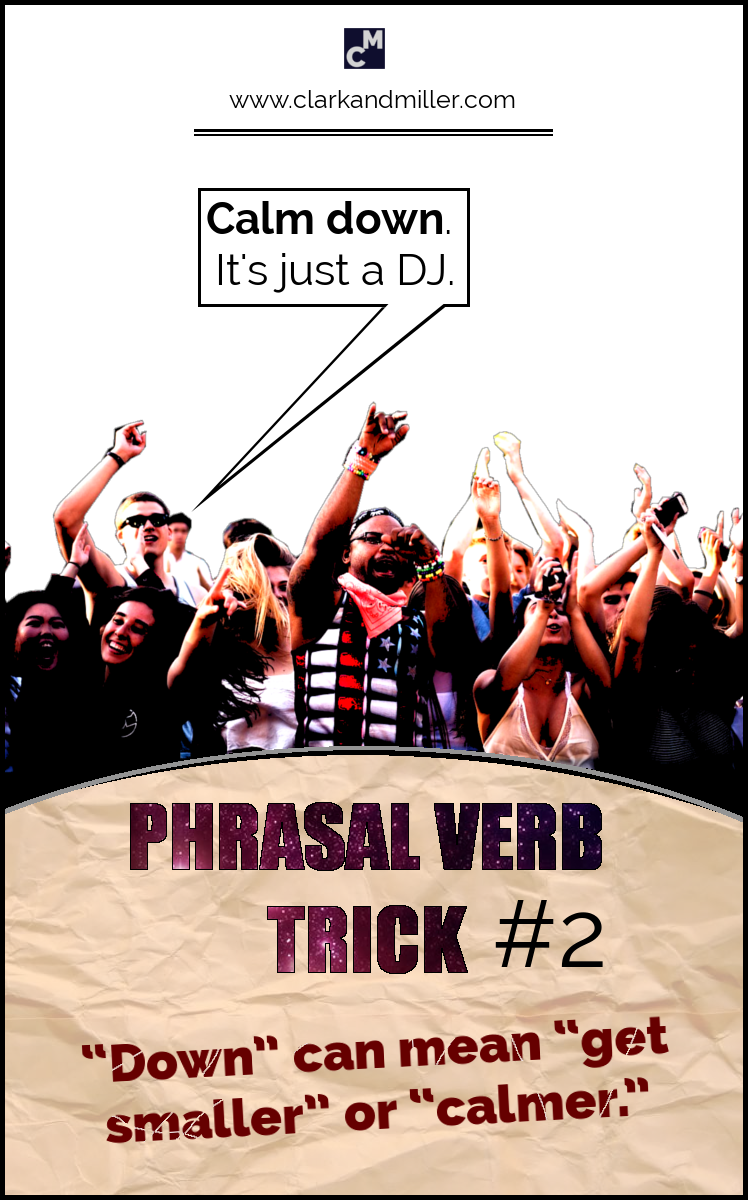 Notice that we say “calm down” and not just “calm.”

That’s because the word “down” can relax a situation.

It’s all about relaxing — about getting quieter, calmer, smaller and more relaxed.

“Down” is the relaxer!

Phrasal verbs with “down” meaning “get smaller/calmer”

Die down = for a sound or an activity to become quieter or calmer
e.g.
“We should wait for the rain to die down before we leave. What do you think?”

Settle down = calm down / get married, maybe have kids, get into the routine of life and stop being so spontaneous. Maybe also get a mortgage. That kind of thing.
e.g.
“OK kids, settle down, settle down!”
“I don’t think he’ll ever settle down. He’s just not that kind of guy.”

Grind down (to a halt) = gradually slow down and eventually stop
e.g.
“… then the funding stopped coming, and the whole project ground down to a halt. Building the wall was a stupid idea anyway.”

Play down = make something seem less important
e.g.
“The government did a really good job of playing down the scandal. No one talks about it anymore.”

3. How to understand “out” in phrasal verbs 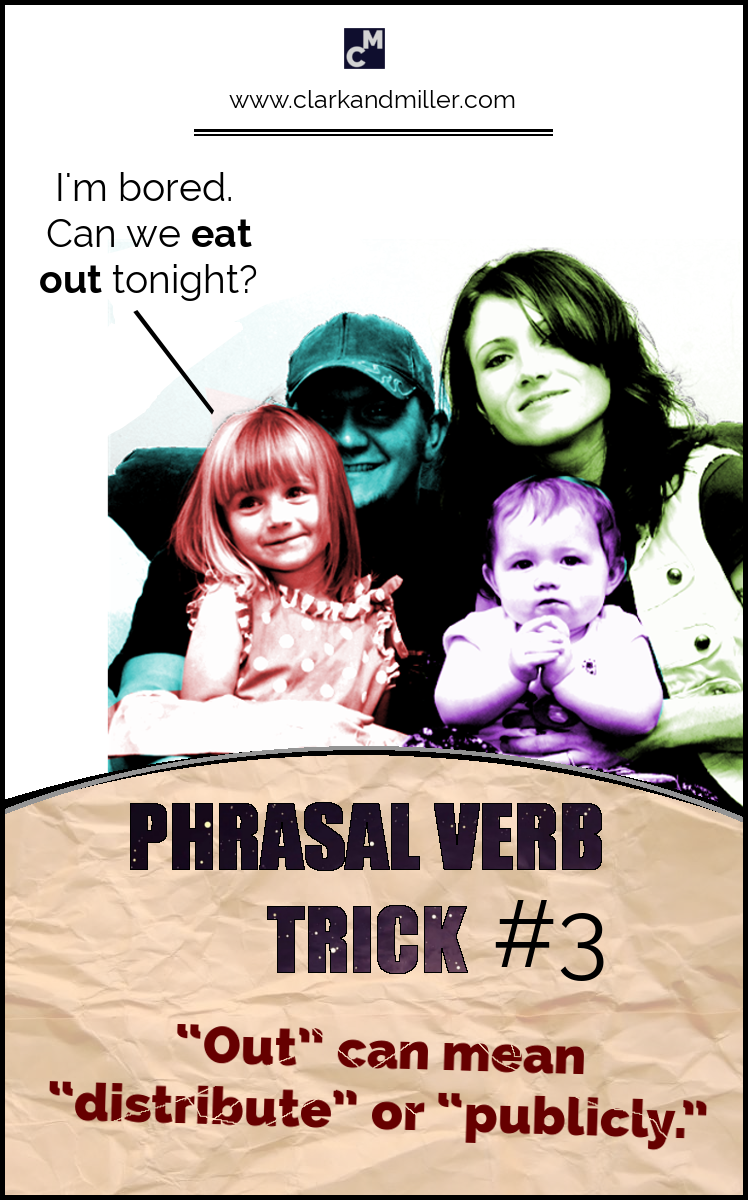 In this case, “out” has a direct meaning. It means “out of the house.”

So it can mean “publicly” or “out of the house.”

But we can also use “out” when we want to talk about lots of the same thing going to different people.

Like the way your teacher gives everyone in the class the same photocopy.

Or how after the factory makes the bikes, and the bikes then go to lots of different shops around the country.

In other words, it can mean “distribute.”

Phrasal verbs with “out” meaning “distribute” or “publicly”

Give out = give something to a lot of people
e.g.
“Oh no — them again! Wherever I go, they’re there giving out their leaflets about how the earth is flat.”

Hand out = give something to people in a particular group. This can be students in a classroom, people in the audience at the theatre or the people in your tennis team.
e.g.
“OK, before we hand out the prizes, let’s announce the winners!”

Speak out = give your opinion about something honestly and directly. This is usually for something that “needs to be said.” Perhaps it’s something that a lot of people aren’t talking about — stuff that people don’t want to talk about, like how the mafia is running the country or why the president keeps having all those secret meetings all the time.
e.g.
“I just want to take this opportunity to speak out against the ridiculous new idea for a flying cafe. Why are we spending all this money when there are people sleeping in the streets?”

Call someone out on something = tell someone that what they’re doing isn’t acceptable. Like when your uncle’s friend starts with the racist comments again. Or if you have a friend who’s drinking too much.
e.g.
“I’m really glad you called me out on that. I had no idea that winking was so offensive in this country.”

4. How to understand “up” in phrasal verbs

And what’s more complete than saying goodbye to a bad habit forever! And also to that awful hat.

(By the way, it’s been over a year and a half since I gave up smoking. Pretty awesome, yeah?)

Phrasal verbs with “up” meaning “completely” or “fully”

Lock up = lock a building securely so everyone can leave for the night and no one is going to break in and steal all the chairs. This is usually used for an office, a factory or another place of work.
e.g.
“Sami usually locks up, but he’s on holiday this week. Can you do it?”

Drink up = finish your drink
e.g.
“Come on — drink up! We’ll miss the beginning.”

Finish up = finish whatever it is that you’re doing. But really finish it. Completely. Until it’s finished. Really finished.
e.g.
“OK. Just give me a couple of minutes to finish up here, and I’ll be with you.”

Shut up = Stop talking! (Warning: very rude!)
e.g.
“Oh please shut up about the flat earth thing again. You’re making a fool out of yourself.”

5. How to understand “on” in phrasal verbs

There are a couple of ways we can use “on”; both of them have a feeling of continuing.

Sometimes it simply means “continue what you were doing.”

And sometimes it means “this person won’t stop, and I really want them to stop. But they just continue.” 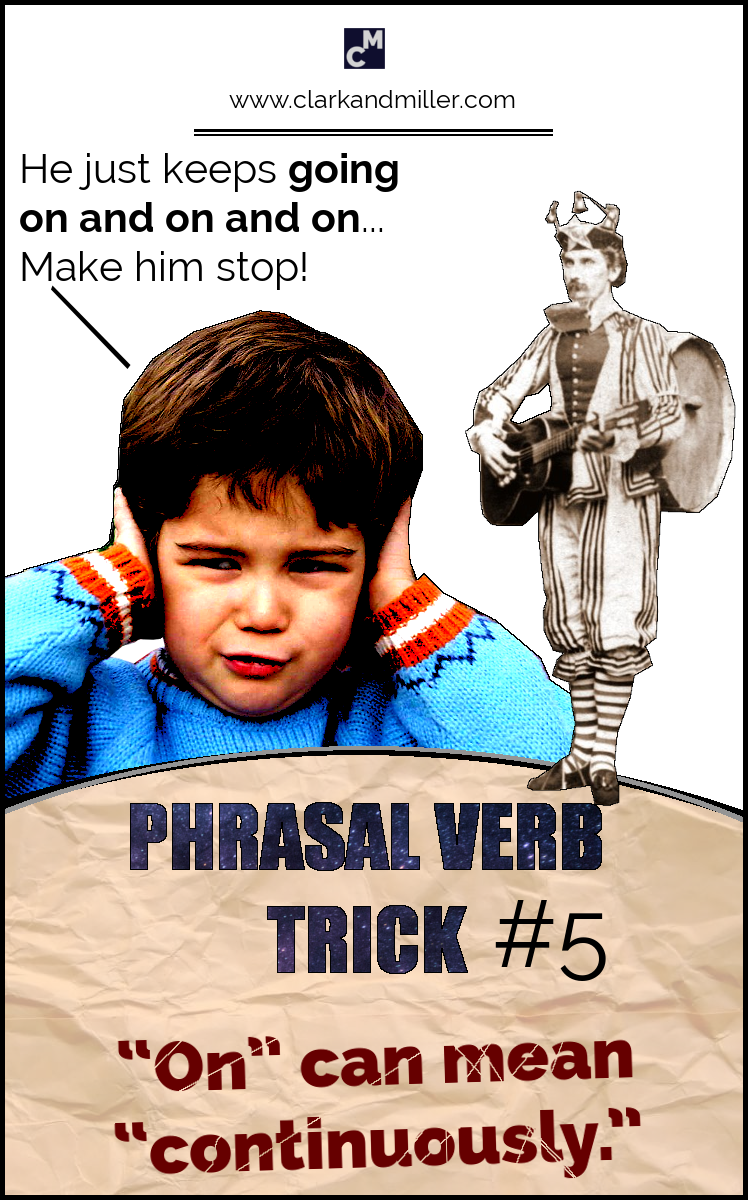 Phrasal verbs with “on” meaning “continuously”

Play on = keep playing
e.g.
“The ship was going down, but the band played on till the very end.”

Carry on = keep doing whatever you were doing before
e.g.
“The cops had already warned him, but he just carried on dancing in the fountain. Everyone loved it!”

Go on and on and on and on = Did you notice the repetition? We use this phrase when someone simply won’t stop talking, or something like a meeting or a terrible film just keeps going and doesn’t finish. Usually, it’s when we find it boring or annoying.
e.g.
“He could see that I was totally bored, but that didn’t stop him going on and on about his kitchen extension. I should’ve just walked off or something.”

Moan on = You know those people who love to complain? They just complain without stopping. Forever. This one’s for them.
e.g.
“Oh, I have no idea what he said. I stopped listening while he was moaning on and on about the trains.”

Move on = continue going where you were going before you stopped
e.g.
“Nothing to see here! Move on now…”

6. How to understand “around” in phrasal verbs

“Around” is an interesting word.

“Is there a good traditional musical sports shop around here?”

In these examples, “around” is used to mean “in this area.”

So “around” is not about going in a particular direction, like “off” or “on.” It’s about not really going anywhere at all.

That’s why “around” often has a feeling of pointlessness or purposelessness.

We use it when there’s not much of a reason for doing something.

This can be both positive or negative, as you’re about to discover.

Hang around = spend time somewhere but without really doing anything in particular. Think about bored teenagers in town. With nowhere to go, they just sort of hang around — looking cool and being unnecessarily noisy, usually.
e.g.
“Well, the film doesn’t start until 8. Let’s not hang around here … pub?”

Wait around = wait somewhere for something or someone to arrive, usually without a book or something to do. For those of you who know me well, you’ll know that this is my personal idea of hell.
e.g.
“When all the flights were cancelled because of the volcano, everyone was left waiting around at the airport.”

Lounge around = relax in a lazy way. Sometimes this is pretty good. Lounging around on the beach or by the pool is kind of normal. But sometimes it can be used to describe super-lazy people.
e.g.
“He just lounges around all day talking about how he’s going to make the first time-travelling bicycle. I think he smokes too much.”

Wander around = walk somewhere with no particular reason or destination. Just for the fun of walking in a particular place. Think about the high street on a Sunday afternoon.
e.g.
“The first thing I’d like to do when we arrive is just wander around town and get a feel for the place.”

7. How to understand “away” in phrasal verbs

“Away” is the preposition of freedom.

You know that feeling when you don’t care what other people think about you?

When you can just do something happily without worrying about doing it right.

Just doing something because it comes completely naturally.

The other day, for example, I was in the supermarket. There was a guy there who was clearly bored waiting for his girlfriend, who was looking at stuff. So he just started dancing away.

In the supermarket. That’s right! 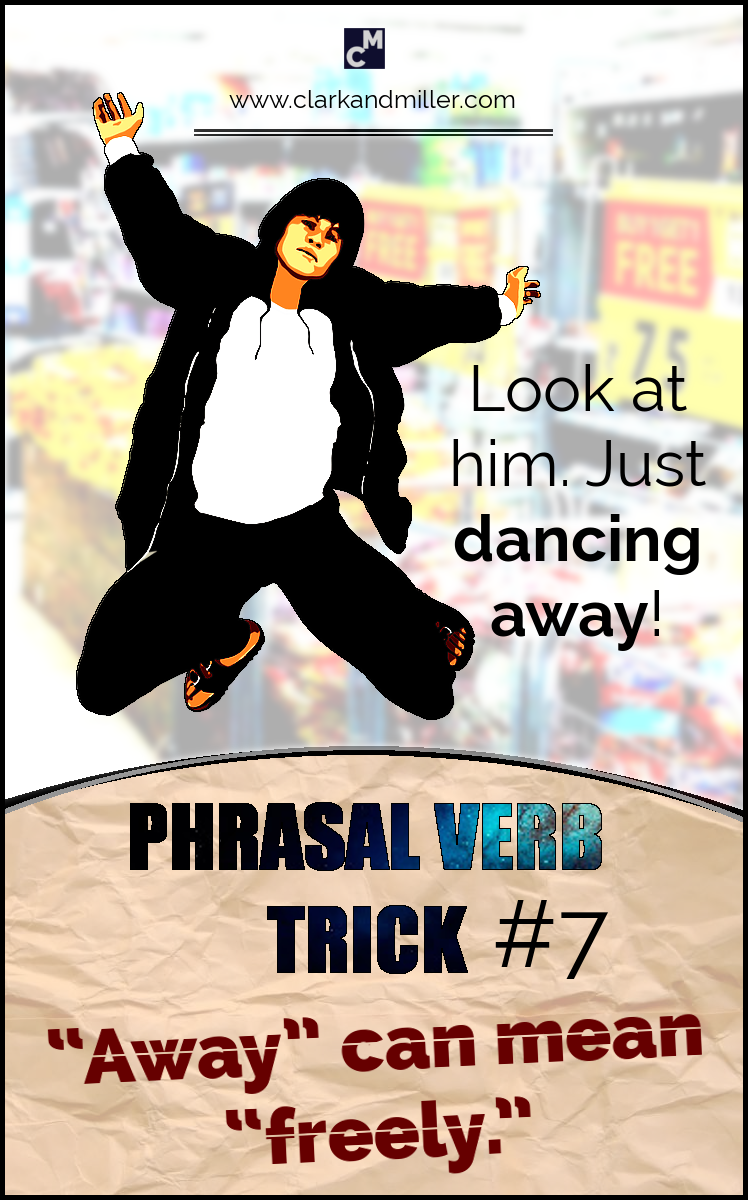 Phrasal verbs with “away” meaning “freely”

Chat away = Don’t you love it when you meet someone and you just “click” with them — you just become friends, and conversation with them is easy and effortless? That’s what this means!
e.g.
“When they first met a few minutes ago they didn’t know what to say to each other, but now they’re just chatting away.”

Smile away = when someone has that look on their face:

e.g.
“Look at you smiling away. Did you go elephant riding at midnight again last night? You did, didn’t you?”

In fact, you can add “away” to almost any verb, and it would have a similar meaning:
“The musicians played away into the night.”
“As soon as he gets home, he gets out his paper and pens and is drawing away until dinner.”
“Jenny? Oh, you won’t be able to get much conversation out of her. She’s in her office writing away. She’ll be hours.”

OK — so hopefully next time you hear one of these kinds of phrasal verbs, you’ll immediately understand what’s going on.

But let’s test out your knowledge!

What do these phrasal verbs mean?

Did you find this useful? Do you know any people (or raccoons) that might also benefit from this? Then BE AWESOME AND SHARE! Spread the knowledge!