So you know how to talk about the past in English. (He met a giraffe yesterday.) You know the difference between talking about general actions (I take my giraffe for a walk every day) and actions happening right now (I’m feeding the giraffe right now — I’ll call you back). You can talk about plans in the future (I’m going to visit a giraffe house tomorrow) and predictions in the future (There won’t be many giraffes in the pub at 10 o’clock).

So you can use most of the tenses.

But only the “main” verb (usually the first verb) in a sentence changes because of the tense. What if there are two verbs in the sentence?

If a verb isn’t the first verb in a sentence, then it’s probably* an “-ing” verb (I love eating chocolate), a “to verb” (I forgot to send that letter) or verb 3 (I haven’t ridden a camel).

I want to share a simple trick with you that will help you decide whether to use “-ing” or “to verb.” This trick is universal, but today let’s look at how it works after verbs (V).

The “to man” is always thinking about goals. He plans and considers the future. He’s a thinker, not so much a doer.
But we like him. Before we do something, it’s good to have a plan, right?

The “-ing lady” is all about doing things. She also thinks, like the “to man,” but when she thinks, she’s thinking about the experience, not the result.

When you learned about “-ing” and “to” for the first time, it was probably in a situation something like this:

He wants to make a massive cake.

I was wrong (it happens!). There is actually a system. We just need to ask ourselves, “Is this a ‘to man’ verb or an ‘ing lady’ verb?”

This works with most verbs.

Pushing to the future:

He hoped to buy a box for his massive cake.

Do you need to meet him soon?

Imagine travelling the world in a hot air balloon! Awesome!

I miss being a kid. I had so much fun.

Have you ever dreamt of flying?

Have a look at these examples. Why is the first example “-ing” and the second “to”?

I like to go to the dentist twice a year.

Some other verbs can take either “-ing” or “to,” but the meaning changes.

Let’s look at these verbs one by one.

Look at this picture:

Judy stopped skiing. Why? She stopped to talk to Alper.

We stop doing an action to do something else.

“-ing lady” is more nostalgic because she spends more time thinking about experiences. “To man” is more organised — he thinks about plans!

Here’s a picture of “-ing lady” being nostalgic and “to man” being organised:

When we remember doing something, we’re looking back at the past.

When we remember to do something, we’re planning for the future. It means “not to forget.”

The verb “try” is all about finding a solution to your problem. When you have a problem, you have one ultimate goal: “How can I solve this problem?”

Here’s Amanda with her problem. (We don’t know what the problem is — it’s personal!)

She’s looking into the future to the point in time when her problem is solved.

To get there what does she need to do?

That’s right! The problem is in the future, so “to man” will help her here — she’s going to try to solve her problem.

But there are lots of things she can do to solve the problem. Some of them will work. Some won’t. But she needs to try, right?

As you can see, these are the actions she needs to do to solve the problem. To solve her problem, Amanda must try asking her mother, or try paying the giraffe.

So far (until now) we’ve looked at how “to man” and “-ing lady” work when we want to use two verbs in the same sentence.

But what if she’s doing the “wanting” and she wants someone else, maybe Elvis Presley (who really liked eating), to do the “eating”?

We need to add Elvis to the sentence, right? How do we do that? Well, let’s start with the sentence from before:

Anna wants to eat all the cakes.

This works the same with “-ing” or with “to.” Just put the new person (Elvis) in front:

I want to relax! And I want Elvis to relax.

When we use the verb “need” followed by the passive:

It needs to be cooked.

…we can replace the passive infinitive part “to be cooked” with a gerund:

This house is filthy and needs cleaning.

Yeah, you can use my bike, but the tyre needs pumping.

This is a little strange because we’re using an active verb for a passive action. But that’s English! As I’m sure you know by now, English is not 100% regular.

So, as you can see, although there are different ways to use “-ing” and “to,” they usually follow the general rule: 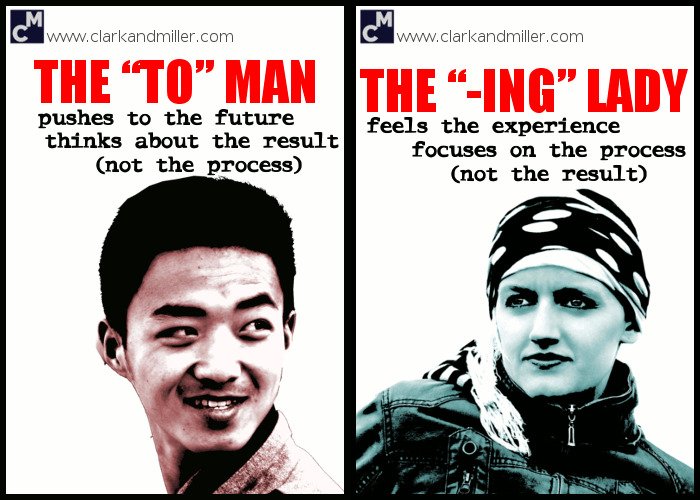 We’re going to meet these lovely people again in part 2.

If you have any questions about the “to man” and the “-ing lady,” please leave a comment and I’ll try to help you out!