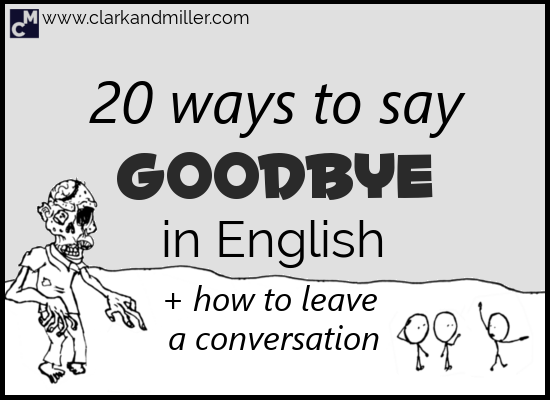 You’re about to learn 20 new words for goodbye in English. Also check out 27 Different Ways to Say Thank You (And How to Reply).

What’s wrong with this conversation?

No one in this conversation seems to know that there are lots of different ways to say goodbye in English.

I mean LOTS of ways!

How to end a conversation in English

OK. It’s very useful to know how to say goodbye in English.

But how do you fit it into a conversation?

I mean, can you just drop a “bye bomb” in the middle of a conversation? 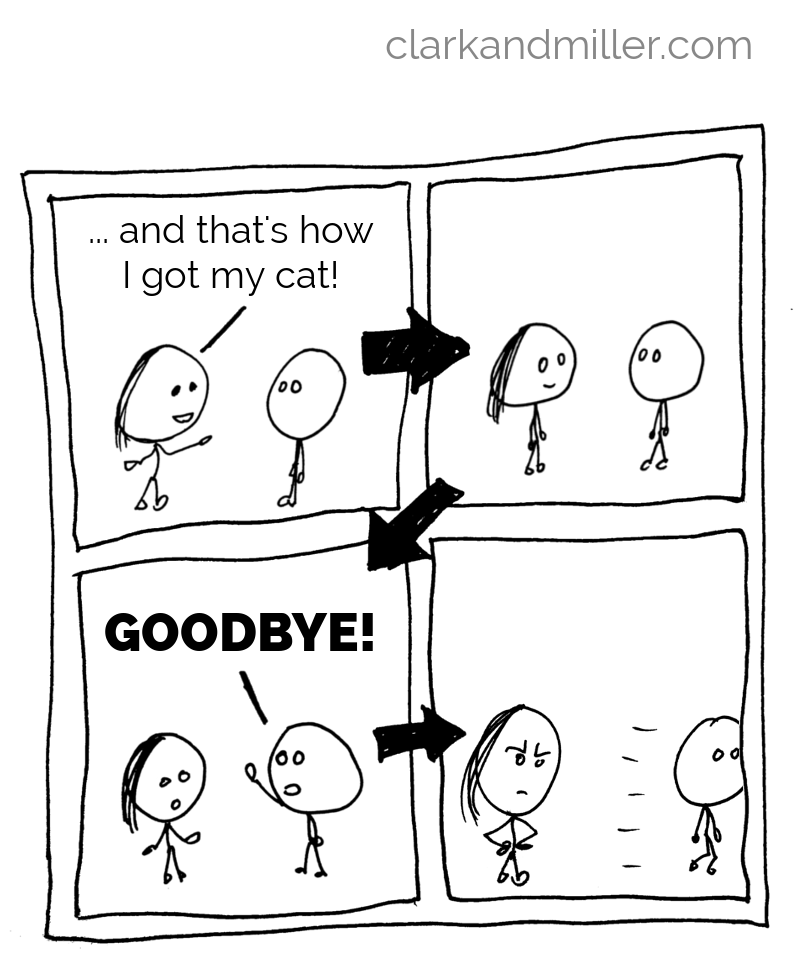 I don’t think so. That would be pretty rude, right?

I’ve noticed that we usually have what I call “pre-byes” — phrases we use to show that we’re about to leave the conversation.

We use them just before saying goodbye.

Here’s how they look:

Then we can say goodbye …

There are fun ways to say goodbye.

And there are more standard ways to say goodbye.

So here are some standard ways to say goodbye in English. 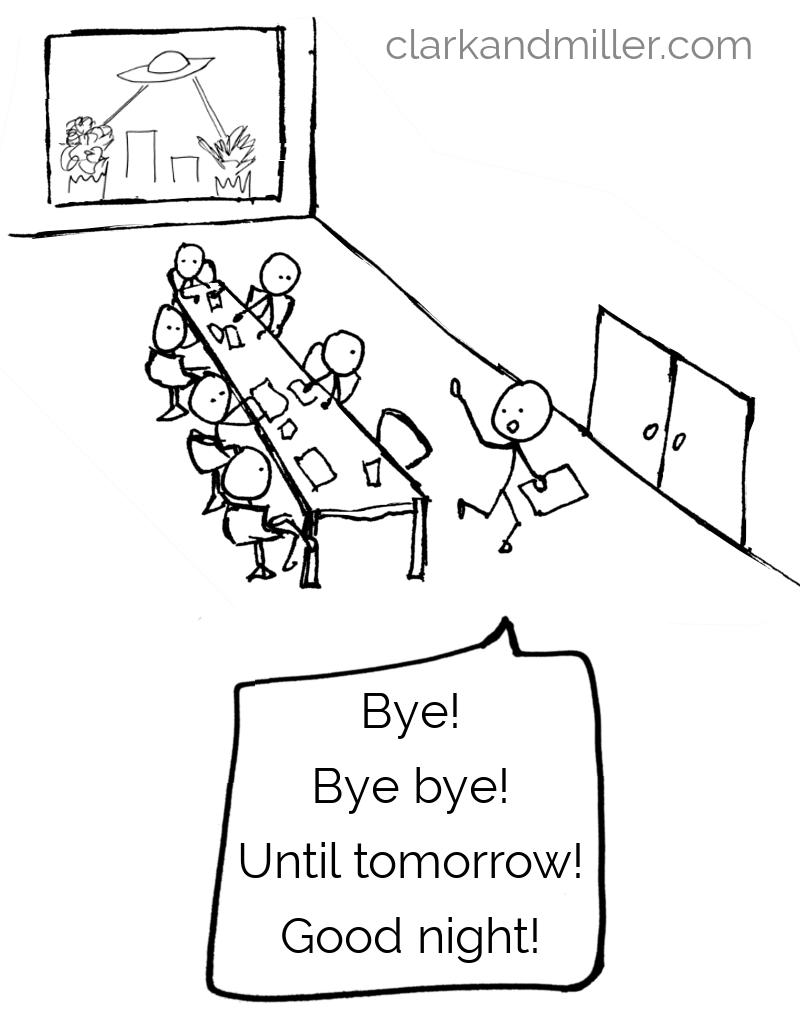 Well, why not just say it twice?

No. That would be mad.

Be careful with this one!

It’s often used with kids if you pronounce both words equally.

If you use it with adults, remember to only stress the second “bye” so that it sounds more like “bu-BYE.”

OK. Obviously, you only say this if you’re going to see the other person tomorrow.

If you say this to someone you’re never going to see again, like an air stewardess or a taxi driver, then that might be a bit confusing.

If you say it to your favourite actor when you meet him at a book signing, then that would even be creepy.

The good news is that you can change “tomorrow” for whenever it is you’re going to see them again.

So you can say “until next week” or “until Friday” or even “until later.”

This one’s nice — it shows you care but isn’t too informal or close.

We also often mix this with one of the other words on this list.

OK, a couple of things here.

This is, obviously, only used late in the evening. You know, at night.

It’s also the only “good” + time of day structure that also means “goodbye.”

When you’re with your friends, you might want to use some of these more fun ways of saying goodbye.

It kind of means “Don’t worry — this isn’t the end! We’ll meet again!”

When I was a kid we would also say, “See you later, alligator.”

Sometimes, we’d even get the reply, “in a while, crocodile.”

Oh, how we laughed.

It’s short for “see you later.”

Sometimes we’d extend this with “See ya! Wouldn’t wanna be ya!”

I don’t know. Humans are weird.

This is very casual.

It’s got a friendly, light-hearted feeling to it.

OK — so “see you later” is getting boring?

Have a good one!

This one’s rather British and is one that I use quite a lot.

I like it because it sort of means “enjoy yourself.”

It rhymes with “now.”

It’s quite funny to mix the Italian and the English like this, right?

Yep — this one definitely isn’t English.

But it kind of is because more and more people are using it to mean “goodbye.”

Maybe one day all the languages in the world will come together and become one massive mega-language.

OK. This one is very, very British and a little old fashioned.

But because it’s quite old fashioned, when we use it, we lighten the mood.

It gives us a sense of nostalgia and feels quite ironic.

Which words for goodbye are your favourites?

Let me know in the comments.

But for now, I’m saying “cheerio.”

18 thoughts on “20 Ways to Say Goodbye in English” 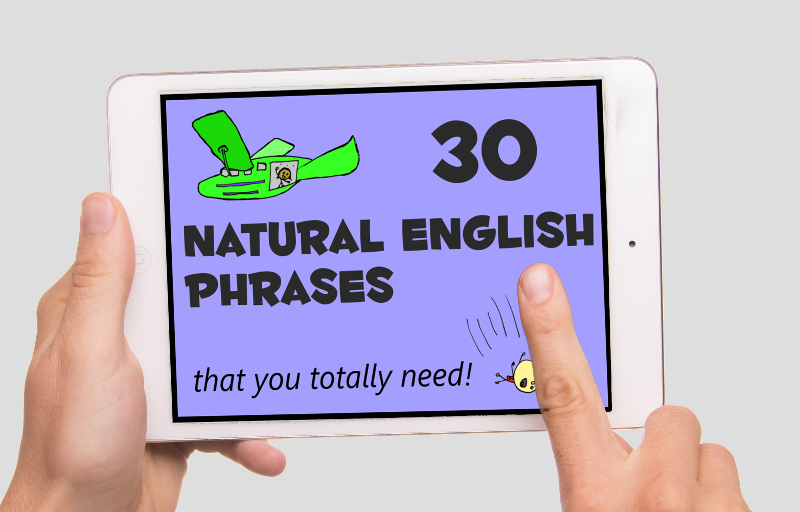 Subscribe to our newsletter to get the eBook free! Don’t worry, you can unsubscribe at any time.