This week, I’m leaving you in the capable hands of Christina from English with Christina. Hope you enjoy this post on small talk in English, and I’ll catch up with you next week. 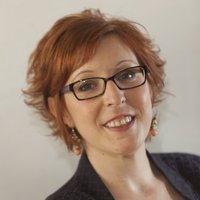 Hi, I’m Christina Rebuffet, the creator and English coach at Speak English with Christina. I make it easy for my students to become fluent in American English, and to have fun doing it. I also help them feel more comfortable in everyday discussions in English.

Want more vocabulary for everyday discussions? Click here to get my Top 10 video English lessons on essential vocabulary and grammar for small talk.

You’ve just taken your seat on a flight from Rome to Paris. Another passenger arrives and you notice his American passport. He stops next to your seat for a few seconds. Checks his ticket. And starts a conversation with you.

“Excuse me, I’m in the window seat.”
“Ah, yes.” You stand to let him take his seat, next to the window.
“Sorry, excuse me,” he continues. “Looks like it’s gonna be a full flight. Well, at least it’ll be short. You going on vacation or business?”

And you ask yourself, “Why is this guy asking me about my trip? We don’t know each other!”

If you’ve ever been to the USA, you’ve surely noticed that Americans talk a lot. They talk to almost anybody, and they talk about almost anything. It seems like they’re friends with everyone they meet.

It can seem like they talk a lot but don’t have a lot of interesting things to say. That’s small talk. And even if the subjects of discussion are quite banal, the conversation itself is certainly not!

Sharing your personal life with strangers and colleagues

Even in professional situations in the USA, it’s not rare to share personal details with your colleagues. You’ll talk about your life, your kids, the last football game you watched, your weekend, etc. You may even disagree with your boss (who you call by his or her first name) about a few “light” subjects, without upsetting the hierarchy.

If you come from a culture where interactions follow strict rules of how to interact with colleagues depending on their status, this practice of casual small talk can be destabilizing.

Small talk goes beyond office chat around the water cooler. In many cultures, when a stranger starts talking to you on the bus or in the street, it’s more common to be suspicious of this person, to keep a certain distance.

After all, you don’t know each other, and there was no reason to break the barrier of silence between two strangers who just happen to be in the same place at the same time.

But let’s look at a situation that happens frequently in the USA:

Jack and Rachel are on the bus. They don’t know each other, but they happen to be sitting next to each other. Jack starts a small talk conversation:

On the surface, this sounds like a pretty boring conversation. Jack wasn’t necessarily interested to know where Rachel was going exactly. Rachel probably doesn’t care much about Jack’s life. After all, she doesn’t even know him.

For someone from a culture where it’s normal for two strangers to sit in silence, these short exchanges can seem superficial, empty, or even invasive.

It’s not the subjects of discussion that are important, it’s the discussion itself. Why do you think so many small talk conversations start off with discussions about the weather?

In fact, small talk plays a big role in American society, both in both your personal and professional life and it’s due to the individualistic nature of American society.

American society is based on individualism. Whether you agree with the concept or not, that’s just the way it is. Respect and a sense of belonging come more from what you do, and less from who you are.

Even if you are the director of a company founded by your great great grandfather, you’ll have to prove your legitimacy if you want the employees to see you as a true leader, someone they respect, and not just someone they obey.

The sense of belonging to a group is not automatically established, because individualism is stronger than collectivism for many Americans. That means that you have to make your own place in the group and show that you belong in the group. This happens, in part, through small talk.

These little discussions are also how Americans reinforce the notion of equality among two people. This is one reason why it’s so common for Americans to call each other by their first names, where, in other cultures, a certain degree of formality would be required. For example, through the use of formal and informal versions of “you” or the use of titles to address superiors (Mr. Professor Doctor Schmidt, for example).

By showing that you are open to others through short, informal discussions, you show that you accept them as a person, that you do not feel you are superior before you get to know them. After all, even a young guy dressed in jeans and a hoodie could be the founder of a multi-billion dollar company!

For many Americans, trying to dodge small talk through silence or one-word responses can be perceived as impolite, cold, distant, even rude. If you totally ignore the other person, it’s, in a certain way, a form of rejection.

Does this mean that all Americans love to make small talk with everyone they meet? No. Like in any society, every individual is different. And there are lots of Americans who simply don’t enjoy small talk but feel obliged to do it.

And some people just don’t bother. But these people tend to be seen as “just not in the mood to talk” by someone who tries to engage in small talk only to be met with short abrupt responses. The norm is to make a bit of small talk.

To talk or not to talk?

If you’re traveling in the USA, if you live in the USA, or even if you just work with Americans, don’t hesitate to “break the ice,” as we say. There’s a good chance that the person will respond by continuing the discussion in a pleasant way, happy to exchange a few words.

If they don’t feel like talking, don’t take it personally. Some people just don’t enjoy small talk, and it’s not your fault. But it’s worth trying! You’ll get an opportunity to practice English, you may learn something, or maybe even make a useful business contact.

How can you start a conversation with a stranger?

Let’s look at 3 situations where you can easily make small talk with a stranger.

If you’re traveling, it’s quite easy to use the shared context to break the ice. Like at the beginning of this article, something as simple as:

Excuse me, I’m in the window seat

…makes a first connection. After you take the time to settle into your seat, you can make a comment about the flight:

…if there are a lot of people in the plane.

Looks like it’s going to be an empty flight

…if there are not many people on the plane.

Then, you can volunteer some information about yourself, or make a general comment about the situation:

I’ve got a long trip. Got another connecting flight after this one.

So I guess now we just have to sit back and relax.

And to see if the person wants to continue the discussion, ask an easy question, like:

Where are you traveling to?

Do you fly very often?

This will allow you to see if the person is interested in making conversation or not. If they offer information about themselves, if they develop their answers, and if they ask questions in return, this indicates that they’re happy to continue the conversation.

If, however, they give short answers, avoid making eye contact, or seem to be occupied organizing their affairs, this indicates that they’re not very interested in making small talk. You can just respond to their short answer with a polite “Mmmhmm” and leave the conversation there.

This technique can also work in a social situation, like a party or networking event. Let’s imagine you’re at the buffet table. That’s always a good place to start conversations with strangers, as there’s an easy, obvious subject: food!

As before, you can start by saying something about the shared context. For example:

Those mini-quiches were really good.

Then offer some quick information about yourself:

I don’t think I’ve tried those yet.

I had one earlier. I think they’re spinach and ricotta.

And then invite the other person to continue the conversation by asking a question:

Do you know what’s in them?

(and then pass the person a mini-quiche if they say yes).

Again, if the person wants to accept the invitation to make small talk, they’ll continue the discussion. Perhaps they’ll say something more about the food, or even ask you a question about why you’re at the event, where you’re from, who you know at the party, etc.

If they’re not interested in making small talk, they’ll politely respond to your questions but won’t develop the discussion or volunteer information. In that case, just take your mini-quiche and go find someone else to talk to.

Small talk in any situation

This one is not connected to any specific environment, and you can use it anywhere because you’ll start by complimenting the other person.

Do you mind if I ask you where you got it?

And then the other person has the opportunity to tell you where they got the item, tell you about who gave it to them if it was a gift, or about the shopping adventure they had when they bought the item.

Just be careful to compliment their clothes or accessories, not their physical appearance. It can very uncomfortable if a stranger says something like “You have beautiful eyes.”

Try it for yourself!

Now that you have the techniques, I’d like to challenge you to try them and see what happens. If the other person is happy to make small talk, great! You’ll have a great opportunity to practice your English.

If they don’t want to make small talk, no problem. You will have exercised your courage in approaching strangers, and that’s a victory. Like I said earlier, don’t take it personally if the other person doesn’t want to talk. They might just be having a bad day.

And if you’re still nervous, here’s a technique that my students have told me really works: Imagine that you already know the person. Imagine that the other person is a friend and you haven’t spoken to them in a long time. This is your opportunity to catch up with your old friend! It’s a little like a Jedi mind trick, but it works. Think of the other person as a friend, and someone you already feel comfortable with, and you’ll feel less nervous.

Most importantly, have fun!