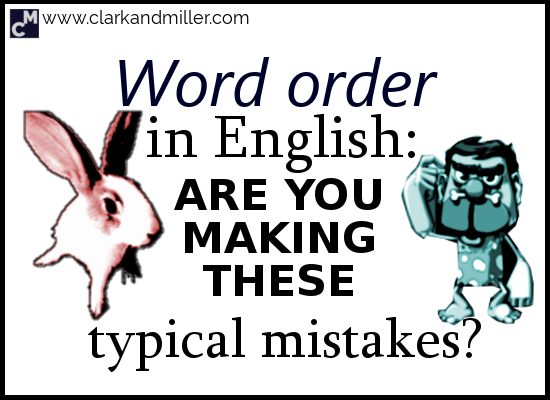 One of the most common mistakes I hear from my students and friends is getting the word order wrong in English.

Why is this important?

Word order is really, really important in English and sometimes can change the whole meaning of a sentence.

Here are the two most common word order mistakes I hear.

Are you making these mistakes, too?

If so, I’m going to show you how to fix them, and you can thank me. With magic cakes, please.

A long, long time ago, I wrote a short post about how you can fix some of your most common English problems with one simple trick.

Basically, we can look at sentences in colours.

So for example, you can divide the sentence “That rabbit attacks people” into three parts:

The red part is the verb and the blue parts … aren’t.

With this “blue-red-blue,” we can make a basic sentence.

But sometimes we want to add “extra information” to a sentence.

So instead of saying:

I met Charles Dickens in my dream last night.

The extra information (“in my dream last night”) isn’t grammatically necessary, but it might stop people from thinking you’re a bit mad.

In a lot of languages, we can just put the extra information anywhere we like.

Usually, the most natural place to add extra information is at the end of a sentence:

And sometimes at the beginning of the sentence:

I hear this one a lot.

To solve this, we need to go back to “blue-red-blue” (and sometimes black) thinking.

So, remember I told you that most sentences are “blue-red-blue”:

And that if we want to add extra information, it usually goes at the end:

Or at the beginning:

Well, we also have another type of extra information, which can break the “blue-red-blue” rule.

I call them “VIP adverbs” — that’s because they’re the only words that can go in the middle of “blue-red-blue.”

But what are they?

They include adverbs that come from adjectives:
Quickly, deftly, sexily, etc.

They can also include time adverbs:
Suddenly, eventually, immediately, etc.

And some other types of adverbs:
Only, just, also, really, etc.

There are a few one-word adverbs that aren’t VIP adverbs. Common ones include:
Here, there, today, tomorrow, outside and maybe.
These ones usually go at the end of the sentence.

But where do VIP adverbs go exactly?

In most languages they go here:

But not in English, of course.

Because English likes to be “different” and uncooperative. Or at least it seems like that, right?

In English, they go right in the middle:

The VIP adverb goes right in the middle:

So that’s why we say:

It gets a little tricky when we look at one-part verbs:

Where’s the auxiliary? It’s not there!

Actually, it is there. It’s just invisible:

Confused? Let’s take a step back. Click here for a quick overview of auxiliaries.

In any sentence with a verb in it, the auxiliary is between the subject and the verb.

Usually you can see it:

I can see him!

Sometimes you can’t see it, but it’s there:

The easy way to find the auxiliary? Just use the question form – it’ll be the first word of the question:

Is he eating giraffe soup again?

Can you see him?

Do you live here?

Have they even looked at the report?

Did she meet him at an elephant factory?

So where does the VIP adverb go?

You guessed it! Right in the middle.

What do I mean by “non-action” verbs?

Here are a few examples:

He was a pig, but he’s much better now.

We’re here. Where are you?

All of these sentences use the verb “be” (am, is, are, was, were) without another verb. Notice that there’s no real “action” in the sentences.

I kind of consider “be” more of a “half verb” (when it’s used this way). It doesn’t really do anything, right?

And it’s all by itself in the red there. Without any friends:

As you can see, when there’s no other verb, “be” is in the first of the two red parts.

So where does the VIP adverb go?

The same place as always — right in the middle of the “blue-red-blue.”

So there we are — two classic mistakes that, in a way, come from the same problem.

How much do you remember? Let’s see. Can you fix these sentences?

Did you find this useful? Do you know any people (or squirrels) that might also benefit from this? Then BE AWESOME AND SHARE! Spread the knowledge!

8 thoughts on “Word Order in English: Are You Making These Typical Mistakes?”