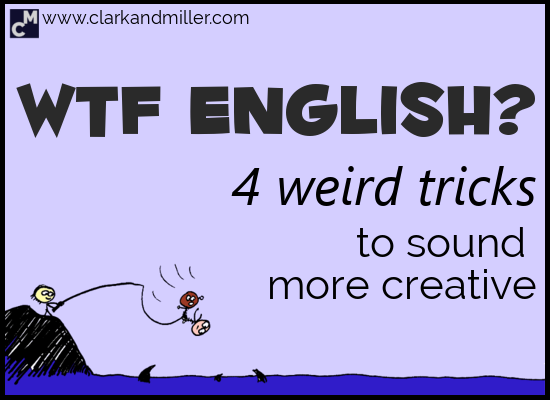 It’s not that some words look the same forward as they do backwards — like “racecar.”

Though that is pretty cool.

It’s not that some words have two opposite meanings at the same time — like “literally.”

And that’s pretty cool, too.

No, what I love about language is that people play with it all the time.

I was talking to one of my French students about this recently.

She told me that it’s quite popular in France for young people to invert words.

So instead of saying “merci,” they say “cimer” (pronounced “si-mer”).

How fun is that?

We love playing with language, and we love being creative with it.

But do we do it just for fun?

No, fun is just one reason.

When we play with language like this, there are two other things we’re doing:

So today, I thought I’d show you four of my favourite ways of being creative in English and how we can communicate extra meaning.

“Oh, Barry? He was late again. This time he took a shortcut, fell into the river and ended up in Barnstable. Because Barry.”

This sounds weird because Barry’s such a weirdo, right? 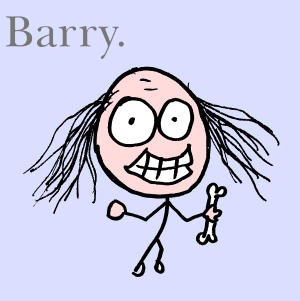 So, when you were studying English grammar, you might’ve learned something like this:

“Because” + sentence
“Because of” + noun

“Because Barry was here.” (sentence)

“Because of Barry” (noun)

The formula here is:

We went straight from “because” to the noun.

Much to the horror of your high school English teacher, who reads this blog and now looks like this:

OK. Let’s compare some example sentences with “because.”

“Because of Barry, we’re going to be having the next broccoli festival in the park, not at the beach.”

First of all, this sentence is pretty neutral.

All it’s saying is that Barry is the reason we’re doing the next broccoli festival in the park.

It doesn’t let us know whether we think it’s a good thing or a bad thing or whether Barry usually makes us change the location of the festival or anything like that.

Secondly, “because of” is at the beginning of the sentence.

It doesn’t have to be, you could also put “because of” at the end of the sentence:

“We’re going to be doing the next broccoli festival in the park, not at the beach, because of Barry.”

And that’s fine, too. It’s flexible.

“Oh Barry? He was late again. This time he took a shortcut, fell into the river and ended up in Barnstable. Because Barry.” 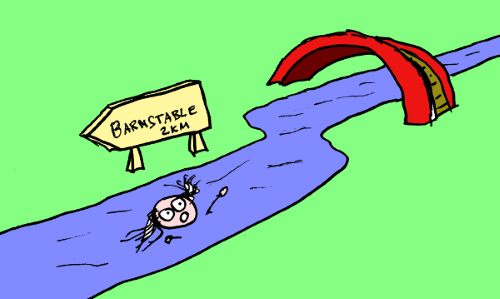 Unlike the first sentence, this one has a lot of extra meanings and signals going on.

When we use the “because + noun” structure, what we’re doing is:

Just remember, this only works at the end of the sentence. It’s an afterthought.

“Man. That journey was only 20 km, but I had to take two metros, a minibus, a train, another minibus and another metro — most of the time with my face in someone’s armpit. Because Istanbul!”

“Now cat aliens have invaded India, Mick Jagger has decided to buy the moon and Barry has successfully declared a new republic just outside Barnstable. Because 2020.”

“My cat loves being stroked up to three times right at the back of her left ear. If you touch her any longer, or anywhere else on her body, she’ll kill you. Because cats.”

“Because” + noun is used in the title of linguist Gretchen McCulloch’s awesome book, Because Internet: Understanding the New Rules of Language and the fascinating linguistics podcast Because Language. Both highly recommended for linguistics nerds.

“No way! I was sitting in this very chair!”

So you probably already know that you’re supposed to use “very” with adjectives (“very unpredictable”) and sometimes modifiers (“very few giraffes left”).

The idea with “very” is that it’s supposed to show how strong the adjective (or modifier) is. It’s about something being bigger or more friendly or more dangerous or whatever.

So when you have the sentence “No way! I was sitting in this very chair!”, what on earth is happening?

“Chair” is a noun! How can it be more chairy or less chairy? It’s just a chair. It can’t be a “very chair” — especially when we’re not comparing it to another chair.

Like most of today’s features, the formula here’s pretty simple:

It’s “very” with a noun — but the important thing here is that the noun is defined somehow with “this” or “that.”

Or with “the” and a relative clause … but we’ll get to that in the examples.

“I think he was sitting in this chair.”

Again — the first example is a neutral one.

This sentence has no hidden meaning or signals.

“He was sitting in this very chair.”

It very strongly identifies the chair.

It’s like you’re saying, “It was EXACTLY THIS chair! And no other!”

And like the “because Barry” example above, you’re bonding with the person you’re speaking to.

It’s like you’re saying, “Isn’t that crazy? What are the chances? Let’s be amazed together for a bit.”

“… and it was at that very moment he decided to quit his job and become a pirate.”

“Ladybird psychology? That’s the very subject that I did my thesis on!”

“We made the disaster-predictor to avoid this very situation!”

“Sorry I couldn’t come to the party. I had all the illnesses.”

Obviously, the grammar here is fine — that’s not what’s making it sound weird.

No — this is a question of meaning.

If you tell me that you couldn’t come to the party because you had “all the illnesses,” I wouldn’t believe that you had literally every single illness in the world.

If you had all the illnesses, you’d be dead. And possibly green.

But of course, that isn’t what you’re trying to say. All you mean is that you were very ill.

Of course we use “all the” with a plural noun in everyday English — it isn’t particularly unusual.

You could say, “He ate all the cakes,” and that would be fine. Because he did eat all the cakes. And now he’s not feeling great.

The meaning of the sentence, in this cake example, is literal; it’s direct. There were 12 cakes, and he ate all of them.

But if you say “That guy has all the moves,” then you’re not saying that he went around the world collecting moves off people.

It’s a way of exaggerating in order to emphasise what you’re saying.

It’s the same with:

“Sorry I couldn’t come to the fish bowling party. I had all the illnesses.”

It’s just a way of saying that you were really ill. And it sucked. In fact, it sucked so much that you couldn’t come to the fish bowling party.

And everyone loves fish bowling parties.

“Wow! Another scandal? Seriously — that president does all the crimes!”

“Have you been to Todd’s studio? Seriously, he’s got, like, all the guitars!”

“I keep reading Sam’s Facebook feed, and I just keep making all the facepalms.” 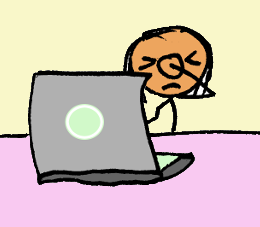 This way of using “all the” + plural noun may have its origins in the brilliant Hyperbole and a Half comic This is Why I’ll Never be an Adult.

What is it and how does it work?

OK. This category is slightly different and can even be a bit of a cliché in the world of creative English.

But here’s the thing.

Rhyming slang is just soooooo creative that I couldn’t leave it out.

But remember — this is not something you want to use in a meeting at work with your international colleagues.

And, although I like to keep Clark and Miller internationally focused, this is generally a British thing.

So, if you’ve got a colleague from the UK who you get on with really well, then this would be the time to impress them!

Or you can just use it to confuse Americans. Which is always fun.

OK. Here’s how it works:

Let’s take the phrase “have a look at” and the simple question:

“What are you having a look at?”

Aaaaand, we also have the phrase “butcher’s hook.” You know — the hook that butchers hang their dead animals from before they cut them up.

So, with rhyming slang, you can replace the word “look” with “butcher’s hook.” And then delete the word “hook.”

And our original sentence, “What are you having a look at?” now reads:

It doesn’t. That’s the point — it means exactly the same thing as the original.

Well, we do it for the same reason that my French student’s friends say “si-mer” instead of “merci.”

It’s fun, it’s creative and it creates a sort of group identity.

So, if you use these with the right people (meaning people who can actually use rhyming slang), they will love you forever!

“Oh come on. Let’s get out of the house. Fancy a Ruby Murray?”
Ruby Murray = curry

“Have you seen his Barnet since he got back from the salon? He looks ridiculous!”
Barnet = Barnet Fair (an annual horse festival) = hair

There we have it! The creativity of people playing with English.

And sure! Why not have fun with it?

But what about the other languages you know?

I’m sure people do creative and weird things with your first language. Can you give some examples?

Tell me about it in the comments! I’d love to hear about it.