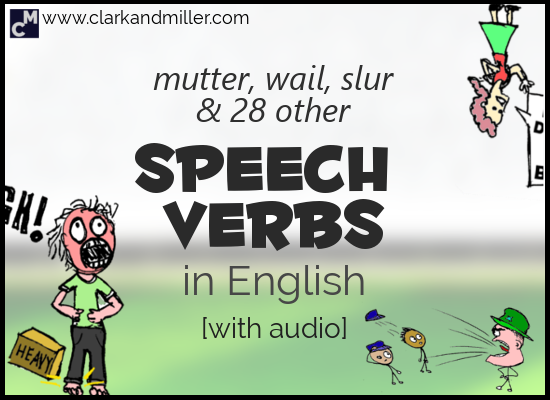 Speaking is amazing, don’t you think?

Words and phrases come out of our mouths — they communicate meaning, and we humans understand each other (well, sometimes)!

But there are countless different ways of speaking.

Sometimes, we express ourselves by speaking quietly, loudly, angrily, unclearly or enthusiastically.

And sometimes, we can express ourselves really well without using any words at all — just sounds.

When we describe what someone said, of course we can say, “He said …” or “She said …”

But there are so many alternatives to “say” that describe the many different WAYS of speaking.

Here are some of the most common ones.

Words for talking loudly in English

Sometimes you just need to say something LOUDLY!

Maybe you’re shouting at your kids to get off the climbing frame and come inside before the storm starts.

Or perhaps you’re just one of those people who just shout a lot of the time when you speak. And that’s fine. I’ve got a friend like that. He says it’s because he’s the youngest kid in a family full of brothers and sisters — he had to shout to make sure people heard him. And he still shouts.

Screaming is similar but usually higher in pitch and full of fear or pain or total fury, like when you’ve just seen a ghost or when you’ve dropped a box of bricks on your foot. 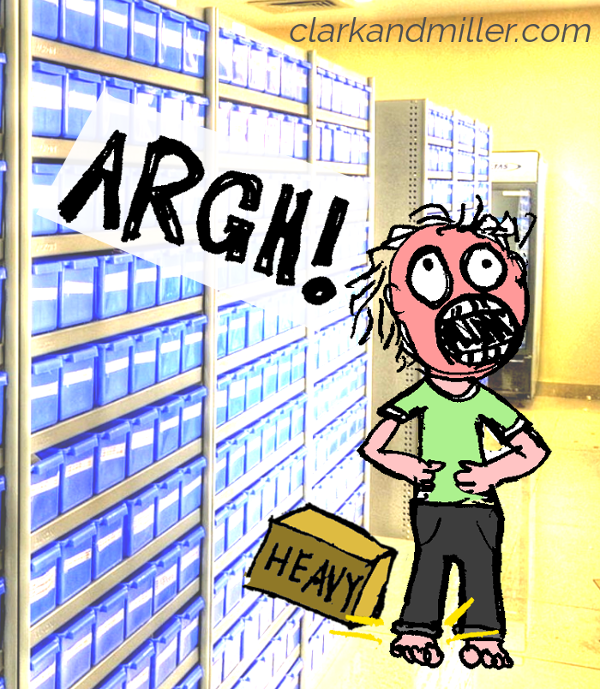 “Stop yelling at me! I’m sorry! I made a mistake, but there’s no need to shout!”

When I hear these words, I always imagine something like this: 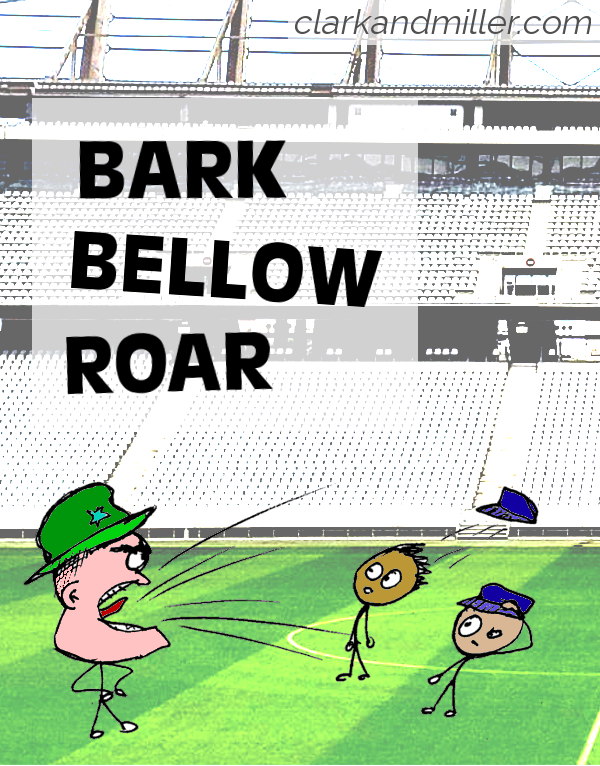 These verbs all feel rather masculine, and you imagine them in a deep voice.

I always think of an army general walking around the room telling people what to do.

That’s probably why we have the phrase “to bark orders at someone,” which means to tell people what to do in an authoritative, loud and aggressive way.

“I can’t stand that William guy. He’s always barking orders at everyone!”

Ooooohhh …. These do not sound nice.

These are the sounds of a car stopping suddenly.

Or the sound a cat makes when you tread on her tail.

Or very overexcited kids at a birthday party after eating too much sugar.

These verbs are high pitched and sometimes painful to hear.

“When I heard her shriek, I ran to the kitchen to see what it was. Turned out it was just a mouse.”

“As soon as she opened the box and saw the present, she let out a squeal of delight!”

Wailing is also high pitched, but not so full of energy.

It’s usually full of sadness or even anger.

When I think of someone wailing, I imagine someone completely devastated — very sad — after losing someone they love.

You get a lot of wailing at funerals.

“It’s such a mess!” she wailed desperately. “It’ll take ages to clear up!”

Words for speaking quietly in English

When we talk about people speaking in quiet ways, for some reason, we often use words that we also use for animals.

In a way, this is useful, because we can immediately get a feel for the sound of the word.

This is the sound that snakes make.

Sometimes you want to be both quiet AND angry.

Maybe someone in the theatre is talking and you can’t hear what Hamlet’s saying, so you hiss at them to shut up.

Or maybe you’re hanging out with Barry and Naomi when Barry starts talking about Naomi’s husband, who she split up with last week.

Then you might want to hiss this information to Barry so that Naomi doesn’t hear.

But Naomi wasn’t listening anyway — she was miles away staring into the distance.

“You’ll regret this!” he hissed, pointing his finger in my face.

To be fair, this one’s a little complicated.

Whimpering is a kind of traumatised, uncomfortable sound.

If you think of a frightened animal, you might hear it make some kind of quiet, weak sound that shows it’s in pain or unhappy.

Or if you think of a kid who’s just been told she can’t have an ice cream.

“Please! Don’t shoot me!” he whimpered, shielding his head with his arms. 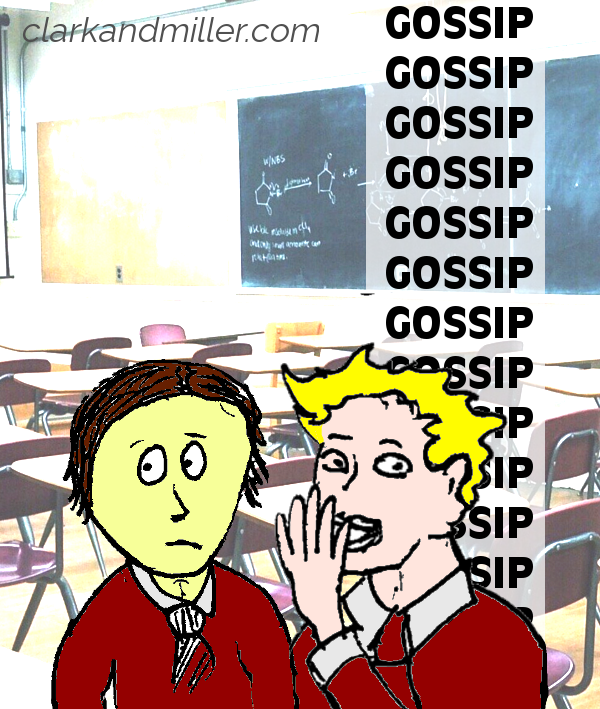 Whispering is when you speak, but you bypass your vocal cords so that your words sound like wind.

Which is a pretty cool way to look at it.

This is a really useful way of speaking if you’re into gossiping.

“Hey! What are you whispering about? Come on! Tell us! We’ll have no secrets here!”

Words for speaking negatively in English

Ranting means to speak at length about a particular topic.

However, there’s a bit more to it than that.

Ranting is lively, full of passion and usually about something important — at least important to the person speaking.

Sometimes it’s even quite angry.

We probably see rants most commonly on social media — especially by PEOPLE WHO LOVE USING CAPS LOCK AND LOTS OF EXCLAMATION MARKS!!!!!!

“I tried to talk to George, but he just started ranting about the tax hike.”

“Did you see Jemima’s most recent Facebook rant? All about how squirrels are trying to influence the election results with memes about Macaulay Culkin.” 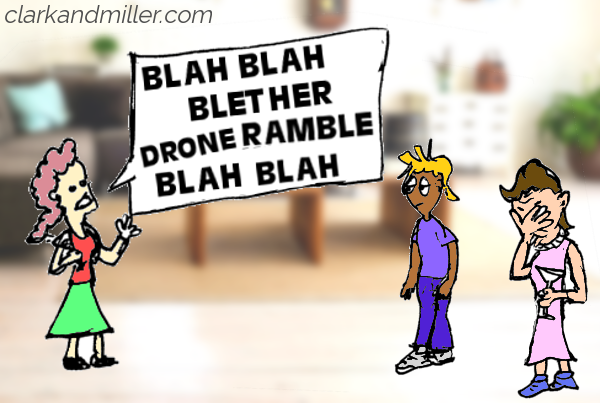 These words all have very similar meanings.

First of all, when someone babbles (or blabbers or blathers or drones or prattles or rambles), it means they are talking for a long time.

And probably not letting other people speak.

And, importantly, about nothing particularly interesting or important.

You know the type of person, right?

You run into a friend or someone you know.

All you do is ask, “How’s life?” and five minutes later, you’re still listening to them talking about their dog’s toilet problems.

They just ramble on about it for ages.

These verbs are often used with the preposition “on.”

That’s because “on” often means “continuously” in phrasal verbs.

So when someone “drones on,” it means they just talk for ages about nothing in particular.

“You’re meeting Aunt Thelma this evening? Oh, good luck! Have fun listening to her drone on and on about her horses.”

There are some small differences, though.

When you groan, you probably don’t even say any words. Instead, you just complain with a sound.

When you grumble, you complain in a sort of angry or impatient way. It’s not a good way to get people to like you.

Finally, moaning is complaining, but without much direction.

You know the feeling, right?

Things are unfair, and stuff isn’t working, and it’s all making life more difficult than it should be.

We might not plan to do anything about it, but it definitely does feel good to just … complain about it.

Well, you get the idea.

If you’re frustrated with things, maybe you just need to find a sympathetic ear and have a good moan.

“Pietor? He’s nice, but he does tend to grumble about the local kids playing football on the street.”

Words for speaking unclearly in English

These verbs are all very similar and describe speaking in a low and unclear way, almost like you’re speaking to yourself.

Have you ever been on the metro or the bus and seen someone in the corner just sitting and talking quietly and a little madly to themselves?

That’s mumbling (or murmuring or muttering).

The differences are just in what type of quiet and unclear speaking you’re doing.

When someone’s mumbling, it means they’re difficult to understand. You might want to ask them to speak more clearly.

Murmuring is more neutral. It might be someone praying quietly to themselves, or you might even hear the murmur of voices behind a closed door.

Finally, muttering is usually quite passive-aggressive and has a feeling of complaining to it.

“I could hear him muttering under his breath after his mum told him off.” 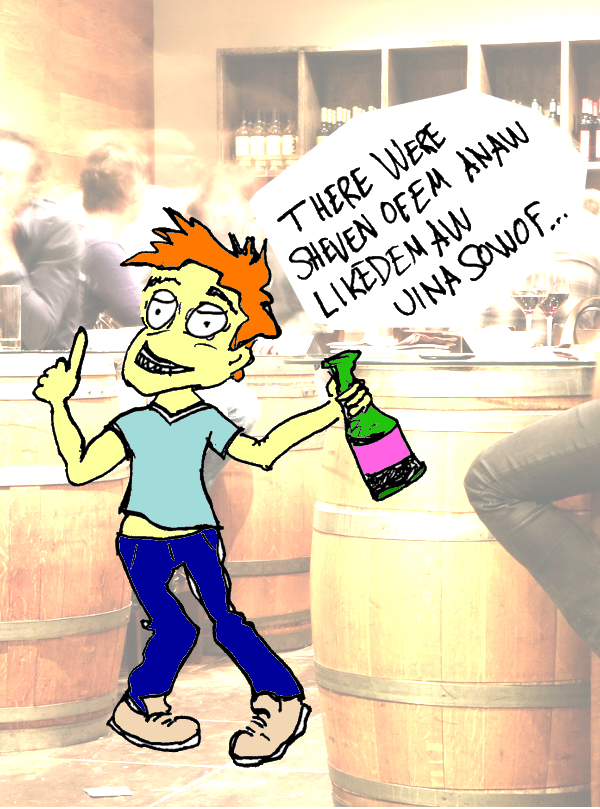 How can you tell if someone’s been drinking too much booze (alcohol)?

Well, apart from the fact that they’re in the middle of trying to climb the traffic lights holding a traffic cone and wearing grass on their head, they’re also slurring — their words are all sort of sliding into each other. Like this.

This can also happen if you’re super tired.

“Get some sleep! You’re slurring your words.”

For some people, this is a speech disorder, and the person who’s doing it can’t help it.

If you’ve seen the 2010 film The King’s Speech, you’ll know what I’m talking about.

This can also happen when you’re frightened or angry or really, really excited — and especially when you’re nervous.

That’s when you stammer your words.

Other words for speaking in English

If you drawl (or if you have a drawl), you speak in a slow way, maaakiiing the voowweeel sounds loooongeer thaan noormaal.

Some people think this sounds lazy, but I think it sounds kind of nice and relaxed.

Some regional accents, like Texan and some Australian accents, have a drawl to them.

“He was the first US President who spoke with that Texan drawl.”

“Welcome to cowboy country,” he drawled.

That’s my impression of a dog there.

If you ever go cycling around remote Bulgarian villages, then you’re probably quite familiar with this sound.

There are dogs everywhere, and sometimes they just bark.

But sometimes, before barking, they growl — they make that low, threatening, throaty sound.

And it means “stay away.”

But people can growl, too, especially if they want to be threatening.

“‘Stay away from my family!’ he growled.”

We can use these speaking verbs in the same way we use “say.”

For example, if someone says “Get out!” loudly, we can say:

However, most of the verbs we looked at today are also used as nouns. (You might have noticed in some of the examples.)

For example, if we want to focus on the fact that he was angry when he shouted, and not the words he used, we can say:

“He gave a shout of anger.”

We can use these nouns with various verbs, usually “give” or “let out.”

“She gave a shout of surprise.”

“He let out a bellow of laughter.”

“I heard a faint murmur through the door.”

There you have it: 30 alternatives to “say.”

So next time you’re describing your favourite TV show or talking about the dramatic argument you saw the other day, you’ll be able to describe it more colourfully and expressively.

8 thoughts on “Words for Speaking: 30 Speech Verbs in English (With Audio)”